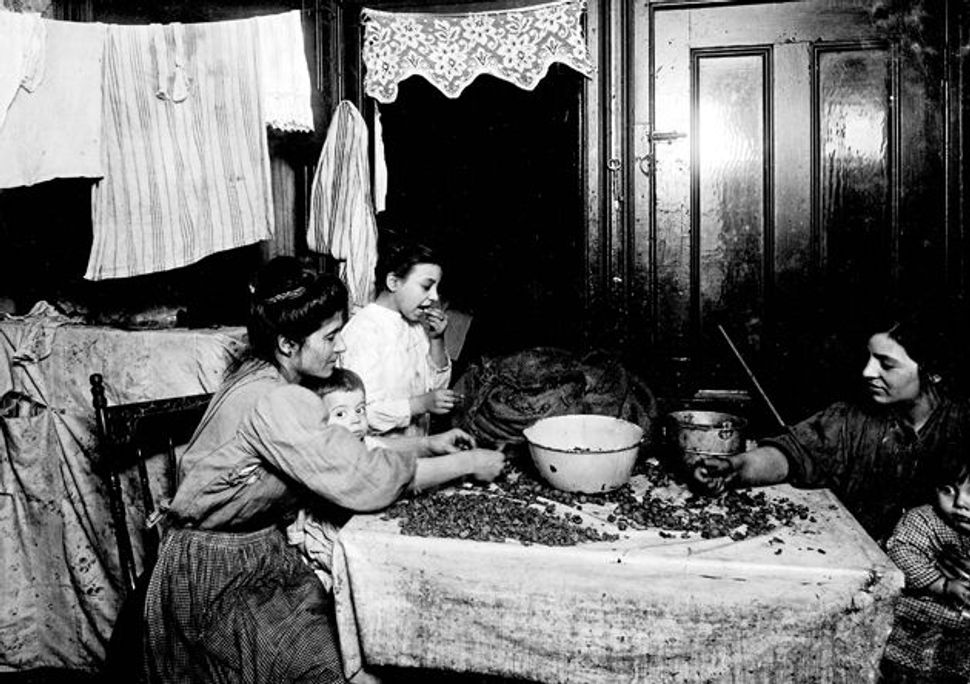 Many Faces: The kitchen served multiple roles in New York tenements in the late 19th and early 20th centuries. Here, members of an immigrant family shell nuts at their kitchen table to earn money. Image by COURTESY OF THE NEW YORK TRIBUNE

When 97 Orchard Street on Manhattan’s Lower East Side welcomed its first families in 1863, tenants like Wilhelmina Glockner had to haul tubs of water for each day’s cooking and cleaning up the building’s narrow staircase.

Even without iceboxes or running water, the kitchens in the cramped tenements were the heart of each home.

More than a place to cook and eat, the kitchen was a workspace where women and children earned pennies shelling nuts or sewing. It was a laundry room and a place to bathe, even a bedroom for boarders.

Nearly 7,000 people called 97 Orchard Street home during its 70-year lifespan, and telling their stories is the sacred charge of the Lower East Side Tenement Museum.

Focusing on a handful of families from Germany, Italy, Ireland and Prussia, museum tours eloquently convey the story of immigrant life in the mid-19th and early 20th centuries, when a veritable ocean of newcomers flooded into lower Manhattan in pursuit of America’s promise.

So last March, when museum officials broke ground on their most ambitious expansion to date — construction of a new visitors center, with a bookstore and classrooms for touring schoolchildren — the blueprints prominently featured a demonstration kitchen where guests can truly taste tenement life.

Jane Ziegelman, a food writer and teacher from Brooklyn, will run the new culinary program, which is expected to open in late fall or early winter. And in anticipation of that task, Ziegelman has written the book “97 Orchard: An Edible History of Five Immigrant Families in One New York Tenement” (Smithsonian Books/HarperCollins), which comes out in June.

Just as museum tours focus on individual families who came from different parts of Europe in distinct decades, Ziegelman concentrates her story on the pantries of those families. Much of her research was done in the museum’s archives.

“The book is definitely inspired by the museum,” museum spokeswoman Kate Stober said, but it is not being published as a museum fundraiser. It is simply a tribute to the women (and men) who preserved the recipes of their ancestors.

Ziegelman tells us how much oatmeal and flour immigrants packed to cook for themselves in steerage before 1848, when tighter regulations required ships to provide provisions. And she describes the meals at Ellis Island.

For the more than 1 million Jews who immigrated to the United States between 1900 and 1910, Ziegelman writes, the culinary challenges at sea were multiplied by the scarcity of kosher foods. Among those who brought their own provisions, she explains, “one very common food was thick slices of zwieback-like bread that had been dried in the oven to keep it from spoiling…. For protein, they packed dried fish and salami.”

Once they passed inspection at Ellis Island, freshly landed Jews could buy tinned sardines and kosher sausages at the lunch stand there, Ziegelman writes. But for those who were detained, kosher food was not available until 1911, when the Hebrew Immigrant Aid Society intervened with authorities.

The kosher menus from 1914 show that boiled eggs, bread and coffee were served at breakfast; potato soup, goulash, vegetables and bread for the midday meal, and pickled herring, fresh fruit, and bread and butter for supper.

In the face of pressure to assimilate in the New World, food from the Old World became a source of ethnic or national pride for immigrants, Ziegelman says in the book. That was especially true for Jews, whose core belief in the sacredness of food was a linchpin.

In tenements, meal preparation was a challenge that required effort from every member of the family. Children scavenged wood for the stove, and mothers stretched every penny, shopping at pushcarts where vendors were willing to sell just half a parsnip for that day’s soup or stew.

“Tenement housewives were like human freight elevators,” she writes in the book, “hauling groceries, coal, firewood and children up and down endless flights of stairs.”

beef with horseradish, stuffed pike and gefilte fish were shared among tenants from different lands. And some dishes even worked their way into the new American menu.

Ziegelman came to the museum’s attention after she founded a hands-on educational program called Kids Cook! which offers children classes in basic cooking and pastry skills. She has also taught in New York public schools and libraries, introducing children to the vast array of ethnic cuisines in the city.

In the culinary program, Ziegelman will likely bring in guest chefs and have all-ages cooking programs. Although the demonstration kitchen will not be kosher, she anticipates holding some programs in nearby kosher facilities.

The building at 97 Orchard Street, now a National Historic Landmark, will remain, said Morris Vogel, museum president. But for the expansion, the group bought another old tenement at 103 Orchard, across from the current visitors center, in a storefront the museum has been renting.

“We already had kitchens in the tenement apartments, but we wanted to go a step further,” Vogel said in a recent telephone interview with the Forward, “because food is a central ingredient in the story of immigration.

“We get 170,000 visitors a year,” Vogel said, “and we want them to understand what their forbearers went through in negotiating the terms of their lives in the New World. In that way, we develop an understanding of how important immigration has been in the development of this country.”

“Food,” he said, “offers another dimension into that all-American story.”

Dianna Marder is a staff writer at the Philadelphia Inquirer.

A Recipe From the Past

Jewish cooks on the Lower East Side made a deeply flavored soup, with beans, onions, carrots, celery and barley, that came to be called krupnik, Jane Ziegelman writes in her forthcoming book, “97 Orchard.” The book contains about a dozen recipes, preserved with sparse details. Among the recipes is this gem from the 1940 “Jewish American Cook Book,” by Regina Frishwasser, who in the 1930s edited a regular cooking column (in Yiddish) in the Jewish Daily Forward, featuring recipes sent in by readers. Below is an excerpt:

Fry 1 minced onion in 2 tablespoons of butter until golden brown, then add to the soup.

For more recipes from the pages of “97 Orchard” click here