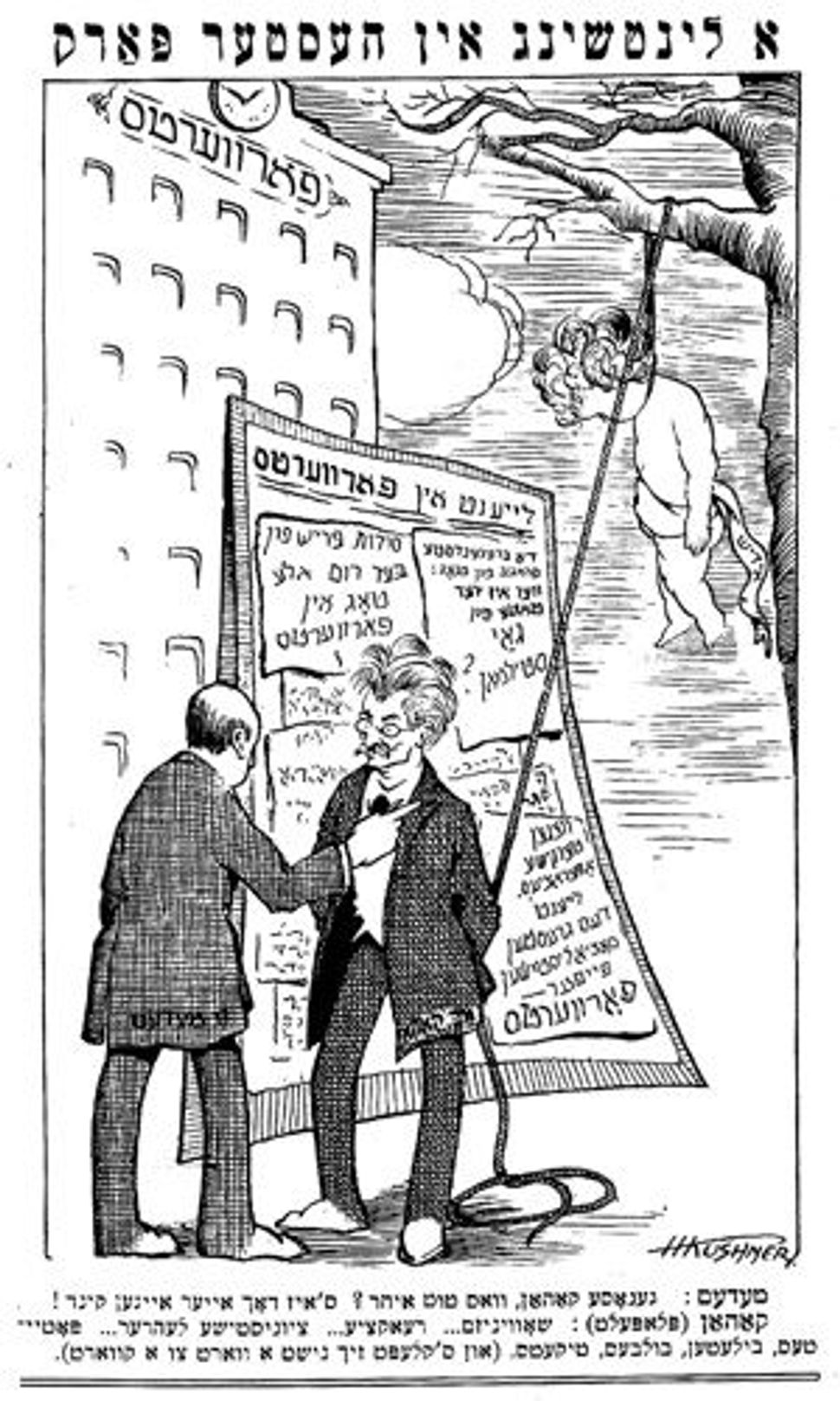 Cahan, accosted by Vladimir Medem of the Bund (their coats are labeled), kills Yiddish by using English in the Forward.

By the end of the first decade of the 20th century, the Forverts, aka the Jewish Daily Forward, was not only the best-selling Yiddish daily in New York, but was also a center for political action and social reform. At the helm of this project was the paper’s founder and editor, Abraham (Ab.) Cahan, a mustachioed crusader almost universally regarded as impossibly abrasive and exceedingly tyrannical by writers and sub-editors of all stripes. As the most significant Yiddish journalistic and literary institution in New York City and, possibly, the world, it was natural and inevitable that the Forverts and its editor in chief would become targets for the Lower East Side’s literary and political satirists.

For these local pranksters, Cahan would become a symbol representing the paper and its mission, and as a result he was caricatured in hundreds of cartoons in such humor magazines as Der Groyser Kundes, a weekly publication whose biting satirical attacks on virtually every aspect of Jewish life cracked up Yiddish readers from New York to Vilna. Taking on the Brahmins of Yiddish theater, literature, journalism and politics, Cahan not only found the Forverts’s prose parodied in Der Groyser Kundes, but also discovered that he and the newspaper’s top writers were all distorted by the angry pen of caricature. Needless to say, this did not endear him to the cartoon medium. From the late 19th century, cartoons, which had become one of the most popular journalistic features in American newspapers, appeared for only a few years during his tenure, quite a departure for someone who learned so much and borrowed so freely from the American press.

These caricatures ranged from comic interpretations of current events in the journalistic world, such as the pitched battles waged between Cahan and Forverts co-founder and former staffer Louis Miller of the competing daily, Varhayt, to often vitriolic attacks on Cahan and the Forverts as purveyors of trashy literature and betrayers of socialism. Along with other Lower East Side celebrities and public intellectuals, Cahan was an obvious target for the visual satire of Der Groyser Kundes, and though he was known as an interfering and oppressive editor, he alone did not bear the brunt of representing the entire Forverts organization in caricature. Helping to stoke the attacks on Cahan and the Forverts, the cartoonists of the Yiddish humor press developed a caricature of a bloated alrightnik, or capitalist (ironically, Cahan’s own neologism), wearing the Forverts building as his top hat. This caricature varied in style, but remained a permanent fixture, appearing along with Cahan as representatives of the Forverts for nearly a quarter century in a variety of Yiddish periodicals.

Numerous cartoons featuring Cahan also appeared in the Morgen Freiheit, a communist daily that positioned itself as the Forverts’s ideological foe. The paper’s cartoonist, William Gropper, produced many furious cartoon attacks on the Forverts and its editor over the course of many years. Gropper’s cartoons took the Forverts to task over its anti-Soviet stance, its growing support of Zionism and its antagonism toward the communist-run Furriers Union, among other politically inspired matters.

Over the years, cartoonists dressed up Cahan as a garbage picker, a janitor, a prostitute and a variety of old women, among a number of other unflattering characters. It’s really no wonder that he didn’t like cartoons. But he didn’t take it sitting down. There was a brief attempt, in 1913, to rectify the situation. During that year, the Forverts began to fund Der Kibitzer, a financially unstable humor magazine. Almost immediately, Cahan began to appear in the magazine’s cartoons as a hero to the Lower East Side’s Jewish masses and to Yiddish literature and culture. But these novel, pro-Cahan cartoons didn’t last long: Der Kibitzer went out of business the following year, and anti-Cahan cartooning continued apace in Der Groyser Kundes and later in the Morgen Freiheit. It was, perhaps, inevitable that a figure of such great import as Cahan, and the paper he ran, would be subject to many vitriolic attacks on the part of dissenters. The hundreds of anti-Cahan, anti-Forverts cartoons that appeared in Der Groyser Kundes and in the Morgen Freiheit offer just a taste of the journalistic battles and cultural disputes that took place 100 years ago on the Lower East Side.