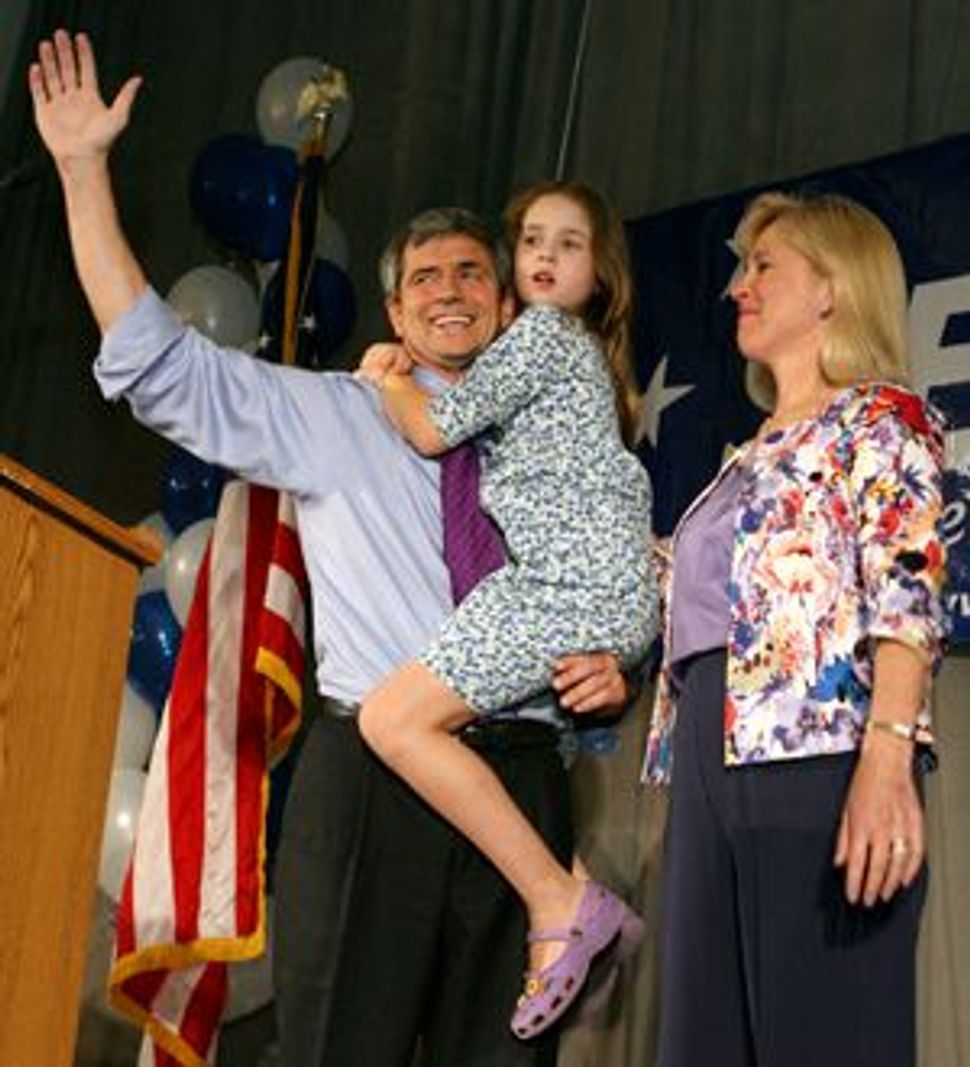 Opponent Joe Sestak , who billed himself as a ?real Democrat.? Image by GETTY IMAGES 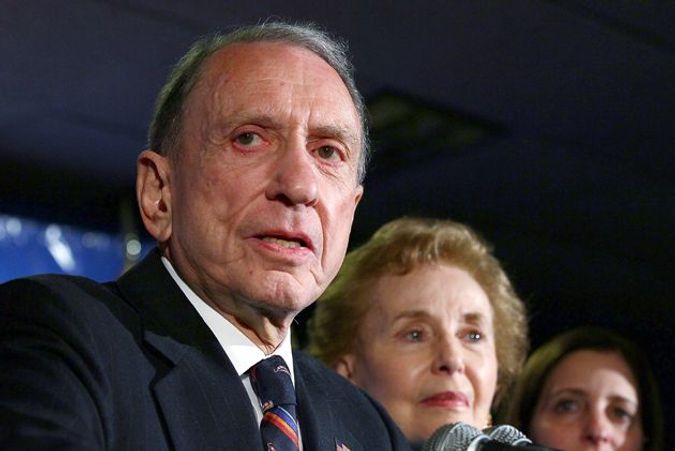 Arlen Specter on the night of his defeat, May 18. Image by GETTY IMAGES

Arlen Specter did not show up to the May 18 meeting of Jewish Democratic lawmakers with President Obama at the White House. He was busy at his campaign headquarters following voter turnout and making last-minute phone calls. Specter probably wouldn’t have felt comfortable at the meeting, anyway. While Obama was speaking with members of the informal Jewish Democratic caucus, his political advisers were already busy distancing the president from Specter, the Jewish senator of Pennsylvania who crossed over to the Democratic Party a year earlier but failed to win its support. 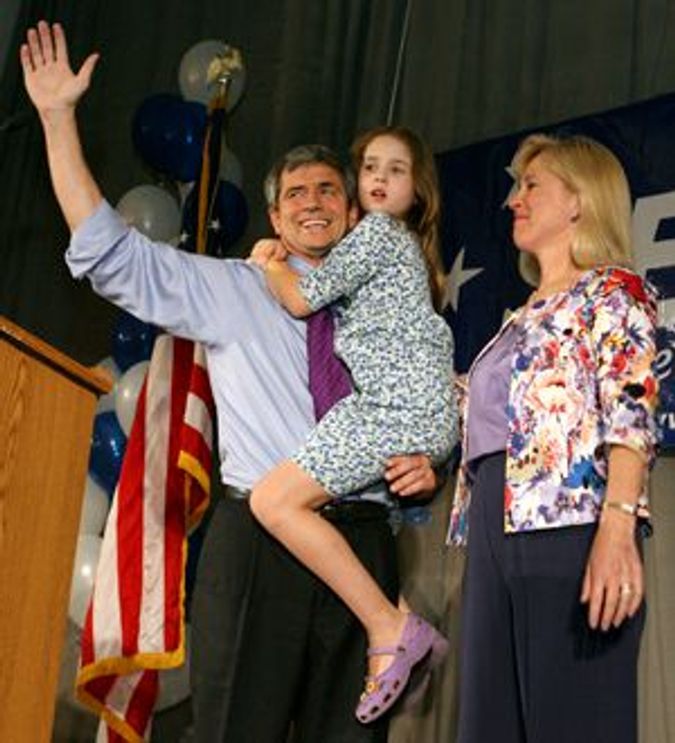 Opponent Joe Sestak , who billed himself as a ?real Democrat.? Image by GETTY IMAGES

Now 80, Specter was known in politics as a survivor. He won close political races against conservative challengers in his former Republican Party; he overcame attacks on his independent approach to domestic and foreign policy; he beat back cancer. But Specter could not survive his 2009 switch to the Democratic side and a vigorous challenge from within. Pennsylvania voters ousted him in the May 18 primary race, electing Congressman Joe Sestak, the self-described “real Democrat,” as their candidate for Senate.

Sestak’s stunning win brings the Specter era to an end, writing the last chapter on a 30-year career that also marks the disappearance — for now, anyhow — of a certain brand of moderate Jewish Republican. Specter was that rare member of the GOP who was successful in winning over votes of Jewish Democrats. Jewish voters in Pennsylvania seemed to appreciate his moderate views on social justice issues, his support for (some) liberal judicial nominees and his tireless efforts to advance medical research. One political insider estimated that throughout the years, Specter “has run much better than any normal Republican would run among Jewish voters.”

For Pennsylvania Jewish voters, who make up 2.7% of the state’s population and, based on 2008 exit polls, nearly 4% of actual voters, the choice is now between candidates representing two ends of the political spectrum: a progressive-leaning Democrat or a conservative Republican.

First elected to Congress in 2006, Sestak’s views on domestic issues fall well within the mainstream Jewish community, and he ran strong in the suburban communities that are home to many of the state’s Jewish voters. An ardent supporter of healthcare reform and a believer in greater investment in education, Sestak is not expected to encounter any difficulties with Pennsylvania’s Jewish voters, with one possible exception.

Throughout the primary campaign, Sestak found himself spending time and energy convincing some pro-Israel voters that he is not out of the mainstream on issues relating to Israel. Sestak was attacked by Specter and by Republicans for his decision to attend an event in April 2007 organized by the Council on American Islamic Relations, a group that has strained relations with the Jewish community. He also came under fire for signing on to a congressional letter calling for relief for the residents of Gaza in January 2009.

Sestak did not retract these decisions, saying that he is concerned both with Israel’s security and with humanitarian issues. In interviews and meetings with Jewish voters, the retired three-star Navy admiral chose to focus on his close ties with top Israeli military officials and his work on issues relating to Israel’s security.

One Pennsylvania Democratic activist predicted that the issue of Israel would emerge as the main selling point for Republican candidate Pat Toomey, as he seeks the support of Pennsylvania Jewish voters in November.

Toomey has focused his campaign on domestic issues, and is expected to emphasize his long record as a fiscal conservative in an election cycle widely seen as a referendum on Obama’s government spending policy. Toomey served three terms in Congress, from 1999 to 2005, representing Pennsylvania’s 15th district. His views on many domestic issues put him at odds with the mainstream Jewish community: he is pro-life, opposes gay rights and has spoken against healthcare reform legislation.

On issues relating to Israel, Toomey has taken a tough stand, welcomed by hawkish Jewish circles. During the tense period in U.S.-Israel relations following the dispute over building in Jerusalem, Toomey issued a harsh statement accusing the Obama administration of making Jewish homes in Jerusalem a greater threat to peace than terrorism. “It’s illogical and outrageous,” he said. Jonathan Tobin, executive editor of Commentary and former editor of Philadelphia’s Jewish Exponent newspaper, praised Toomey as “impeccably pro-Israel.”

Whoever wins in November, Specter’s loss will reduce the number of Jewish senators to 12 (10 Democrats and two Independents,) although Democrats are hoping for possible gains with Jewish candidates in good positions in the Massachusetts and Ohio senatorial races.

“Does it make a difference if there are 12, 13, or 14 Jewish senators? Probably not fundamentally,” said Ira Forman, executive director of the National Jewish Democratic Council, before the Pennsylvania results were in. “Still, we feel that the Jewish senators bring a Jewish tradition to public service that is helpful to our country.”