Non-Jewish spouses: A grave at Temple Israel Cemetery, which allows the burial of non-Jewish family members of congre- gants of Temple Israel, a Reform synagogue. Image by ALEX WEISLER

Holy Ground?: Temple Israel Cemetery, located in New York?s Westchester County, allows non-Jews to be buried there, but many other Jewish burial grounds do not. Image by ALEX WEISLER

That’s the distance that should separate plots for intermarried families from the rest of a Jewish cemetery, according to a new decision by Conservative Judaism’s rabbinical association. It’s roughly equivalent to about 6 feet, and for Andy Bachman, a Reform rabbi, that’s 6 feet too far. 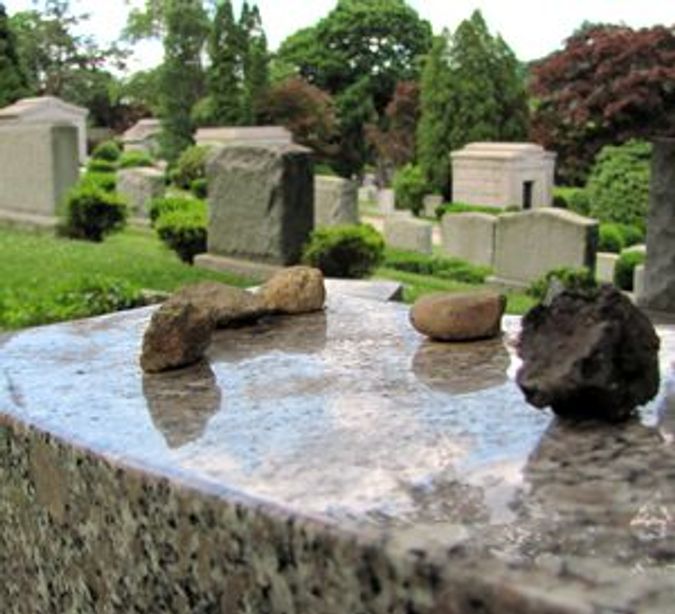 Memory: Pebbles on a grave of Jewish mourning, at Temple Israel Cemetery in Hastings-on-Hudson, N.Y. The cemetery belongs to Temple Israel of New York City Image by ALEX WEISLER

“What added insult to injury,” said Bachman, who leads Congregation Beth Elohim in Park Slope, Brooklyn, was that it “ended up creating a very similar feeling of segregation that interfaith families often feel inside communities when they’re living.”

For the decision’s Conservative backers, though, the distance represents a wrenching compromise with ancient Jewish burial tradition that calls for the complete exclusion of non-Jews from communal cemeteries.

“This is an attempt to try to satisfy the needs of the living but also to respect the values of the dead,” said Rabbi Daniel Nevins, a member of the committee that approved the decision and the dean of the Rabbinical School at the Jewish Theological Seminary of America. “You can’t go back and ask permission of all the people in the cemetery buried under one set of rules and ask, ‘Would you guys mind if we changed the rule?’”

The dueling positions come as Reform and Conservative communities begin to face the leading edge of what could grow into a major challenge: As the heavily intermarried baby boomer generation ages, the wishes of families to be buried together conflicts with the tradition that only Jews should be buried in Jewish cemeteries. 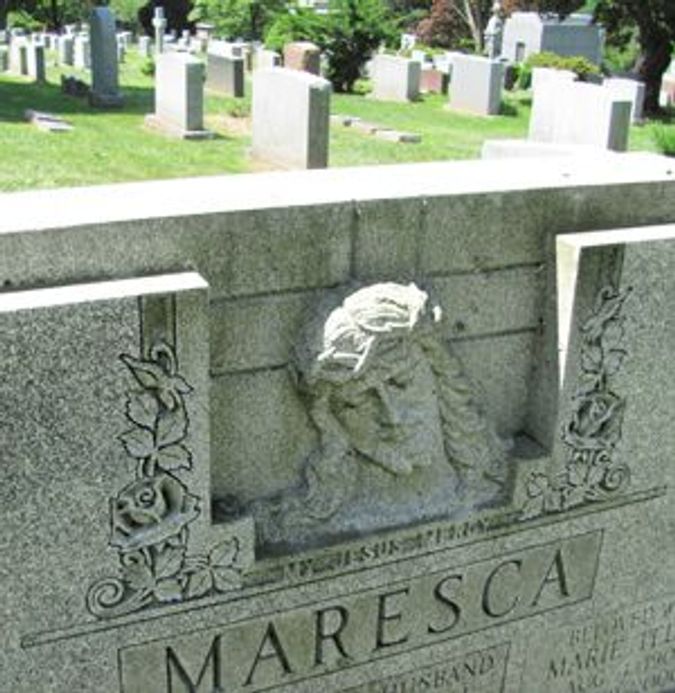 Non-Jewish spouses: A grave at Temple Israel Cemetery, which allows the burial of non-Jewish family members of congre- gants of Temple Israel, a Reform synagogue. Image by ALEX WEISLER

In the 27 years since the Reform movement began to recognize the children of Jewish fathers and non-Jewish mothers as Jews, the role of intermarried families has changed drastically in both Reform and Conservative congregations. Faced with hotly debated statistics tracking the growth of intermarriage, both movements have undertaken organized efforts to reach out to intermarried families. The result has been the creation of a set of non-Jews who exist within Jewish congregations.

“Non-Jews are also members of our community, broadly speaking,” said Rabbi Jeremy Kalmanofsky of New York’s Congregation Ansche Chesed. “They take part in all kinds of social, communal, tzedakah and ethical activities in our shul.”

Now, as these non-Jewish community members age, some rabbis seek ways to allow them a place in the community in death. “A number of these non-Jewish spouses have helped to create Jewish homes,” said Rabbi Gary Bretton-Granatoor of Congregation Da’at Elohim, The Temple of Universal Judaism, a Reform synagogue in New York. “They would fall under the term ger tzedek, righteous gentile. They should be honored for their contribution, especially if the family wants to acknowledge them as part of the Jewish community.”

According to the Conservative decision, the traditional ban on mixed burial hinges on the interpretation by the 11th-century Jewish sage Rashi of a phrase in the Talmud that, at first, appears to allow the burial of non-Jews together with Jews. But Rashi thought that the Talmud’s intention was to allow Jews to bury non-Jews if they were killed alongside Jews on the battlefield, with the bodies placed in separate graves. Later scholars argued that Rashi’s insistence on separate graves was an extrapolation of a separate Talmudic passage barring the burial of the wicked beside the righteous. In this instance, the non-Jews were the wicked.

“We bury our people with our people,” said Rabbi Moshe Tendler, a rosh yeshiva at the Modern Orthodox Rabbi Isaac Elchanan Theological Seminary at Yeshiva University. “We maintain our social relationships after death as well, hence we bury Jews with Jews. We don’t bury Jews with non-Jews because we don’t have a social relationship with them,” he said, referring to communal obligations among Jews.

“The main thing is it shouldn’t be looked upon as a derogatory view of other religions,” Tendler said. “It’s a highly personal, family concept.”

Although the Reform movement has allowed the burial of non-Jewish spouses of Jews in Reform cemeteries since at least 1914, many cemeteries still follow traditional rules, and some Reform and Conservative rabbis complain of difficulty finding places to bury intermarried congregants.

Old New York Jewish cemeteries like Montefiore and Mount Carmel in Queens, explicitly bar non-Jews. “They’re chartered to bury people of the Jewish faith, so non-Jews are not allowed,” said Rich Fishman, the director of the New York State Division of Cemeteries. “They’re independent corporations; they can decide what they want.”

Some cemeteries have been asked to change their policies.

For years, Ansche Chesed’s Kalmanofsky has been “nudging” the leadership of the cemetery where his congregation owns plots to allow a separate section for intermarried families.

“I think it’s unduly harsh to exclude non-Jewish people’s remains from Jewish cemeteries,” Kalmanofsky said. “I think it’s a mistake to make a dismissive, alienating gesture at the time of death.”

“To change it requires some new thinking that we can’t see our way towards at this point,” said Peter Blacksberg, the president of the hundred-year-old Riverside Cemetery in Saddle Brook, N.J., where Kalmanofsky’s congregation owns plots. “Although you can find a way to argue your point, we also have to have ways to have fairly rigid rule sets, otherwise whatever the next interpretation is would have to change all the rules…I understand the halachic interpretations” that allow mixed burial, “but we have an institution.”

Current solutions for intermarried couples vary. Some Reform synagogues own cemeteries, or have rights to sections of larger cemeteries, where mixed burial is allowed. The bylaws of Temple Israel of the City of New York, a Reform synagogue that owns a cemetery in Westchester County, allow for the burial of families of synagogue members “regardless of their religious affiliation.”

But Bretton-Granatoor said that he knows of instances where intermarried couples have been buried on outskirts of Jewish sections of secular cemeteries.

Bachman said he worries that many families will choose to be buried in nonsectarian cemeteries, which have no religious restrictions on burial. He sees the possibility as a serious blow to the community’s connection to itself and its history.

“A Jewish cemetery tells a particular story about particular Jewish communities,” he said. “We’re dangerously close to really losing a whole aspect of the Jewish narrative, which are the stories that people tell when they sit inside the cemetery, when they linger after a funeral, when they visit the graves of aunts and uncles and cousins and grandparents, and they begin to share all of those stories about Jewish life and connections.”

Conservative and Reform rabbis agree that something must be done, but they disagree on what.

In February, the Committee on Jewish Law and Standards of the Rabbinical Assembly, the Conservative rabbinical organization that decides issues of religious law and policy for the movement, passed a rabbinical decision, or teshuva, allowing for the delineation of a separate section within a Jewish cemetery for mixed burial. The two sections can be separated by a wall, shrubbery or a path, but “a path is preferable” because a “physical barrier sends a message of exclusion.” A path with a suggested width of 65 to 90 inches is “easily crossed” and therefore “sends a message that the non-Jewish spouse was a part of the present day extended Jewish community.”

Although it finds “no specific prohibition in the Bible or Talmud” to mixed burial, the decision stops short of opening cemetery gates to non-Jews. “A thousand-year custom should be respected and not lightly discarded,” the ruling reads.

The vote was 10-1, with three members abstaining.

The dissenting member was Rabbi Miriam Berkowitz, who lives in Israel. In an e-mail to the Forward, Berkowitz wrote that she opposed the decision because it removed an incentive for conversion, and because it offered no way to distinguish between non-Jewish spouses who are committed to the Jewish community and those who are not.

“If non-Jews can participate in weddings, bnai mitzvah, and community life, and be buried in a Jewish cemetery,” Berkowitz wrote, “why would they bother converting?”

Nevins, who voted for the decision, disagreed. “It used to be that we sort of held out this thing as an incentive to convert,” he said. “None of us really feels good about that, because, after all, it goes against another value of ours — to not have ulterior purposes for a conversion.”

Bachman said that the burials he oversees now continue to be almost exclusively those of in-married couples. But he is concerned for his younger congregants.

“Most people try their best to deny that death is coming,” Bachman said. But “when people die suddenly, when they die unexpectedly, families are faced with these terrible dilemmas of non-Jews being denied burial in family Jewish plots.”