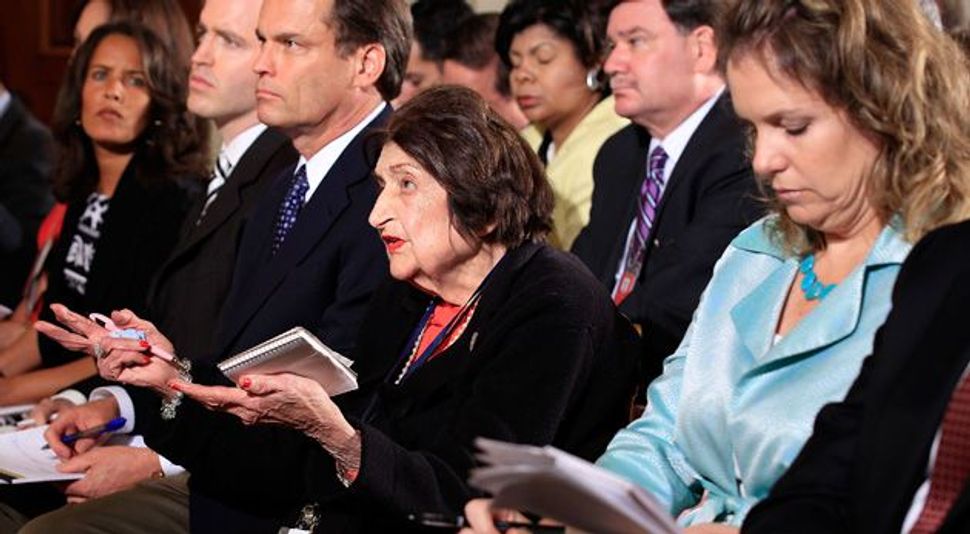 Nesenoff, of Stony Brook, N.Y., was caught in a media whirlwind after capturing on video longtime White House correspondent Helen Thomas telling Jews to “get the hell out of Palestine” and go “home” to Poland and Germany. Thomas, 89, abruptly retired as a columnist for the Hearst newspaper chain shortly after the comments were made public on YouTube and on Nesenoff’s website, rabbiLIVE.com.

Now, given a media spotlight — however brief — that he attributes to divine intervention, Nesenoff is on a mission to fight those who view Israel as something separate from Jewish identity.

“This concept… that there’s no connection between Israel and the children of Israel… now they’re coming out openly and saying it,” Nesenoff told the Forward in a June 11 interview. “It goes beyond anti-Semitic. It is anti-God, because anybody that believes in God, no matter which philosophy… believes in books and liturgy and literature that contain Jews as the children of Israel. That’s why this thing has blown up so big, because [Thomas] and the people that support her have broken into the very rock and the foundation of all religion and all philosophy.”

Nesenoff is nothing if not voluble. Educated at Yeshiva University as an undergraduate before attending the Jewish Theological Seminary, Nesenoff was the rabbi of Temple Beth Sholom of Smithtown on Long Island until just two months ago.

Nesenoff said the Conservative synagogue he led has been in dire fiscal straits for the past year. He had accepted a half-salary deal but left the Smithtown congregation on May 1 after being told that Beth Sholom would be unable to pay even that.

“We can argue over whether it was mismanagement or the economic times,” he said. “That’s a separate story. We had to part ways.”

Shafer Zysman, the synagogue’s executive vice president, said that Beth Sholom was unwilling to comment on the circumstances of Nesenoff’s departure but that the congregation’s finances were in order.

“We generally do not discuss internal synagogue policy and issues,” said Zysman, who will become the synagogue’s president in two weeks. “The synagogue is looking bright. The congregation is very focused, determined and it looks like we’re going to be in a very good light, so you can read between the lines however you’d like,” he said.

Nesenoff said his “congregation” is now the world or anyone who will listen.

Married and a father of two, Nesenoff describes himself as “creative.” Besides his website, he has pursued filmmaking and composing Jewish music.

Nesenoff’s creativity was what prompted the interview with Thomas. He was on the grounds to create “Israel Breathes,” a compilation of filmed interviews in which Nesenoff asked attendees of the May 27 Jewish Heritage Month celebration to share their thoughts on Israel. He approached Thomas after he spotted her on the White House lawn.

Nesenoff maintained that it was simply his presence at a Jewish heritage event, not his interview with Thomas, that provoked thousands of people to e-mail him. His 17-year-old son, Adam Nesenoff, and his friend Daniel Landau, who were at the White House with him, have been sifting through the e-mails and press requests as they come in.

Despite the influx of anti-Semitic e-mails — full of comments like “The Holocaust never happened” and “Death to Israel” — Nesenoff said there has also been an outpouring of love from people who support him. He said he even received an apology letter from one man who had originally sent him hate mail.

“Hashem has his hand in everything,” Nesenoff said. “We received an e-mail of teshuvah [repentance] and [the author] wrote what I consider to be a sincere apology. We took his hate mail down [from the website].”

Still, Nesenoff said the experience has made him more aware of an anti-Semitic voice in the United States. “I don’t know if it’s mainstream, but I know there’s a stream,” he said.

Once the story of Thomas’s comments broke, Nesenoff came under scrutiny for appearing in a video depicting a man of Mexican descent pretending to give a weather forecast while a bearded rabbi in a black hat and coat stands nearby.

The four-and-a-half-minute video, titled “Holy Weather,” features Nesenoff dressed as “Father Julio Ramirez,” an outsize caricature of a Mexican priest. The rabbi makes statements that fuel stereotypes, painting Mexican laborers as dishwashers. He speaks in an exaggerated rasp of a Mexican accent, saying, among other things: “The last time I saw a map like that I was in an immigration office with three gringos down on the Mexican border, you know, right near New Mexico.” Fractured Spanish pops up from time to time, as when Nesenoff says the rabbi’s tendency to get better assignments is “no mucho bueno picnic.”

Though some critics used the skit as ammunition to portray him as a hypocrite and a racist, Nesenoff said he was dressed up because it was Purim.

“I really believe God has a sense of humor,” he said. “No one knows it’s Purim, because these people don’t know what Purim is. It first upset me, but I will tell you that Hashem did this so I can get a little more airtime to talk about Israel. Who knew that that would be something that would divert attention from the anti-Semites?”

Contact Laurie Stern at stern@forward.com and Alex Weisler at weisler@forward.com