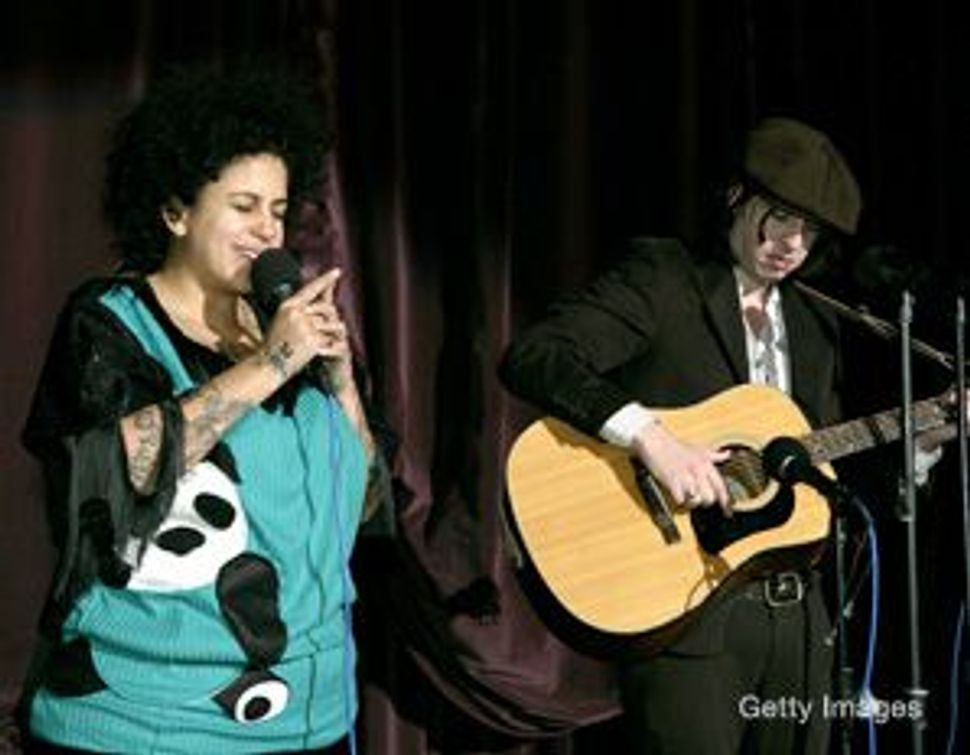 Honest Refrain: Kimya Dawson and Adam Green (aka The Moldy Peaches) performed at the premiere of 'Juno.' The movie's top-selling soundtrack featured a number of songs written by Dawson.

Kimya Dawson is the top-selling artist in America! I admit I didn’t see it coming. The last band I knew before it was famous (you know… when it was really cool) was the White Stripes, which my friend Adam saw perform on his college campus. I’d forgotten what this feels like — this sense that the world is now in on your private little club. 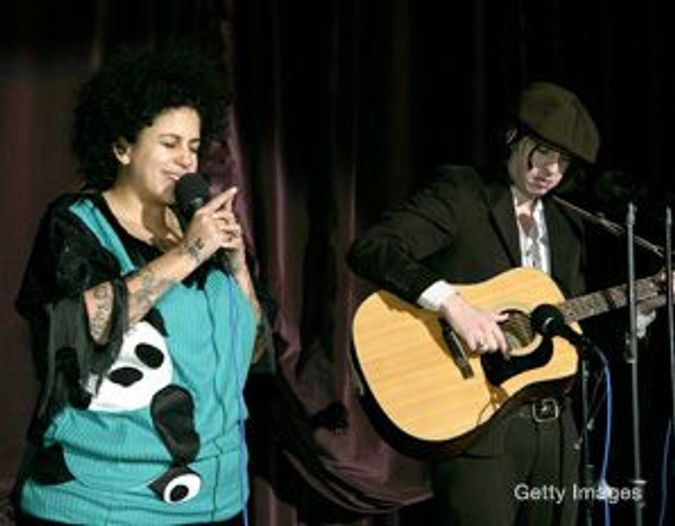 Honest Refrain: Kimya Dawson and Adam Green (aka The Moldy Peaches) performed at the premiere of 'Juno.' The movie's top-selling soundtrack featured a number of songs written by Dawson.

But I’m thrilled. I’ve never been one to begrudge musicians their fame, and I’m not going to start now. Go Kimya! You deserve having the “Juno” soundtrack at No. 1 on the Billboard charts. If nothing else, you give hope to your fellow 36-year-olds (like me). But there is something else.

The musical genre called anti-folk has been around for 15 years, but with the success of the “Juno” soundtrack, it has now broken into the mainstream. (Arguably, Beck was the first anti-folk superstar, though his persona is idiosyncratic.) The main features of the “movement” are the scare quotes around the word “movement”: a deep suspicion of the cliché that often accompanies earnestness and yet, at the same time, an understanding that deep down, hipster irony is ultimately boring and un-redeeming, and so, dammit, yes, give us earnestness — but without anything that remotely resembles Peter, Paul & Mary.

It’s a delicate dance, really. Too much sincerity and you’ve got Dashboard Confessional. Too much irony, and it’s Scissor Sisters. Not that there’s anything wrong with that, necessarily…

The Moldy Peaches, Dawson’s band with the cute, potty-mouthed Adam Green (yes, a MOT), walked the tightrope. (They’ve been on hiatus since 2004, and Green and Dawson each have solo albums and side projects, but they still play together once in a while.) Poster children for anti-folk, their songs were innocent but dirty (“Downloading Porn With Dave-O”), sweet but quirky and sad (“Anyone Else but You,” the musical star of “Juno”). When I first saw them perform, Dawson wore a bunny suit and Green wore Superman Underoos. It was silly, but also sincere. Which is almost the only way to do sincere without being cheesy.

“Juno” is the cinematic equivalent of a Kimya Dawson album. Juno is a teenager who’s so cynical, she’s innocent again. She gets it, which is why she doesn’t need to get it, which is why she’s in love with Michael Cera’s awkward Paulie Bleeker. Yes, he isn’t cool, which is why he’s so cool — because he doesn’t try. (“Actually, I try really hard,” Paulie says, in a perfect reality check.)

And Juno is seeking a kind of innocence. “All I want to do is ride bikes with you/and stay in bed/and watch cartoons,” Dawson sings on one Peaches song. Juno is the same way. She has a precocious vocabulary and taste for music, but her values are solid, old school. She has a moral compass and a quirky kind of purity. She is, in short, anti-folk personified: an earnestness so earnest, it can’t be earnest, because earnest is so corny. But it’s not nihilism, either (think of the interchange between Juno and Rainn Wilson’s cynical store clerk).

What I like most about Dawson’s music is how it is sad and happy at the same time. Sadness is hard to do in music, especially these days, with whining white boys downloadable all over the Internet. Sometimes, “straight” sadness works: Elliott Smith, Nick Drake, Damian Rice. Other times, it’s just the worst kind of banality. With Dawson, the loneliness is palpable, and yet so is the joy — and the blending makes it work. Just the refrain of “Anyone Else but You” nails it: “I don’t see what anyone can see, in anyone else/But you.” The world is full of idiots, and I’m lonely and I’m not as cute as the others are, but love is still real. Oh, and no, I don’t want to come out and say that, because it’s corn, so I’ll say it as artlessly as possible, lo-fi and anti-folk, so as not to corrupt feelings with pretension.

There’s a kind of redemptive honesty in this music. Maybe, in the Obama Age, we’re due for another round of honesty in our culture, and our music; up there on the charts with “Juno” is Amy Winehouse, Jack Johnson, Alicia Keys. The last time that popular music was this sincere it was 1992, and we elected a Democrat to take the place of George Bush. Please, let me not be dreaming.

But of course, these times are different. “Juno,” “Little Miss Sunshine” — our best “feel-good” movies today are ambivalent. Sure, there have been countless saccharine romantic-comedies, but the quirky independent films that strike a chord feel good while at the same time feeling bad — just like Dawson. This, I think, this is what “feeling good” has to look like today. We’re living in bad times, remember? War, recession, cultural impoverishment. Feeling good, unless it’s based on ignorance, has to have a tinge of sadness around it, like Hasidic niggunim that dance in a minor key, or a Jewish joke that has pathos all knitted up with the humor.

No, Juno and Kimya Dawson are not Jewish artifacts. (Even though Dawson did grow up in Westchester County, Paulie Bleeker is Jewish, the opening track on the soundtrack is by a Jewish folksinger, yada yada yada.) But they do resonate with my own Jewish sensibility, which has both a public and a private dimension. Publicly, there is a vague sense that unalloyed joy is somehow inappropriate for these times — not as a matter of morality, exactly, but of taste. And of course there’s the private, personal side, as well; my own sensibility, as a prolific, artistic screw-up, a once-again-single guy whose peers are partnered with kids, an oddball myself whose solitude is redeemed only occasionally by art. So thanks, Kimya, for resonating.

Of course, the success of Dawson’s music is that it doesn’t moan. It doesn’t wallow in sadness but finds a space for joy alongside it, or perhaps amid it — especially the innocent joys of childhood. But willful innocence is not guileless; a re-embrace is not the same as the original embrace. There is something sad at the core of the “Juno” soundtrack — and beautiful because of it.

Jay Michaelson is a columnist for the Forward and the author, most recently, of “Another Word for Sky: Poems” (Lethe Press, 2007).