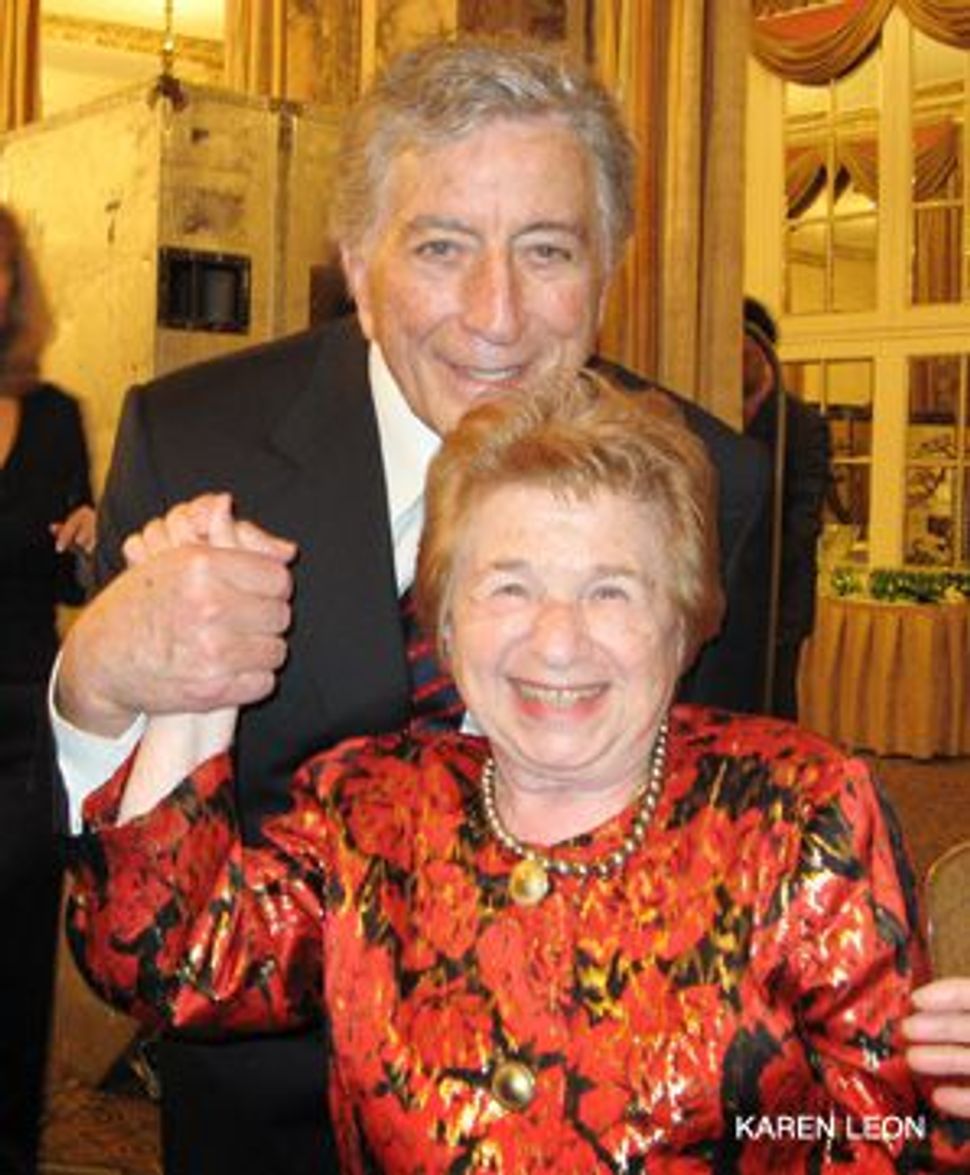 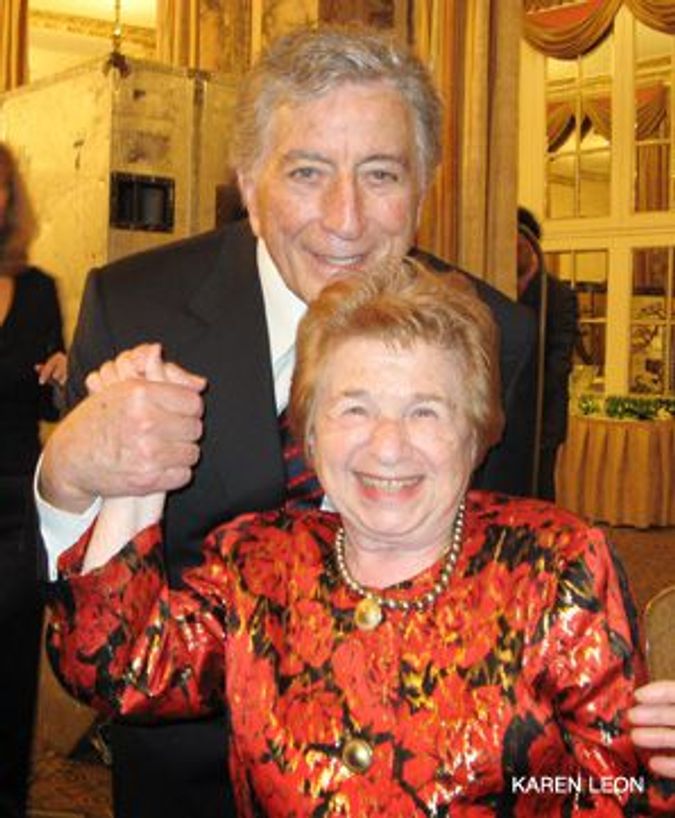 At the February 6 American Friends of the Israel Philharmonic Orchestra tribute to Leonard Bernstein (with which the composer had a 40-year-long association), Bernstein’s daughter Jamie, the gala host, informed: “‘Candide’ was father’s valentine to Europe… [but] he blossomed when in Israel.” Addressing the black-tie crowd at the Waldorf-Astoria, AFIPO president Elaine Wolfensohn thanked co-chairs Judith and Burton Resnick and Stacey and Matthew Bronfman. Michael Barrett — whose article on Bernstein’s Yiddishkeit appeared in the Forward in 1990 — conducted the IPO. Soprano Michelle Areyzaga, mezzo-soprano Elizabeth Shammash, tenor Jeffrey Picon and baritone Hugh Russell were luminous in performing selections from “Candide” and from the Bernstein works “Wonderful Town,” “On The Town” and “West Side Story.”

The evening’s special guest, Tony Bennett (who later posed with Ruth Westheimer), offered mellow renditions of the Betty Comden-Adolph Green classics “Lucky To Be Me” and “Some Other time.”

If you’ve ever wondered why Cunegonde, the courtesan in “Candide,” sings: “My mother came from Grodno Gubernie (Grodno County)” — that’s where Bernstein’s family hails from, as does mine: Byten/Grodno in what is now Belarus. We are distant cousins.

A few weeks before Bernstein and I were supposed to get together to ruminate about our cousinship and the Grodno/Litvak ethos, Bernstein died from complications of asthma, emphysema and other traumas related to “merciless smoking.” He was 72. I attended the tribute to Bernstein at the Cathedral of Saint John the Divine, hosted by actor Jason Robards with composer Lucas Foss leading an orchestra of musicians from ensembles Bernstein had conducted all over the world throughout his long and illustrious career. That evening’s guest of honor was Teddy Kollek, the legendary mayor of Jerusalem.

In the 1990 Forward article “At Tanglewood, Bernstein Returns to Yiddish Roots,” Michael Barrett wrote that the maestro had included Barrett’s own translation of Yankev Yishhok Segal’s “Oyf Mayn Khasene” (“At My Wedding”) in his program. Barrett also noted that “as a boy, Lenny received his catalyst and inspiration from his father’s Chassidic friends.… Though he performed in Israel and wrote the Kaddish Symphony in 1963 and the 1974 ballet for Jerome Robbins’s ‘The Dybbuk,’ there was some grumbling about a nice Jewish boy writing the Mass, his 1971 opus with which the John F. Kennedy Center for the Performing Arts was inaugurated.”

When I mentioned the IPO-Bernstein tribute to Rita Lerner, a trustee of the Museum of Jewish Heritage – A Living Memorial to the Holocaust, she told me that her mother, Henny Durmashkin Gerko, had been accompanied by Bernstein in Munich in 1948. “He was in Germany to conduct the ‘Ex-Concentration Camp Orchestra’ — a small group of survivors sponsored by the Joint Distribution Committee, which traveled to displaced persons camps to perform for fellow survivors.” With Bernstein at the piano, “my mother sang Hebrew songs from the ghetto.… She had studied at the Conservatory of Music in Vilna and her brother, Vladimir Dumashkin, a child prodigy, became Vilna’s Philharmonic conductor at 25. He helped organize the cultural life in the Vilna ghetto, but did not survive the war.… My mother was liberated on a death march in 1945.” Lerner noted: “Years later, she gave the printed program, autographed by Bernstein from all those concerts that she had traveled to with him, to the Holocaust museum.” The program is on display in the museum’s Aftermath Gallery on the second floor. During a recent lunch with composer and Forward reader Dorothy Lang (whose works have been performed by the New York Virtuosi Chamber Symphony Orchestra), I discovered another Leonard Bernstein tidbit. “I met Leonard when, as a young girl, I worked at Warner Bros.’ music department,” Lang recalled. “It was after his big splash… I used to go to all his concerts. My father, Cantor Abraham Kleiman, and Leonard’s father were close friends and shared a love of chazzanut [cantorial music]. They’d spend evenings listening to recordings of all the great chazzonim. One day, Leonard’s father turned to my father and asked, ‘Nu, when are we going to prave [celebrate] the sheva brokhes [the traditional seven wedding blessings]?’ Obviously the shidakh was wishful thinking on the part of Lenny’s father.” The only reply I could muster was, “You might have been Dorothy Bernstein, and Lenny would have conducted your works.”

As masked guests arrived at the Waldorf-Astoria for the Jewish Museum’s March 5 Purim Gala, they were greeted (or hugged!) by a humongous green Shrek, based on the character that Bronx-born Jewish artist William Steig created. Steig was the subject of the museum’s current exhibition. A huge multi-colored crown dangling from the ceiling and groggers at every seat set the mood for fun and noise. Video greetings from Jeffrey Katzenberg, CEO of DreamWorks Animation (which produced all three “Shrek” films), were followed by welcomes from co-chairs James Crystal and Ira Lipman and from museum chairman emeritus Morris Offit, who was kvelling at the large representation of the museum’s “next generation” of supporters in the room. Museum director Joan Rosenbaum thanked Martin Sullivan, president and CEO of AIG, the ball’s corporate sponsor, for AIG’s generosity in helping bring the Dead Sea Scrolls to the museum. In British-accented English, Sullivan applauded New York City’s Jewish community’s contribution to the city’s cultural landscape. And in a hilarious video, comedienne Judy Gold resorted to Shrek as a baby-sitter for her “Call 911”-savvy young daughter (“I know he’s Jewish”), setting the stage of the evening’s Purim shpiel.

Daniel Menaker, whose curriculum vitae includes editor in chief at Random House, contributor to The New Yorker and twice a winner of the O. Henry Prize for short stories, challenged the guests’ intellectualism. Parsing the Esther story, he alluded to “publishers slaying all the authors,” offered an aside about Esther keeping her Jewishness secret “like Madeleine Albright,” and posited, “What would happen if God decided to update and revise the Megillah… sending it to the wrong kind of copy editor?” With challenging footnote asides, and with constant grogger interruptions at the mention of Haman, Menaker ended on an imbibing note: That there should be “drinking according to the law… prisoners to be tortured by beer, not water… and punishment meted out for not drinking.” L’chaim!

Following a scrumptious dinner (Ginger chicken Pot-Au-Feu with mild mushroom stuffing) with a menu that was “created in consultation with Chef Eric Ripert, owner of Le Bernardin and presented by Foremost Ram Caterers, the band got into full swing as the guests filled the dance floor.