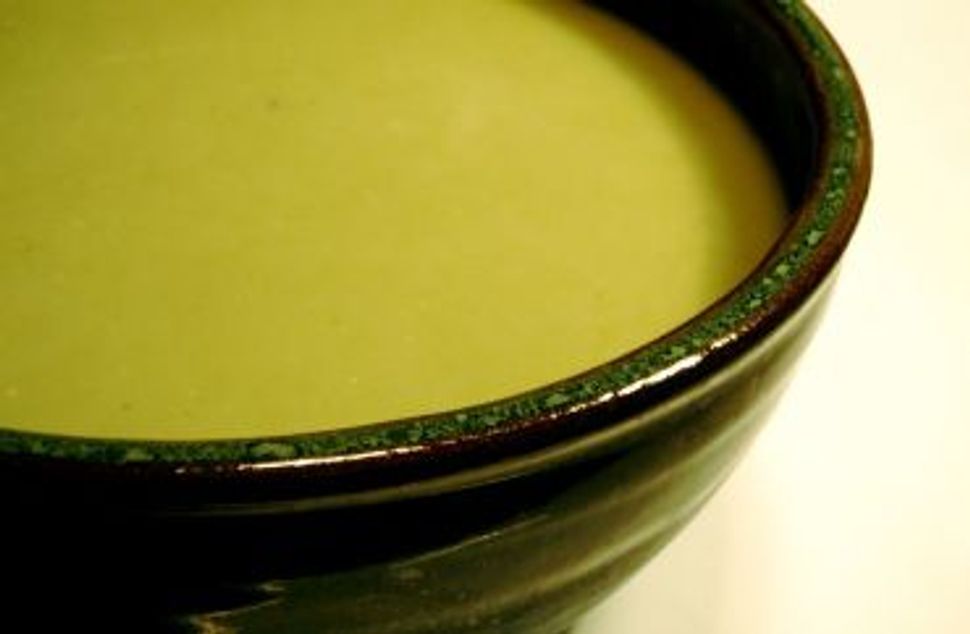 Last January I interviewed my first cousin once-removed about his experience surviving the Holocaust as a child in a Siberian labor camp. At one point he mentioned a “sour leaf” that his family used to make a soup called schav. Soon after, while visiting the Culinary Institute of America in Sonoma, I surreptitiously pinched a leaf of French sorrel from the herb garden, feeling strangely drawn to that particular plant above the others.

The moment it hit my tongue, the sharp tang of the oxalic acid triggered some vast, dormant cultural memory which I could not yet place. Still, I felt transformed by it. It wasn’t until months later, while researching an article for the Forward, that I discovered the connection in schav, the cold, Russian soup with many variations but one common theme: sorrel. It was then that the words of my cousin came floating back into my mind. I now knew what that sour leaf was, and I knew that I had to use it to make some schav.

Until then I had only known schav as one of the many Old World foods now relegated to low shelves in a few supermarkets. There rest many of the traditional foods of my people, confined to glass jars and floating in a bath of preservatives like specimens in a museum. I knew that it was my calling to break the glass and to free the schav.

When it came time to order seeds for my garden, an heirloom French sorrel was top of the list. Soon the schav that had until now been locked in my cousin’s memory was taking root in my backyard.

The sorrel grew into as large and lush a plant as the one I had first seen in Sonoma. When I snapped off a leaf from the garden and bit into it, I experienced the same mysterious rush as I did the first time. In case I couldn’t tell by the size of my schnoz, I now had proof that I was a Jew.

To make my schav, I consulted several recipes before settling on the most simple one. I harvested the leaves and trimmed the stems while sautéing a small amount of onion in olive oil. To this I added the sorrel, now sliced into ribbons, which I tossed in olive oil before adding water, salt, and pepper. It simmered until the flavor of the leaves had infused the liquid, about ten minutes. Having never actually had schav, I wasn’t entirely sure that it looked or tasted right, but felt that it needed one more touch. A quick pass through the blender on “purée” and suddenly I had what I was looking for: a smooth, rich, sea-monster green broth.

Then came my favorite part, which involved slowly whisking two beaten eggs into the still warm liquid. The eggs came from Codman Community Farm, a sustainable non-profit working farm about a fifteen minute drive from my house. Once the soup had chilled in a glass jar in the fridge I topped it with a generous dollop of locally made, whole milk plain yogurt and a sprinkling of freshly cracked black pepper. It was rich, murky, and tasted like history.

By opting for fresh, local, sustainably raised ingredients, the centerpiece of which came from my backyard, I had prepared the schav in much the same way my ancestors must have made it since the diaspora first landed them in Russia. By freeing the schav from behind the glass, I felt I had somehow done a miztvah.

Chop the sorrel into ribbons while sautéing the onion in the oil. Once the onion is translucent but before it browns, add sorrel, toss to coat, and add the salt, pepper, and water. Let simmer for 10 minutes or until the water has taken on the flavor of the sorrel. Purée in a blender or food processor until smooth. Return the liquid to the pot and slowly whisk in two well beaten eggs. Refrigerate until chilled and serve with dollop of yogurt and sprinkling of freshly cracked black pepper.