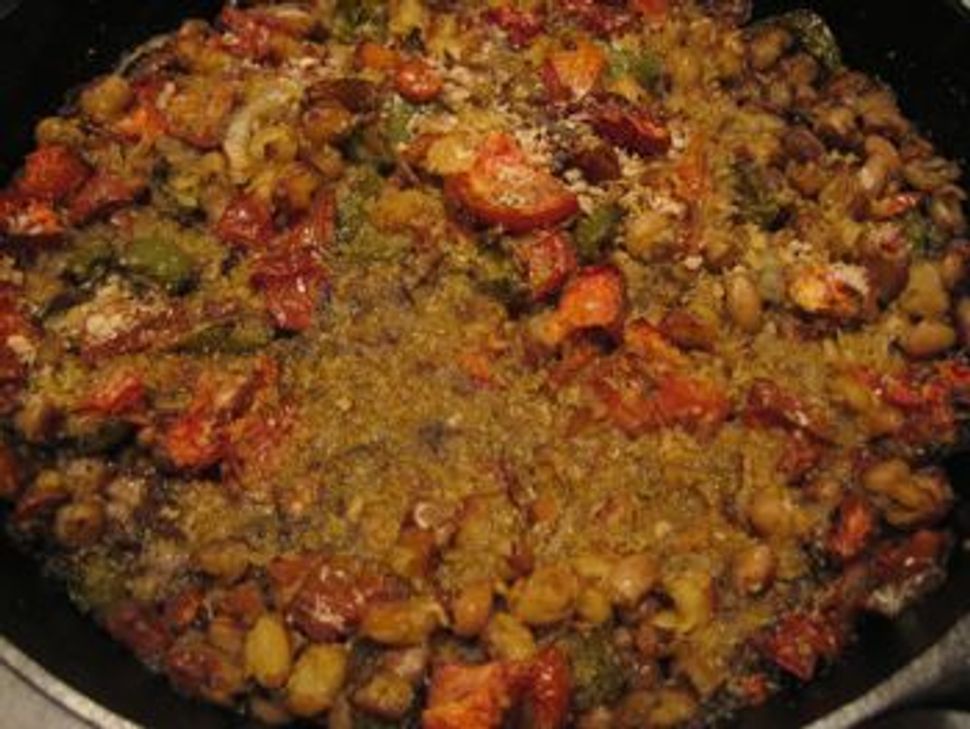 In case you hadn’t noticed, it’s tomato season. Our CSA specializes in Heirloom tomatoes, so this means at this time of year, we usually get three different varieties in our weekly box: usually grape tomatoes, heirlooms and one other variety like Romas. While the temptation is always there just to eat them fresh with just a sprinkling of salt, I’ve discovered two new dishes this summer that are worth sharing.

The first requires slow-roasting cherry or grape tomatoes. I actually discovered this technique last summer, and there are plenty of food blogs to offer tips. I just cut the tomatoes open, put them on a baking sheet, drizzle with a little extra virgin olive oil and sea salt, and put in a low oven (about 225 degrees) for a minimum of two hours. If you have the time, three or four hours is even better. Slow-roasting brings out all their tomato-ey essence. They also store longer that way; you can cover them in a bit of olive oil and keep them in the fridge.

So last week, I did this, and topped some polenta with the slow-roasted tomatoes, sliced Kalamata olives and a sprinkling of feta cheese. So simple and so delicious.The second recipe I can’t take credit for.

My friend Adam Edell submitted it to me to be served at the Hazon Food Conference, and before I committed to adding it to the menu, I had to test it out. Needless to say that I called him the next day (it was worth a phone call and not an email) and left a rambling message about how this dish was my new favorite recipe.

We will probably use canned tomatoes at the conference, but now, of course, fresh is optimal. In this photo I added a green pepper, and the second time I made it, I added eggplant and zucchini from our box as well. It’s one of those recipes that can be improved by adding whatever you have on hand. Enjoy!

1 onion halved lengthwise and cut into half moons

2 large tomatoes finely chopped or 1 14.5 oz can of tomatoes

Soak beans overnight in warm water. Drain soaking water. Put beans in pot with 3 c water and boil. Cover and simmer at low heat til beans are tender 40-60 min. A pressure cooker can be used here as well. Meanwhile, put oil in a flame proof and ovenproof dish (I used a cast-iron skillet) and put on med-high heat.

Add onions and cook 5 minutes. Add carrots and cook another 5 minutes. Add tomatoes and cook until soft, 7-10 minutes. Turn off heat,and preheat oven to 325 degrees. Add cooked beans and their liquid to veggies. Add salt, pepper, parsely, oregano. Put in oven and bake uncovered for 2 hours. Add more liquid during cooking if needed. I added a bit of bread crumbs for the photo, but they are not needed. Grated cheese makes a nice garnish.