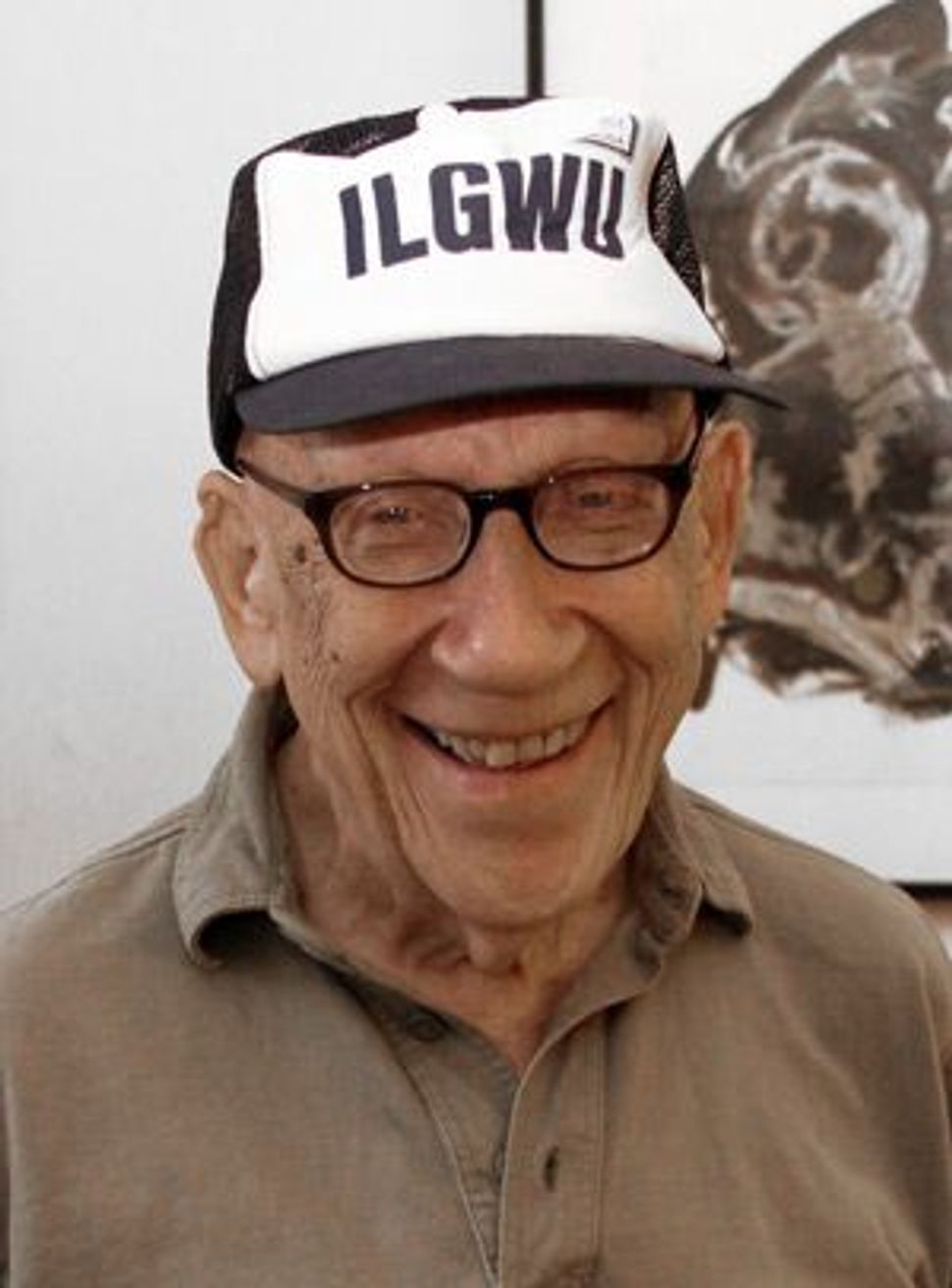 Twelve years into Aaron Adler’s retirement, the value of his life insurance policy was cut by $95,000.

Adler, a former staff member of the historic International Ladies Garment Workers Union, was not alone. In 2003, life insurance policies of all the union’s former officers and staff were slashed from upward of $100,000, to a flat rate of $5,000. Now, after seven years of legal wrangling, some of the former union employees believe that their benefits may be reinstated as soon as September 15, at a meeting with the leadership of one of their now-defunct union’s institutional successors. 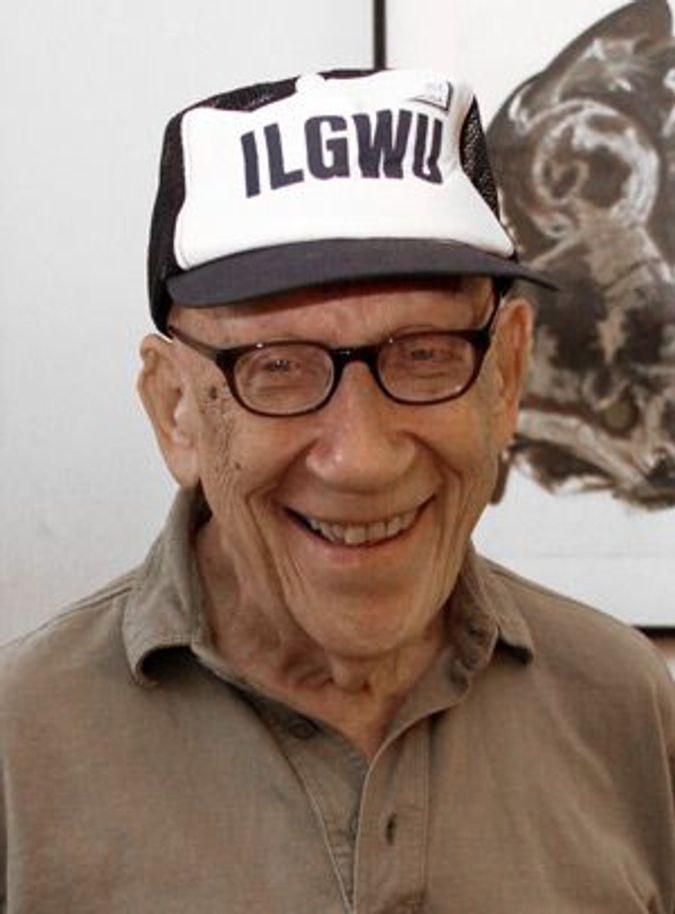 “They have to promise us something at that time,” said Adler, 81, sitting on a couch at his home in the Kew Gardens section of Queens. “They can’t just sit there and say, ‘We’re going to have more of the same, no end in sight.’”

Adler lives alone, in a studio apartment with art-covered walls. In his closet he keeps an old ILGWU baseball cap. He began working for the union as a clerk soon after returning from the Korean conflict, and eventually retired as a benefits adviser at a union local that represented workers making undergarments, negligees, brassieres and girdles. Like many of the former employees, he said that the salaries the union paid were low — lower, even, than those paid by other unions.

Union staffers’ salaries were “dependent on the dues,” Adler said. “The dues came from the members. They paid as much as they could; it was hard for them to even pay the dues. They were working women. They worked very hard for their buck. It couldn’t be a high salary; it wasn’t a high-paying industry.”

Once among the most prominent American labor unions, the ILGWU has long since disintegrated in a succession of mergers and splits. In its heyday, its rank and file was dominated by Jewish and Italian women; its leadership by moderates like David Dubinsky. Today, what remains of the domestic clothing manufacturing industry is split between two of the ILGWU’s institutional successors, UNITE HERE and Workers United, which is affiliated with the Service Employees International Union. A high-profile internecine battle between UNITE HERE and Workers United was settled in July, leaving Adler and his colleagues hopeful that their own concerns will soon be resolved.

Members of the Retired Officers of the ILGWU, a group of former union staff and officers that has waged an eight-year legal battle to preserve the benefits they believe they are owed, say that the low salaries they drew while working at the union were at least partly motivated by ideology. Dubinsky, who led the union from 1932 until 1966, didn’t think that staff and officers should earn much more than the workers, according to Lester Kushner, 83, who worked as an assistant general counsel at the ILGWU for 25 years.

In return for the salaries, however, the employees were given good benefits — including a pension, the right to pay into the union’s death benefit fund, and a life insurance policy that eventually was worth two and a half times each employee’s salary upon retirement.

“You were supposed to get not only a pension, but also the life insurance,” said Max Zimny, 85, who served as the union’s general counsel. “It was a very important part of the package…. Many of us, including myself, had opportunities to work at [a] much higher salary at other unions, but because we had this total package and because we liked working at the ILG with Dubinsky and others, we never took another job.”

The decision to cut the pensions came in 2002, seven years after the ILGWU merged with the Amalgamated Clothing and Textile Workers Union to form the Union of Needletrades, Industrial, and Textile Employees, called UNITE. The new union was headed after 2001 by Bruce Raynor, on whose shoulders the retirees place the blame for their troubles.

“We were very disappointed by Raynor and his colleagues, and to put it bluntly, they shafted us real good,” said Douglas Levin, 88, who retired from the ILGWU as a vice president.

In a recent conversation with the Forward, Raynor, who now serves as president of Workers United, defended the cuts as necessary and appropriate. He argued that the Retired Officers of the ILGWU represent a small fraction of the former officers and staff of the unions that merged to form UNITE. Further, he said that the promised life insurance benefits were not funded by the union and would need to be paid for out of current union budgets.

“This is a handful of old retired vice presidents who felt entitled to leave their kids and their grandkids a couple hundred thousand dollars, expecting garment workers to pay for it,” Raynor said. “That was something I couldn’t do. It was immoral.”

Raynor said the idea that the retirees were working under the understanding that the benefits were part of their compensation was a “myth.” “The idealism of the garment unions was about immigrants and about the Jewish community in America,” he said. “It was not about, did they get a death benefit…. The salaries were reasonable. They made a living.”

According to public documents filed with the Department of Labor, Raynor’s compensation as the president of Workers United was $239,898 in 2009. The records also show that Raynor was paid $159,193 during the same period as General President of UNITE HERE.

Raynor clearly reciprocates the retired officers’ anger toward him. “There’s no principle here. These people were treated well by the ILG,” he said. “They want this because they want it and they have nothing else to do, and they’ve made a fight out of it.”

At meetings of the Retired Officers of the ILGWU after the life insurance benefits were cut, conversations were heated. “The discussions were, ‘How could they do this to us?’” Adler said.

Leaders of the group had known one another for decades. When reading the phone number of a fellow member of the Retired Officers to a reporter from his address book, Kushner gave the first two digits as letters.

The retirees hired an attorney who launched an administrative appeal when the insurance benefits were first cut. He filed suit in June 2003, after the benefits were cut to $5,000, with 144 named plaintiffs. It is this case that the retirees believe will finally be settled at the September 15 meeting, now that Raynor’s Workers United has reached a settlement with UNITE HERE in which liability for the case was transferred to UNITE HERE.

“We trust that you will work out the details with our committee by September 15 and put an end to the hardship that our families have suffered for the past nine years,” Kushner wrote in a letter to UNITE HERE President John Wilhelm.

The retirees say that Wilhelm has spoken to them of his intention to restore the benefits, but the retirees’ lawyer, Alfred Sigman, is less optimistic. “My clients believe, having met [Wilhelm], that he intends to negotiate in good faith,” Sigman said. But, he adds: “There appears to be a disconnect between Mr. Wilhelm and his attorneys.” In an August 19 letter to a magistrate judge involved in the life insurance case, Sigman complained that the union was not cooperating.

Representatives of UNITE HERE did not respond to a request for comment.

The September 15 meeting will be held in a UNITE HERE building on Seventh Avenue that historically housed the ILGWU. Retirees say they are hoping for a resolution, but they are able to continue their legal fight if necessary.

In the meantime, 40 of the named plaintiffs have died since 2003. “Every time we have a meeting — it’s almost funny if it wasn’t sad — we usually announce the passing of someone else,” Adler said.