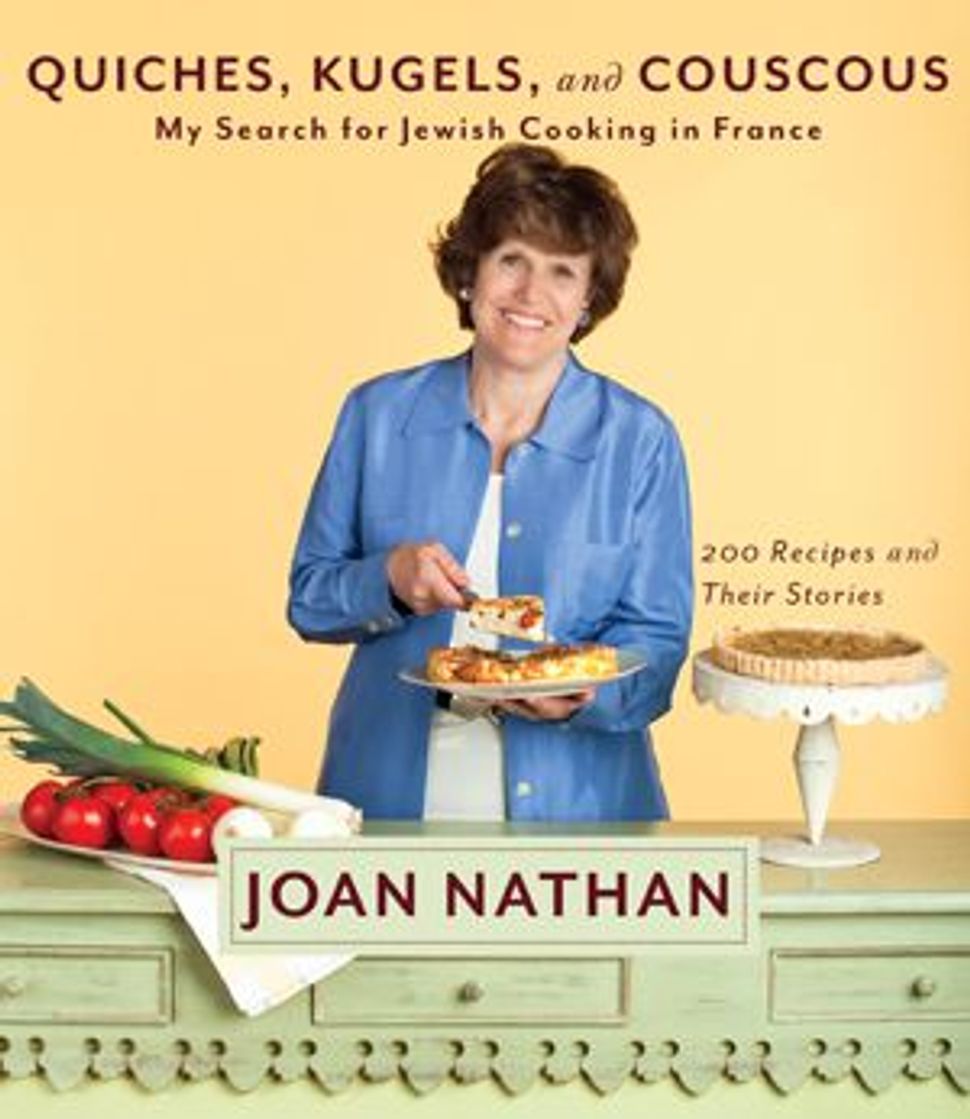 Author and Jewish food connoisseur Joan Nathan may be best known for her award-winning cookbooks on Jewish cuisine in America and Israel. But long before any of those projects began, there was Paris.

Like so many people, Nathan first fell in love with food in the City of Light, where she traveled as a teenager in the 1950s and was introduced to buttery tarts layered with plums, squares of softened chocolate pressed inside crusty baguettes, and decadent potato and cheese gratins. In her newest book, ?Quiches, Kugels, and Couscous: My Search for Jewish Cooking in France? (Knopf, $39.95), Nathan revisits this land of first food loves to explore the role that Jewish cooks played ? and continue to play ? in shaping the country?s celebrated culinary traditions. 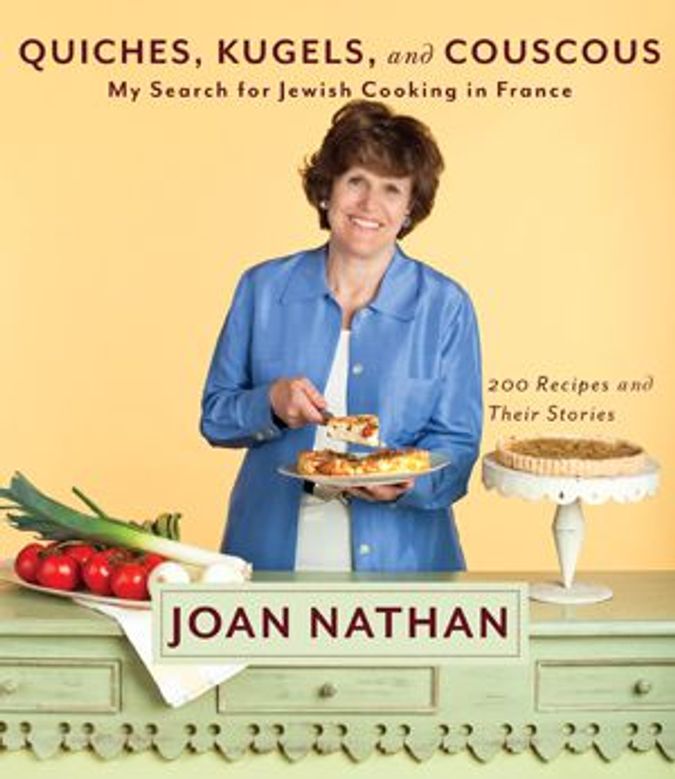 Despite her lifelong adoration of France, Nathan said she did not immediately think to explore the country?s Jewish connections. ?[For years] I was naively unaware of the history of Jews in the country,? she writes. She is not the only one. The French Jewish community is one of the oldest in Europe (dating back to the first century C.E.), and the country houses the world?s third-largest Jewish population, behind Israel and America. Still, French Jewish cooking does not claim the same global recognition as other European Jewish cuisines.

The reason, says Nathan, is a combination of the general French aversion to publicly expressing private matters, like religion, and the reverence with which all of France?s residents regard their national cuisine. French Jews ?think of the food they eat as simply French ? buying seasonal produce and, like all French people, almost obsessing about their next meal,? Nathan writes. ?They may go to a kosher butcher or grocery store, but they bring up their children to se tenir comme il faut, to have French manners at their beautifully set tables.?

Still, over the centuries, Jewish cooks and merchants, butchers and food producers have left a profound, if veiled, legacy on French cuisine. Chocolate, for example ? one of the foundational building blocks of French food ? was likely introduced to France in the 16th century by Jews who fled to Bayonne during the Inquisition. In Bayonne, Jews cultivated the use of chocolate for medicinal purposes and also became candy makers, thriving in the business until, as Nathan writes, ?little by little, other Bayonnais learned to make chocolate, and their numbers increased so much that in 1691 Christian chocolate-makers banned Jews from the trade.?

Similarly Jews were instrumental in popularizing the controversial French delicacy foie gras ? fattened duck or goose liver produced by force-feeding an animal using a technique called gavage (French for ?to force down the throat?). The practice was once deeply enough connected to France?s Jews that the medieval French rabbi and sage Rashi felt inclined to condemn it in a Talmudic commentary. ?Israel will one day pay the price for these geese,? he wrote, ??for having made these beasts suffer while fattening them.?

Nathan writes that the Jewish influence on French food continues today. In recent years, a new Jewish palate has settled in France, following the 250,000 Jews from former French colonies like Algeria, Morocco and Tunisia who migrated there after World War II. Along with other immigrants arriving from North Africa, these Jews have helped to introduce dishes like brik (a flaky filled pastry similar to a boreka), hearty tagines and couscous to France?s culinary lexicon.

Meanwhile, the young American expatriate chef Daniel Rose has helped bring flavors of the Jewish kitchen, creatively presented, to France?s dining elite at his popular Parisian restaurant, Spring. Nathan first wrote about Rose?s restaurant in 2008 for the New York Times, and the chef?s recipes ? like brandade potato latkes and brisket with ginger, orange peel and tomato ? feature prominently in her book.

Like all of Nathan?s cookbooks, ?Quiches, Kugels, and Couscous? travels much deeper than the plate. A delicious dish ? a savory babka with olive tapenade, say, or a Moroccan braised lamb ? might be Nathan?s gift to the cook, but it is the family histories and traditions she presents alongside these recipes that make the book valuable both inside the kitchen and outside it.

On a culinary trip to Israel last March, which Nathan led for a group of food writers (myself included), I had the opportunity to watch her at work, poking around our hosts? kitchens, inquiring about the origins of a beautiful mortar and pestle, or coaxing a recipe?s history from the memory of its cook. Her journalistic style is fueled by vigorous curiosity and, it seems, a personal mission to save endangered food ways and beloved dishes from extinction.

I have no doubt that Nathan?s research methods in France echoed what I witnessed in Israel. A recipe for chopped liver with a confit of onions is paired with the tale of Michel and François Kalifa, a husband and wife (he from Morocco, she the daughter of Polish parents who arrived in Paris after the Second World War) who run the 93-year-old Parisian butcher shop, Maison David. A presentation of cherry bread pudding includes the story of Françoise Tenenbaum, a deputy mayor of Dijon who coordinates meals for the town?s elderly residents. Readers meet Simcha Cohen, whose father cured his own caviar in Tunis, and Huguette Uhry from Alsace, who bakes a brioche for Rosh Hashanah that takes two days to complete.

If anything feels missing from the ?Quiches, Kugels, and Couscous? collection, it is the stories and dishes that were simply lost to time before Nathan arrived to capture them. The book, then, is a call to the kitchen ? but also a reminder to celebrate and remember the food traditions that bind us.

For a podcast with Joan Nathan, and for more recipes, visit the Forward and Hazon?s food blog, ?The Jew and the Carrot?.

This winter salad, published in Nathan?s ?Quiches, Kugels, and Couscous,? is a dish served by chef Daniel Rose during Hanukkah at his Spring Restaurant in Paris.

1. ?Using a mandoline or a sharp knife, slice the fennel very thin. Place it in a bowl of ice water and refrigerate for at least an hour.

2. ?Cut off the tops and the bottoms of the grapefruit and oranges. Slice off the peel and the white pith, and cut in between the white membranes to yield individual segments. Put in a large bowl and stir in the sugar, vinegar, olive oil and pepper.

3. ?Arrange the arugula on a serving platter. Drain the fennel well, pat dry and season with salt and additional pepper. Toss into the bowl of citrus segments and their vinaigrette, and toss to mix.

4. ?Spoon the citrus-fennel mixture on top of the arugula. Sprinkle with lemon zest, dill, parsley and mint. Serve immediately.