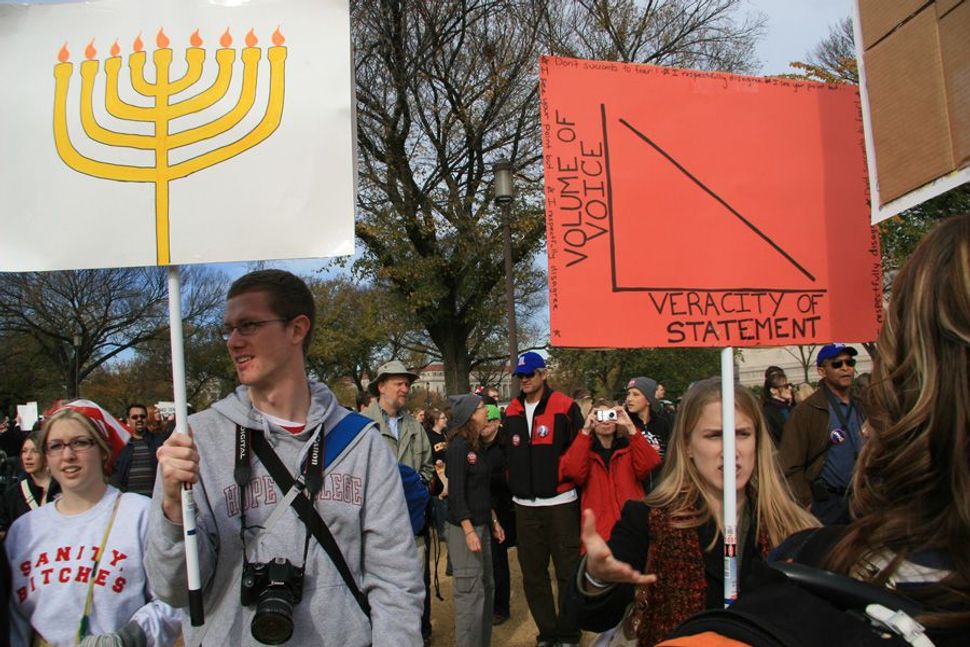 On Stage: Jon Stewart?s rally on The Mall on October 30, two days before the election, drew a crowd that reflected his regular audience ? predominantly white, left-leaning and young. Many carried handmade satirical signs. Image by GETTY IMAGES

But on October 30, they felt far more among their own. The two returned to the National Mall, where they joined an estimated 215,000 for Comedy Central satirists Jon Stewart and Stephen Colbert’s “Rally to Restore Sanity and/or Fear” — widely seen as a rejoinder to Beck’s event.

“Underneath the jokes and the satire is a serious message, which is that the political discourse in the country has gotten out of control on both sides, on both extremes. I support that message,” said Janofsky, 20, of Baltimore, as the crowd crushed in around her.

“I still think if you step back and think about this event, it’s very monumental, it’s culturally monumental that a Jewish American has really arrived, in a sense,” she said of Stewart. “He has so much influence.”

In the wake of the rally, however, it is precisely the question of how much influence Stewart has — or even seeks — that was at the center of much debate. For many, his rally only underlined these questions.

Set on a stage framing the U.S. Capitol, the event was essentially a comedic variety show imbedded at every turn with messages of moderation. It featured a series of musical acts and larger-than-life faux fear-mongering, care of Colbert’s archconservative caricature from “The Colbert Report.” Stewart, often Colbert’s straight man on stage, provided pointed criticism of politicians for inaction and the 24-hour cable news channels for sensationalism and political spin.

It was CBS News that estimated the crowd at 215,000, dwarfing its estimate of 87,000 at Beck’s rally. The gathering appeared to reflect Stewart’s regular audience: the predominantly white, left-leaning and young. Liberal organizations looked to exploit that demographic coming together, as the Huffington Post provided over 200 free buses from New York City, MoveOn.org doled out free hot chocolate, and Democratic groups tried to rope in get-out-the-vote volunteers just before the November 2 election.

Many in the audience presented self-aware and centrist posters, such as “I don’t think this sign will change your opinion” and “I don’t agree with you, but I’m pretty sure you’re not Hitler,” plus plenty of anti-Tea Party signs. Chas DeLong, 43, wearing an “I’m with reasonable” T-shirt, flew in from Seattle to be there. “I just want to throw my support behind the whole anti-tea bagger movement. I’m just so bitter about the right side of the country,” he said. 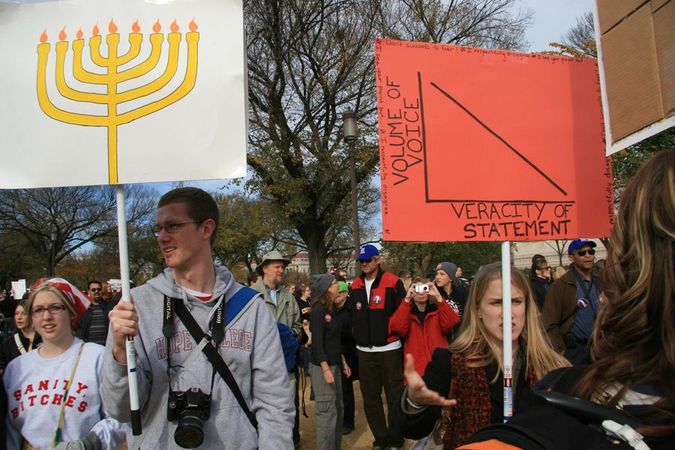 The presentation left many mainstream journalists confounded about the politics of the event.

“It was the first actual ironic rally I’ve attended,” wrote prominent blogger Andrew Sullivan on his blog on The Atlantic magazine website. “Most of those in this movement were clearly ambivalent about being in any movement, but at the same time seemed to be acting out of some shared civic duty. Almost every poster and placard was ironic, or undercut the ego or seriousness of the protester …. No one was demanding their country back; they were just demanding, well asking, for a little less polarization, and a little more mutual understanding. It was an Obama rally that didn’t want to be an Obama rally.”

Stewart, who routinely pokes fun at his Judaism during his “The Daily Show” satirical news broadcast, made no Jewish references during Saturday’s event, but that did not stop a few rally-goers from doing so for him. Bryan Lelan, 23, of Rockville, Md., brought a sign with a menorah on one side in honor of Stewart and a pitchfork on the other in honor of Colbert. Julia Caldwell, 18, from Cape Cod, Mass., brought a sign that said “God bless America” in Hebrew and Arabic.

But some questioned whether the comedians were justified in calling such a rally and whether Stewart and Colbert were crossing the line from entertainment to activism. “I think the arrogance of Stewart and Colbert has reached a point with this rally that I find appalling,” wrote David Zurawik, TV critic for The Baltimore Sun.

Geoffrey Baym, an associate professor of media studies at University of North Carolina at Greensboro who has written about Colbert and Stewart for years, sharply refuted such criticism.

“I think journalists are threatened by satirists,” he said, adding that as both comedians have grown in popularity, media pundits have tried to box them in. “If you ask me, it’s a turf war.”

The next day, the hosts of Fox News’ “Fox & Friends” — a frequent target of mockery by Stewart and Colbert on their own shows — seemed to unintentionally support this contention. “There was this big rally, put on by comedians, which many people unfortunately think are news people,” co-host Gretchen Carlson informed her audience, citing “Jon Stewart and — what’s the other guy’s name?”

More substantially, New York Times media columnist David Carr accused the two of making the absurdities of the cable news media — a fat target that many on all sides love to hate — their prime focus because their commitment to avoiding partisanship left the bigger, harder targets off-limits.

“Media bias and hyperbole seem like pretty small targets when unemployment is near 10%, vast amounts of unregulated cash are being spent in the election’s closing days, and no American governing institution seems to be above petty partisan bickering,” Carr wrote. “Mr. Stewart couldn’t really go there and instead suggested it was those guys over there in the press tent who had the blood of democracy on their hands.”

But Baym regarded Stewart’s speech at the end of the rally, a serious call for moderation and against the media selling processed fear, as a successful pitch to change the way people act and talk about politics in America. Many at the rally agreed, saying the event was a first step in showing the face of the silent centrist.

Nevertheless, Janofsky, Robinson and their friends left the rally with mixed reactions. Robinson said he was deeply disappointed, heatedly lamenting that Stewart had squandered an opportunity in front of a huge crowd to provide only a jumble of jokes and a music concert. Their friend, Harry Baumgarten, 23, a George Washington University graduate working in New York City, disagreed, saying the rally raised awareness for a potential centrist movement.

Janofsky said she was, as yet, unsure. “This show didn’t really know what it wanted to be,” she said. “It wasn’t a call to action, it was a pat on the back.”