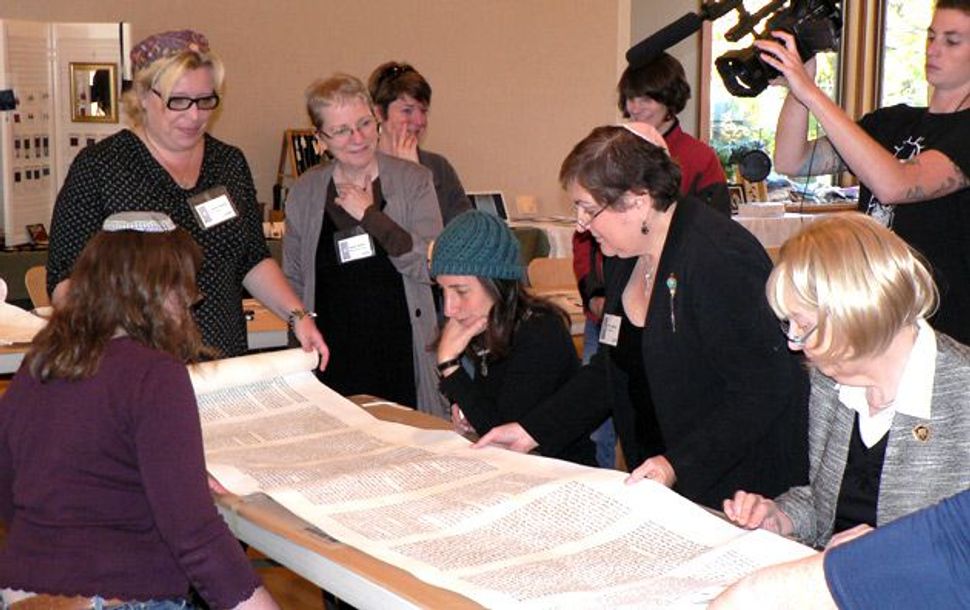 Finished Product: Around the table, clockwise from bottom left: Rabbi Rachel Schoenfeldt, one of the checkers of the Torah; Scribe Rabbi Hanna Klebansky; Kadima liturgist Sandra Silberstein; Scribe Julie Seltzer; Scribe Linda Coppleson and Scribe Irma Penn studying the Torah before attaching it to the eitzim, or wooden spindles, that hold it. Image by KAdIMA ReCONSTRUCTIONIST COMMUNITy

Nearly a decade ago, when the Kadima Reconstructionist Community, in Seattle, was looking for a Torah to purchase for its congregation, it decided to have one written by a woman.

This seemed like a reasonable request to the members of the small congregation, who knew female rabbis, female cantors, even female mohels. Women around them taught Torah, sang Torah, read Torah and learned Torah. Now they just needed to find a woman who wrote Torah.

“We began to look around for the unicorn that was the female Torah scribe,” Kadima member Wendy Graff said. “We eventually realized that the reason we couldn’t find a Torah written by a woman is that there were no female scribes.”

This, however, did not deter the congregation from its desire for a female-scribed Torah, and so in 2003, Kadima started the Women’s Torah Project, with Graff as its director, and issued the first-ever commission for a Torah to be scribed by a woman.

The Torah, which was finished this past October, was completed by a team of six scribes, part of the small but growing group of females around the world who have taken it upon themselves to write Torah despite limited access to formal training, and despite the fact that Jewish law prohibits it. Kadima’s new Torah joins the three Torahs independently scribed by Jen Taylor Friedman, which she started and finished since the time of the commission, making it the fourth Torah in history to be scribed by women.

Kadima originally intended for the Torah to be scribed by one woman, but when those plans fell through, it decided to involve a community of women around the world, including female scribes, or sofrot, in Israel, Brazil, Canada, New Jersey and California. All these women had formal training during which they learned the 4,000 rules needed to be upheld when scribing, from the way one cuts her quills, to the different formations for letters, to the level of intention required for each act. Many studied with men willing to teach women to write Torah, but not willing to read from a Torah scribed by a woman nor to issue any woman official certification. Most of the women are doing their best to make sure the Torahs they scribed — which, like all Torahs, are unsigned — do not end up in communities that would deem them unfit for use.

For Shoshana Gugenheim, the lead scribe on the project, the desire to write Torah started about 20 years ago, when the North Carolina native first spent some time in Jerusalem and became familiar with Jewish practice. Gugenheim, a 41-year-old artist, was taken with how emotional the physical contact with the text felt, and so she became interested in Hebrew calligraphy. In 1999, while doing research for an academic paper on the laws pertaining to female scribes, she started thinking about writing Torah herself. Gugenheim moved to Israel in 2000 and found a Hasidic man willing to train her secretly.

“It is very important for women to have access to Torah in any way that is fulfilling for them.… Getting to interact with claf [parchment] and letters was my way in. That is how I communicate with the world, through materials. When I see the Torah raised during prayer, I get goose bumps,” Gugenheim said.

Linda Coppleson, another scribe on the project, had spent years as a Jewish educator and calligrapher before learning how to write Torah. Coppleson, 60, studied with a Conservative rabbi and later with Taylor Friedman for about five years before she joined the project two years ago. She said that even though she has always been engaged in Jewish text through study and the writing of ketubot, or Jewish prenuptial agreements, and mezuzas, scribing the Torah felt profoundly different.

“It is easy to sound clichéd when you talk about spiritual things, but there really is this spiritual feeling you get, something about the way every letter is formed. It is like an athlete being in the zone, just a certain frame of mind you are in, and I know all the women feel the same,” Coppleson said.

The other scribes on the project included Rachel Reichhardt, who studied in Buenos Aires and is the only officially certified scribe of the group; Irma Penn, a Canadian artist who recently fulfilled a 40-year-old dream by learning to scribe in Jerusalem; Rabbi Hanna Klebansky, a native of the former Soviet Union who immigrated to Israel in 1996 and founded a house of study for Russian-speaking immigrants, and Julie Seltzer, the youngest of the group, who studied with Taylor Friedman and Gugenheim and is currently writing Torah in public as part of an exhibition at the Contemporary Jewish Museum, in San Francisco.

“A lot of it is knowing you aren’t the only one who wants to do this,” Taylor Friedman said.

And while the women are aware that this is a new practice and a departure from tradition and law, their practice is not, at its core, intended to be provocative.

“If I wanted to do a political act, there would be better things to do,” Taylor Friedman said. “This is a way for me to engage with my commitment as a Jew. It happens to be political, but that is a side-effect.”