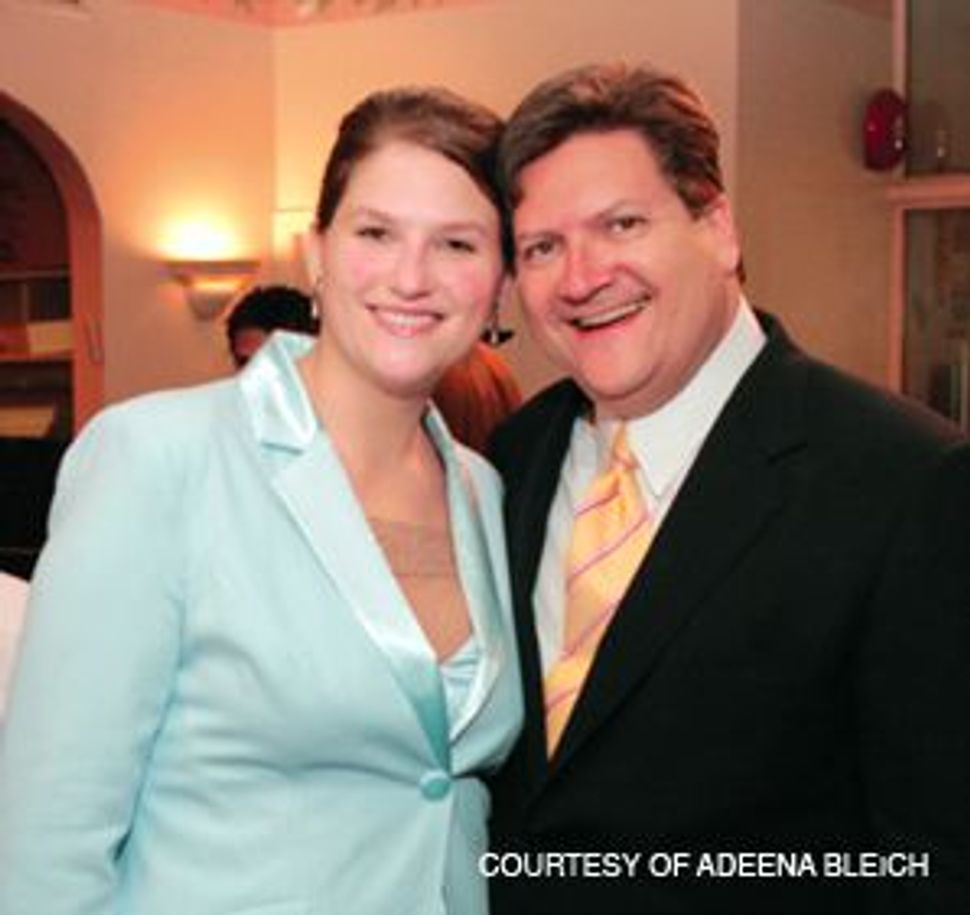 TODAY I AM A CANDIDATE: Bleich and former California Assembly Speaker Bob Hertzberg at a bar mitzvah in Hancock Park.

Los Angeles – Growing up in New Haven, Conn., just across the street from Senator Joe Lieberman, Adeena Bleich never thought it was out of the ordinary for an Orthodox Jew to run for political office. Now, the 30-year-old West Coast transplant is herself running for office in Los Angeles, angling to become the city’s first Orthodox Jewish city councilor. 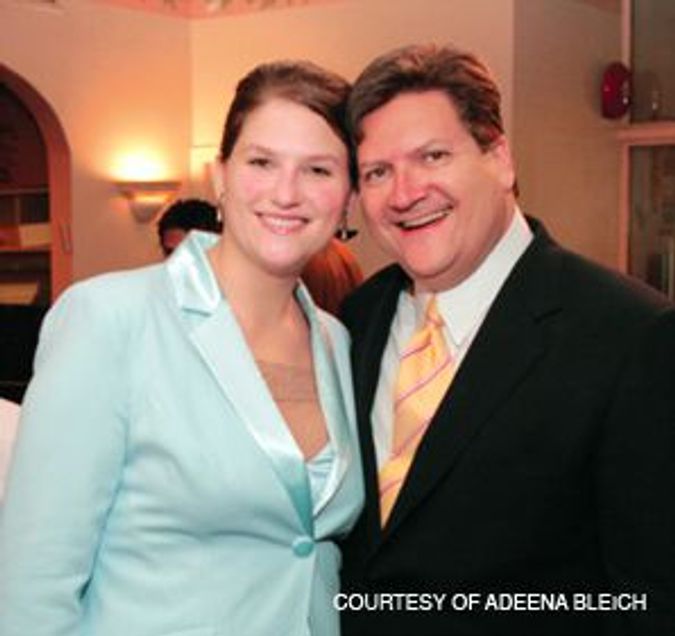 TODAY I AM A CANDIDATE: Bleich and former California Assembly Speaker Bob Hertzberg at a bar mitzvah in Hancock Park.

Bleich, the former Los Angeles area director of the American Israel Public Affairs Committee, announced late last month that she was leaving her post to run for the city council seat in L.A.’s heavily Jewish 5th District, which will be vacated in 2009 when Jack Weiss runs for city attorney. If elected, Bleich will become one of the few Orthodox Jewish women ever to hold a citywide office in a major American city.

Bleich is basing her campaign not on this historic detail but rather on the premise that she can serve the city’s multiple and diverse ethnic communities. Still, her bid opens a window onto the increasing maturation of L.A.’s burgeoning Orthodox Jewish community. In recent decades, the city’s Orthodox population, based in the neighborhoods known as Pico-Robertson and Fairfax, has seen explosive growth. Now, observers say, L.A.’s Orthodox Jewish community finally may be coming of age in the political sphere.

“There’s no question that the Orthodox Jewish community has grown by leaps and bounds over the last 20 years in L.A.,” said Rabbi Daniel Korobkin, a West Coast representative of the Orthodox Union. “As the community’s influence grows, its presence is more widely respected, and as a result, that could translate into a more formidable candidate from the Orthodox community.”

Indeed, Bleich is not the first Orthodox Jew to run for L.A.’s 15-member city council. A handful of them have tried before, albeit unsuccessfully. Bleich’s success, observers say, will rest on her ability to reach beyond the confines of the Orthodox community and win votes across ethnic lines as well as across the diverse grouping of Jews — from Orthodox to completely unaffiliated — who populate the West Side district.

“She’s running not as an Orthodox candidate, and not in a district that has enough Orthodox clout to carry her,” said Yitzchok Adlerstein, a professor of Jewish law and ethics at Loyola Law School and a longtime community observer. “She’s running as a person who happens to be Orthodox, who may have some vague rapport or strength there, but her appeal is going to have to be on her record, completely apart from any identity-politics considerations.”

In New York City, the population center for American Orthodox Jewry, Orthodox politicians — including Noach Dear and Simcha Felder — have long served on the city council, and the current speaker of the New York State Assembly, Sheldon Silver, is Orthodox. It was also in New York that an Orthodox woman, Susan Alter, was first elected to the city council in 1978, serving until 1993.

Political consultant Hank Sheinkopf explained that in New York, population density has been the key to having Orthodox Jewish representation dating back decades. Orthodox politicians represent heavily Orthodox areas — for the most part in Brooklyn — and they are elected along the lines of identity politics. A candidacy such as Bleich’s in L.A., where she is running on a wide coalition platform, has yet to materialize in New York. “In New York, it is more important that you have greater population density, because it is much more balkanized ethnically,” said Sheinkopf, who is based in New York. “Ethnic politics matter here.”

In interviews with a wide swath of political professionals who track Jewish representation and voting patterns, not one could cite an example of an Orthodox woman — aside from New York’s Alter — elected to the governing council of a major American city. At least one other Orthodox woman in New York, Judy Rapfogel, ran for city council, but her 1997 bid from the Lower East Side proved unsuccessful.

Thus far, four other candidates have announced their run for L.A.’s 5th District council seat, which includes the Pico-Robertson area, as well as swaths of the San Fernando Valley. Bleich is not only the sole Orthodox Jew in the race — which so far includes former city councilman Paul Koretz and neighborhood activist Ron Galperin — she is also the youngest. But Bleich said that her youth is not necessarily a disadvantage. “If you look at this district, it’s consistently the outsider candidate and the youngest candidate who has won,” she said.

Bleich, who moved to L.A. in 1999 after graduating from Pitzer College, worked as a field deputy and Jewish community liaison for Weiss for three-and-a-half years. In 2005 she went on to work for former California Assembly speaker Bob Hertzberg’s failed mayoral campaign. Hertzberg is now chairing Bleich’s nascent campaign. It was, Bleich said, through watching Weiss and Hertzberg at work that she came to understand the power of a committed public servant to effect real change and better people’s lives.

Bleich, who attends three Pico-Robertson area Modern Orthodox synagogues — B’nai David-Judea Congregation, Beth Jacob Congregation and Young Israel of Century City — also said that while working for Weiss, she came to see her Orthodox Judaism as a plus. “Overall, being Orthodox was a positive, particularly in this district, and in this city,” she said. The observant Jewish community “liked knowing that there was somebody there who understood their language and their customs.”

Now, Bleich said, she hopes to be a voice for the Jewish community at a wider level. “When I think that if, God willing, I were to win, I would be the first shomer shabbos person on the L.A. city council,” she said, “there is definitely a sense of pride.”