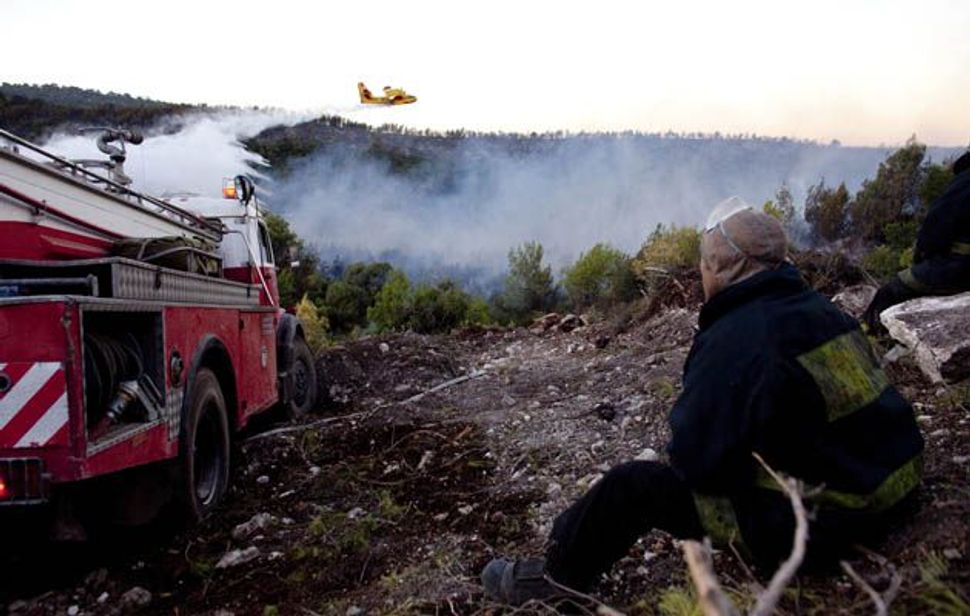 As Israel Burns: A firefighter watches as a firefighting plane flies over the outskirts of Haifa. Image by Getty Images

As the huge fire in northern Israel continues to burn for the fourth day, American supporters are formulating ways to help with the worst natural crisis in the nation’s history.

While local volunteers acting on personal initiative are ferrying packages of food from homes and restaurants for firefighters, as long as the flames are still burning, at the site of the blaze there is not much more for non-professionals to do. “Right now, it’s a job for planes, and without a plane there’s little that one can do,” Adi Zahavi, who coordinates overseas volunteer fire fighters, said with some frustration.

Zahavi, international director of the charity Emergency Volunteers Project, has 80 American firefighters — most of them non-Jewish — on standby, ready to fly to Israel at a moment’s notice. “Now it’s a matter of getting the fire out, but when this is done, when the firefighters who have been involved need to rest, that is when we come in,” he commented.

Similarly determined to help with the aftermath is the American Jewish Committee, which announced today that it is setting aside an “initial” $100,000. “We are focused on the morning after, on what we’ll be able to do in terms of recovery,” Edward Rettig, acting director of the AJC’s Jerusalem office, told the Forward. “Within a few days, God willing, the fire will be out completely and the real long haul is going to be rehabilitating people’s lives and the land.”

On Sunday afternoon at the University of Haifa, the ad-hoc control center for government and rescue organizations, looked out on thousands of charred trees and bellowing smoke, which cast an overwhelming smell over the campus. Firefighting planes whizzed overhead. The fire has killed 41 people, destroyed around 12,000 acres of forest, and claimed an estimated 5 million trees. Public Security Minister Yitzhak Aharonovitch indicated Sunday that firefighters are close to extinguishing the fire.

All the destroyed forest land is owned by Keren Kayemeth LeIsrael-Jewish National Fund and many of the trees were planted by overseas donors. While a significant injection of government funds for restoration is anticipated, it is not expected to cover the whole operation. KKL-JNF has launched a campaign to raise $10 million in America by Tu Bishvat, the Jewish “new year of the trees,” which falls on January 20. “It’s more than an ecological issue, it’s a moral issue,” said Alon Badihi, director general of the Israel office of JNF-USA, KKL-JNF’s American fundraising arm which is running the campaign. “This is because it’s a large green area of this desert country, a pearl that we need to restore for citizens.” Israel’s Tourism Ministry announced Sunday that it will help with the fundraising drive.

As well as setting aside the initial $100,000 — which Rettig hopes to start allocating to projects this week — the AJC has reopened its Israel Emergency Assistance Fund to enable individuals to contribute to the rescue and recovery efforts. The Fund was activated in 2006 during the Second Lebanon War, and again during Operation Cast Lead at the end of 2008. Donations, which can be made via the AJC website, are to be transferred in full to Israel without any deduction for the charity’s overheads.

While the main contribution of American Jewry is still to come, at least two initiatives are already helping people affected by the fire. The Jewish Agency, using money from various American Federations, including a special $500,000 donation from the Jewish United Fund in Chicago, is trying to restore some Hanukkah cheer to evacuated children by hosting a fair Monday with music and entertainment at Tel Aviv Fairgrounds for 1,000 children. “We feel it’s important to show these kids they are not alone but rather world Jewry cares about them,” Jewish Agency spokesman Michael Jankelowitz, told the Forward.

Selah, the Israel Crisis Management Center, which raises most of its funds in America, was one of the first organizations to comfort the bereaved, and is working with seven families of mourners. Selah specializes in providing support during crises to immigrant families, who tend to find it more difficult than native Israelis to secure the right support and who are more prone to feel isolated. “Selah has mobilized dozens of volunteers on the ground, primarily providing support for the immigrants families of victims of this terrible tragedy, who do not have the established networks of friends or extended family,” said Ruth Bar-On, executive director. “We have been at the homes and funerals of these families, giving emotional support and logistical help.”

Rettig said that the AJC’s funds will be deployed to assist re-foresting efforts in burned areas, to provide support for the bereaved, homeless or traumatized, and to prompt Israel to be readier for another disaster. “Israel has a wonderful bunch of volunteer groups and we’re in touch with them to find out what they need in terms of equipment for the next disaster,” he elaborated. “What lessons have we learned? All of our civil defense thinking has to be aimed at the big disaster that awaits us – the earthquake that awaits us.”

Rettig was referring to experts’ predictions that an earthquake is likely in the near future. In March, at the First Academic Forum on Emergency Management which was held at the University of Haifa, discussions focused on the fact that Israel has an average of one earthquake every 80 years, and the last one was 83 years ago. Avi Shapira, director of the Israeli Ministry of Infrastructure’s National Steering Committee for Earthquake Preparedness, told the Forum: “I hope that people believe me and my colleagues by now when we say that an earthquake will definitely take place in Israel and that it’s not a matter of ‘if’ but ‘when.’”