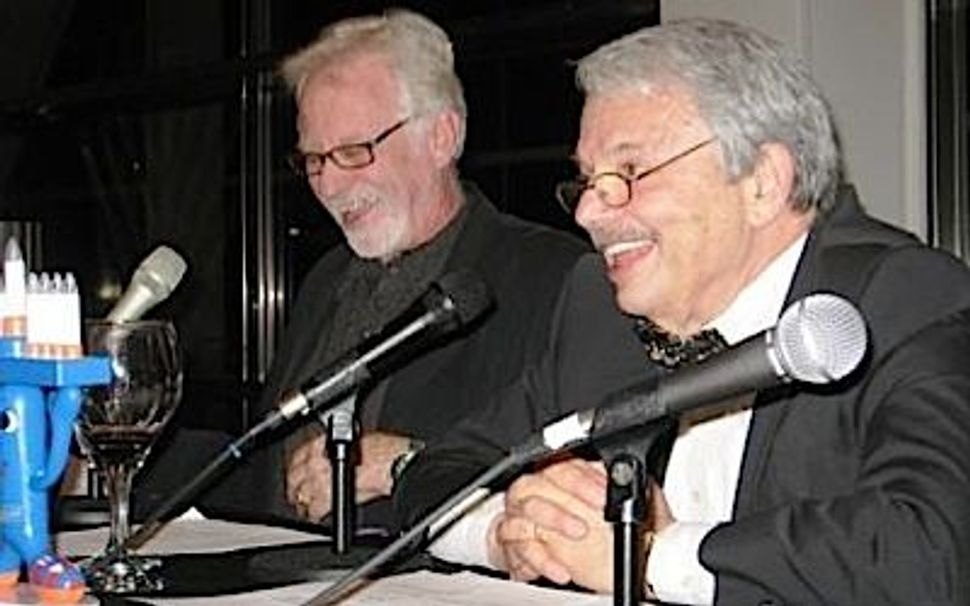 You don’t need flashing reindeer lawn ornaments to tell you it’s the happiest time of the year in Arkansas’s capital. Simply tune into FM 89 KUAR in December for the “Jewish Guys’ Chanukah Special,” with co-hosts Phil Kaplan and Leslie Singer.

The 60-minute annual shtick-and-music show, which is broadcast annually on the local public radio station, is considered a Little Rock Christmas tradition. Just ask the 300 people who attended the November 29 live taping of this year’s special, at the William J. Clinton Presidential Center.

“This show almost makes me want to be Jewish,” said one audience member, a man in a dark-green button-down shirt and red-and-green bowtie, as he munched on pre-show latkes, which he enjoyed but couldn’t identify. He and his wife were celebrating their 58th wedding anniversary by attending their fourth taping. The show will air on December 25. 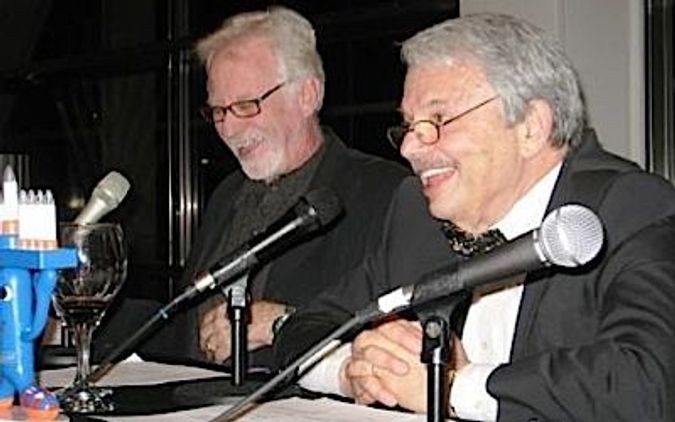 Singer, an advertising executive, and Kaplan, an attorney, have hosted their laidback winter variety show for 10 years. They perform original routines that poke fun at everything from cheap-o Hanukkah gifts to eccentric NPR hosts, and tell jokes old enough to have elicited groans from Judah Maccabee.

Dusky downtown Little Rock is visible in the tall windows behind Kaplan and Singer as they hold court from a raised table at one end of a reception hall. Think the old-time “Yiddish Radio Hour” meets “A Prairie Home Companion.” Indeed, the co-hosts’ Yiddish accents are strong, the pre-show buffet is tasty and the production values are almost above average.

With an estimated 1,500 Jews in Little Rock and 500 or so more living elsewhere throughout Arkansas, which is known as “the Natural State,” the co-hosts’ options for presenting local Jewish music are narrow but satisfying. Little Rock’s Meshugga Klezmer Band always appears, this year joined by vocalist Laura Rosenberg, of Hot Springs, Ark., and a surprise guest: Trinidad-born Darril “Harp” Edwards, who now resides in Little Rock, sat in with the band to perform perhaps the world’s first steel drum solo to “Bei Mir Bist Du Sheyn.”

Concert pianist Tatiana Roitman, a guest artist at the University of Arkansas at Little Rock, performed a medley that included a cheerful Russian Hanukkah song that differed starkly from her earlier conversation with Singer and Kaplan about the anti-Semitism she had faced as a child in Ukraine.

And that, in turn, contrasts with the acceptance that Jews feel in Arkansas. Jews have been leaders in Arkansas business, politics, education and interfaith activities, the co-hosts noted. “Rather than being ostracized, we’re a curiosity,” Singer said. “Jewish people are generally considered pretty interesting folks. They [non-Jews] like to know about us.”

KUAR station manager Ben Fry, who is not Jewish, agrees. “For people in Arkansas, Judaism is not particularly well known,” he said. “The percentage of Jews in Arkansas [less than 0.001%] is fairly small compared to the East Coast. Leslie and Phil take something that’s not that familiar to people and make it fun. They provide a really fun view of this particular culture.”

The two hosts do a lot with the raw material from which they have to work. Little Rock is Arkansas’s largest Jewish community, with a Reform synagogue, a traditional synagogue and a Chabad House. Bentonville, the Walmart headquarters town, has a Reform synagogue and a Chabad House. Synagogues also operate in the state in Fayetteville, Fort Smith, Hot Springs, Jonesboro and McGehee. A congregation meets monthly in Pine Bluff, according to Suzanne Berkovits, executive director of the Jewish Federation of Arkansas. The federation raises and allocates funds statewide.

Guests at the taping paid $4.99 each for the show, a glass of wine and a buffet of latkes, bagels with shmear and rugelach, prepared by Clinton Presidential Center chef Mike Selig, an Arkansas-born Jew. “People come to the show ready to have a good time,” Kaplan explained. “We stoke them up on fressing and drinking. They’re gonna laugh, even if the show’s not so funny.”

Usually the show is funny, in part because Singer and Kaplan will try almost anything. Their respective late mothers used to be regular guests. “Once they had a smackdown, a bubbe smackdown,” Kaplan recalled. “Leslie’s mother proposed a recipe, I think, for latkes. My mother made this assertion: ‘Never!’”

Singer’s memory of the event is “two old Jewish women arguing on the air about the right way to prepare latkes.” The sons didn’t dare choose a winner, but Kaplan said that his mother “had a claim of authenticity in that regard, because my folks had manufactured kosher foods in Revere, Mass.”

“I grew up the son of a kosher butcher” who owned Myer’s Kosher Kitchen, said Kaplan, 72. He moved to Little Rock in 1968 to work as an attorney. Singer, 68, grew up in the Bronx and on Long Island. He drummed in the rock band The Unspoken Word and moved to Little Rock in 1972, soon getting into advertising. Both hosts have been involved in Jewish and civic activities.

The co-hosts were barely acquainted when they first teamed up on KUAR in 1995 as volunteer on-air fundraisers for the station. “I can’t recall whether it was a shadchan [matchmaker] who put us together or if we put us together,” Kaplan said. “It’s lost in the sands of time.”

Singer recalls only that “we found ourselves doing the same fundraisers and with the same complaint: They were terribly boring. I said to [Kaplan] before we went on, let’s do it as a radio show, ‘The Two Jewish Guys on Public Radio.’ We’ll tell jokes and do shtick and stories about growing up Jewish. It really caught on.” Besides the Hanukkah special, they continue their fundraising shtick twice a year and “generate a lot of revenue,” Fry said.

The Hanukkah specials began in 2001. “Leslie and Phil would always complain that they didn’t have enough time [on the fundraisers],” Fry said, “so about 10 years ago, during a pledge break, I walked in and said: ‘You guys are so smart. What if I gave you an hour in December to do a Hanukkah show?’”

The rest is Little Rock Christmas and Jewish history.

The “Jewish Guys Chanukah Special” will air on Saturday, December 25, at 2 p.m. on KUAR FM-89. To hear it streaming online, visit www.kuar.org.