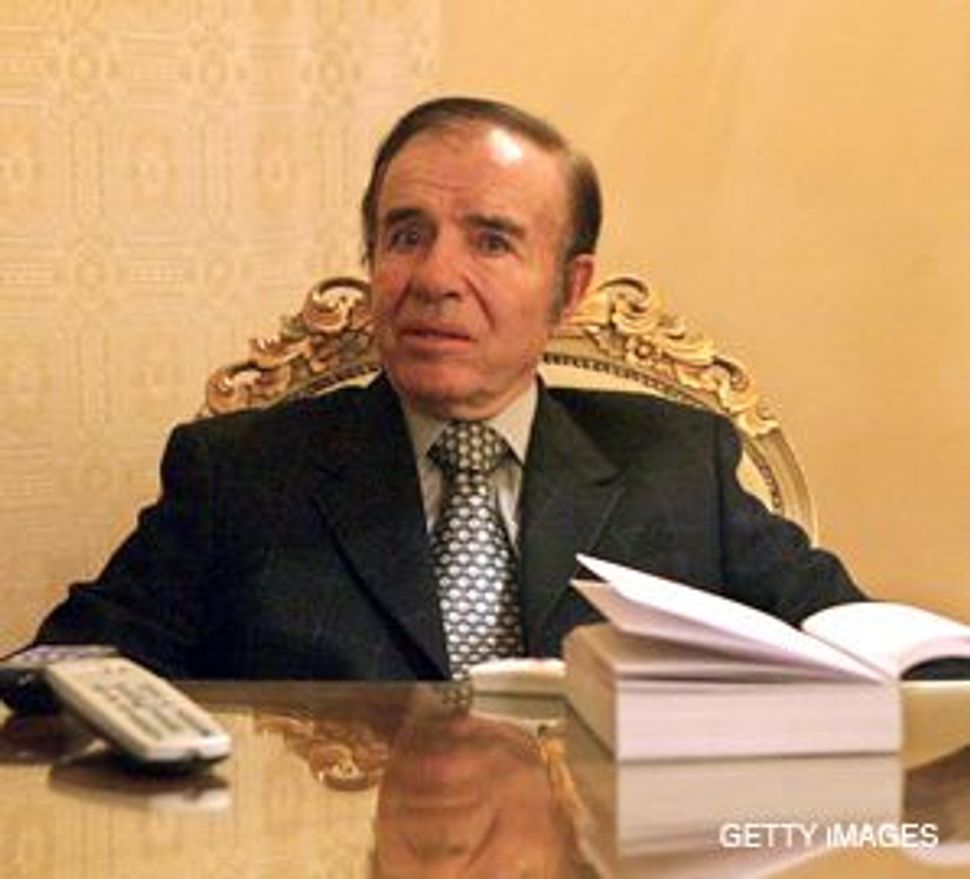 UNDER SUSPICION: Carlos Menem, Argentina?s president from 1989 to 1999 is being accused of a cover-up connected to the attack.

A prosecutor in Argentina is seeking the arrest of the country’s former president and several of his aides on suspicions that they were involved in a cover-up after the 1994 bombing of a Jewish community center in Argentina. 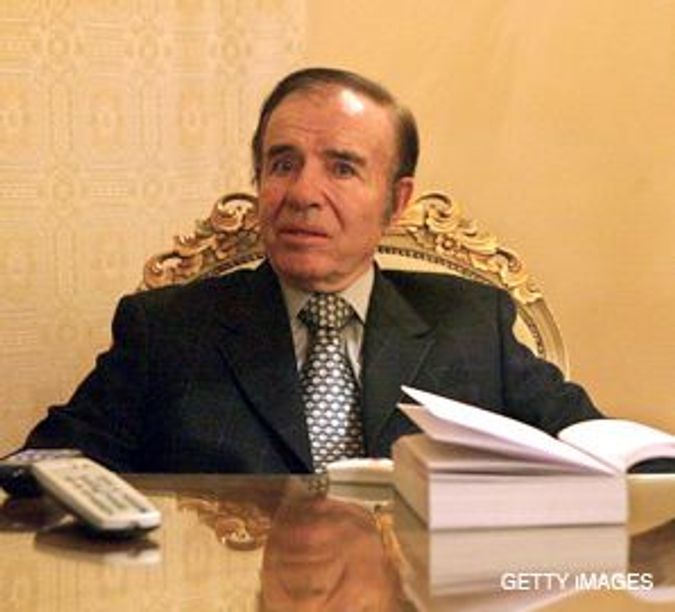 UNDER SUSPICION: Carlos Menem, Argentina?s president from 1989 to 1999 is being accused of a cover-up connected to the attack.

Alberto Nisman, a longtime prosecutor on the case, claims in a petition filed last week that the former president, Carlos Menem, gave a direct order to protect Alberto Kanoore Edul, a textile entrepreneur whose family hails from the same Syrian town as Menem’s and who was an early suspect in the attack, which killed 85 and wounded more than 300.

Nisman has asked investigative judge Ariel Lijo to arrest Menem and his brother, as well as three key players in the initial probe: the lead magistrate, police commissioner and intelligence chief.

The 77-year-old Menem, who is now a senator, has denied the charges and accused the administration of President Cristina Kirchner of using them to deflect attention from its current internal struggles. The decision on whether to press charges will be made by the judge and is expected in June.

Regardless of his decision, this latest development serves as a stark reminder of how the case surrounding the bombing of the community center — known as the AMIA — continues to be a political football as the 14th anniversary of the bombing approaches.

“Because it has never been thoroughly investigated, this case has been politicized over and over again all those years,” said Gabriel Levinas, the author of a book on the July 1994 bombing and a longtime critic of the probe. “And every time we come close to the anniversary of the attack, we inevitably see some supposedly new developments.”

While some associations of family victims have long suspected Menem, who was in power from 1989 to 1999, of a cover-up, last week’s arrest request was the first time that he has been formally accused of direct intervention. For years, some of Menem’s adversaries have claimed that the reason for his involvement was to push aside evidence that the bombing was the result of a dispute between Menem and Syria.

In the past few years, Argentina has issued two indictments accusing Iran and Hezbollah of carrying out the attack, along with several arrest warrants for high-ranking Iranian officials and Hezbollah operatives. Iran has repeatedly rejected the accusations as an Israeli-American fabrication.

Nisman told the Forward that the charges against Iran and Hezbollah were still valid and being pursued aggressively.

“This does absolutely not change the accusations against Hezbollah and Iran… and there is no evidence against Syria,” Nisman told the Forward. “To a certain degree, it reinforces them, because Kanoore Edul has many links with Islamist extremists.”

He noted that the new evidence only sheds light on the local support network, which has been a controversial issue for years in Argentina.

Several Argentines, including a car thief and a group of Buenos Aires policemen, were initially accused of abetting the perpetrators. They were acquitted after their trial in 2004 when a federal court accused Juan José Galeano, the judge handling the case, of authorizing a bribe for a key witness.

The man Menem is accused of protecting, Edul, was arrested soon after the bombing, because of his alleged ties to two suspects. Phone intercepts allegedly show that Edul made a call to Carlos Telleldin, a car thief believed to have supplied the terrorists with the van that rammed into the AMIA building. The call was made on the day Telleldin allegedly handed the van to the terrorists, according to Argentinean prosecutors.

Galeano, the lead magistrate at the time, contends he thoroughly looked into Edul’s activities but failed to come up with clear evidence of his involvement in the attack.

Nisman apparently has been able to find some new evidence, including wiretap transcripts that had been missing for years. In his petition, Nisman affirms that Menem’s brother Munir called Galeano and ordered him to leave Edul alone on the day Edul’s father visited the presidential palace.

Galeano denies ever receiving such a call.

“This is sadly yet another attempt to redirect the public’s attention from the real members of the local connection, which were security forces that I identified,” Galeano, who was disbarred and is himself being investigated, told the Forward. “It is obviously not convenient to have the local connection focus on Argentinean corruption but instead on someone with the Syrian name Kanoore Edul.”

In the new developments, Edul is not being formally charged. Nisman said that there was not enough evidence against him for now.

“The scheme to cover up and to erase evidence was such that it makes it very difficult for me to find solid ground to request the arrest of Edul,” he told the Forward. “But despite those difficulties, we are probing it and we hope to get there.”

Several Jewish organizations and associations of family victims welcomed the move against Menem and expressed guarded optimism that it could help solve the case.

“We are happy to see the case is moving; we don’t know if this will lead anywhere, but it’s worth trying,” said Adriana Reisfeld, who lost her sister in the bombing and is a leader of the victims’ group Memoria Activa.