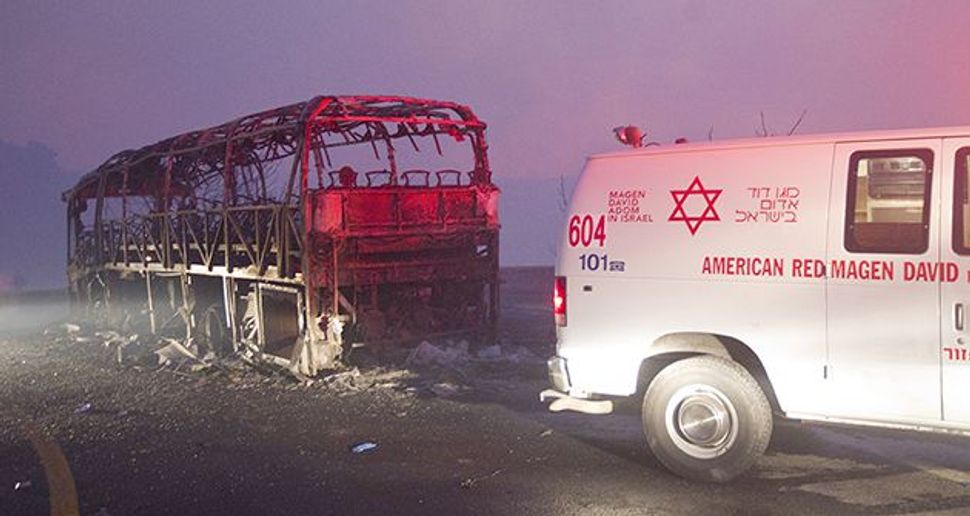 First Responder: A U.S.-funded MDA ambulance rushed to the scene last December after a bus carrying prison guards was trapped and incinerated in a huge forest fire in northern Israel. Image by Getty Images

A long-running feud between Israel’s equivalent of the Red Cross and its American fundraising affiliate is coming to an acrimonious end that is expected to result in the Israeli group increasing its influence over the American-based charity.

Magen David Adom, Israel’s leading provider of emergency medical help and blood services, is expected to renew its contract with American Friends of Magen David Adom, the American organization that raises more than $20 million annually for the Israeli group.

But on January 19, all five members of AFMDA’s executive committee resigned, warning that the renewed partnership could come at the heavy price of lost independence and possible abdication of the American group’s legal responsibilities as a charity certified in the United States.

“We felt we needed to draw a line in the sand on the issue of independence,” said Lewis Krinsky, who resigned from his post as national chairman. Miriam Sparrow, the executive committee secretary who also resigned, added, “As stewards to the donors, we have the responsibility to ensure oversight and accountability of donated funds through the implementation and enforcement of robust systems and processes.”

In the wake of the executive board members’ resignations, Arnold Gerson, AFMDA’s CEO, told the Forward that he believed a new contract agreement was imminent. Such an agreement now seems easier to achieve, since the departing board members were considered the most adamant opponents of the Israeli group’s demand for more influence on the board.

The remaining 15 board members were to meet on January 26 to elect board member Mark Lebow, a former AFMDA chairman, as interim chairman. Neither Lebow nor several other remaining board members returned calls from the Forward seeking comment.

The executive board resignations mark the end of a long tug-of-war between the Israeli group and its American affiliate. For years, members of the two groups set out to project a united front devoted to the purpose of providing emergency medical assistance to Israelis in need. The partnership, which dates back some 71 years, prior to Israel’s independence, has underwritten countless ambulances, clinics and crisis intervention services in Israel.

But while leaders of the Israeli organization and of its American benefactor were cutting ribbons for new medical centers and posing in front of ambulances donated by American families, they questioned each other’s intentions and honesty in meeting rooms and e-mail exchanges.

Their disputes boiled down to issues of power and control.

The resigning board members argue that Israel’s MDA views AFMDA as purely a fundraising arm. In line with this view, they say, MDA has expected the group in the United States to simply provide funds for its operations in Israel. AFMDA insisted that donors and American tax authorities expect it to conduct its business as an American group and to adhere to tough U.S. oversight standards.

The main issue in dispute has been AFMDA’s strict allocations process, which provides funds for projects in Israel only after those projects are actually carried out. The American organization considers grant requests from MDA, and if they are approved it allocates funds. But the money is paid directly to vendors and contractors, and only after those vendors present invoices for the job done. This, AFMDA believes, ensures full control and fiduciary oversight of their donors’ dollars.

MDA has frequently expressed its displeasure with these funding practices. The Israeli group has argued that AFMDA is holding a huge cache of money that donors believe is going directly and immediately to Israel, while in actuality is it waiting — at times, for years — for approval by the American body.

Another factor contributing to the mistrust that some AFMDA officials harbored toward their Israeli counterparts is an ongoing criminal investigation in Israel against Eli Bin, CEO of MDA. Bin and MDA’s chief financial officer, Ofer Dan, were arrested June 29 of last year and accused of tax evasions totaling 175 million shekels ($49 million). “It raises the question [of] if we can trust these people with our donors’ money,” said a source close to the AFMDA board, who spoke on condition of anonymity because of the sensitivity of the ongoing negotiations between the two sides.

The mutual charges drove a wedge between the two groups and led to a falling-out among board members within the American group.

Since talks on renewing the seven-year contract between the two groups began more than a year ago, MDA has been threatening not to renew the agreement unless certain changes were made. These, according to sources involved in the talks, included allowing the Israeli group to nominate four members to AFMDA’s board. The group’s executive committee members feared that this move would eventually give MDA control of the board and allow the Israelis to ease controls over the use of funds raised in America.

MDA in Israel did not respond to requests for comments on these issues.

The contract between the two groups officially expired on January 15. AFMDA’s board met in New York the same day, in a last-minute attempt to save the relationship with the organization’s Israeli partner. The meeting, which was also attended by Bin and by lawyers representing MDA in Israel, was described by one source as “nasty,” and ended with no results.

Since at that moment, AFMDA was no longer the American representative of Israel’s MDA, the group immediately took down its website, posting a brief message that said the site is undergoing maintenance.

Afterward, representatives of both sides worked out an interim agreement extending the contract for 45 days. During this period, AFMDA will be allowed to continue its activity as the sole representative of MDA in the United States and will continue its fundraising activity. The American group also agreed to approve MDA’s budget for 2011, thus ensuring that all funds promised for projects in Israel will be provided.

It was after the heated January 15 meeting broke up that all five members of AFMDA’s executive board resigned, stating in their letter that they “refuse to abdicate or compromise in any way our fiduciary duty to AFMDA and its donors.” As a result of these resignations, an AFMDA insider said, those who support more flexibility toward the Israelis are now in the majority.

Gerson said that the executive committee members resigned because “they felt that to a certain extent, they’ve become a distraction, and that is why they felt it would be better to step aside.” Gerson, who took over as CEO last October, said he was unaware of any demand from MDA to change the allocations process. Nor was he concerned about the ongoing criminal investigation against the head of Israel’s MDA. “We are not trying to govern MDA in Israel,” Gerson said.

In a letter sent January 19, AFMDA sought to reassure its donors that the latest unrest would not affect the group’s work. “We are negotiating a long-term agreement with all the same fiduciary safeguards we have maintained in the past,” the letter said. “Our Board is united in its goal to help ensure that Israel’s people will continue to be served loyally by AFMDA through our fundraising for MDA,” wrote Robert Kern, AFMDA’s director of marketing and communications.

When asked by the Forward if they would still advise donors to give their money to AFMDA, resigning leaders Krinsky and Sparrow were cautious. “As long as the allocations process is kept, the donors should feel comfortable,” Sparrow said, “but if the process begins to erode, I would have less confidence.” Krinsky added: “I don’t predict doom and gloom. Our issue is only with MDA’s leadership, and they have to clean up their house.”