Tireless Activist for Soviet Jews Now Needs Lifeline of Her Own 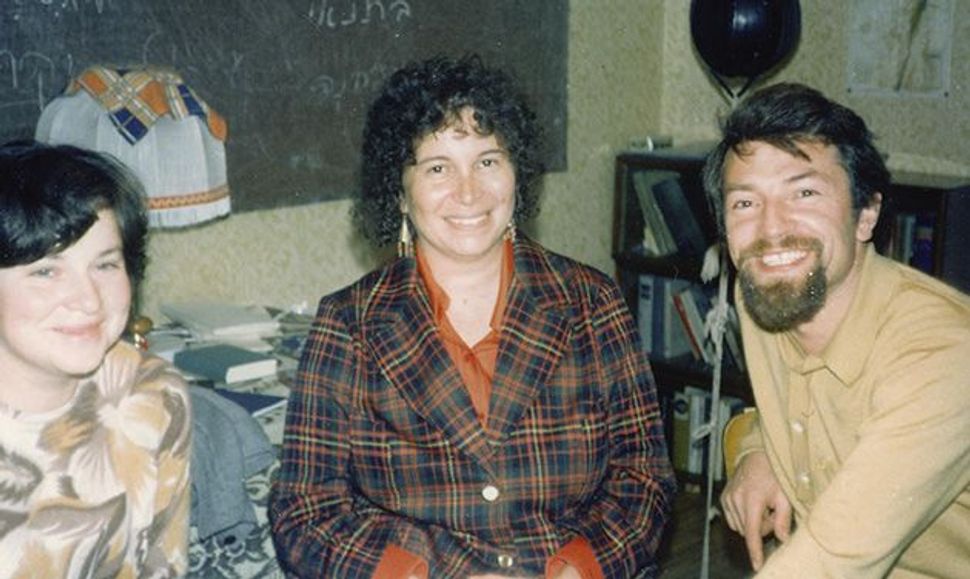 When I started working on my history of the Soviet Jewry movement almost seven years ago, the task seemed overwhelming. I was a young writer, just 27, attempting to tell an epic story that took place over three decades (mostly before I was born), involved a cast of thousands and demanded I describe how the Cold War was lived in America, the Soviet Union and Israel. But most daunting of all was the fact that this history was still so fresh. I never heard just one version of a Soviet Jewry story. I heard always at least five, with each narrator claiming a monopoly on the truth.

I needed a navigator, someone I could trust completely, a sounding board who would help me weave my way through this history without feeling the need to put herself at its center. I found that person in Enid Wurtman.

It’s unusual for me to take to these pages in the first person, but there is something special about Enid that requires it. Not only has she spent her life as a tireless activist, but she is also one of the most selfless individuals you could possibly meet — never simply devoted to the abstract notion of a cause, but rather to improving and helping the lives of those who are at the heart of it.

She also is in a serious health crisis. About a year ago, she was diagnosed with kidney failure. She now goes to long dialysis sessions three times a week. Her name is on the waiting list for a kidney donation, but at this rate that will take eight years. Enid is 68, and the doctors tell her that is just too long to wait. She needs a kidney from a donor now.

I first walked into Enid’s office in Jerusalem in the spring of 2005. I handed over a list of a few hundred names of former refuseniks — Jews who had applied to leave the Soviet Union and were refused — who I was hoping to speak with. To my surprise, a day later, Enid gave me phone numbers for all of them. She seemed to intimately know everybody in this community.

And not just that. As I was talking with her, in ambled Yuli Kosharovsky, a man who had lived in refusal for nearly two decades in the Soviet Union and had run a risky network of underground Hebrew language learning classes. He now looked like a disheveled professor, though minus the Trotskyite goatee he was wearing in a photo plastered onto an old protest poster leaning against one wall of her office. The two teased each other mercilessly. He called Enid an “American barbarian” when she served lunch on paper plates, and she shot back that he was a “male chauvinist.” It was clear from the banter that they had known each other a long time. When I asked them when they first met, they answered in unison: 1973.

That was the year Enid, a social worker, and her husband, Stuart, both in their early 30s and from Philadelphia, made their first visit to the Soviet Union, an eight-day trip to Moscow and Leningrad. It changed their lives. They met Soviet Jews who had been denied exit visas and were suffering all kinds of deprivation — losing their jobs, having their children thrown out of universities, their telephones cut off. Enid immediately identified with them. She felt as if she were seeing an alternate vision of how her own life would have turned out if her grandparents hadn’t left Russia. And she decided that she had to devote herself to helping these new friends.

Back in Philadelphia, she became involved with the local Soviet Jewry organizations and returned to the Soviet Union two more times in the 1970s to visit Yuli and others. One of her contacts was Anatoly Shcharansky (now Natan Sharansky), the charismatic, young spokesman of the activists. After a trip in 1976, she brought out a tape of Shcharansky rambling sweetly to his wife, Avital, then far away from him in Israel. On it, he says, “Enid asks how to help us. Yes, many people love us.”

In 1977, Enid herself made aliyah with her family. She felt she could no longer fight for others who were being denied the right to live in Israel while not taking the step herself. She never stopped working for Soviet Jews though, organizing protests, writing a column for the Jerusalem Post and keeping track of all the details of the activists’ lives — who was being detained, who was sick, who needed financial help. Yuli said there were years when they spoke on the phone every other day.

“Because of people like Enid, we could stand all the suffering,” said Yuli. “If these two million came out to freedom and if several thousand didn’t die, it’s thanks to people like Enid. She was completely devoted, crazy to the point where no logic, no family could stop her from helping us. It was almost an obsession.”

What is most remarkable, though, about Enid is that even after Soviet Jews began arriving in Israel in the early 1990s — including Yuli, whom she greeted at the airport — she refused to stop her advocacy. So many activists decided that the story was over when the Soviet Union ceased to exist. But hundreds of thousands of Jews needed to be absorbed and — what struck Enid so distinctly — often those refuseniks who were the heroes of the movement needed the most help. After years of struggle, they had lost their professions and many found themselves destitute, unable to subsist on the pensions provided them by the state.

She started a fund, Emergency Aid for Refuseniks, and has worked tirelessly, while earning no income herself, keeping track of those former activists who need some kind of welfare and making sure they get it.

According to her old friend, Sharansky, “No one spent more energy in Israel to help those former refuseniks than Enid.”

Another fan of Enid’s, the historian Sir Martin Gilbert, told me: “She is the most selfless person I know. Not once in the quarter-century that we have worked together has she asked for anything for herself.” He also said that, “her efforts on behalf of those former Soviet Jews now in Israel who have fallen on hard times was, and remains, outstanding.”

Filmmaker Laura Bialis, who made a documentary about the movement called “Refusenik,” was also helped enormously by Enid, whom Bialis has come to think of as one of her closest friends. She marveled at the endless stream of people who showed up at Enid’s bedside after her first serious battle last April with kidney failure.

“Every time I came to visit her, there were at least another three to five friends by her bedside,” Bialis wrote in her own appeal for Enid. “Every time I called to check in — different people were there. I suppose I shouldn’t have been surprised. She has touched so many lives — hundreds of people must have come to visit, and some of them came day after day. We were all shocked and saddened that our pillar of support, this amazing, unstoppable force of nature, was in such a serious condition.”

Enid remains a modest woman, now a grandmother of six, who continues to work even through her illness. But she badly needs a kidney transplant. And it would seem to me — someone who has chronicled some of the great work she has done in her life and been touched personally by her incredible generosity — that if anyone deserved the help of others, it should be her.

If you have information on potential kidney donors or would like to inquire about helping Enid Wurtman, please contact enid@wurtman.com

Gal Beckerman is the author of “When They Come for Us, We’ll Be Gone: The Epic Struggle to Save Soviet Jewry,” which was published in September. He can be reached at beckerman@forward.com or on Twitter@galbeckerman

Tireless Activist for Soviet Jews Now Needs Lifeline of Her Own