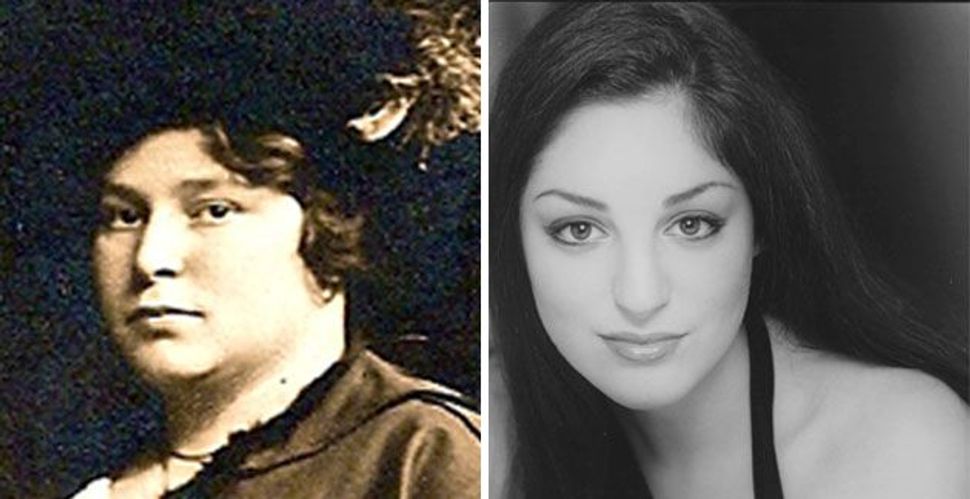 Legacy: Rebecca Keren (right) who is performing in the ?From the Fire? oratorio is the great-granddaughter of Rose Bernstein (left), who was employed by the Triangle factory. Image by Rebecca Keren/Melissa Hamburg

Like all other mornings, on March 25, 1911, Rose Bernstein had planned to arrive at 245 Greene Street, in Manhattan’s Greenwich Village, and begin working.

Instead, a sibling fell ill, so she stayed home — thus avoiding the tragic fate of other colleagues who died or were injured in the Triangle Shirtwaist Factory Fire later that day.

At least that’s the story her daughter passed down the family tree, a story that moved Bernstein’s great-granddaughter Rebecca Keren — who is preparing to perform in the oratorio about the fire that could have killed her ancestor.

“I feel a great connection to the piece,” said Keren, an actress with the National Yiddish Theatre — Folksbiene.

Keren first met “From the Fire” composer Elizabeth Swados when Keren played a possessed girl in “The Dybbuk.” “From then on, Liz and I have been working together in various capacities,” she said. They co-conceived two musicals, and Swados composed music for a script that Keren wrote.

Keren knew that the Triangle project was coming up. “I wanted to be a part of it because of my Jewish background, and my own personal feelings of connection to the horrific event,” she said.

So she put her Yiddish skills to use, supplying most of the piece’s Yiddish words through many of the script’s revisions. At one point, a scene between the shop manager and his wife was cut. “I thought I could supply some of the dialogue in Yiddish,” Keren said, so the scene was brought back into the oratorio. She plays the manager’s wife.

As the great-granddaughter of a Triangle factory employee, she is pleased to say, “We really get it right.” Many of the lyrics in “From the Fire” were taken from the public record. “This piece is authentic and accurate,” she said.