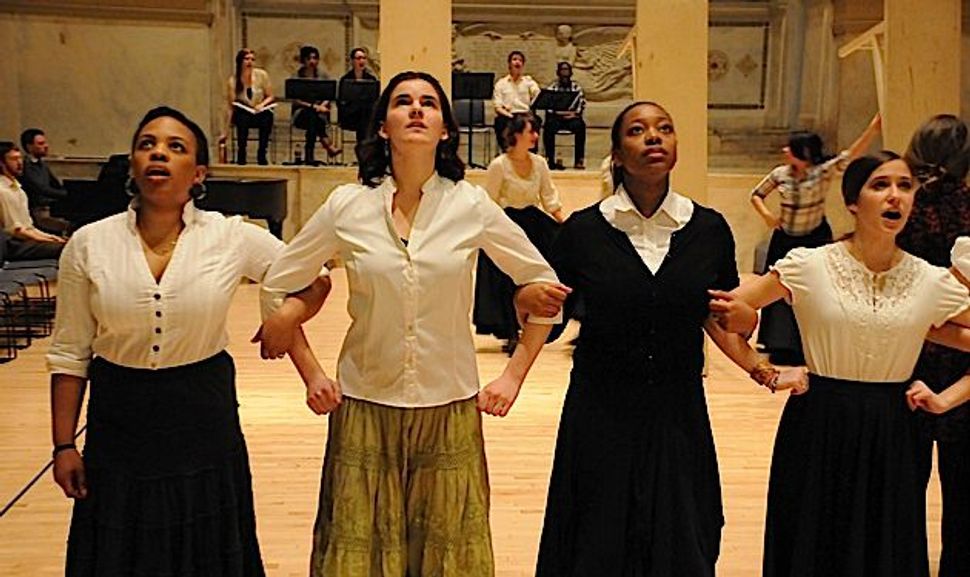 From The Fire: To create an original oratorio for the centennial of the Triangle Shirtwaist Factory Fire, Elizabeth Swados turned to raw instinct. Her cast sings songs that memorialize victims and imitate factory noises. Image by ANDREW SMRZ

Composer Elizabeth Swados has dramatized tragedy before, but never the fear that rises from the gut when flames are sweeping nearby and escape is far away.

In creating the music for the most terrifying moments in an original oratorio for the centennial of the Triangle Shirtwaist Factory Fire, Swados turned to raw instinct.

Watch a video of the performers practicing:

The blaze that consumed the Triangle Waist Company on March 25, 1911, left only bad choices for more than 60 workers who jumped from the upper-story windows to their deaths. Though the fire was brought under control in 18 minutes and extinguished within a half hour, 146 young immigrant workers were killed.

To mark the anniversary and bring attention to contemporary examples of unsafe working conditions, the 75-minute dramatic oratorio, “From the Fire,” will be presented in New York City on five evenings, beginning March 23. The piece will tell a story that captured the imaginations of four artistic women.

One of them, Cecilia Rubino, remembers walking past New York University’s Brown Building, former home of the ill-fated garment factory, as she shuttled between The New School and NYU to teach theater classes. That’s how the story — which she’d first learned in high school — came alive to her.

“It’s an essential New York story,” said Rubino, who co-wrote the piece and will direct it.

“It happened in New York, and New York said, “‘No more’ — that human life is more important than anything that anybody could ever make.”

Triangle, she said, is an inflection point in human history — a convergence of the events and people that make New York unique, and an event that laid the foundation for the progressive legislation of the New Deal. Moments like these merit reflection, she said, especially in light of the recurrence of similar tragedies such as last December’s factory fire in Bangladesh, which killed at least 29 garment workers.

To a theater director, the ultimate form of reflection is to dramatize. “From the Fire” will show audiences a world that combines art forms. Technically, an oratorio is an unstaged opera, although this piece includes choreography and dialogue. An oratorio, by its nature, includes storytelling modes that connect to different kinds of people, spanning the range of human cultural expression: verbally, with story; aurally, with poems and music; graphically, with set; physically, with dance.

In the piece, various media aim to show how human life is more important than anything that is machine made. Its vision will envelop its performance space, Judson Memorial Church, from floor to ceiling.

These seeds fermented in Rubino’s mind six years ago: After she worked on a piece with Swados — an award-winning composer famous for her work on the Broadway hit “Runaways” — she felt she had met the right woman to honor Triangle in song. When she mentioned the prospect to Swados that summer, she seemed enthusiastic, but after finding it infeasible, both women moved on.

For her part, Swados, a diminutive redhead powerhouse, had not heard the Triangle story until Rubino mentioned it. “It was very indicative of women who are not protected in companies today, and I was very moved by it,” she told the Forward in an interview at her Mercer Street loft. “I also felt a tremendous identification ethnically,” she said. Swados is Jewish, and has worked on dramatizing the story of Esther and the Haggadah.

“Memorializing is a Jewish composer’s job,” Swados said. “I feel in charge of memory on some level.”

Still, the pull that Swados felt toward the story was not realized until Rubino staged a last-minute performance for the fire’s 99th anniversary. She used material from the public record, including a speech by famed union organizer Rosie Schneiderman, and asked Swados to set three pieces to music. By that point, Rubino knew she would expand the work for the centennial: “It’s important to keep examining these moments,” she said.

Meanwhile, Rubino pulled in architectural talent in set designer Bonnie Roche-Bronfman after a mutual friend brought her to visit Rubino’s religion and theater course. Rubino mentioned that she’d been thinking about Triangle, and Roche-Bronfman told her: “You have to do it. New York City needs to know this story.”

They began conceiving what would become the oratorio for the centenary. “Cecilia ignited me to say that New York needs to be both remorseful and proud of its response,” Roche-Bronfman said. The production secured some funding from The New School’s Eugene Lang College, and Roche-Bronfman and her husband, business magnate Charles Bronfman, hosted a fall fundraising event.

Another link in chain clicked when Rubino approached her friend Paula Finn, associate director of the City University of New York’s Center for Labor, Community & Policy Studies, to write poetry for the piece. Finn’s connection to Triangle began in 1985, when, at age 24, she worked in communications for the Amalgamated Clothing and Textile Workers Union. “I had been thinking for a very long time about the power of the fire, in terms of its political importance but also in terms of the artistic work,” she said.

As Rubino worked on a script that followed the stories of four victims’ families, Finn wrote her poems over the summer and fall, giving Swados material to set to music.

“I wanted to share an evocation of the fullness of their lives,” Rubino said. “They’re not angels. You see them getting ready for work, part of their life outside of work, including the dance hall and how ordinary they are, and that heroism in the everydayness of their work.”

Slowly, an oratorio was born. Rubino made the story nonlinear: It dramatizes historical events, such as the Uprising of the 20,000 — the first major women’s strike that took place in the New York garment industry in 1909 — and references modern-day tragedies, such as the Bangladesh fire.

For the score, Swados leaned on her background in world music. For the Jewish moments, she gathered inspiration from piyyutim, ancient liturgical poems. “Jewish music, it’s a certain passion, a certain lack of censorship of the soul,” she said. “The soul goes right to the music, and the music doesn’t talk about itself. The music is. It explodes even in the slow and quiet.”

The production matches structure with content. The music is “noisy,” Swados said, as it mimics the sounds of machines. And the set itself, which hinges on a single prop — a table — is meant to portray the tension between the order of the sewing machines and the chaos of the lives that operated them.

The space itself, the Judson Memorial Church, will become a means of storytelling, as a projector will paint the walls, from floor to ceiling, with images. “You see the needle of the sewing machine puncturing the piece of product. That in itself is a violent act,” Roche-Bronfman said. “We’re projecting shots of that detail and transforming the meaning of what it is to sew.”

The different components of the oratorio create a shared language, with story and music playing against the space — and its creators hope the combination is evocative for audience members.

“I want them to feel the humanity of the women who were involved and to experience the injustice of that kind of loss of life, and to understand that you really shouldn’t turn your head away from these kinds of slave labors of any nationality that are going on,” Swados said. “I hope they get some history, some beauty, some sadness. I hope they wake up. Aren’t we in a kind of communal slumber, all of us, of what’s going on?”