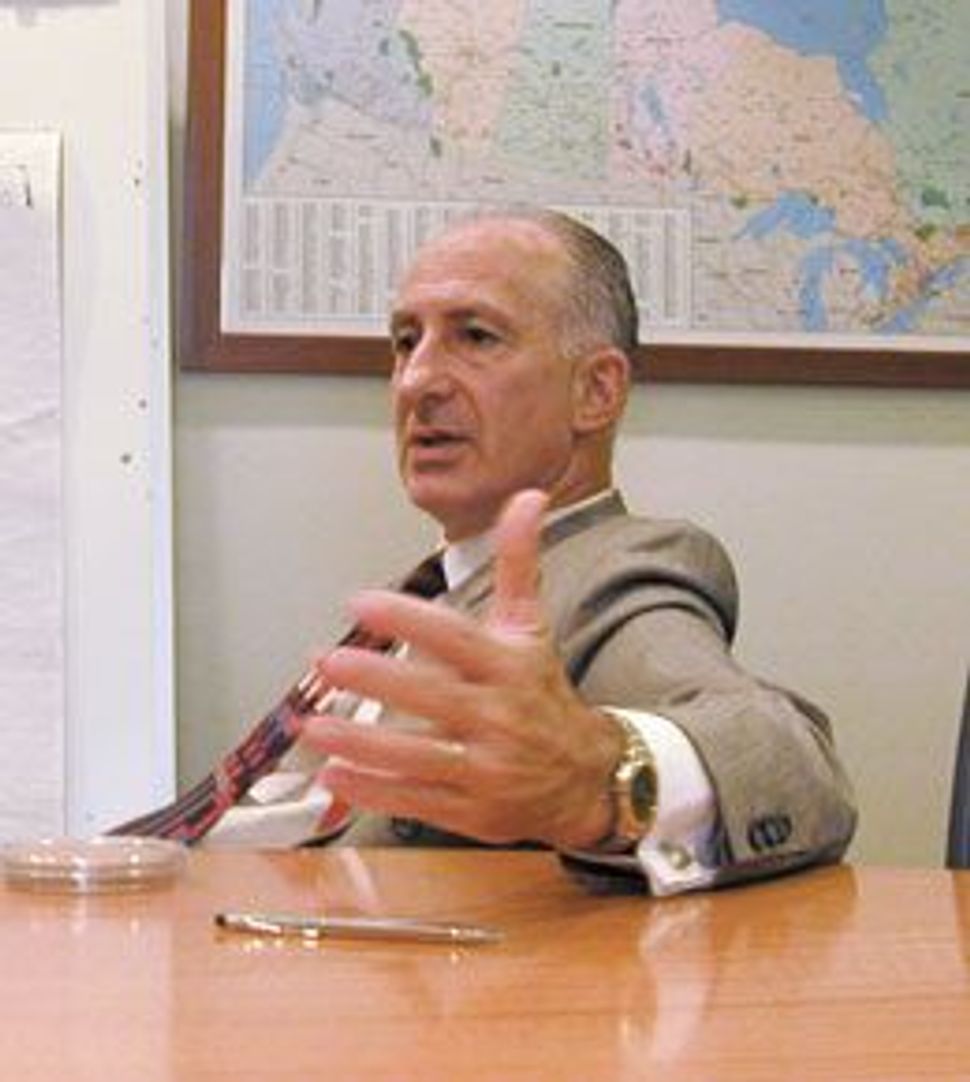 By the time the union was done with J.P. Stevens and Co., the boycott of the giant textile manufacturer had so penetrated the culture that the wives of Stevens executives, heading off to cocktail parties, would warn their husbands not to tell anyone where they worked.

It’s an anecdote that Bruce Raynor, the latest — and maybe the last — of the garment union bosses, has never forgotten. Raynor was then a young organizer helping to manage the campaign to unionize Stevens. He and his colleagues at the Amalgamated Clothing and Textile Workers Union shamed the corporate giant into submission, organizing thousands of workers in the process. 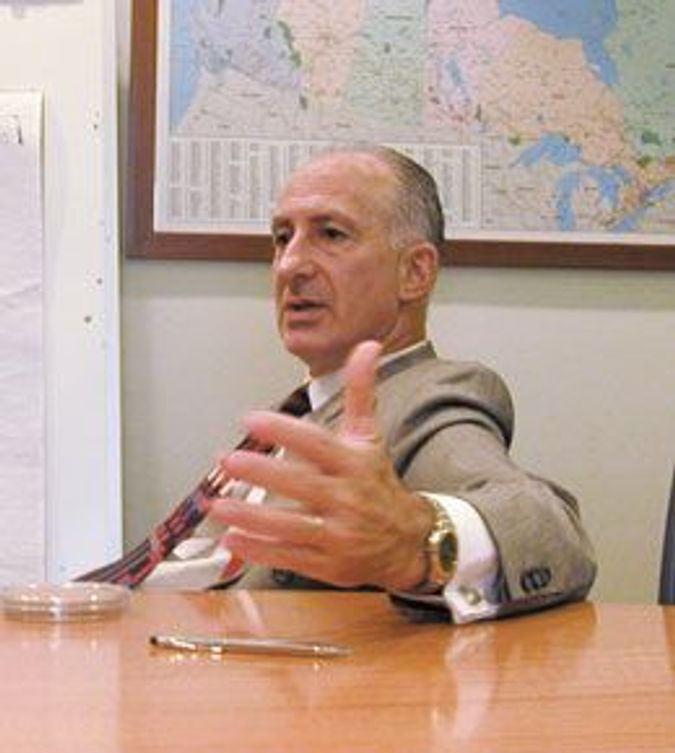 Sitting on a couch in his Manhattan office 30 years later, and wearing a pinstripe suit made in a union shop, Raynor speaks of the J.P. Stevens victory as a crowning moment in the history of the garment and textile unions.

But of all the powerful players and forces that clashed in that fight, Raynor is the only one left standing. Two mergers and one divorce later, what’s left of the ACTWU is a small affiliate of the huge service employees union. J.P. Stevens was bought out and split up a few years after the successful union drive. And the American garment and textile industry, which employed 2.3 million people as recently as 1976, has all but disappeared.

The 100th anniversary of the Triangle Shirtwaist Factory Fire, to be commemorated later in March, also marks a milestone in the history of the tangle of unions that have represented the interests of garment and textile workers in America. The garment union movement, long identified with the legacy of the Triangle fire, is quickly fading, as manufacturers have fled the country and the industry has shrunk.

“It’s a very sad history, because this is a very proud union movement that not only did a lot for its members, but also did a lot for the country,” said Richard Greenwald, dean of the Caspersen School of Graduate Studies at Drew University. Greenwald is writing a book on the history of the garment unions. Today, he said, when it comes to the garment unions, “There’s almost not a there there.”

The outfit that Raynor now leads, an affiliate of the Service Employees International Union called Workers United, has its earliest roots in the International Ladies’ Garment Workers’ Union, which burst into the national consciousness in 1909 when 20,000 shirtwaist makers went on strike in New York City. The strikers were mostly women, and their militancy shocked both the general public and the union movement.

“Women were not expected to be good unionists,” Greenwald said.

The 1909 strike, which came to be known as the Uprising of the 20,000, changed this. Local 25 of the ILGWU had only 400 devoted members in 1909. Union membership grew to 25,000 by the strike’s end, 14 weeks later. Another strike the next year followed that one, and by 1911 the ILGWU claimed about 100,000 members. Most of the larger factories had settled with the growing union, and conditions for workers seemed to be improving.

But the owners of the Triangle Waist Company, the largest blouse factory in the city at the time, led the opposition to the 1909 strike, hiring thugs and prostitutes to harass the workers as they picketed.

Triangle was among the few nonunion holdouts when the factory went up in flames March 25 of 1911, killing 146 workers.

“Everyone noticed that the Triangle factory, the one nonunionized shop, was the place of the fire,” Greenwald said. The company’s refusal to work with the unions was especially poignant, because a decent fire escape, and factory doors that opened outward, had been among the strikers’ demands.

The tragedy brought attention to firetrap working conditions, and it led to huge changes. Fire, health, and labor codes were strengthened in New York, and the influence of the ILGWU grew.

The men’s garment industry operated differently from the women’s garment industry, with more static styles allowing the building of bigger factories, and so different unions organized each industry’s workers. The United Garment Workers of America was founded in 1891 to serve men’s garment shops, but radical Jewish immigrants within the union found it too moderate, and in 1914 a dissident UGW local peeled off to form the Amalgamated Clothing Workers of America. By the 1920s, the Amalgamated, led by a Lithuanian-born Jew named Sidney Hillman, was growing steadily in New York City, Rochester, Chicago, and Baltimore.

Even though they worked in different industries, the ILGWU and the Amalgamated shared a common culture. Jewish immigrants heavily populated both, and both were influenced by left-wing politics. The unions were staunchly socialist, though the ILGWU eventually adopted more stringent anti-communist positions than the Amalgamated. But both saw themselves as doing more than just organizing workplaces; the two unions built health clinics, housing and a union-owned bank.

“The view of the union was much broader than just taking care of the shop,” Raynor said.

As the garment unions grew in strength in the North, the manufacturers did their best to scatter. The women’s industry was more thoroughly anchored in New York, as the smaller shops lacked the resources to move, and the essential designers and button makers were based in the city. But the men’s industry quickly made its way to less densely unionized towns and cities of the South.

The unions took aim at the South in the decades after World War II. Textile mills were a particular target, and Hillman was instrumental in the formation of the Textile Workers Union of America, which initially shared its headquarters with the Amalgamated.

But the atmosphere of the postwar South meant that union drives were about more than just labor issues. Racial and ethnic divides between workers and owners often exacerbated tensions. When Raynor went to the South as an organizer in 1977, these fights were still continuing.

“We were fighting for civil rights as well as the labor movement,” Raynor said.

It was this sense of a broader struggle that attracted former college activists like Raynor to the union. “We would hire college graduates who had a social mission,” Raynor said. “We were about embracing people who joined the trade union movement out of social conviction, not just out of self-interest.”

These young union activists were central to creating the innovative new organizing tactics that came to define the garment and textile unions. The corporate campaign, in which unions launched broad attacks on organizing targets that went far beyond the workplace — launching boycotts and lobbying employers of corporate board members, among other tactics — were first employed by the Amalgamated and the TWUA. The two unions merged in 1976 to form the ACTWU, in part so that the textile union could have access to the financial resources of the Amalgamated to run its corporate campaign against J.P. Stevens.

Meanwhile, the ILGWU, led by David Dubinsky from 1932 to 1966, was on its own. True to its history, the union developed a reputation for sharp elbows. “The ILG had a tremendous willingness to strike and fight employers. It was a nasty industry — nastier than the men’s industry, which really was more gentlemanly,” Raynor said.

But by the late 1970s, both the women’s and men’s garment industries had begun to shrink. American-based manufacturers couldn’t compete with the dirt-cheap labor available in underdeveloped countries overseas, and tariffs couldn’t keep pace.

And yet, Raynor said, even as the jobs evaporated the unions felt they were making progress. “We organized thousands of workers. We were winning,” he said. “The industry was declining, but we were winning, we were organizing.”

The shrinking work force caused the ILGWU and the ACTWU to merge in 1995 to form the Union of Needletrades, Industrial and Textile Employees, or UNITE. Raynor was made executive vice president of that union upon its founding, and became president in 2001.

The garment industry finally left the country en masse in the 1990s, and the textile firms followed. “It was beyond the capacity of a single union” to reverse the industry’s decline, said Nelson Lichtenstein, the director of the Center for the Study of Work, Labor, and Democracy at the University of California, Santa Barbara.. “But I think, had labor been stronger in general… you could have at the very least made the shift of production less painful and less socially disruptive.”

In 2004, UNITE engaged in a brief, ill-fated merger with HERE, a hotel and restaurant workers union. Raynor headed the new union, called UNITE HERE. “The idea of a merger was a good idea: to use the Jewish garment money to organize Latino hotel workers,” Lichtenstein said. But it didn’t last long.

Raynor blamed a clash of cultures for the dissolution of the union in 2009, which was notable for the depth of ill-feeling it created among the players. Nearly all the remaining garment and textile locals followed Raynor, who formed Workers United, an affiliate of SEIU. (Raynor also holds a separate role within the SEIU leadership.) Workers United claimed 128,000 members in a recent public filing. SEIU, meanwhile, represents a total of 1.8 million workers, making Workers United a tiny fish in the mother union’s big pond.

Raynor insists that Workers United will survive as an independent entity. It still controls Amalgamated Bank and other related operations owned by the union. But others are unsure.

“This is the end of the line,” Lichtenstein said. “It’s sort of, nostalgically, too bad.”