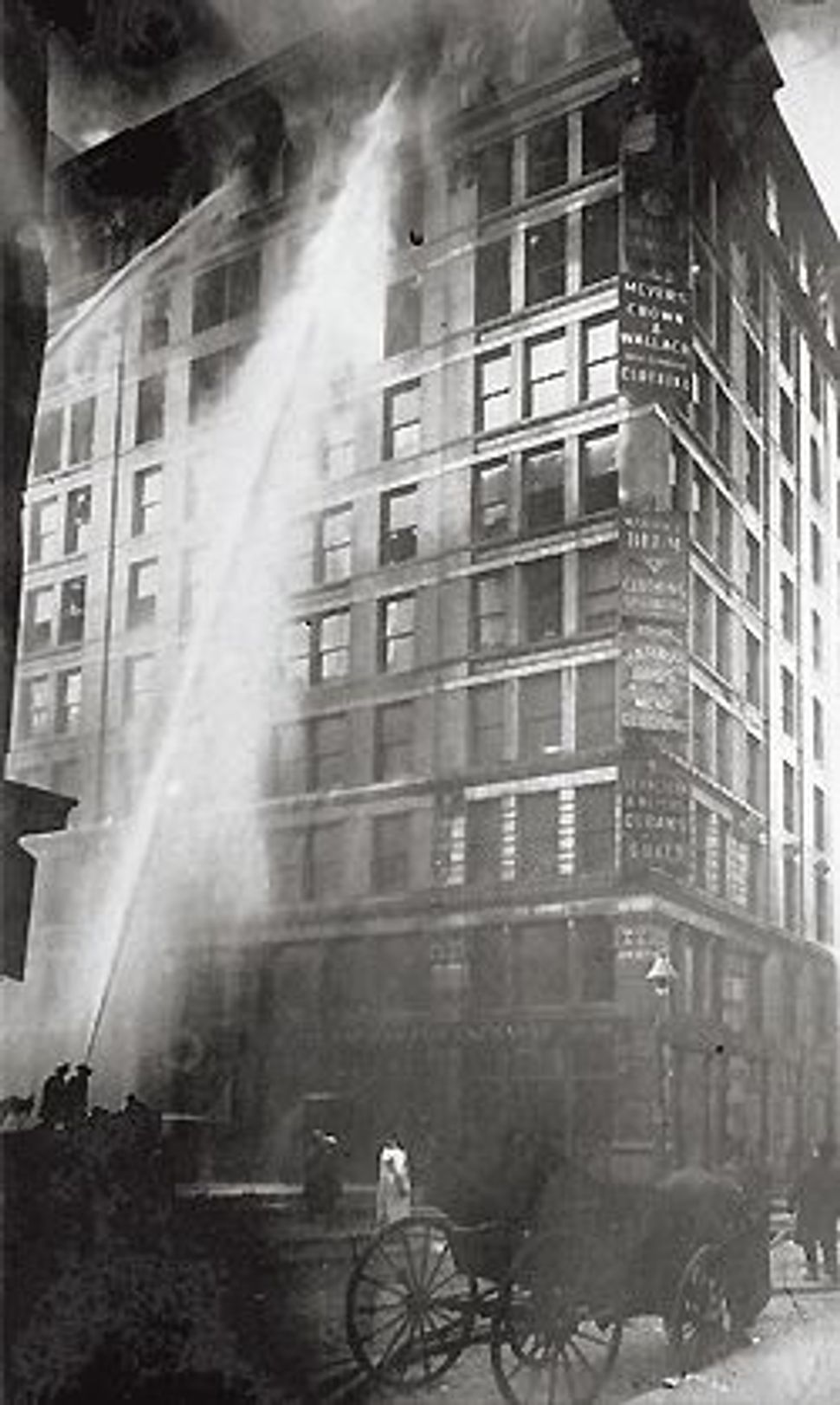 Too Late: The fire was extinguished in about half an hour, but 146 workers were already dead. Image by ilgwu archives, kheel center, cornell 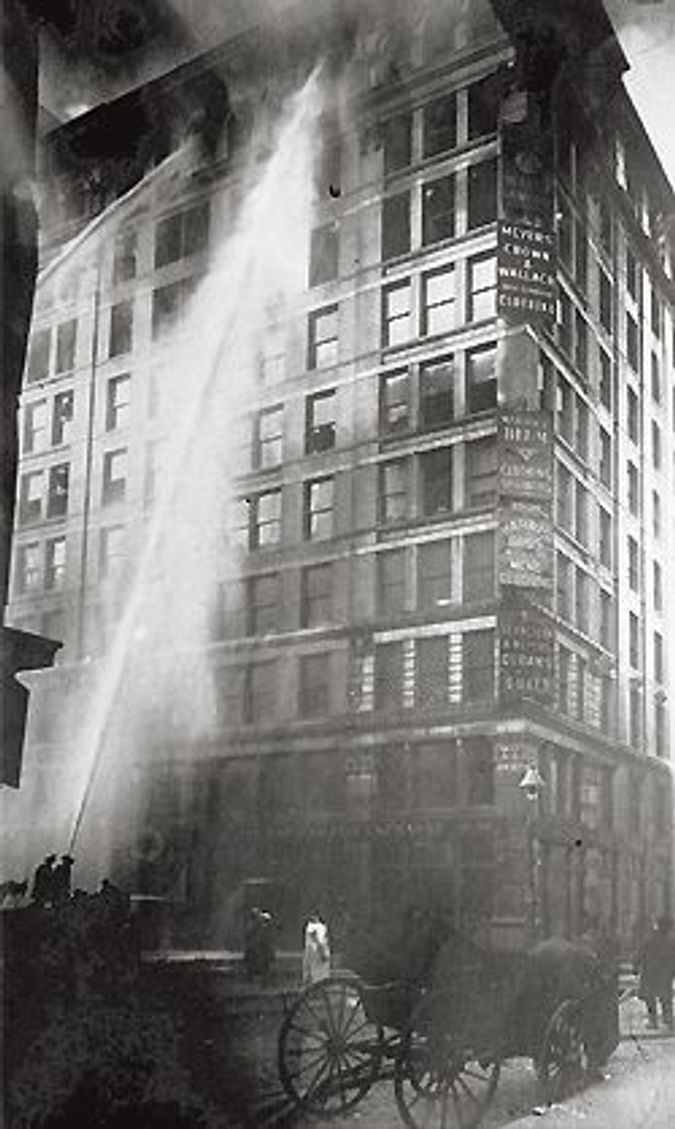 Too Late: The fire was extinguished in about half an hour, but 146 workers were already dead. Image by ilgwu archives, kheel center, cornell

“Sometimes it takes a tragedy like Triangle to energize the community,” said Appelbaum, national president of the Jewish Labor Committee and head of the Retail, Wholesale and Department Store Union. “I think labor is coming together around Wisconsin in the same way.”

Appelbaum, one of a handful of plucky union chiefs still pushing organizing drives around the country, had better be right. There’s not much room left for error.

Even before the Battle of Madison erupted in February, unions already had their backs to the wall. A few days before Governor Scott Walker’s call for the elimination of collective bargaining rights for public employees, federal officials released their annual figures on union membership.

For labor, it wasn’t a pretty picture: Overall, membership slipped in 2010 amid the recession to 11.9% of the workforce, down from 12.3% a year earlier. That’s just the latest notch on a steady slide since labor’s high point of 35% back in 1954. Drastic as that fall has been, an even louder warning siren should have sounded in union halls early last year. That’s when the 2009 figures showed that, for the first time, public sector workers covered by union contracts outnumbered private sector workers.

The Wall Street Journal sure didn’t miss the point. “This means government is the main playing field of modern unionism,” causing “higher taxes and government expansion,” an editorial warned. “The agenda for American political reform,” the Journal instructed, “needs to include the breaking of public unionism’s power to capture an ever-larger share of private income.”

That’s exactly where labor unions find themselves today: on defense, battling a rear-guard assault to preserve what they have left. “We are in survival mode,” said Denis Hughes, president of New York State’s AFL-CIO. “Most of what I do is to stop bad things from happening. My job is to push back.”

Based on the numbers, Hughes should be having a relatively easy time of it. New York still clocks in with the nation’s highest union membership rate — 24.2%. Alaska is next with 22.9%.

But the “unions-are-to-blame” fervor is ablaze in Albany as well. “Democratic leaders are saying things about labor we would’ve thought unthinkable a few years ago,” said Hughes. Who might those leaders be? Hughes delicately avoided names, but allowed that he meant “statewide leaders.” That would be New York’s Governor Andrew Cuomo, who has called for a combination of wage freezes and layoffs, plus a reshuffling of seniority as it applies to teachers. (By default, Cuomo gets some muffled labor applause here, since his proposals are considered less draconian than Mayor Michael Bloomberg’s demand to scrap all “last-in-first-out” rules.)

Hughes, an easy-going former electrician, started a slow boil when asked how it happened that labor had lost the moral high ground it had long held and found itself labeled a problem instead of a solution.

“There are so many things unions have done that never get the credit they deserve,” he said. Counting off on his fingers, he cited the minimum wage, maximum working hours, and health and safety regulation. In more recent history, there was the December vote by Congress approving legislation to cover health care costs for rescue workers injured after 9/11. “I don’t know how much we spent lobbying for that, or how many trips to Washington we made,” Hughes said. “It was a tremendous win, but it wasn’t reported as ‘a labor victory.’”

The media ranks high on the culprit list when labor officials are asked how their movement went off track. “It’s very hard to get a favorable story about unions in the papers,” Hughes said.

Peter Ward, the scrappy head of New York’s Hotel and Motel Trades Council who has fought successfully to keep a union label on the city’s hotels, agrees. “Large moneyed interests control the media,” Ward said. “They have the largest megaphone, and organized labor has no way to combat that.” As evidence of this unlevel playing field, Ward cited the failure to keep the spotlight on those who sparked the financial collapse. “We had the largest financial crime in history culminate in 2008,” Ward said. “We had major mortgage brokers falsifying documents, huge investment firms participating in what can only be described as Ponzi schemes. The entire world knows it. But somehow unions are taking the hit for the resulting fiscal crisis.”

Still, some headaches have been of labor’s own making. Amid the Wisconsin debate, New York City’s big union story was the resignation of the leader of the city’s Central Labor Council, following a scandal involving his questionable pay hikes and perks. CLC president Jack Ahern resigned in March after pressure from Ward and other union leaders dissatisfied with his leadership forced him out.

Then there are labor’s own nasty internal wars. It’s a good thing the Triangle centennial didn’t come two years earlier. That would’ve been embarrassing, since UNITE HERE, the descendant of the once-mighty union that emerged from the fire’s ashes, was in the midst of an ugly civil war, complete with picket lines, lawsuits, and angry jousting over shops and members. As a result, turnout for the annual Triangle fire memorial service in 2009 was slim. The garment and hotel and restaurant workers’ unions ultimately divorced, but sentiments remain raw.

There’s also the failure of labor to deliver on its own promises. Back in 2005, some of the nation’s biggest unions bolted the AFL-CIO, saying they were frustrated with its failure to push for more organizing. The chief architect of that strategy was Andrew Stern, former leader of the 2.2 million-member Service Employees International Union. Stern got the kind of coverage labor dreams about — his face on the cover of The New York Times Sunday Magazine, where he was hailed as unions’ new hope. But Stern resigned his post last year amid charges that he cut deals with employers without clueing in his rank and file. Even its leaders admit that the hopeful new umbrella organization Stern helped found, Change to Win, never lived up to its organizing pledge.

Amid this grim news, Retail employees’ leader Appelbaum said he remains optimistic. Over the past decade, Appelbaum’s organizers have brought unionization to low-paid workers at huge poultry plants in the South and at chic retail stores in New York’s Soho neighborhood. “Unions still help bring people decent lives,” said Appelbaum. “In the right-to-work states, we are part of the civil rights movement. Labor’s not large enough to exert the power we once had,” he added, “but, together with like-minded community groups and churches, we can bring fairness to the workplace the same way people did after the Triangle tragedy.”

Tom Robbins, a former columnist for the Village Voice, will join the City University of New York Graduate School of Journalism as an Investigative Journalist in Residence.