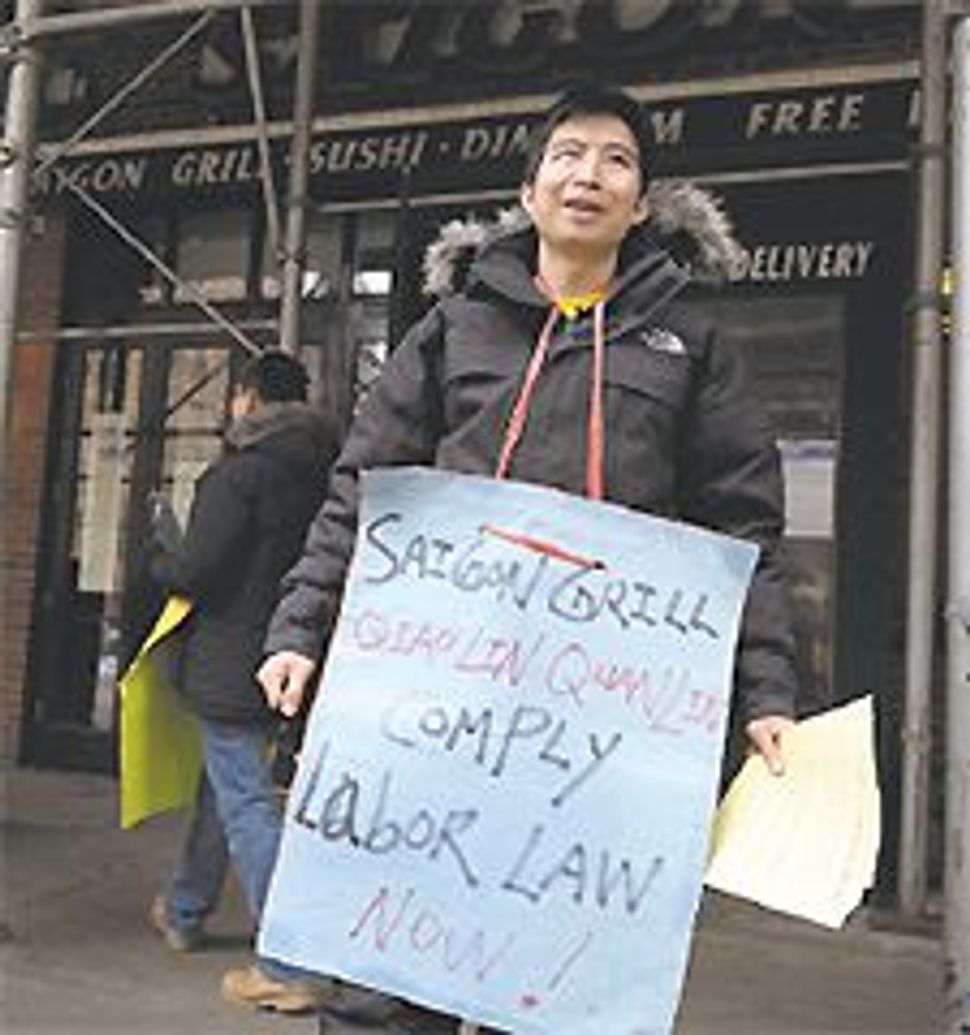 Struggle: Pickets at a Vietnamese restaurant in Manhattan. Image by RICHARD CAPLAN 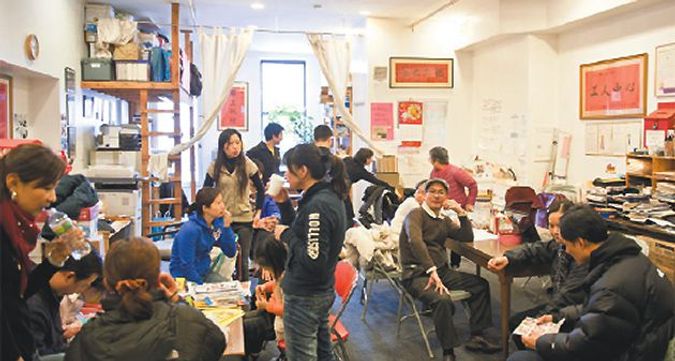 Solidarity: The Chinese Staff and Workers Association in Manhattan is a hub for striking workers. ?You feel it?s home,? says one. Image by RICHARD CAPLAN

On a recent late-winter afternoon, the workers’ center on the second floor of a nondescript office building in New York City’s Chinatown was full and busy. Everyone had just eaten lunch; warm soup was welcome after picketing in the cold outside an offending restaurant, Saigon Grill on Manhattan’s Upper West Side. In the rear of the small office suite, with worn blue industrial carpet underfoot and inspirational posters bearing Mandarin Chinese writing on the walls, a circle of Saigon Grill’s delivery men discussed how to deal with what they called their employer’s latest affronts. A few feet away, at a computer, a young lawyer talked with her client — a worker at a restaurant in Queens until the owner abruptly shut it down — and typed up a legal document. Nearby stood a man talking to others about his effort to confront extortion and violence in the limousine business.

This workers’ center of the Chinese Staff and Workers Association — like its counterpart in Brooklyn, or the Workers Defense Project in Austin, or the Coalition of Immokalee Workers in Florida, or the Pilipino Workers Center in Los Angeles, or hundreds of other centers across the country — is a clubhouse for struggle. It’s a supportive home-away-from-home for immigrants working the jobs at the bottom of America’s economy and fighting for better conditions. Often, their battle is simply for employers to follow state and federal laws that require payment of minimum wage, payment of tips and overtime, defined and finite hours, a physically safe environment and the ability to redress grievances without retaliation or termination. Niceties like paid sick days, paid vacation days and health insurance would be welcome, too. 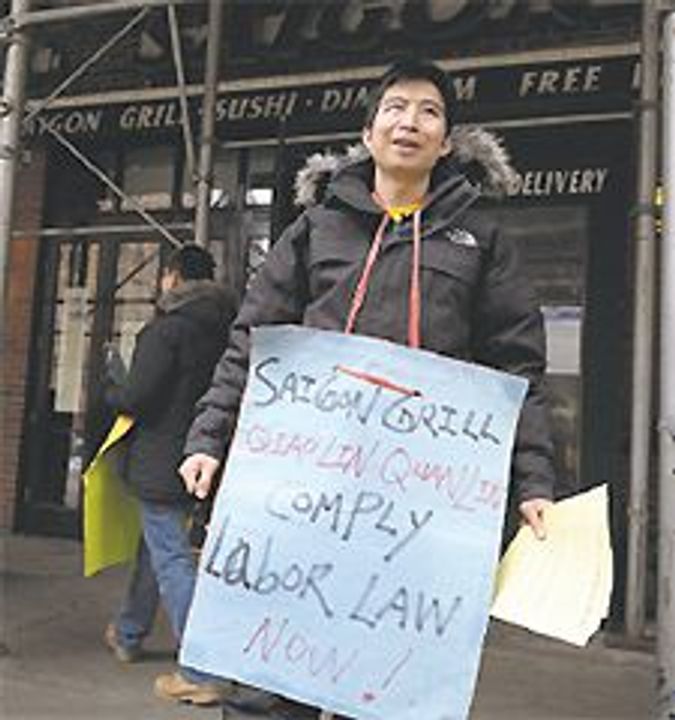 Struggle: Pickets at a Vietnamese restaurant in Manhattan. Image by RICHARD CAPLAN

“You feel it’s home. You go there and people care about you. People care about each other, just like friends,” said Jerry Weng, 30, who emigrated from China 14 years ago and now lives in the Chinese enclave of Sunset Park, Brooklyn. He is a regular at both the Chinatown workers’ center and the Saigon Grill picket line, claiming he was unfairly fired from the restaurant. “If you don’t stand up for your rights, conditions never change,” Weng said. “I get inspired by a lot of workers coming out to fight for their rights.”

At a time when union membership is only one-quarter the size of its mid-20th-century high, when the flow of cheap immigrant labor is constant and the flouting of labor laws is routine, workers’ centers have sprouted up across the country as a way for the nation’s laborers to find comradeship, learn from each other and agitate for change — much as immigrant garment workers did in New York City in the months before and after the Triangle Shirtwaist Factory Fire. And just as a string of landmark laws were enacted in the wake of that fire — requiring fire extinguishers, washrooms and workers’ compensation, among many other things — workers today are winning victories both in the statehouse and the courthouse.

Last year in New York, with a major push by activists — including a workers’ center called Make the Road New York in Brooklyn — then-Governor David Paterson signed the Wage Theft Prevention Act into law, increasing penalties on employers who don’t give workers their due compensation. And with key backing from the Manhattan group Domestic Workers United, he also signed the Domestic Workers Bill of Rights, guaranteeing the state’s nannies and caregivers sick days, overtime, a day of rest, protection under discrimination laws and notice before termination.

And this is not just happening in New York: With support from the group South Florida Interfaith Worker Justice, the Miami-Dade County Board of Commissioners last year passed the country’s first countywide ordinance to combat wage theft. In Texas, where the year 2009 saw 138 construction workers killed on the job — nearly the number of workers killed in the Triangle fire — the Workers Defense Project in Austin has spurred the Austin City Council to pass an ordinance requiring rest breaks on construction sites. In addition, the federal Department of Labor opened an investigation of sites across the state, resulting in workers’ wearing helmets and harnesses where none had been seen before. And when San Francisco became the first city in the country to require all employers to provide workers with paid sick days, it was the group Young Workers United that helped organize the support needed to get it done.

All this represents progress in the battle for the rights of the most vulnerable workers, but some observers see a return of the same poor conditions that led to the Triangle fire, and a new way of approaching the fight.

“In terms of the [Triangle] fire and the commemoration — in terms of where we sit right now — it’s sort of this bittersweet moment,” said Annette Bernhardt, policy co-director at the National Employment Law Project. “I think that we’re seeing a resurgence of the type of sweatshop conditions that prompted so much policy change. And I think we’re seeing a new face of organizing on the ground to take on those working conditions.”

“Breaking the law has become pretty routine for a lot of low-wage employers,” said Bernhardt, who has authored reports on the prevalence of labor law violations. (For example, a 2008 survey of low-wage workers in New York revealed that 37% of the tipped workers in the sample were paid less than the minimum wage; of workers who experienced a serious injury on the job, 47% reported they were required to work despite the injury.) “But at the same time,” she said, “a lot of the organizing we’re seeing has offset that in my mind, and really makes me feel better about the prospects for change.

A combination of 21st-century factors makes the moment ripe for the spread of workers’ centers, said Fordham Law School professor Jennifer Gordon. She founded one of the first such centers, the Workplace Project on Long Island, in 1992.

“It’s a combination of immigration policy that dissuades immigrants from standing up for their rights and both government enforcement and union strategies that aren’t a good fit for the realities of these workers,” Gordon said.

That’s why the number of centers across the country, in areas from rural to urban, has grown from a handful in the 1980s and ’90s to anywhere from 500 to 1,000 today, depending on how they’re defined, said Dianne Enriquez, national workers’ center network coordinator for the Chicago-based group Interfaith Worker Justice (IWJ). A workers’ center may start from scratch, or develop out of a legal clinic or community group. Some charge their members a nominal fee. They reflect the demographics of their place, which can mean representing a diverse pool of workers, or mostly undocumented immigrants, or mostly African-Americans, and so on. They’re usually nonprofit organizations, operating on lots of volunteer hours and in-kind donations, plus funding from foundations, individual donors and churches. For example the Workers Defense Project in Austin, whose annual budget has grown to about $500,000, plans to open a second office in Dallas. Centers may even have funding from unions, which have a complicated relationship with the centers, but the two types of organizations are collaborating more these days.

As state and federal budgets continue to shrink, government labor officials are looking to collaborate, too. “We often partner with workers’ centers, community-based organizations and other outside groups in an effort to bring forth compliance and promote education of the labor laws,” New York State Department of Labor spokesman Joseph Morrissey wrote in an e-mail. “These centers are often the first point of contact for workers who may be unfamiliar to the Department of Labor and its services. They are very helpful in bringing workers to us.”

As the American economy has moved away from manufacturing, which was heavily unionized, and more toward services, workers’ centers have moved more nimbly to advocate for nonunion, often immigrant, workers who labor at landscaping and housekeeping and staffing laundries, nail salons, car washes, restaurants and stores.

“Workers’ centers are basically responding to the new economy we have,” said Enriquez from IWJ. “It’s a branch of the labor movement, but just a different model.”