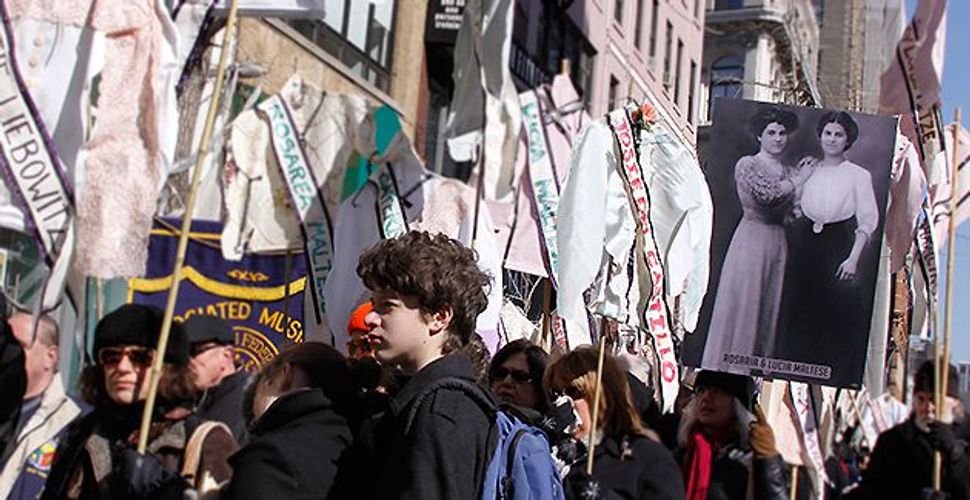 Remember: Relatives of Triangle Fire victims march through Lower Manhattan to commemorate blaze?s 100th anniversary while holding up shirtwaists with names of those who died. Image by SHULAMIT SEIDLER-FELLER

It was a family reunion of sorts — just 100 years after the fact.

As soon as the march and speeches were over, and the names of all 146 victims of the Triangle Shirtwaist Factory Fire had been read aloud, family members of those who died and those who survived the March 25, 1911, blaze headed to a restaurant to break bread together, courtesy of the Triangle Families Association.

The talk was lively, and connections were more important than the menu at the two-story Vapiano restaurant in Manhattan’s Union Square. Take, for example, the table of the Del Castillos and Lupinaccis. Judging from the comfort of their banter as they munched on pasta and personal pizza pies, they could have been related. They nearly were.

Earlier on March 25, descendants of Triangle victims marched down the streets of Lower Manhattan, carrying handmade shirtwaists (blouses) with sashes bearing the names of the dead. Mary Alice Del Castillo of Baldwin, N.Y., in Long Island’s Nassau County, bore a shirtwaist with the name of her aunt, Josie Del Castillo.

Another Long Islander, MaryAnn Lupinacci, approached her. “Are you related to Josie?” she asked.

Lupinacci told Del Castillo she was the niece of Josie’s best friend, Santina Salemi, who also died in the fire. In fact, their names were on the same tombstone. The families had a lot of catching up to do.

As it turns out, Lupinacci’s cousin Loo Miano, of the Astoria section of Queens, had been trying to find out more about the mysterious Josie for years. His mother was named after Salemi, so he felt a close tie to the fire.

“I did some genealogical research and tried to figure out this name on the grave,” he said. Both came from Cerda, a village in Sicily. After moving to America, Santina and Josie lived on Cherry Street together with Santina’s cousin Rosie Cirrito, who also perished in the fire. Salemi’s sister, Frances Salemi, survived. As the fire raged, she prayed to God for her safety — and promised that if she survived, she would devote her life to God’s work. She later became a nun.

“I was really thrilled,” Del Castillo said. “We didn’t know that much about Josie.” She first learned about her connection to the fire 45 years ago, when her husband’s great-aunt mentioned it. “We will definitely stay in touch.”

Miano said he was excited to have closed a gap in his family research. “It’s always been just this name on a tombstone,” he said. “Now we’ve got a face and descendants.”

The web gets even broader: the only reason Lupinacci saw that shirtwaist was that after meeting the Lupinacci clan and hearing their story, artist Elizabeth Wilson noticed the name “Josie” and pointed it out. “I just happened to see it during the commemoration,” she said.

Wilson has been researching her family’s Triangle story since she learned that an ancestor, Joseph Wilson, died at age 22 in the fire. As the flames rose, he escaped from the Triangle Waist Company factory in Greenwich Village, but returned to retrieve his pocket watch, a special memento his father had given him. His fiancée, Rosie Solomon, was taken to a temporary morgue to identify the corpse. She recognized his remains in Box 34, only because of the pocket watch. When she opened the watch, she found her picture inside. A century later, Wilson connected with Solomon’s descendant.

Many of those invited to the luncheon had first been in touch with historian Michael Hirsch, who co-produced an HBO documentary about the fire, based largely on his research that identified the final six unidentified fire victims. So he invited 200 families of descendants of Triangle victims and key players in the world of 1911 unions to lunch following the 100th-anniversary commemoration.

Wilson was among the family members who were grateful for Hirsch’s painstaking research. “I’ve been trying to find all this information, and with Michael’s work, all the pieces are coming together,” she said.

At the restaurant, she sat at a table with Alan Lacki, an engineer from Pennsylvania whose grandfather’s second wife’s sister, Concetta Prestifilippo, was one of the six victims Hirsch identified. “It’s a big family, a thread that ties us all together in a tapestry,” Wilson said. She then took a list of victims out of her purse, and pointed out many names whose descendants she had met over the past three years and at the lunch. “This is how we carry on their family and their missions,” she said.

Jane Margules of the Upper West Side grew up steeped in the history of the labor movement. Her grandmother was Clara Lemlich, who, as a young woman from Ukraine, was a labor activist who was beaten on the picket line and inspired the 1909 Uprising of the 20,000, a massive strike conducted by women workers that hit more than 500 New York City garment factories.

“You don’t realize these connections, because people don’t talk about the fire. It’s traumatic,” Margules said. “Piecing this all together, it’s a little like Jewish geography.”

The centennial celebration began with a march, starting at Union Square and ending at the site of the former Triangle garment factory, near Washington Square. There, from a stage erected on the border of Washington Square Park, U.S. Labor Secretary Hilda Solis reminded the crowd of thousands in front of her that the fast-moving blaze in the overcrowded garment factory claimed the lives of 146 workers. Those are “146 reminders that we can and should do better,” she said.

“We are reminded that we must always protect our most vulnerable workers,” she said, adding that the U.S. Labor Department was “back in the enforcement business.” Her remarks brought loud cheers and applause from the people in the crowd, many of whom carried union banners.

Solis said that her parents had belonged to unions, then hailed the legacy of organized labor. “Unions have helped all workers in America have the opportunity to join the middle class,” she said. “Let us pledge to never give up our fight for justice.”

Packing Washington Place for the centennial ceremony were men in hardhats, school children, teachers, unionists and the ceremonial unit of the New York City Fire Department.

Bruce Raynor, president of Workers United, an affiliate of the Service Employees International Union that represents garment and textile workers, pointed to the former Asch Building, now New York University’s Brown Building, and told the crowd members that they were looking at the exact spot where tragedy occurred.

“Those were the windows out of which young women, garment workers… were forced to jump… and were crushed to death on the sidewalk,” Raynor said.

The workers in the Triangle shop, which remained nonunion following a bitter strike, had fought for such safety features as doors that opened outward, and adequate fire escapes.

“We come together to remind ourselves that those workers were fighting for their rights to have a union in that workplace, and be treated with dignity,” Raynor said.