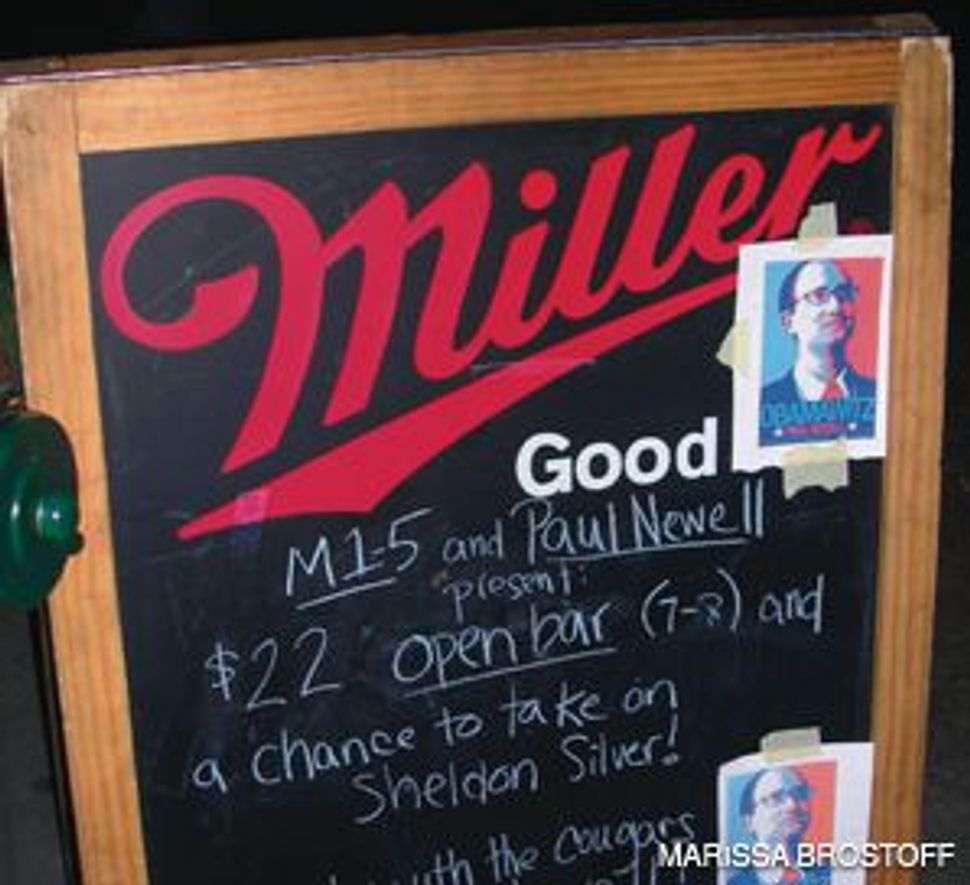 GOT ANY CHANGE?: Political novice (and Yiddish speaker) Paul Newell is hoping to capitalize on desire for change in his longshot bid to unseat New York State Assembly Speaker Sheldon Silver ? going so far as to bill himself as ?Obamawitz,? as reflected in posters at a recent Manhattan bar fundraiser.

This September, residents of Manhattan’s Lower East Side, the cradle of Yiddish culture in America, will be able to choose between not one but two Yiddish-speaking candidates for political office. 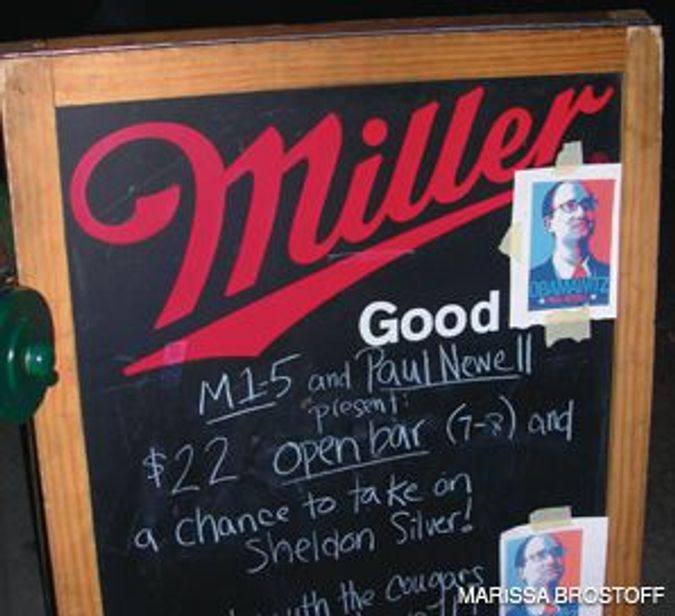 GOT ANY CHANGE?: Political novice (and Yiddish speaker) Paul Newell is hoping to capitalize on desire for change in his longshot bid to unseat New York State Assembly Speaker Sheldon Silver ? going so far as to bill himself as ?Obamawitz,? as reflected in posters at a recent Manhattan bar fundraiser. 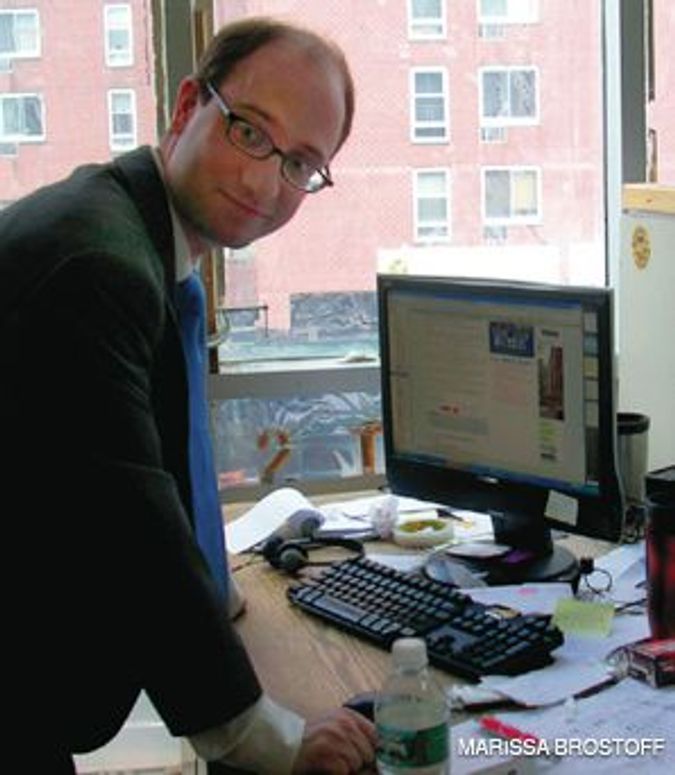 In one corner is one of the three most powerful politicians in New York state. In the other is a 33-year-old former employee of the YIVO Institute for Jewish Research.

The incumbent in the race is Assemblyman Sheldon Silver, who has represented the state’s 64th District for almost as long as his opponent, a political newcomer named Paul Newell, has been alive. Newell and another young contender, Luke Henry, represent the first challenge since 1986 that Silver has faced in the Democratic primary for his seat.

Once an aspiring immigration historian, Newell studied Yiddish after college and, in the late 1990s, worked in the YIVO archives classifying documents that recently had been uncovered in Vilnius (commonly known to Jews as Vilna), Lithuania. He subsequently traveled to Vilna and to Belarus, researching Yiddish dialects.

Newell, who is slight and balding, with glasses and a wonkish manner, does not claim to be a born politician. He is in the race, he says, mainly to beat Silver. Newell says that Silver’s policies on transportation and housing are of particular concern, but his campaign has taken shape around the issue of structural reform in Albany — which he argues is a bastion of corruption, with power disproportionately concentrated in the hands of a few top officials.

“People who are invested in the political power structure in the city of New York are not going to oppose this guy,” he said in a recent interview with the Forward, “so why not me?”

Observers are skeptical about Newell’s chances for victory, not least because Silver has strong roots in the district. According to a spokesman for Silver, his popularity stems from the benefits that have accrued to the district — which also includes Chinatown, the Financial District and Battery Park City — by virtue of it having such a powerful political figure represent its turf.

“Anyone who calls lower Manhattan home feels that Shelly’s gotten results and has been their voice in Albany,” said Jonathan Rosen, a spokesman for Silver’s campaign.

Still, the Newell campaign has attracted a fair share of attention and inspired some juicy speculation — including the rumor that New York City Mayor Michael Bloomberg is supporting it in retaliation for Silver having blocked the mayor’s congestion-pricing proposal. Last month, New York magazine noted that Newell “happened to become Facebook friends with Bloomberg’s political brain, Kevin Sheekey, on the very day congestion pricing died.” Stu Loeser, a spokesman for Bloomberg, would not comment on the subject.

“I believe what makes New York City strong and the Lower East Side in particular strong is this incredible dynamic diversity of cultures and classes,” said Newell, who grew up in Greenwich Village. “If we surrender to the market, to nothing but luxury housing, not only will it be displacing tens of thousands of families, but it will destroy the character of the neighborhood, and that will be a great loss to all of us and to the new people moving in.”

It is not lost on Newell that, as a young candidate projecting an idealistic, reformist image in 2008, he is borrowing heavily from the playbook of Democratic presidential contender Barack Obama. Indeed, Newell is a delegate for the Illinois senator and a poster that his campaign has tacked up around the district suggests that he is hoping to be recognized as an endearingly nerdy Jewish spin-off of the presidential candidate: A near-replica of a popular Obama poster, it features a stylized image of Newell’s face with a large caption at the bottom that says “Obamawitz.”

The poster is one emblem of a campaign that seems less focused on making converts of Silver’s longtime supporters — many of whom are older Jews who live along the thoroughfare of Grand Street — and more focused on increasing voter turnout among young people in the district. According to Evan Hutchison, Newell’s campaign manager, a mere 17% of registered Democrats in the district turned out to vote in the 2006 primary when Silver’s seat was last up for grabs. Silver had no opponent.

But Hank Sheinkopf, a longtime New York political consultant who has been watching the race, said bluntly that Newell “should save his money” rather than taking on such a formidable foe.

“The reason the so-called Obama effect doesn’t work here is, this is a very different kind of election,” Sheinkopf said. “This is a much more personal contest than that. It is ultimately about Silver’s role as assemblyman, not as speaker; about whether he’s provided a service for people who live there. And he has.”

Newell maintains that flying in the face of conventional wisdom will work to his advantage. But his political greenness — his previous political experience has been limited to working on the campaigns of Bill Bradley, who lost his bid to become the Democratic presidential nominee in 2000, and Barney Brannen, a would-be New Hampshire congressman — makes him a surprising candidate even for some of his admirers.

Nikolai Borodulin, Newell’s onetime Yiddish teacher and a former librarian at YIVO whom Newell assisted in the archives there, said that although his student’s intellectual curiosity had impressed him, he did not see him as a likely politician.

“I didn’t see him as official; he was very informal,” Borodulin said. “He’s more like a literary person who liked to do research or poetry.”