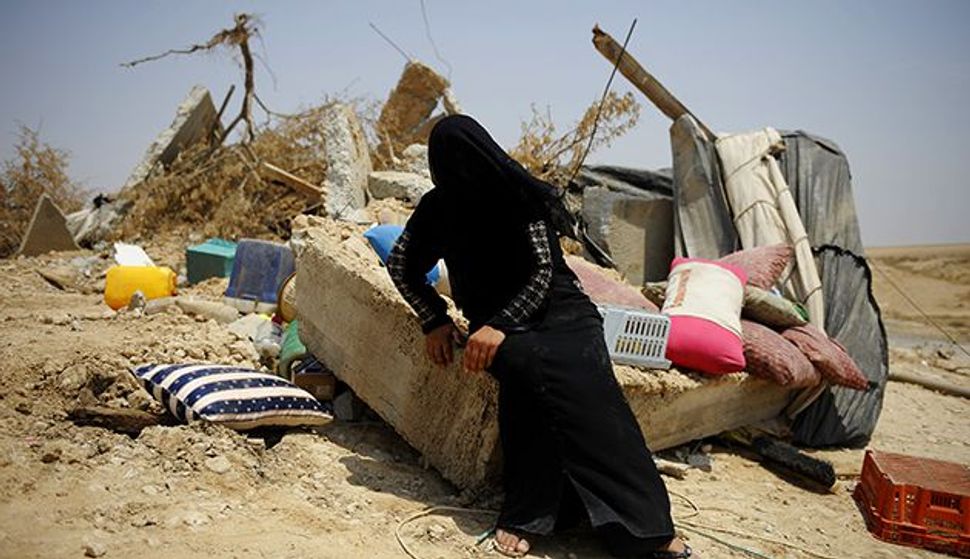 What Remains: In the village of Al-Arakib, a Bedouin woman sits amid the ruins of her family?s house, demolished last year by Israeli officials because it was built without a government permit. Image by Getty Images

A challenge to the tax-exempt status of Jewish National Fund’s American arm introduces a new wrinkle into an ongoing debate over how the Internal Revenue Service should treat charities whose foreign operations run counter to public policy of the United States.

A coalition of anti-Zionist groups has claimed in its challenge that JNF ethnically discriminates by refusing to sell or lease its land in Israel to non-Jews.

It has long been established that a tax-exempt organization that violates the laws against racial and ethnic discrimination within American borders would likely lose its exempt status. But the IRS has not taken action when that discrimination occurs overseas.

Tax law experts say that the coalition’s argument has little chance of success.

“We could argue that this would clearly be illegal and therefore violate the public policy doctrine in America, but the question is, since it’s happening in Israel, can we apply the same analysis?” asked Nicholas Mirkay, a law professor at Widener University.

The ban was affirmed by a landmark 1983 Supreme Court ruling in a case involving Bob Jones University, an evangelical Christian school in Greenville, S.C., that sued the IRS after the agency revoked its tax exemption over the school’s policy banning interracial relationships. The Supreme Court sided with the IRS, stating that “an institution seeking tax-exempt status must… not be contrary to established public policy.”

But the ruling did little to define what the Supreme Court meant by “established public policy.” So far, the precedent has been applied in only a narrow set of instances. Efforts to lobby the IRS to revoke the tax-exempt status of American groups that fund exclusively Jewish settlements in the Israel-occupied West Bank, for instance, have gained little traction. Some opponents of these settlements have argued that they conflict with long-established American foreign policy that labels the settlements as “impediments to peace.” But legal experts say American foreign policy has never been interpreted to fall within the rubric of established public policy.

The new complaint takes a different tack. In a March letter to the IRS, the groups opposed to JNF’s exempt status focus on the alleged racial discrimination practiced by the organization’s Israeli arm — a set of facts closer to the facts of the Bob Jones case, which also dealt with racial discrimination.

The letter targeting JNF was issued by the Stop the JNF Campaign, an international effort targeting the historic Zionist organization, which owns about 13% of all land in Israel. The campaign’s website criticizes JNF for its role in the “on-going displacement of indigenous Palestinians from their land.”

The campaign is endorsed by 108 organizations internationally, according to the website, including American Jews for a Just Peace, Al Awda-NY: The Palestinian Right to Return Coalition, Churches for Middle East Peace and the International Jewish Anti-Zionist Network.

Jodi Bodner, an American spokeswoman for JNF, did not respond by press time to questions she had requested be submitted by e-mail.

In its letter to the IRS, the Stop the JNF Campaign writes that JNF activities in Israel and the West Bank “are both contrary to the public policy of the United States and inconsistent with activities of a charitable or environmental organization.” It cites what it calls “discriminatory” JNF policies against selling land to Palestinians, among other things.

Legal experts who give the campaign little chance of success highlighted the fact that charities violating the public policy doctrine abroad face no risk of losing their exempt status.

“If you denied housing to an Arab here in the United States, that would probably violate some housing statute. It would seem to me you have some illegality there,” said Mirkay.

But Mirkay said that this doesn’t mean a charity would lose its exempt status for practicing racial or ethnic discrimination abroad. “There’s nothing that says you can take what would be an illegal act in the United States and say if you’re doing it abroad, that somehow violates public policy,” he said.

But he pointed to signs that the agency is taking a hard look at the question.

In March 2010, an official with the IRS division that handles exempt organizations told a tax law convention that the agency was preparing to address the international activities of tax-exempt groups in a new publication, according to The Exempt Organization Tax Review, a trade publication. And in August, a right-wing pro-Israel organization called Z Street filed a lawsuit claiming that its application for tax-exempt status was being delayed because it opposed the Obama administration’s Middle East policies. Tax law experts called the Z Street claims far-fetched, though the case is still pending.

Recent statements “seem to point to the fact that the IRS has definitely got its radar up on this issue,” Mirkay said. “The question is how they’re going to proceed.”

Another tax law professor warned that the alleged discriminatory activities of JNF and the facts of the Bob Jones case are not necessarily parallel. “I do not think racial [discrimination] in America, with our own unique history, is the same as the unique situation of Israel and the Palestinians,” Ellen Aprill, a professor at Loyola Law School, wrote in an e-mail.

The Stop the JNF Campaign comes at a time when land-use policies of JNF are coming under increased criticism. The U.S. Department of State’s annual report on human rights in Israel, released in March, noted that the organization does not allow land it owns to be leased or sold to non-Jews.

And JNF has come under fire in relation to the repeated demolition of Al-Arakib, an unrecognized Bedouin village in the Negev that sits on land where JNF plans to plant a forest.

Still, not all of JNF’s critics support the campaign’s tactics.

“I don’t disagree with the basic statements that the authors of this campaign put forward in their letter,” said Doni Remba, executive director of the Jewish Alliance for Change, which has partnered with Rabbis for Human Rights — North America in its own campaign against JNF policies toward the Bedouin. Remba said that he, too, opposed JNF policies barring land sales to non-Jews.

But he criticized the effort to strip the organization of its not-for-profit status. “This tactic is the tactic of a movement that is anti-Zionist,” Remba said. “It is opposed to the very existence of the Jewish National Fund, and of institutions like it, and of the State of Israel. We are a pro-Israel and Zionist organization, so we support, obviously, the State of Israel, and we want there to be a Jewish National Fund. We believe that JNF has to redefine itself for this day and age.”