In N.Y. Town, Orthodox and Locals Vie for School Control 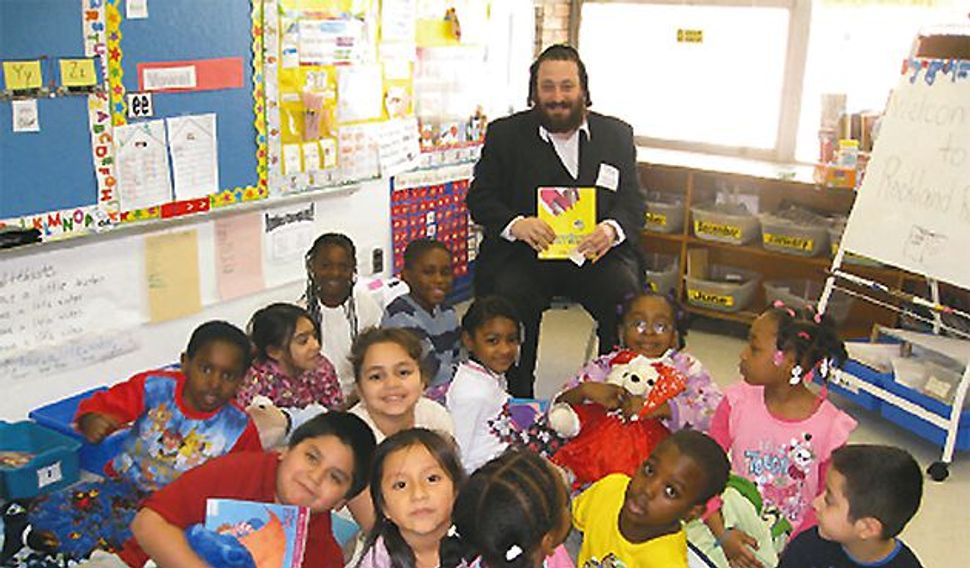 Vice President: Aron Wieder (center) will not run for re-election to the board of the East Ramapo Central School District. Wieder was one of five Orthodox Jews on the nine-person board. Image by courtesy of aron wieder

The battle between a New York Orthodox Jewish community and its neighbors over the local public school system took a drastic turn in late April as the school board’s Orthodox president resigned amid corruption allegations, and a federal official confirmed a civil rights investigation into the district.

While the corruption allegations against the board president relate to his alleged conduct in another elected office, the rapid-fire developments come after months of growing tensions between the Orthodox-dominated board of Rockland County’s East Ramapo Central School District and the district’s non-Orthodox residents.

The latest revelations come as the board begins again to consider selling a public school building presently being leased to two Orthodox yeshivas.

Tensions over the Rockland County schools mirror tensions in the handful of cities and towns across the country, where expanding Orthodox communities have chafed with locals. But coexistence in this New York State suburb has proved to be particularly fraught.

With school board elections less than a month away, critics of the board hope that the accumulating developments will spell defeat for the current Orthodox majority. But some observers worry that even an electoral shift won’t solve the district’s mounting problems.

“This year will be an eye-opening year,” said JoAnne Thompson, a current board member running unopposed in the upcoming election.

Just 40 minutes from Manhattan, East Ramapo is an ethnically diverse school district in the heart of Rockland County. The district encompasses two centers of the county’s burgeoning Orthodox population: the Hasidic enclave of New Square and the Orthodox hamlet of Monsey. Though members of the Orthodox, ultra-Orthodox and Hasidic communities in the district largely send their children to private religious schools, they held five of nine seats on the East Ramapo Board of Education until the board president’s recent resignation. Four of the five are Hasidic.

According to the state education department, 54% of the district’s 8,000 public school students during the 2009–2010 school year were African American; 30% were Hispanic. Half were eligible for free-lunch programs, a marker for low-income families.

The school board has been the subject of criticism in recent months by numerous civil rights groups, including the Spring Valley branch of the National Association for the Advancement of Colored People, the Anti-Defamation League’s New York region and the New York Civil Liberties Union, all of which have raised concerns about possible discrimination resulting from board policies.

In March, the NYCLU issued a letter to the school board, raising concerns about a proposal to absorb a private religious school for Yiddish-speaking special education students into the school district. That proposal has since been dropped, but it appears that it may have been the precipitating event in the recently announced investigation into the district by the Office for Civil Rights of the U.S. Department of Education.

The existence of an investigation was announced April 18 by the Spring Valley NAACP, and was confirmed by Stephen Price, a Board of Education member. Price said that the board had received a letter alerting it to the investigation from the Department of Education.

“What I can tell you now is that our Office [for] Civil Rights has received the complaint and is currently investigating,” DOE spokesman Dave Thomas wrote in an e-mail to the Forward.

Oscar Cohen, a local NAACP member acting as spokesman for the Spring Valley NAACP, would not comment on the nature of the complaint his group submitted to the DOE. But last January, NAACP chapter president Willie Trotman sent a letter to the East Ramapo school board’s president and the district superintendent, warning against the now dropped plan to absorb the Yiddish-speaking private special education program. Trottman’s letter pointed out this would involve the school district in taking over an all-white, all-Jewish school.

“We urge you to examine potential changes in the context of their violating the civil rights of any group of children and their parents,” Trotman wrote.

The recently resigned school board president, Nathan Rothschild, was a particular proponent of that takeover plan. Though Rothschild told the Forward in January that he did not plan to run again for school board, his April 14 resignation came sooner than expected. The following day, he appeared in U.S. District Court in White Plains, N.Y., on felony mail fraud charges.

The charges stem from Rothschild’s time as an elected commissioner of the Monsey Fire District. According to court documents, Rothschild allegedly settled a personal debt by setting up a real estate deal between the fire district and someone to whom he owed money. Neither the creditor nor the amount of the debt is specified in court documents, and a spokesman for the U.S. Attorney for the Southern District of New York declined to elaborate.

Rothschild faces a single charge carrying a maximum penalty of 20 years in jail. He pleaded not guilty on April 15 and was released.

“As things stand today, he’s simply pled not guilty and awaits a trial date,” said Michael Burnbaum, Rothschild’s attorney. “If they would like us to cooperate, we are happy to do so.”

“I was definitely shocked,” Thompson said of her reaction upon learning of the charges. She said that Rothschild told the board days earlier that he would resign on April 14 but didn’t say why. Thompson said that she and others had at first thought he was joking. “Many people know that he’s a kidder,” Thompson said of Rothschild. “I don’t think anybody anticipated what we found out on Friday.”

Thompson, who was appointed to the board last fall, said that she was open to investigate whether anything like what Rothschild has been accused of doing as Monsey fire commissioner occurred at East Ramapo. She said she was unaware of any current plans for investigations.

Rothschild had lost his position as a Monsey Fire District commissioner last December, when he was defeated by a Monsey resident named Elye Kramer. He sued Kramer and the fire district following the election, asking that the results be nullified and that he be declared winner or a new election be held. According to court documents, Rothschild claimed that some poll watchers spoke in Yiddish to voters, telling them, “The rabbis changed their minds” and that they should vote for Kramer, not Rothschild. Kramer disputes this. The case appears to be ongoing.

Meanwhile, Kramer is among the three candidates running for Rothschild’s former seat on the East Ramapo Board of Education.

Also running for Rothschild’s seat is Yehuda Weissmandl, a Rockland County property developer who faced criticism over a road that was mysteriously cleared through a fence between the Hillcrest School’s playing fields and the Hasidic town of New Square, which abuts the school’s back fence. Weissmandl, who was overseeing construction in the area at the time, said the fence had been knocked over by a tree.

The appearance of the road set off a firestorm, as the sale of the building had not yet been approved.

Weissmandl did not respond to messages left at his business before and during the last two days of the Passover holiday.

The sale of the Hillcrest School is still on hold, pending review of an appeal by a local activist to the state education department.

Meanwhile, board members appear to be moving forward on the possible sale of another district school. Merrill L. Colton Elementary, which was shut down in 2009, is currently under lease to two Orthodox yeshivas. According to published meeting agendas, the board discussed the school’s real estate in a closed session April 12. According to multiple sources, the board is now considering selling the property.

“The discussion we’ve been having is with regard to the future of Colton,” Thompson said. “As far as whether that means a sale or a rental or a lease or continuing as is, that I’m not at liberty to say.”

The board faced criticism for the manner in which Colton was closed, though an appeal to the state education commissioner was dismissed.

School board elections are set for May 17. Four of the board’s nine seats are up for election. Three of those seats are contested, and two of those lack incumbents. One of the empty seats is Rothschild’s; the other is currently held by the board’s vice president, Aron Wieder, who was widely seen as the leader of the board’s Hasidic faction. Non-Orthodox critics viewed him as a particularly polarizing figure.

In an e-mailed statement explaining his decision not to run for re-election, Wieder wrote, “I am doing so out of the spirit to bring the communities together.”

The May 17 ballot will also include a referendum on the school district’s 2011/2012 budget, which was adopted by the board March 30. The adopted budget plan calls for a 8.9% increase in property taxes, according to school district documents. But the budget referendum failed the first time last year, and its passage this May is far from certain.

Meanwhile, school board meetings continue to be acrimonious. A video of an April 12 meeting posted online by Antonio Luciano, the third candidate for Rothschild’s seat, shows the school board’s lawyer engaging in a shouting match with an audience member who heckles him during the reading of a resolution. The lawyer calls the audience member a “loudmouth rabble rouser” and asks that she be removed from the room.

Critics of the school board say they hope to be able to tip the balance. But some say that an electoral shift won’t necessarily bring change. “If the non-Orthodox candidates win, the balance will have turned,” the NAACP’s Cohen said. “I don’t think that’s the ultimate solution, because that’s a power struggle. I think the ultimate solution is getting the parties together, regardless of who is on the board.”

In N.Y. Town, Orthodox and Locals Vie for School Control