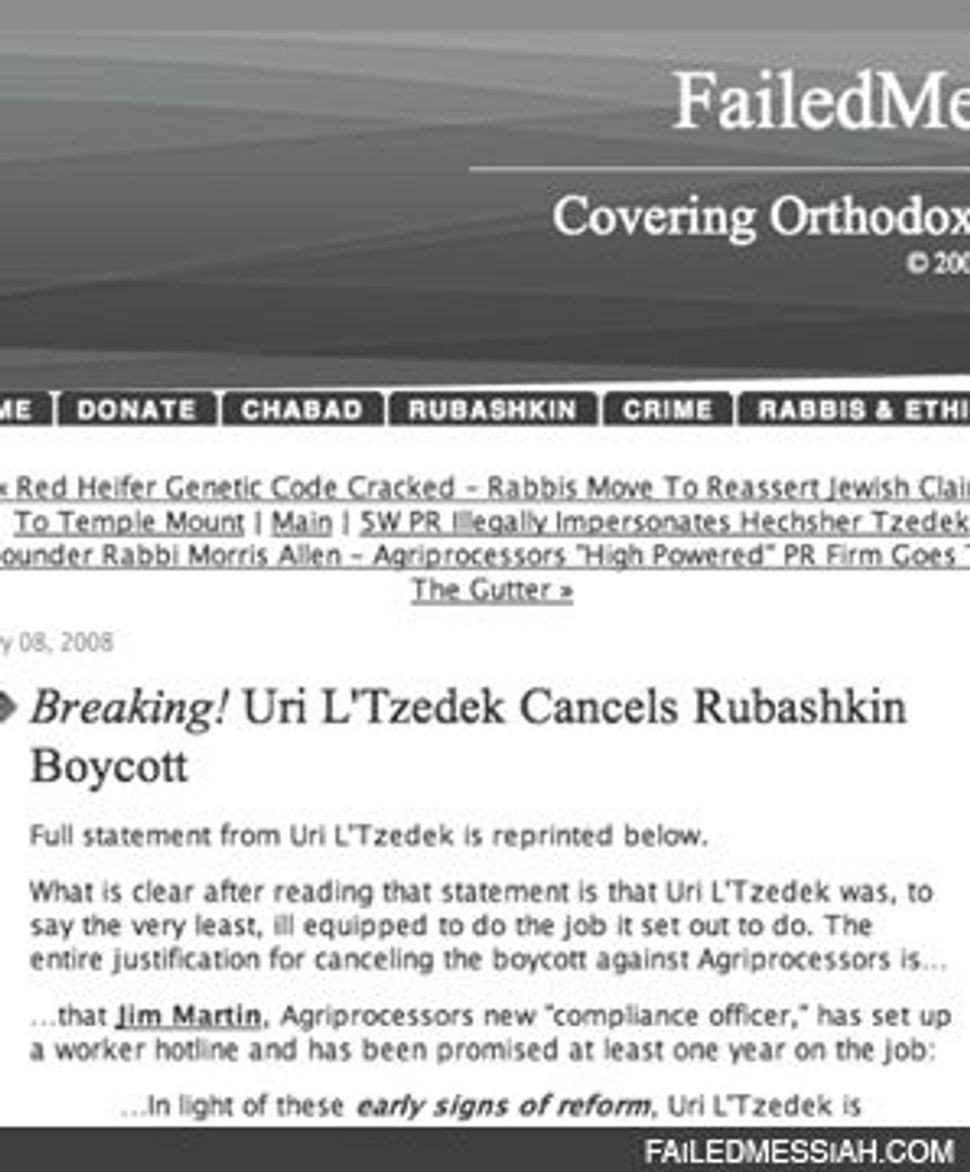 BLOG: This posting on the blog FailedMessiah elicited a number of fraudulent comments that appear to be from a public relations firm.

Read an update to this article here. 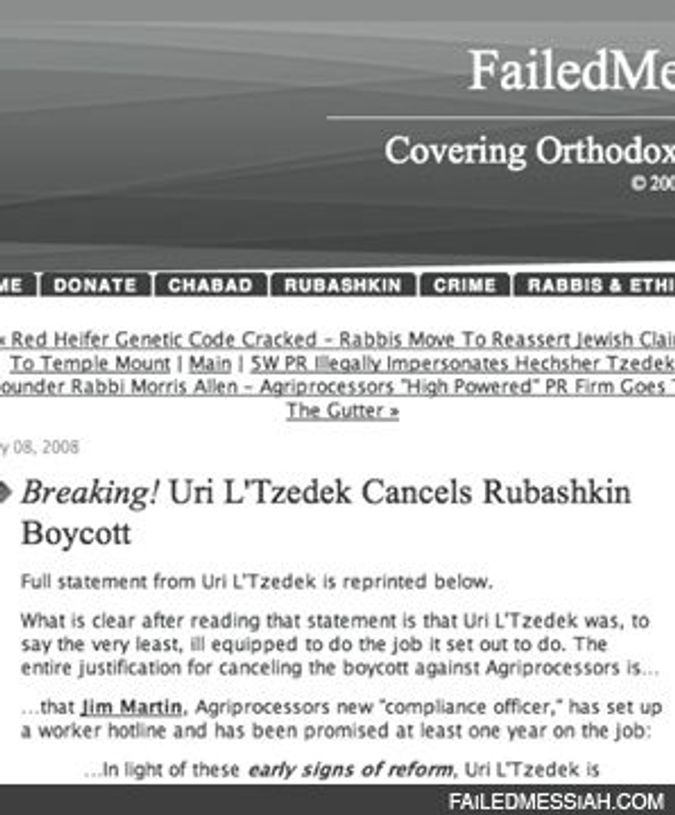 BLOG: This posting on the blog FailedMessiah elicited a number of fraudulent comments that appear to be from a public relations firm.

A prominent New York public relations firm has privately acknowledged making fraudulent postings on the Internet about one of its clients, a kosher meat company.

An employee at the firm, 5WPR, made the admission to the operator of the blog FailedMessiah.com, Shmarya Rosenberg, during a phone call, according to a recording of the conversation that was shared with the Forward. The acknowledgement came after Rosenberg presented evidence on his Web site that someone at 5WPR had left fraudulent comments on his blog under the names of other people — including a rabbi who has been critical of the public relations company and its client.

The comments in question were about Agriprocessors, a kosher meat company that was recently the target of a massive federal immigration raid. 5WPR began representing Agriprocessors in June.

Soon after Rosenberg posted evidence of the fraudulent comments on July 9, the 5WPR employee who has been handling the Agriprocessors account, Juda Engelmayer, called Rosenberg and apologized, according to the recording of the call. In the call, Engelmayer said that an intern in the company had made the postings and had been fired.

“It was a dumb, dumb mistake,” Engelmayer said in the recording of the phone call. “It’s just horrible.”

When asked about the call by the Forward, Engelmayer said he would not comment on the situation.

The Forward spoke with the CEO of 5WPR, Ronn Torossian, prior to learning of Engelmayer’s admission. Torossian told the Forward that his company was doing an internal investigation to determine whether the postings had, in fact, come from his firm.

Torossian said he did not know when the investigation would be complete but added, “I have complete confidence in knowing that my account team who runs these accounts did not make these posts.”

According to Rosenberg’s investigation, there were more than 40 comments left on his blog over a number of weeks from computers at 5WPR. Comments similar to the ones on Rosenberg’s Web site were left on other Jewish-oriented blogs.

Representatives of Agriprocessors did not respond to calls for comment.

5WPR boasts a client portfolio that has included an unusual mix of corporate clients, hip-hop stars, Jewish groups and Israeli political figures. When Agriprocessors hired 5WPR, a spokesman for the kosher meat company said that 5WPR would help confront negative attention that the company was receiving on the Internet. Rosenberg, a Minnesota-based blogger, has extensively covered and criticized the ups and downs of Agriprocessors over the past few years.

Rosenberg began collecting the number that associates a comment with a specific Internet user — the IP address — and when he did a reverse search on the dozens of comments, he says, all of them appeared to come from computers at 5WPR. Rosenberg laid out the graphic evidence of his investigation on his blog..

“I realized what was happening and I just let it go, because I thought it would be interesting to see how long they kept it up and see if they would do anything else stupid,” Rosenberg said.

Two of the postings in question were made in the name of Rabbi Morris Allen, a prominent critic of Agriprocessors and the founder of the Conservative movement’s Hekhsher Tzedek initiative, which is attempting to create ethical standards for the production of kosher food. The first of the comments purporting to come from Allen appeared with his name misspelled. The second, which was made midday on July 9, came at the same time that Allen was presiding over the funeral of his aunt in Omaha, Neb.

Both comments were in response to a blog post by Rosenberg about the decision by an Orthodox Jewish group to end a boycott of Agriprocessors. The comment made it appear that Allen was gloating over the move by another critic of Agriprocessors.

“This doesn’t rile us,” the comment said. “This is a cause. Agriprocessors is the drive for us.”

Allen told the Forward that the postings left him concerned for his safety and for the reputation of Hekhsher Tzedek.

“I’m increasingly concerned about my own safety because if you begin to engage in this kind of behavior, I just wonder where it ends,” he said.

A spokesman for Hekhsher Tzedek said that the group is consulting an intellectual property lawyer and planning to take legal action against whoever made the fraudulent comments.

Paul Levy, an attorney at the Public Citizen Litigation Group, said that the success of any legal action would depend largely on state law and on whether the comments were defamatory.