A Poet of Jewish Spiritual Life and World Literature 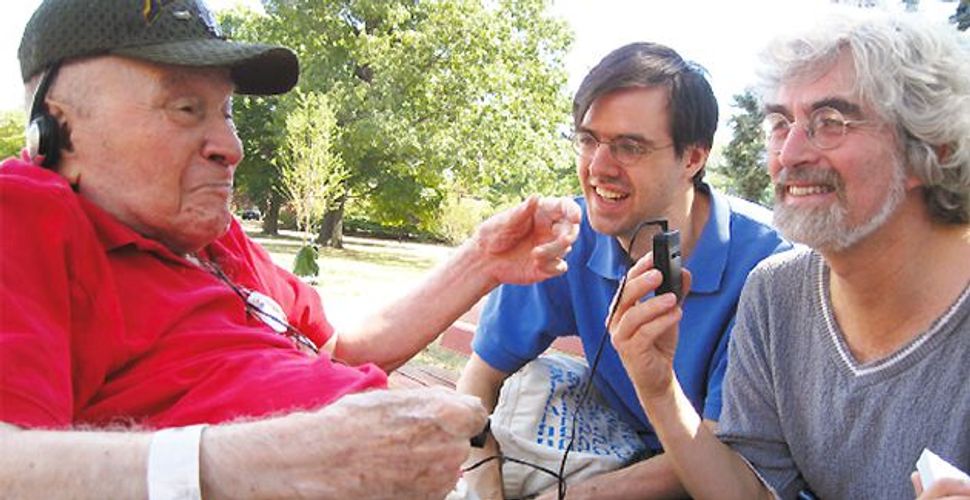 Not Forgotten: Poet Jeremiah Hescheles (left) was a resource for the study of Eastern European Jewish life among scholars and Yiddishists. Above, Hescheles speaks with the Forward?s Itzik Gottesman (right) and Alec Burko. The poet died in October 2010 at age 100. Image by JANINA WURBS

Maybe it’s a sgule — a remedy prescription, for long life — to become a Yiddish writer. Itche Goldberg and Mordkhe Tsanin both died at the ripe old age of 102 a few years ago; poet Avrom Sutskever died in 2010 at 96. Now the New York Yiddish world has lost another wonderful poet, Jeremiah Hescheles, at the age of 100.

For a number of years, Hescheles had been in a long-term care ward at the Veterans Administration hospital in the St. Albans section of Queens, a facility that, unfortunately, was neither welcoming to visitors nor helpful on the phone. When I inquired about the date and cause of his death, asking higher and higher in the hospital’s bureaucracy, no one would reveal them to me, even after I explained that the information would be used to write an obituary. After an hour or so, I tried another route: Google, which gave me one of the answers in 10 seconds — October 16, 2010.

Jeremiah (in Yiddish, Yermye) Hescheles, a modernist poet who grew up in the Polish-Galician town of Glina, Poland (today Ukraine), not far from Lemberg (today Lviv), became a resource for the study of Eastern European Jewish life among scholars and younger Yiddishists. His own family was of the upper-middle class, but he became acquainted with all the types in his town and would later incorporate that familiarity into his poetry and fiction. He began writing in the 1930s for Yiddish periodicals and newspapers in Lemberg.

He studied first in a yeshiva, and then took up the violin at the conservatory in Lemberg. Back in his hometown he hung around with klezmer musicians, and in the 1930s, during the Depression, he became a kapelmeister, a bandleader, when sources of income were scarce.

Arriving in New York in the late 1930s, Hescheles looked up his Glina-compatriot, Yiddish poet Abo Stolzenberg (1905–1941), who warmly acquainted him with the New York Yiddish scene. Stolzenberg, who today is recognized as a great Yiddish modernist, had apparently stopped writing poetry for years, but the arrival of his friend inspired him to take up the pen again, creating some of his best work until his premature death.

Hescheles hooked up with fellow Galician writers and musicians in New York. Berish Katz, a fiddler and badkhn, wedding jester, got him a job on the set of Edgar G. Ulmer’s 1939 Yiddish film “The Light Ahead.” Hescheles can be seen playing violin in a late scene in the film.

For most of his New York life, Hescheles wrote for the Yiddish Newspaper Tog-Morgn Zhurnal, in which he published both fiction and nonfiction pieces. When I first met Hescheles, at a Yugntruf — Youth for Yiddish gathering in the mid-1980s, he described (or more accurately, acted out) the daily scene in the paper’s newsroom, comically impersonating every writer and his respective strange habits or speech. His performance was a tour de force, and it was hard to believe how little known this treasure was at that time. Certainly Hescheles was partially to blame: A loner by nature, he rarely attended Yiddish literary events, preferring instead to stay home and read.

Upon discovering my interest in Yiddish folklore, his eyes lit up. We decided to meet regularly, in a coffee shop around the corner from his apartment on Seventh Avenue and 15th Street, to discuss the topic. After a few months, his health declined, so we moved our meetings to his apartment. The space was crammed with books in many languages, including Latin and Greek, which he studied.

Usually I would come to him prepared with a Yiddish text from Galicia, dating back to the 19th century. It was often an ephemeron — a short pamphlet, or parodic songs composed for a specific occasion — and we would sit and analyze. Generally speaking, I needed his help not with the pshat, the literal meaning of the words, but with the deeper Galician Yiddish parodic connotations, which I could sense I was missing.

Every discussion would be enlightened by Hescheles’s acquaintance with numerous spheres of knowledge — from the Talmud, from the satiric yeshiva world and from the satiric maskilic anti-yeshiva world. He would always conclude with a Yiddish joke, often vulgar, that he had heard on the street.

Though he arrived in the 1930s, Hescheles was one of those “sponges” with the ability to pick up oral histories that predated his life and immigration. He would tell me hilarious anecdotes about Yiddish writers at cafes of Manhattan’s Lower East Side and on Second Avenue from the 1910s and 1920s. When musicologist Zev Feldman visited him to explore the klezmer world of Glina before the war, Feldman ended up learning an entire history of klezmer music in Galicia, beginning in the mid-19th century.

Though classically trained, Hescheles understood both the folkier klezmer and the classical music worlds. He told Feldman at the beginning of their meetings that “klezmer music is the fiddle.” So much for the popular clarinet that marked American klezmer in the 20th century. Hescheles loved the older folkways of Jewish life and was enthralled about passing on that appreciation to the next generation.

Hescheles’s poetry connected to both Jewish spiritual life and world literature and perspectives, from the Talmud to Dante, and his kind is found rarely these days.

A Poet of Jewish Spiritual Life and World Literature