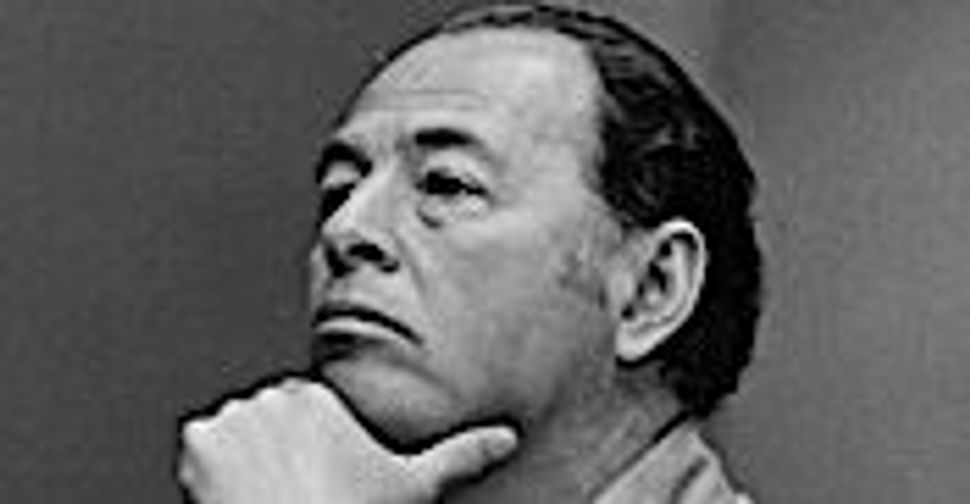 Intellectual: (Right) Gus Tyler, pictured during the 1960s, was a guiding force in the International Ladies? Garment Workers? Union. (Center) Tyler in his Army Air Corps uniform. (Left) The Tilove Family, Gus at right. Image by COURTESY OF THE TYLER FAMILY

Uncle Gus is gone, and with him, some sense that there’s any order to the universe.

To readers of the Forward, Uncle Gus was Gus Tyler, whose association with this newspaper stretches back to 1932, the year he graduated from New York University and was hired to be the assistant to labor editor Louis Schaefer.

Well into his 90s, Gus, who died June 3 in Sarasota, Fla., four months shy of his 100th birthday, continued to write an opinion column for the English-language Forward. He also wrote for the paper’s “Der Yiddish-Vinkl” feature, a bilingual potpourri of light-hearted poetry and prose, and was a long-time commentator on WEVD, the radio station owned by the Forward Association until 2003.

To the wider world, Gus was a guiding force at the International Ladies’ Garment Workers’ Union and in left-leaning labor politics for more than 40 years. He retired from the ILGWU, where, in addition to his official roles, he was the union’s roving in-house in-tellectual and political strategist. During his tenure, he served in various capacities including as political director, director of education and assistant president, under David Dubinsky, Louis Stulberg, Sol “Chick” Chaikin and Jay Mazur.

Over his lifetime, he was a prolific lecturer, teacher and writer of more than a dozen books and countless articles for such small but influential periodicals as The New Leader and Dissent magazine.

“There are those who say that the history of the democratic left in America since World War I is the history of Gus Tyler,” historian Bernard Bellush wrote in the Forward in October 2001 on the occasion of Gus’s 90th birthday.

To me, of course, he was Uncle Gus, my father’s older brother. Whereas my father, who was two years younger than Gus and who died 10 years ago, was careful, skeptical and precise, Gus was sweeping and certain.

A year ago, after a fall, Gus found himself in rehabilitation for a while, no longer able to put down his thoughts on his computer. But he told me that while lying in bed during his recovery, he had devised a plan in his head to stave off the coming world economic collapse. If he could get it down on paper, the world could be saved; if not, good luck to the world.

And so it was: Good luck to the world.

My Uncle Gus was born Augustus Tilove in Brooklyn to Yiddish-speaking immigrant parents from Lithuania and Odessa. He joined the Young People’s Socialist League in his early teens and, in high school, he was editor of the Socialist Party’s youth magazine, “Free Youth.” He wrote under the pen name Tyler, an homage to Wat Tyler, the leader of a 14th century peasant rebellion in England. The name stuck and, eventually, Gus changed it legally to Tyler.

During the 1930s and 1940s, Gus was on the front lines of the factional disputes rife within the Socialist movement — quitting for a short while his job at the ILGWU when the union backed Franklin Delano Roosevelt for president over the Socialist Party candidate. He later quit the Socialist Party over his support for the U.S. entering World War II, in order to stop Hitler.

Back in 1987, when he wrote a New York Times review of Maurice Isserman’s book, “If I Had a Hammer: The Death of the Old Left and the Birth of the New Left,” a reader wrote in complaining that he should not been given the reviewing assignment. After all, the reader argued, wasn’t this the same man that Max Shachtman, one of the subjects of the book, had written about in a 1937 article, titled “The Politics of Gus Tyler — A Genuine Case of Rotten Liberalism in the Party,” published in the Trotskyite paper, Socialist Appeal?

Perhaps. What I do know is that Gus and my father, Robert, and many of their fellow former YPSL members lived lives of extraordinary purpose and remarkable fidelity to the ideals and passions of their youth.

In an interview in 1988 with Newsday’s David Firestone, Gus explained: “As far as my mother was concerned, socialism was really what God ordained. You didn’t learn it from Marx or from anybody; it was just the natural thing. People are people and they shouldn’t be rich and they shouldn’t be poor.”

In a 1994 interview on NPR’s “All Things Considered,” Gus recalled his first street-corner speech, made when he was about 13, drawing passersby to him by telling the story of a man named Thomas Fortune Ryan who, though long dead, was still accumulating millions of dollars in interest on his estate — dollars, he told his listeners, that “multiply on your sweat.”

I can easily imagine Gus drawing a crowd.

There was about him a dramatic flair, a force of intellect, a spark of wit, an appreciation of the absurd and yet an assurance that he knew what the world was about, where history had been and where it was headed — and, just as important, that he had a sense of where it ought to be headed.

A few years ago Gus told me that my father wrote only one book — the definitive “Public Employee Pension Funds”— while he wrote books on everything from labor to organized crime to Mexican-Americans, because my father was a perfectionist and “I just churn them out.”

A perfectionist myself, I can attest that churning it out has much to recommend it — not the least of which is Gus’s lifetime of non-stop, consequential churning.

When I last saw him in April, after another fall landed him back in rehabilitation, he was still predicting he would live to be 120, “like Moses.”

It was typical Gus to place himself in such company, but who was I to doubt?

When his strong and devoted wife, Marie, died more than three years ago, I worried how long he would last. But the next time I saw him, he looked several years younger. I wondered whether, closing in on 100, he had begun some kind of reverse aging that would end with his disappearing into infancy at the dawn of the 22nd century.

It was not to be, and there is no better place to bid Gus goodbye than the pages of his revered Forward — a reverence passed down from his parents. Writing on the occasion of the paper’s 110th birthday in 2007, Gus recalled his mother throwing back a piece of fish at the fishmonger when it came wrapped in the paper. “If you have to wrap the fish in a paper,” she scolded him, “use The Times.”