New Square: Where Tradition and the Rebbe Rule 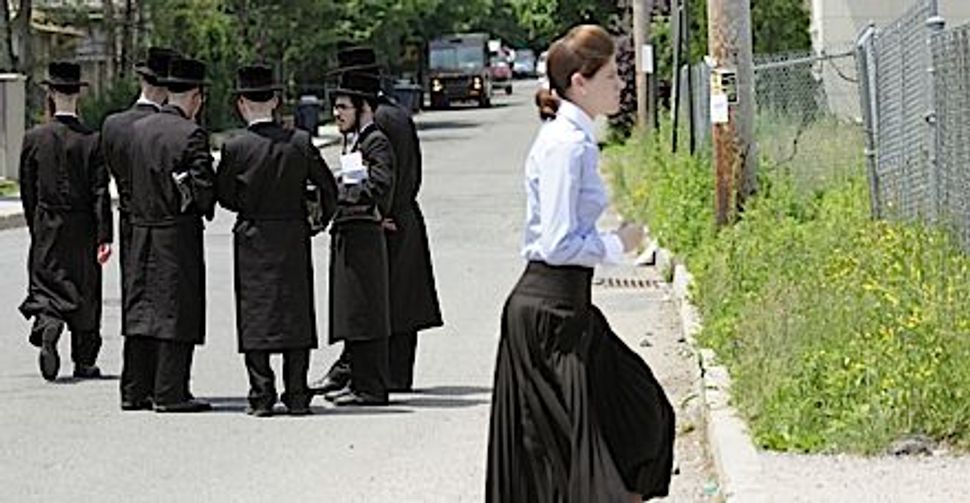 Residents of this Hasidic enclave a mere hour north of Times Square do not live like people in most of the state or, indeed, like most of the country.

Among other things, New Square residents must walk streets strictly divided by gender, with women on one side and men on the other, as Yiddish signs posted on telephone poles lining those streets dictate. Women are not allowed to drive. And students at New Square yeshivas who wish to travel outside the town must obtain permission from the yeshiva — not just from their parents — before doing so.

“The whole community was built for one purpose,” said Ezra Friedlander, a public relations consultant to numerous ultra-Orthodox communities. “It’s perceived as a place to live within the very strict confines of tradition, attitudes and customs. And part of that is you’re part and parcel of a very strict communal structure.”

It is a way of life dictated by the New Square sect’s 70-year-old Grand Rabbi, David Twersky, who has headed the Skver Hasidim since 1968. He inherited the community from his father, Yaakov Yosef Twersky, who led a small group of Holocaust survivors to found the village in 1954 as a refuge from the modern world.

New Square, which lies within the Rockland County town of Ramapo, grew from 4,000 to 7,000 residents between 2000 and 2010, according to U.S. Census data. And in recent years a faction of residents has emerged that harbors modest ambitions of loosening the grip exercised by Twersky.

On May 22, the group’s longstanding complaints about harassment and intimidation by Twersky’s followers were starkly highlighted when Aron Rottenberg, one of its members, almost died in an arson attack on his home. Rottenberg suffered third-degree burns over half of his body when he confronted an intruder carrying a plastic bag full of gasoline and a torch at 4:12 a.m. Shaul Spitzer, the 18-year-old suspect apprehended by police, also suffered serious injuries in their struggle. Both men remain hospitalized, with Spitzer free on $300,000 bond. At the time of the incident, Spitzer worked for Twersky in his home. Rottenberg’s friends and family members say that the 43-year-old local plumber sought only to pray outside the village’s main synagogue, an act that provoked the ire of New Square’s leaders. They say local police and political officials ignored earlier attacks on him and others due to the political clout of Twersky, who directs New Square’s large bloc vote.

Indeed, despite a number of unsolved cases of vandalism and harassment that have have been reported to the police over the last year, town officials initially characterized the attack on Rottenberg as an isolated incident. Ramapo Town Supervisor Christopher St. Lawrence said the day after the attack that New Square Deputy Mayor Israel Spitzer — a cousin of Shaul Spitzer, the intruder whom police are charging with attempted murder, attempted arson and assault — had assured him that the incident was simply the result of a private dispute.

But after a request by Rottenberg’s lawyer, Michael Sussman, for the U.S. Justice Department to initiate a federal hate crime investigation into the attack on Rottenberg’s home, local officials changed their stand.

The earlier crimes “appear not to be isolated incidents,” Detective Mark Emma, a Ramapo police lieutenant, told the Forward in a May 27 interview, speaking on behalf of the Ramapo police department. “We want to find out if anyone else is connected and we want to get to the bottom of this whole thing.”

This is not New Square’s first turn in the spotlight in connection with a scandal. In January 2001, President Bill Clinton commuted the sentences of four New Square officials who had been convicted earlier in a multi-million dollar federal Pell Grant scandal. This was shortly after the village overwhelmingly voted for Clinton’s wife in the November 2000 Senate campaign.

Most of the residents of New Square revere their rebbe as a saint and look to him for guidance on all issues. Even members of the group to which Rottenberg belongs say they do not seek his removal. The residents’ fidelity to Twersky is on display in a weekly ceremony called a tish, where they gather to sing and pray while their rebbe eats, ritualistically partaking in morsels from his meal.

But the audience at the tish has increasingly been composed of yeshiva students who are compelled to attend, say friends and supporters of Rottenberg. They contend that this reflects a larger trend of rule by the rebbe that relies on imposed rather than voluntary obedience.

In fact, many individuals over the years have fled New Square, unwilling or unable to live under Twersky’s rules — among them Lipa Schmeltzer, a wildly popular American Hasidic singer and performer whose songs have made him the equivalent of Paul McCartney for the black hat set. But Rottenberg defied the pressures and insisted on staying.

New Square residents told the Forward that Twersky himself rarely speaks publicly. He instead exerts authority through a body known to all as “the kehillah,” Hebrew for “the community.” The word was also used by Jewish communities in Eastern Europe before World War II to describe the leadership body of a local Jewish community. In Eastern Europe this organization was often elected. But in New Square, say local residents, Twersky appoints its some 15 members.

Friends and family of Rottenberg said the kehillah works through the village’s major institutions, making access to housing, basic services and jobs contingent on observance of community standards. County records confirm that two religious organizations associated with New Square own much of the land and many of the major institutions in the village, including the local synagogue, school system and marriage hall. Kehillah members hold high-level positions in both organizations and at a large medical complex in the village, but Twersky is not legally connected to any of them.

“He has control in practice. But legally, he makes sure to keep his name off the paperwork,“ said David Fromowitz, a lifelong New Square resident who is now moving due to what he describes as harassment similar to that suffered by Rottenberg.

Twersky and members of the kehillah did not return repeated phone calls from the Forward. Hank Sheinkopf, a public relations consultant who has been speaking out on behalf of a group of New Square residents, called accusations against Twersky or the kehillah “speculative.”

“I’ve met with the rebbe and he has been very clear about deploring this incident and continuing to note that this is impermissible and that force is impermissible,” he said.

Rottenberg’s family said his problems began when he decided to attend Sabbath morning services at the Friedwald Center, a nursing home just outside New Square, where his friend was suffering from cancer. Most of the worshipers at the home were not trying to rebel against Twersky, but were simply looking for an alternative to the long, crowded services at the main synagogue, members of that minyan told the Forward.

“Some people feel more comfortable and more spiritually uplifted when they pray in a smaller group. They feel it’s more personal than to pray with a huge crowd,” said Pinchas Dirnfeld, a New Square resident who, unusually, attends Columbia University and sometimes goes to services at the Friedwald Center. But the kehillah demanded the worshipers return to the fold of the main synagogue, and most did, but for a small group of men, who refused.

A few days after Rosh Hashanah in September 2010, five members of this group woke up to find that their car windows had been smashed. Later that day they told a local ABC News outlet that the rebbe was targeting them because they were going to the Friedwald Center rather than the main synagogue. Soon after, most of them returned to the main synagogue or left New Square. But Rottenberg did neither.

On October 19, 2010, at 5:11 a.m., Rottenberg received an anonymous voicemail telling him not to send his daughter, Tzurity, to school or she would be shamed and tormented. When he stepped outside in the morning, he found her desk and school supplies on the front porch. Although he kept his daughter home, someone woke up Rottenberg and his wife two nights later by banging on their bedroom window at 4:30 a.m., according to a police report. As Sabbath ended on Saturday, October 23, a crowd of nearly 300 people gathered outside Rottenberg’s home, most chanting for him to leave, though some supported his family. At 12:54 a.m., on October 29, someone broke a window in Rottenberg’s home. And at 3:13 a.m. on October 30 — on the Sabbath — another window was broken.

Rottenberg reported these incidents to the police and explained that he was being targeted. At his request, the department increased patrols around his home and at one point spoke to Mendel Berger, a kehillah member who Rottenberg suggested could control the violence. According to a police report, Berger “advised that he wanted nothing to do with the situation, and that the Rottenbergs’ problems were their own to handle and he could not and would not assist and refused to speak further.” Despite characterizing the last broken window as a hate crime, the police did not open an investigation.

After this, the incidents abated for a while. But on May 14, three windows were smashed at the Rottenbergs’ house before dawn, which prompted the Rottenbergs to install a surveillance camera.

“The whole family was terrified,” said Rottenberg’s son, Jacob. “I stayed up every night that week staring at the video monitor.”

On the night of May 17, the Rottenbergs’ windows were plastered with stickers saying, “Go in peace.” Later that night, someone called and threatened Rottenberg’s wife, Ruth. She told local media that the caller said, “If we won’t move out, the house won’t be worth a penny.”

At 4 a.m. on May 22, Jacob Rottenberg remembers seeing a figure enter the property on the video monitor the family had installed. He and his father encountered Spitzer outside their home wearing a handkerchief over his face and holding a torch. The elder Rottenberg confronted Spitzer, and in the ensuing struggle, the device exploded, engulfing both men in flames.

After several days of silence, on May 26 Twersky told yeshiva students “the use of force and violence to make a point or settle an argument violates Skver’s most fundamental principles.” But the Rottenberg family continues to hold him responsible.

“If the rebbe had said something or town officials had picked up the phone, this would not have happened,” said Moshe Elbaum, Rottenberg’s son-in-law.

New Square: Where Tradition and the Rebbe Rule