Esther Broner, Activist, Author, Mother of the Women’s Seder, Is Dead at 83 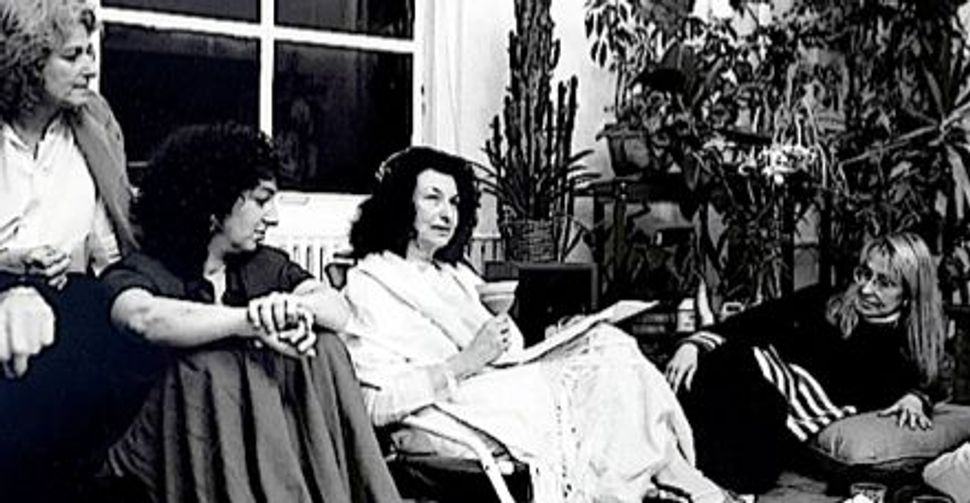 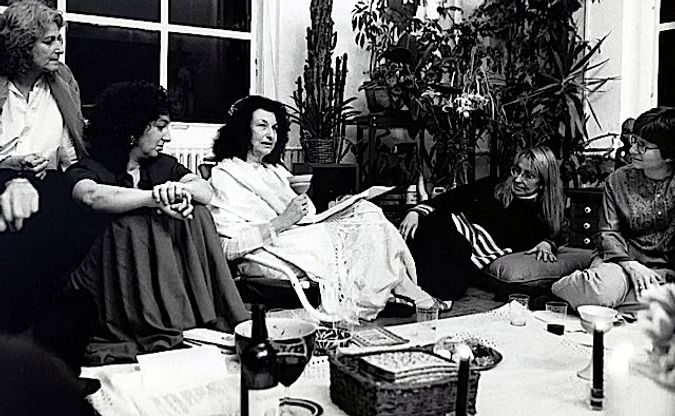 A Women?s Seder: Esther Broner, at center raising a cup, celebrates Seder at the home of Bea Kreloff and Edith Isaac-Rose. To her right are Edith Isaac-Rose and Adrienne Cooper, to her left are Letty Cottin Pogrebin and Martha Ackelsberg. Image by Joan Roth

She was our spiritual leader. She made room for us at the table by creating a whole new one — a Seder table at which women’s voices were heard. She encouraged us to ask the Four Questions of Women and to recite women’s plagues, of which there were always more than 10. She honored our foremothers — not just the matriarchs, but also women in the Bible who are unseen, unsung and unnamed; women scholars of the Talmud; the wives and mothers who made it possible for children to flourish and for men to study Torah: the union organizers, suffragists, partisans, peaceniks, lawyers and legislators who won us our rights. Esther Broner coaxed all these women out of their silence, and in so doing, she empowered our generation.

I speak confidently in the collective plural because I know how many thousands of lives Esther has touched and how many Jewish women walk taller for having followed in her groundbreaking footsteps.

Esther Broner, who died on June 21, aged 83, was the inventor of the original women’s Seder (now proliferating throughout the United States and Israel); co-author with Naomi Nimrod of “The Women’s Haggadah” (published in Ms. magazine in 1977 and later in Esther’s book, “The Telling”); creator of enduring Jewish feminist rituals; published poet, novelist, pamphleteer, autobiographer; literature professor; political organizer, activist and all-around holy troublemaker. But Esther was, above all, a weaver of women.

Deftly, gently, artfully, she took a conglomeration of loose ends — her disparate friends and family, traditionalists, New Agers, militant secularists and unaffiliated strays — and wove us into a tapestry of togetherness. She simultaneously created community and gave us the ceremonies and the vocabulary with which to celebrate it. She wrapped a generation of Jewish women in this rich tapestry and secured it for posterity with the bonds of love. She had a feminist head and a Jewish heart. And, when the occasion demanded, vice versa.

Esther created rituals large and small, public and private, for innumerable people. She used feathers, scrolls, ribbons, artwork, photographs, news clippings, music, oak tag, warm water, a wash bowl and “the sacred shmatte” — a tattered chain of scarves that we wrapped around ourselves at the end of each Seder. And, of course, she used words: lyrical, powerful words. “Why is this Haggadah different from traditional Haggadot? Because this Haggadah deals with the exodus of women. Why have our mothers on this night been bitter? Because they did the preparation, but not the ritual. They did the serving, but not the conducting. They read of their fathers, but not of their mothers.”

She often told me that all human beings, especially women, need kavod, honor, and that it is very important for us to recognize, credit and celebrate each other every chance we get. Esther did all those things better than anyone I’ve ever known. Borrowing from Jewish tradition but bearing her unique creative stamp, she invented ceremonies that made the ordinary sublime. When writer Marilyn French was suffering A grave physical illness, Esther convened what she called “the coven,” a small circle of friends who supported Marilyn through her ordeal. They surrounded her with love, advice, energy and A Broner-esque ritual that —in this case, I’m told — included a good dinner, much hilarity, whispered wishes and a secret ceremony involving sparkly toy wands. When Esther was ill, the coven came through for her — as did about 30 of her other friends who visited, bringing food, books, gossip, and conversation; monitoring her meds; maintaining her files; taking care of her paperwork, and lifting her spirits. You see, we all learned from Esther.

Once, when I confided to her that I was totally stressed out from an onslaught of deadlines and demands, she invited me to her loft and fashioned a ritual to relieve my angst. “Your problem is obvious,” she said. “You’ve lost sight of your boundaries. All we have to do is redefine them.” She unrolled a large swath of butcher paper, instructed me to lie down on it and, with a magic marker, outlined my body. She used a feather to brush off all the stress that had accumulated on and around me. Then she had me stand up, study the outlined figure and repeat, three times, “I have boundaries; I can say no.” At the end of our visit, I brought the paper home with me, and for months afterward, whenever I felt burned out or overwhelmed, I unfurled it and reminded myself that “I have boundaries; I can say no.” And somehow, it calmed me down.

Her readers will remember E.M. Broner as the author of 11 books, including “The Women’s Haggadah,” “A Weave of Women,” “Her Mothers,” “Mornings and Mourning: A Kaddish Journal” and her last novel, “The Red Squad.” Her former students at Wayne State University, Sarah Lawrence College and Haifa University will remember Esther as a passionate literature professor.

Her friends and family will remember her as the devoted wife of the late Bob Broner, a gifted painter and printmaker with whom she shared 62 years of laughter and love; as the mother of the four Broner offspring — Nahama, Jeremy, Adam and Sari — and as the besotted grandmother of Alexandra and Emmanuel. Her fellow members of the congregation B’nai Jeshurun, and its rabbis, Roly Matalon, Marcelo Bronstein and Felicia Sol, will remember Esther as an enthusiastic activist and a goad in the best tradition of all the glorious disobedient women in Jewish history, from Sarah, Miriam, Shifra and Puah to anarchist Emma Goldman and the feisty congresswoman in the big hats, Bella Abzug.

As for me, I will always remember Esther in her long white robe and embroidered yarmulke, handing out fragrant sprigs of rosemary and then leading a parade of women — whether mainstays (the “Seder Sisters”), newcomers or “strangers” — to the Seder table, which was beautifully set, albeit on the floor. I will always be able to conjure her whimsical smile and her distinctive whispery voice asking us to introduce ourselves by our matrilineage — each woman, in turn, speaking the name of her mother, her grandmothers, her daughters — Esther’s way of bringing silenced women out of the shadows and into the light of prayer and ritual.

And I will never forget what she did at this year’s feminist Seder, our 36th (she reveled in our reaching our double chai). In deference to her weak heart and compromised lungs, this Seder took place in my dining room and at a proper table. Esther arrived with her tank of oxygen and 12 colorful 6-by-8 index cards, one for each of us — her daughter, granddaughter and the Seder Sisters, who, along with many of her other friends, had cared for her in various ways throughout the year of her increasing infirmity.

On each index card was a collage of pictures, stickers, quotes, cut-outs and ribbons, and a one-line distillation of how each of us appeared in Esther’s eyes — what we had done for her, what we meant to her. Tears flowed freely as we each read our card aloud, knowing this was Esther’s way of saying goodbye.

Surprisingly, she had also made a card for herself. It said, “Esther Broner: Once she had a shadow. The shadow has been sheared off. Now there remains a trunk of memories of you.”

Even in the leaving, she honored us.

Letty Cottin Pogrebin is the author of nine books, a founding editor of Ms. Magazine and a founding Seder Sister.

Esther Broner, Activist, Author, Mother of the Women’s Seder, Is Dead at 83