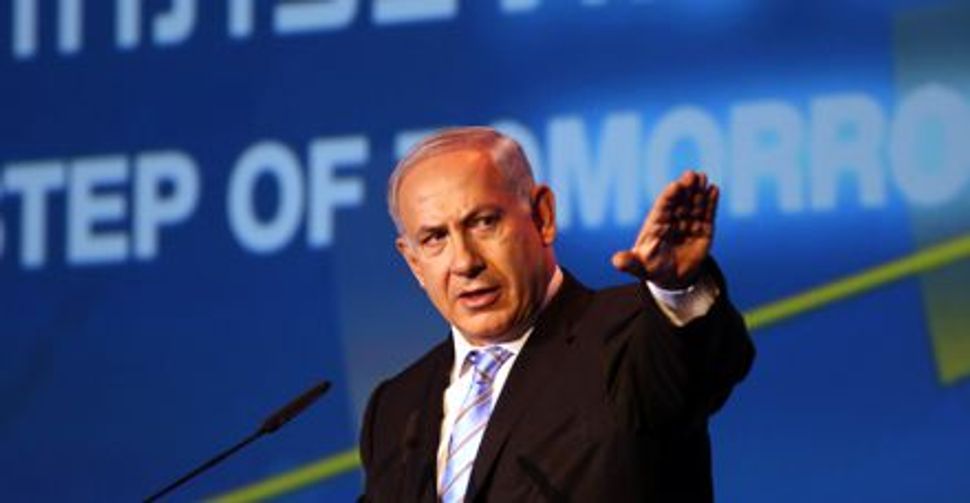 When Israeli Prime Minister Benjamin Netanyahu rose to address the 4,000 delegates at the close of Shimon Peres’s Israeli Presidential Conference in Jerusalem on June 23, he beamed like a film student accepting an Oscar.

It seemed at first glance an unlikely pose; the actual guest of honor was Peres, Netanyahu’s longtime ideological rival. True, the octogenarian statesman is no longer a threat, at least nominally; he was supposed to have left partisanship behind when he assumed the figurehead presidency in 2007. Lately, though, Peres has been openly needling the prime minister, and the three-day presidential conference, heavily dominated by left-of-center speakers, gave Peres a world-class bully pulpit to up the ante. Netanyahu might well have approached the podium with trepidation, but no: He was relaxed, smiling, expansive — and why not? He’s been on a roll lately.

The prime minister briefly regaled the crowd with a catalogue of his government’s triumphs, some of them putative but others very real. He presides over a booming economy that defies the worldwide gloom, with a robust 5% per year growth and unemployment below 6%, one of the lowest jobless rates in the developed world. Construction is thriving, a rarity in today’s global economy. He’s driving an ambitious plan to modernize Israeli transportation with new roads and rail lines, opening up vast new possibilities for development in the hinterland. A worldwide epidemic of computer network hacking has put a premium on Israel’s celebrated high-tech sector, particularly its cyber-security specialty. The borders are quiet, terrorism all but non-existent. The country’s fiercest protests concern the price of cottage cheese.

Most of all, Netanyahu appears to be defying his armies of critics at home and abroad who warn that his hard-line stance toward the Palestinians is paving the road to disaster in the coming months.

For all the warnings, the Palestinian drive for statehood via a United Nations resolution in September is sputtering, owing to Palestinian divisions, European hesitation and the Obama administration’s bare-knuckles diplomacy. President Obama himself, though seen as committed to Israeli-Palestinian compromise, has mostly backed off in the face of domestic pushback orchestrated by Netanyahu.

Easing of Israeli roadblocks and other security measures in the West Bank has sparked a mild economic boom there, sapping the urgency of Palestinian demands, at least for now. Several Palestinian efforts to mount mass marches on settlements or the security barrier have fizzled, and even the vaunted Fatah-Hamas unity pact, which was supposed to create a common front to press for independence, is foundering.

The prime minister continues to insist that he is committed to a two-state peace deal with the Palestinians. He has offered some little-noticed concessions in recent days, including scaled-back demands on future Israeli presence along the Jordan River. “Peace is possible,” he told the conference delegates. “It’s within reach.” Lowering his voice in mock deference, he added, “I know some people don’t think I believe it,” a reference to a recent flap over his deeply pessimistic comments to popular writer-filmmaker Etgar Keret.

In fact, almost nobody believes him. Not his opponents on the left, who claim that his stated positions — especially his demand that the Palestinians recognize Israel “as a Jewish state” — make new peace talks all but impossible. Not his hard-line allies, who remain in his coalition out of faith that there won’t be a West Bank withdrawal. Not the Obama administration, which resents his very public undercutting of the president during his Washington visit in May.

Most striking, mistrust of Netanyahu is growing to unprecedented proportions in the security establishment, which traditionally avoids politics and keeps its views to itself. The prime minister had a very public feud last year with the outgoing military chief of staff, Lt. Gen. Gabi Ashkenazi, who was known to be an opponent of military action against Iran. Since then a host of ex-commanders — including most of the living ex-chiefs of the military and intelligence services — have come out as public critics of Netanyahu’s policies, on both Iran and the Palestinians.

Peres’s presidential conference, his third since 2008, is seen as a showcase for the resurgent dovish sentiment. Speakers tilt overwhelmingly to the left, at least on diplomatic and security issues — “about a six-to-one tilt,” an American Orthodox delegate complained to me.

The opening plenary featured Quartet negotiator and former British Prime Minister Tony Blair, left-wing French intellectual Bernard-Henri Levy and arch-dove Israeli novelist Amos Oz. A session on “global challenges” was keynoted by opposition Kadima leader Tzipi Livni; no similar platform was offered to a leader from the right. Jeremy Ben-Ami of J-Street was featured on not one but two panels, despite objections from Knesset rightists that he was invited at all. A panel discussion on “the Jewish dimensions of the peace process” featured settler leader Emuna Elon alongside four high-profile liberals.

Peres allies say the conference’s tilt is no more than an appropriate counter-balance to the better-known Herzliya Conference, a prestigious annual security forum dominated by Israeli hawks and American neoconservatives.

None of these rumblings appear to give Netanyahu pause. For all his vows of flexibility, new West Bank settlement construction plans are moving smoothly through the system, including a plan for five new locations in the Jordan Valley, a key spot of contention where Netanyahu recently hinted at flexibility (more about that in my weekly column on the editorial page). Several pieces of legislation have moved through the Knesset to hobble liberal peace and human rights groups, including a bill that bars them from employing conscientious objectors doing national service in place of army duty.

Some of the measures are extremely pointed. Just before Peres’s conference began, retired Mossad intelligence director Meir Dagan, now a Netanyahu critic, was very publicly ordered to return his diplomatic passport, a perk of his Mossad job that he had received permission to keep for several months for overseas speaking engagements. The same weekend, the Cabinet voted to remove approval of settlement construction from Defense Minister Ehud Barak, whom settler leaders accuse of tying their hands, and moving it into the prime minister’s office. Barak was out of the country at the time and had asked that the vote be postponed until he could participate, but Netanyahu refused.

Critics say the explosion will come — if not sooner, then later. The United Nations will take some sort of step in the fall, they say, even it is not formal Palestinian statehood. Mounting boycott efforts are almost sure to follow, and perhaps an appeal to the international criminal court, once the Palestinians have gained some sort of formal standing to bring cases. The apparent quiet weakens the doves’ already-low credibility, neutering even as respected a security voice as Dagan’s.

“Israelis don’t make decisions until they’re hit over the head with a hammer,” former Shin Bet director Carmi Gillon told me. “And it will happen. I have never been this afraid.”