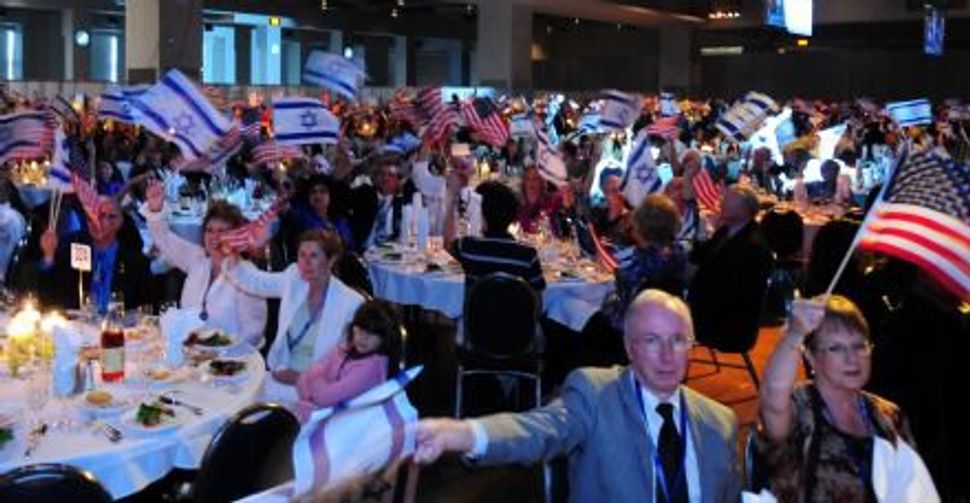 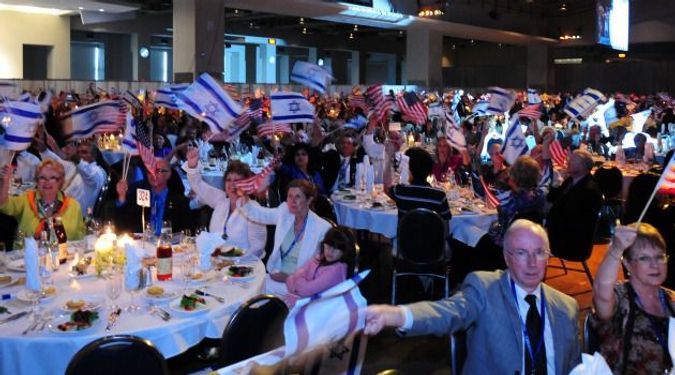 Once a novelty, the shofar-blowing, hora-dancing Christian evangelicals are now an integral part of the pro-Israel advocacy scene.

At its 5,000-strong national conference in Washington, Christians United for Israel, the large Christian-Zionist movement, made clear it is stepping up its activity on the two issues that now top the pro-Israel agenda: fighting efforts to delegitimize Israel, and working on college campuses to counter anti-Israel activity.

With 700,000 supporters, CUFI is the largest pro-Israel organization in America. And while the views expressed by its leaders in their Washington gathering indicate that CUFI is still distinctly apart from the mainstream pro-Israel community, it is being warmly embraced by Israeli and American Jewish leaders alike.

CUFI’s acceptance as an essential part of the pro-Israel community was palpable in its three-day conference, which ended on July 20. The signs were abundant, ranging from the live satellite greeting by Israeli Prime Minister Benjamin Netanyahu, a gesture many Jewish groups still fight to obtain, to the noted presence of top officials from the American Israel Public Affairs Committee. Malcolm Hoenlein, executive vice chairman of the Conference of Presidents of Major American Jewish Organizations, offered enthusiastic support for the group and its leader, the Rev. John Hagee.

Hoenlein spoke of the Jewish community’s efforts to counter delegitimization of Israel by setting up a leadership action network that has enrolled 750,000 participants in the past few months. The members of CUFI, he added, now double the number of activists taking a stand on Israel’s behalf. “You will be remembered in history, and the detractors will be forgotten,” Hoenlein promised. “Just think about your grandchildren. By standing up for the right thing, standing up for Israel, they will praise you.”

Beyond taking on the issue of delegitimization, CUFI also highlighted during its conference the fight for the hearts and minds of students on campuses in the United States, another theme that has been at the forefront of pro-Israel activity in recent years. The group held a special fundraiser to support its college initiative and honored student activists working on campus. The focus on campus activity mirrors similar initiatives launched by Jewish groups under the umbrella of the Israel on Campus Coalition.

At a time when Jewish groups are becoming increasingly critical of the Israeli government, whether due to its foreign policy or because of legislative actions seen as running counter to the nation’s democratic values, CUFI has emerged as an almost automatic supporter of Israel, a trusted base capable of providing masses to advocate for Israeli policy.

Pro-Israel activists point to CUFI’s potential reservoir of 50 million to 70 million evangelical Americans as Israel’s best chance to ensure lasting support within the United States, but scholar Marshall Breger, a Catholic University law professor who is active on interfaith dialogue issues, warned against misunderstanding the Christian evangelical world. “It is false to believe that Christian Zionists are the same as evangelical Christians,” he said, explaining that while Zionist evangelicals are driven solely by support for Israel, the broader evangelical community, though favorable toward Israel, is focused on the need for reconciliation and on the idea that “the stronger reach out to the weaker.”

As part of its attempts to enter the pro-Israel mainstream, CUFI has become more careful in stating its positions on issues relating to the Middle East conflict. Hagee, while making clear he believes that the Jewish people are not occupiers in the Land of Israel, as suggested by what he referred to as “the liberal media,” was cautious not to speak out against a two-state solution. “America should never pressure Israel to give up land for peace. Not to anyone, ever,” Hagee said, to the applause of an excited crowd. But CUFI’s press people were quick to approach reporters and make sure they understood the subtlety in Hagee’s message: The organization was against pressure, not against compromising on land.

But in the realm of domestic politics, CUFI’s leadership remains strongly on the conservative side. Hagee had no qualms about his views of the current administration. “The truth that many Americans do not want to face is, President Obama is not pro-Israel,” Hagee said in his speech at the conference’s main event, the Night to Honor Israel. Gary Bauer, president of American Values and a member of CUFI’s executive board, asked the audience a rhetorical question: “Who will defend Jerusalem? The State Department?” He immediately replied, “No.” Hagee and Bauer’s criticism of the Obama administration was merely a warm-up act for the conference’s main star and CUFI’s newest member: Glenn Beck. The TV and radio pundit, who has taken his anti-Obama message out to the streets, is now preparing for his planned rally in Jerusalem, scheduled for late August.

Beck, invoking the memory of the Holocaust time and again, and tearing up when reaching the emotional peaks of his presentation, made no mention of the Obama administration’s attitude toward Israel. He did, however, elaborate on his views about increased government involvement in daily life.

“No one can protect your rights better than you,” Beck said as he referred to the struggles of the Jewish people throughout history. “To rely on others is to ensure economic slavery at best, and death camps at worst.”

But what brought the crowd to its feet for a lengthy standing ovation, which included the waving of the Israeli and American flags and the blowing of the shofar, was Beck’s pledge to stand by Israel at any cost. “Today I declare: Count me a Jew, and come for me first,” he told the cheering crowd. “Let us declare: I am a Jew.”