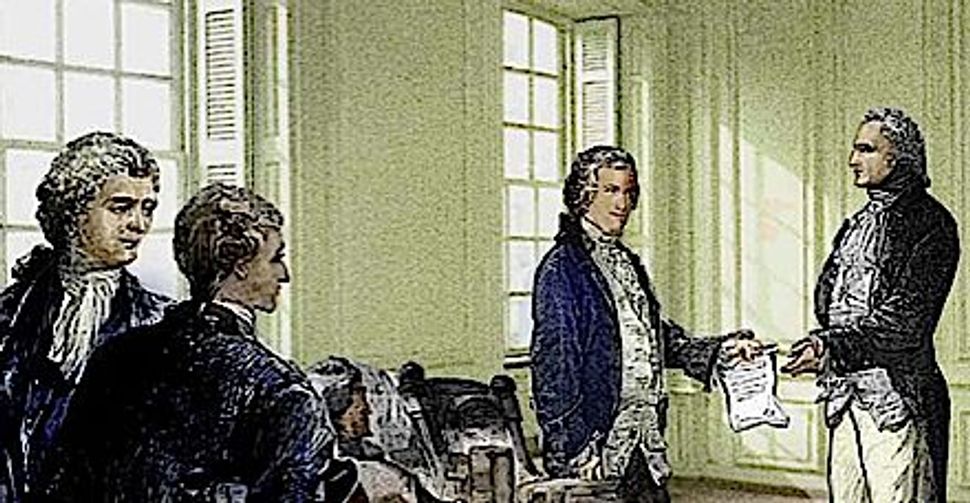 The B’nai B’rith Klutznick National Jewish Museum was once one of the country’s foremost Jewish institutions. Just 15 years ago, about 100,000 people per year flocked to the Klutznick, which sprawled across the first and second floors of B’nai B’rith’s flagship headquarters, on Rhode Island Avenue in Washington.

But B’nai B’rith’s fading fortunes forced it to sell the building in 2002. And since the organization downsized to the seventh floor of an office building on Avenue K, almost all of the Klutznick’s artifacts, including paintings, Torah binders, ceremonial documents, books, shofars and Sabbath lamps, were boxed up and shipped off to a climate-controlled fine arts storage facility in Maryland.

Among them was the Letter from George Washington to the Hebrew Congregation at Newport, Rhode Island, written in 1790. As the Forward has cataloged in recent months, the letter — widely considered to be one of the most important documents related to religious tolerance in American history — has been hidden from public view for almost a decade.

While the letter is important, it is just one of 1,800 items that contributed to making the Klutznick Museum a major draw for Jewish and non-Jewish visitors. Instead of being shared with the world — as many of its donors no doubt expected it to be — the collection has been locked away in a warehouse.

B’nai B’rith executives declined to be interviewed for this story. But in previous months, Sharon Bender, a B’nai B’rith spokeswoman, insisted that technically, the museum is still open. “We currently have about 79 pieces from the collection on display throughout our offices,” Bender said in an e-mail August 9. To see them, people just have to make an appointment.

According to B’nai B’rith’s most recent tax filing, the museum is still active. B’nai B’rith claimed that the museum “enhances the worldwide understanding of the Jewish people by preserving, fostering, and promoting Jewish culture and contributions through distinctive collections, relevant programming, and local and international outreach.”

Despite the museum’s assurances that one or two people, on average, visit the collection each week, programming ceased long ago, and the museum, to all intents and purposes, is on life support.

Robert Klutznick, whose father’s name adorns the museum, said in a telephone interview from Colorado that if he visited Washington today, he “would not seek out the museum for a Jewish experience.”

“It cannot be considered a functioning institution when it’s in people’s offices,” said Vivian Mann, director of the master’s program in Jewish art and visual culture at the graduate school of the Jewish Theological Seminary. “I was chair of Judaica at the Jewish Museum, the largest Jewish museum in this country, and what you just told me about access is news to me.”

The Klutznick started out as a small collection in the Phillip and Ethel Klutznick Exhibit Hall on the ground floor of B’nai B’rith’s brand-new headquarters in 1957.

Washington’s letter to the Jews of Newport, which was loaned to the museum by the Morris Morgenstern Foundation about 50 years ago, remains one of the Klutznick’s earliest and best-known treasures.

But the Klutznick really burst onto the Jewish museum scene after Cleveland philanthropists Joseph and Olyn Horwitz donated their extensive Judaica collection to B’nai B’rith during the 1970s.

The gift, which included a number of rare Italian artifacts, such as a 16th-century Torah wrapper and an 18th-century silk folder for a ketubah, a marriage contract, catapulted the museum into the ranks of major Jewish cultural institutions.

Since B’nai B’rith was primarily a social welfare organization, it needed a specialist to care for and display such an important collection. So it hired its first museum expert, Anna Cohn, from the Sterling and Francine Clark Art Institute, in Williamstown, Mass., in 1976.

As the Klutznick Museum’s first director, Cohn said it took years to prepare, present and interpret the Horwitz collection, which she inherited “well cared for” and still in its original boxes when she arrived at the museum.

“I loved that collection,” said Cohn, now director of the Smithsonian Institution Traveling Exhibition Service. “It was beautiful.”

Cohn said that during her tenure, which lasted until the early 1980s, there was a “harmonious relationship” between the museum and B’nai B’rith. She also said that she parted company with the museum on very good terms.

But Ori Soltes, who took over as museum director in 1991, said that by the time he appeared at Rhode Island Avenue, the tone had changed.

Soltes said the collection was in a very poor state. Display cases were “filthy and needed cleaning,” and basement storage facilities were “chaotic and crowded.”

“It was extremely difficult to know what was what and what was where,” Soltes said.

Soltes blamed some of the disarray on the management of the museum. But he said the main stumbling block was that B’nai B’rith was first and foremost a social welfare organization. He said it was not set up as a cultural organization, nor was it “overly sympathetic to a museum.”

“Over time, as B’nai B’rith shrank and became less dynamic and relevant to the American Jewish community,” Soltes said. “It became decreasingly interested in offering substantial support to the museum.”

Soltes said that prior to his tenure, the museum relied on B’nai B’rith for almost its entire budget. By the time he left, in 1998, the museum was raising about $450,000 annually on its own, around 90% of its budget.

Soltes sought to boost visitor numbers by staging more exhibitions and by starting a citywide competition for public and private school students to create artworks or write essays about the Washington letter.

Annual visitors numbered about 40,000 during the early 1990s and swelled to 100,000 by the end of the decade, Soltes said. Museum membership increased to more than 1,000 people from about 100. As B’nai B’rith continued to decline, the museum expanded, moving to the second floor of the building.

But instead of welcoming the museum’s success, Soltes said, B’nai B’rith’s leaders resented it.

“By that point, its lack of vision at the leadership level was so profound that instead of feeling pride in the museum growing, they felt threatened by it,” Soltes said.

Janice Blumberg, who chaired the B’nai B’rith committee that ran the museum, said that it was around this time that a group of donors stepped forward with the idea of spinning off the museum as an independent entity. “But B’nai B’rith would not release us,” Blumberg said.

Instead, Soltes was forced out in 1998. Within months, Blumberg said, most of the board members, including the main fundraisers for the museum, stepped down, too.

Blumberg, whose husband, David Blumberg, was international president of B’nai B’rith during the 1970s, said that at the time of Soltes’s dismissal, board members did not want to draw attention to the debacle, but bitterness remained. “We thought, we’ll just swallow our venom and let it go,” she said, “but there comes a time when it should all come out.”

When B’nai B’rith moved to its new headquarters, it promised that although many artifacts were in storage, the museum would remain open. It even set aside a small gallery space in its office to exhibit items.

Diana Altman said, however, that a year after she took over as Klutznick director, in 2003, B’nai B’rith shut down the gallery because it wanted to sublet the area to another organization.

“A number of the agreements specified that the artifacts needed to be on display,” Altman said, “so I made the case that we needed to take that into account or contact the donors or the heirs.” But nothing was done.

Instead, Altman said, those artworks that were kept in the offices were treated with little respect.

“I had to write a letter to [B’nai B’rith International Associate Executive Vice President] Mark Olshan not to hang his ID badge off an important statue in the collection,” Altman said.

Another time, Altman said she was informed at the last minute that there would be construction work near the office and was told to “get your artifacts off the wall by 5 o’clock today.”

“I went over there, and there was plaster falling on these artworks,” Altman said. “It was horrifying.”

Altman said she also became concerned with the past care of artifacts. Specifically, she discovered among B’nai B’rith paperwork that in addition to the Washington letter, the Morris Morgenstern Foundation had loaned four items to B’nai B’rith. One of those, a Spanish Bible, had been lost sometime between 1957 and 1983, when Linda Altshuler, then director of the Klutznick, had to advise the foundation to make an insurance claim. Altshuler said she had no recollection of such an event.

In addition, Altman said that Richard Morgenstern, grandson of the eponymous founder of the Morgenstern Foundation, was “very angry” with B’nai B’rith that the Washington letter had to be put into storage. She said that Morgenstern “felt the American people were being denied.” Morgenstern did not respond to an interview request.

While the Washington letter, and the majority of the collection, languished in storage, Altman said B’nai B’rith entered into negotiations with a number of institutions, including the George Washington University and the University of Maryland, to find a new home for the artifacts. But she said the overtures were “half-hearted and unrealistic.”

“It was not a serious effort,” she said.

In 2008, B’nai B’rith International President Moishe Smith and Executive Vice President Daniel Mariaschin wrote an op-ed in the Washington Jewish Week, saying that their organization continued to search for a home for the museum. They called on the “support and generosity of the Washington Jewish community and of the national Jewish community” to help fund a new “National Jewish Museum in Washington.” They even trademarked the name.

When asked to comment on those plans, Bender said in an e-mail, “B’nai B’rith is in talks with various potential partners to create an enduring, long-term programmatic partnership for the museum collection, and we’d be happy to talk with you when our plans are more firmly set.”

Blumberg and Soltes, meanwhile, are among nine trustees of a proposed new museum in Washington, the National Museum of the Jewish People. “We have proposed to B’nai B’rith as recently as two months ago that if this comes to fruition, we would love to discuss with them the possibility of including their collection in the B’nai B’rith wing,” Soltes said.

Joanne Kauvar, executive director of the Council of American Jewish Museums, agreed. She said that the most important question now is whether B’nai B’rith’s board is serious about addressing potential ways of bringing its collection back into the public realm.

“One would simply hope that the people among the B’nai B’rith leadership acknowledge its value and take seriously the responsibility that accompanies custodianship of the collection,” Kauvar said.