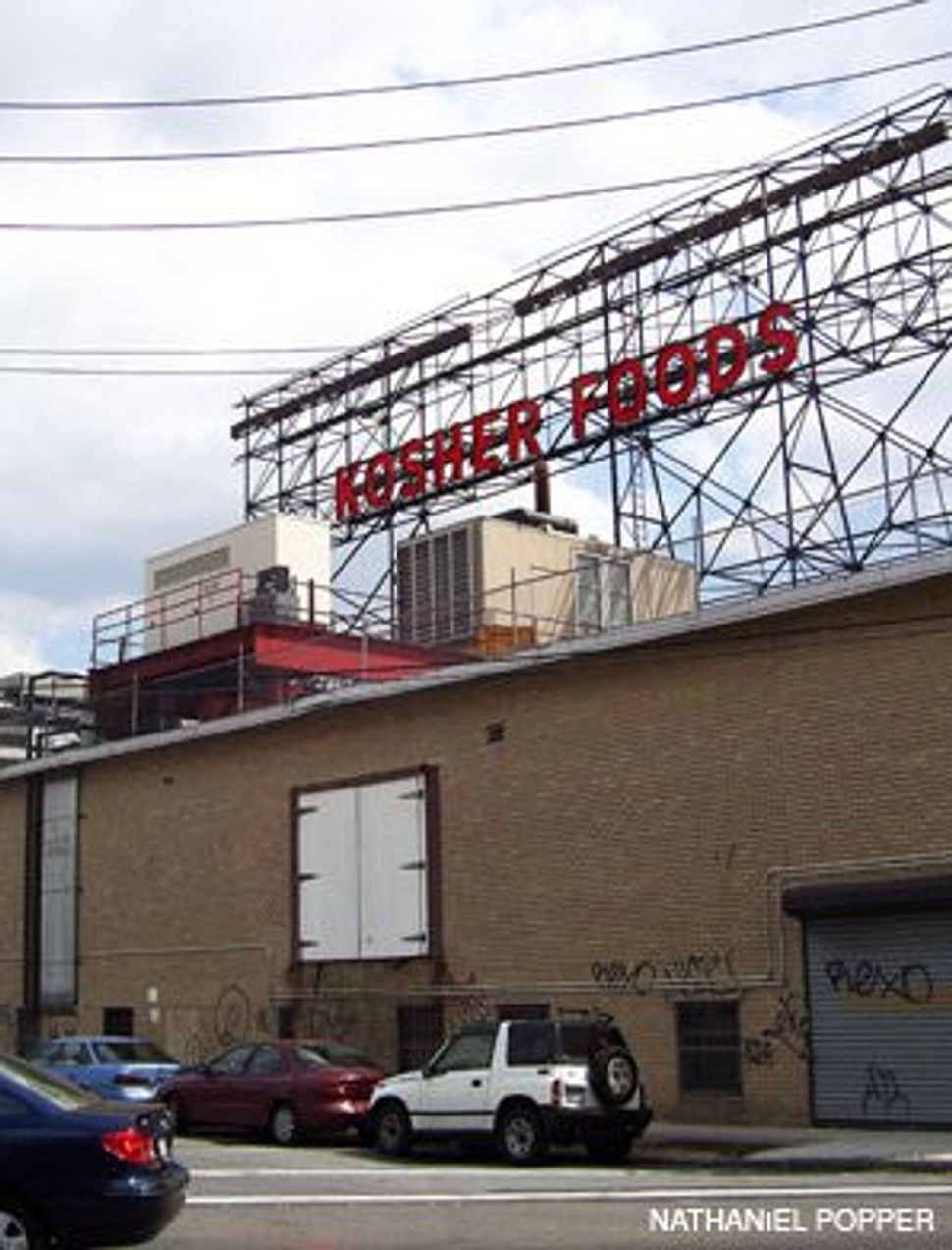 Luis Molina lost part of his middle finger to a 2,000-pound food mixer while working at what is now the country’s largest producer of kosher beef, Alle Processing. 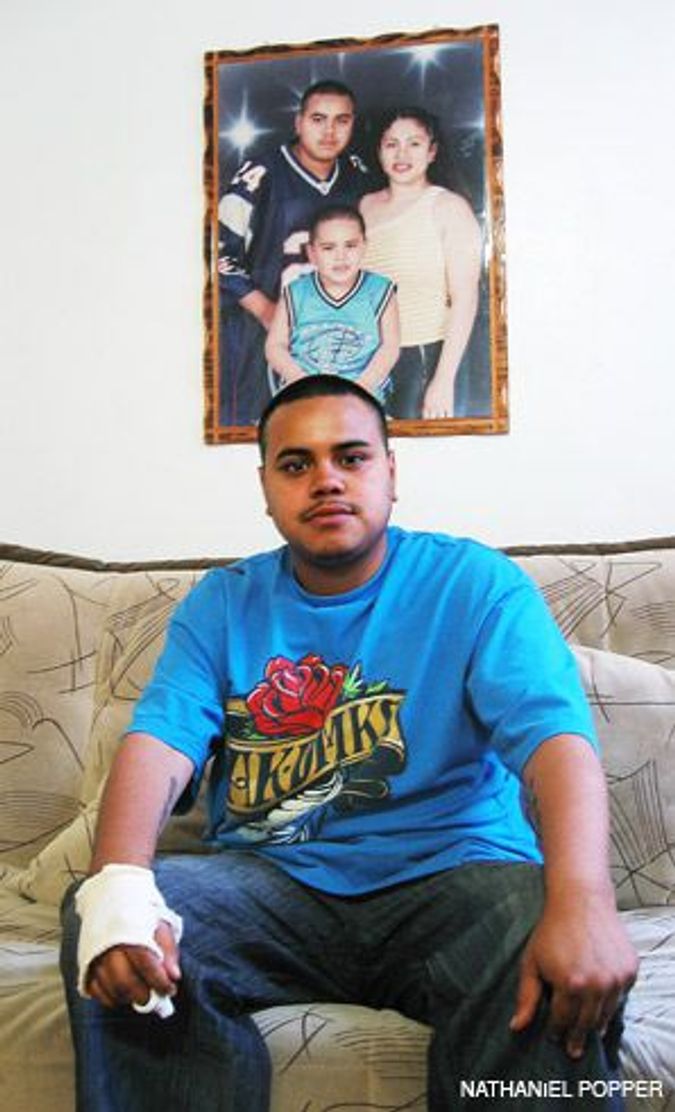 CUT TWICE: Luis Molina lost a portion of his middle finger in a work accident at Alle Processing, which, he said, then suspended his pay. 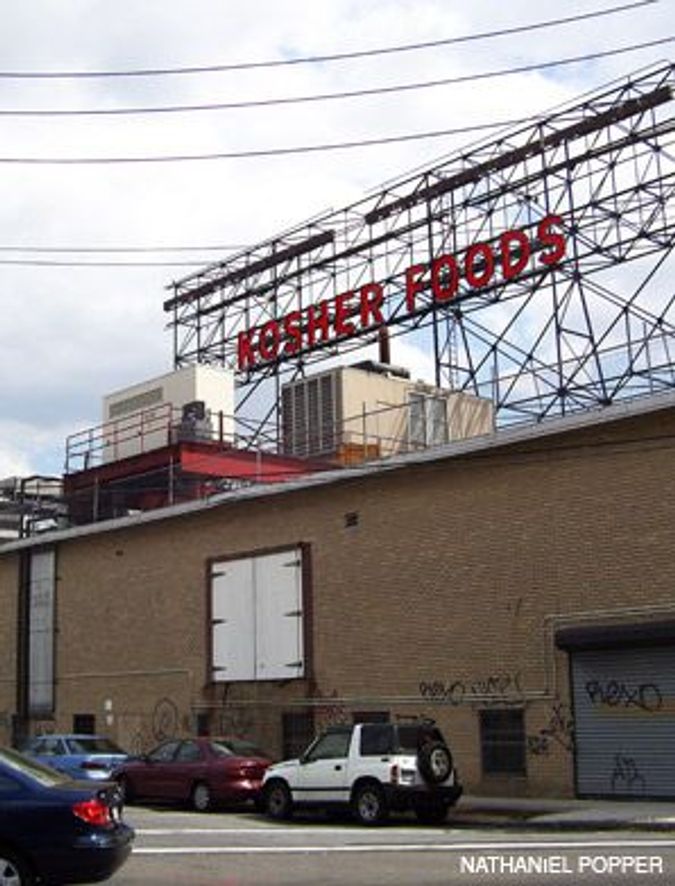 Molina, 23, said that the accident, which happened when a fellow employee flipped a power switch, was not a surprise, given that he and others on his team had not received safety training. But he also said that what’s happened since then has added insult to injury.

The company, which operates a plant in Queens, stopped his pay the same hour he got injured, he said, leaving him in the lurch financially. Then, he continued, when he went into the office to talk to his supervisor, he was told that when he returned to work he would be suspended for four weeks without pay, because he used the machine improperly. After three years with the company, Molina said even this was not unexpected.

“They love suspending people there for any little thing,” Molina said while recuperating at his home in Brooklyn as his two children ran around him. “Two weeks, three weeks, they think it’s a joke ’cause they got that little power.”

The company did not respond to numerous phone messages and declined to meet when the Forward visited the plant.

For the past two years, all eyes have been on the working conditions at the nation’s largest producer of kosher beef and chicken — Agriprocessors — and the scrutiny has grown more intense since May, when Agriprocessors’ Iowa slaughterhouse was the subject of a massive immigration raid. Even before the raid, the ethics behind kosher food production had become a topic of national debate as some rabbis argued that the treatment of workers in the plants should be considered along with the methods of slaughter prescribed by Jewish law (see related story).

Since the Agriprocessors raid, industry experts say, Alle has become the biggest producer of kosher beef. In several interviews, Alle workers made complaints about many of the same issues that have plagued Agriprocessors: low pay, unhappy relations with management, and a lack of health benefits and safety training.

“I’ve worked a lot of jobs,” said Jonathan King, a five-year veteran at Alle who was outside eating his lunch with co-workers recently. “But this is the worst place in the world to work. They don’t care nothing about us. As long as the stuff gets made, that’s all they care about.”

At both Agriprocessors and Alle, the worker complaints have surfaced in the midst of an effort by the United Food and Commercial Workers to organize the employees. No vote is planned yet at Alle.

Dave Young, a regional organizing director for UFCW Local 342, has worked on campaigns with both companies. He placed Alle right behind Agriprocessors in problems with labor relations.

“Do I think they treat the people as bad as Agri? No,” Young said. “Do I think they are anywhere close to what they should be? Absolutely not. It’s very similar to Agri in that they don’t have paid vacation or health, and there’s lots of favoritism.”

Perhaps the most marked similarities between both plants are issues that have arisen because of the presence of workers that other employees say are undocumented immigrants. Kimborn Morris, who was fired by Alle earlier this summer, said that there is a clear division between legal and illegal immigrants.

“They would always tell me in advance if I had to do overtime,” Morris said. “If my name was Garcia, they’d say, ‘You can’t leave — you gotta finish that.’”

“We Americans — we get one version,” King said. “They, they get the version that if they talk out here, they’ll call the immigration office — have them deported.”

Susanne, an undocumented immigrant from Ecuador who worked at Alle until July, confirmed King’s account and said she was aware that her lack of citizenship gave her a handicap with the management.

“Those who are citizens don’t get treated the same way,” said Susanne, who did not give her last name because of her legal status.

Alle Processing employs nearly 300 people at its plant in the Maspeth neighborhood, which sits just off the Long Island Expressway with an enormous sign announcing “Kosher Foods.” The company does not own a slaughterhouse; instead, meat is shipped in from independent slaughterhouses. The workers in Queens are responsible for processing kosher products for a wide array of subsidiary companies, including the Meal Mart restaurant chain, Mon Cuisine and NY Kosher Deli. The company is a leading producer of institutional kosher food and has contracts with the Federal Bureau of Prisons and a number of airlines.

The Weinstock family founded Alle in 1954, and today the company’s president is Albert Weinstock.

Industry experts say the company was founded in response to a request from the top rabbi, or rebbe, of the Satmar Hasidic sect, who wanted a reliable supply of glatt kosher meat for his community. Alle brands generally have a good reputation among kosher certifiers.

“Anytime I have issues, they address it immediately and deal with it,” said Rabbi Yudel Shain, head of the Kosher Consumers Union.

The plant has been around long enough that it has confronted labor unions previously. In 1995, newspapers reported that workers voted to join the Union of Needletrades, Industrial and Textile Employees, but it appears that the two sides never signed a contract.

There are currently two efforts to organize the workers. The International Brotherhood of Teamsters is in the midst of a campaign to organize the dozen or so truckers who work for Alle. They voted on August 28, and the Teamsters claim to have won 7-5. Another four workers voted against the union, but the Teamsters say that these were employees who were brought in specifically to spoil the election. The union has filed a challenge to the vote with the National Labor Relations Board. Before the vote, truckers say, company managers held meetings twice a week, pushing the workers not to join the union.

Companies are permitted to speak with workers about impending union votes, but they are generally not allowed to threaten workers for interacting with unions. The UFCW, which is trying to organize the hundreds of employees inside the plant, submitted a charge to the NLRB, alleging that Morris, a 23-year-old who was responsible for the Frank-O-Matic machine in the plant, was fired because of his work on behalf of the union. That charge was denied by the company and is being investigated. Morris told the Forward that the fears he heard among immigrant workers have made him skeptical of the union’s chances.

“A lot of people don’t want the union, ’cause they got threatened that they’ll be deported,” Morris said.

In the past, the U.S. Supreme Court has protected the right of undocumented immigrants to join labor unions.

One of the citizens who is in favor of a union is Darnell Pierre, 22, who has worked at the plant for nearly a year, most recently making packaged meals. Like others interviewed, he said that when he was hired he was promised a raise after 90 days and another after six months. Nearly a year later, Pierre said he is still earning his starting wage of $7.15 an hour, the minimum wage in New York State.

For Pierre, an equally pressing issue has been the capricious nature with which he says he has been treated. He bikes to work from the Crown Heights neighborhood of Brooklyn to begin work each morning at 6:30, but he rarely knows when his shift will end.

“I get off whatever time they tell me to leave,” Pierre told the Forward, speaking outside the company gates. “Some days I come in there at 6 in the morning and don’t leave until 9 o’clock at night.”

He would feel better about that if he were getting paid for sick days, or for all the Jewish holidays he has to take off, or if he received health care benefits.

“I never had a job where I had so many problems,” Pierre said.

For a look at the Forward’s ongoing coverage of the turmoil in the kosher industry, click here.