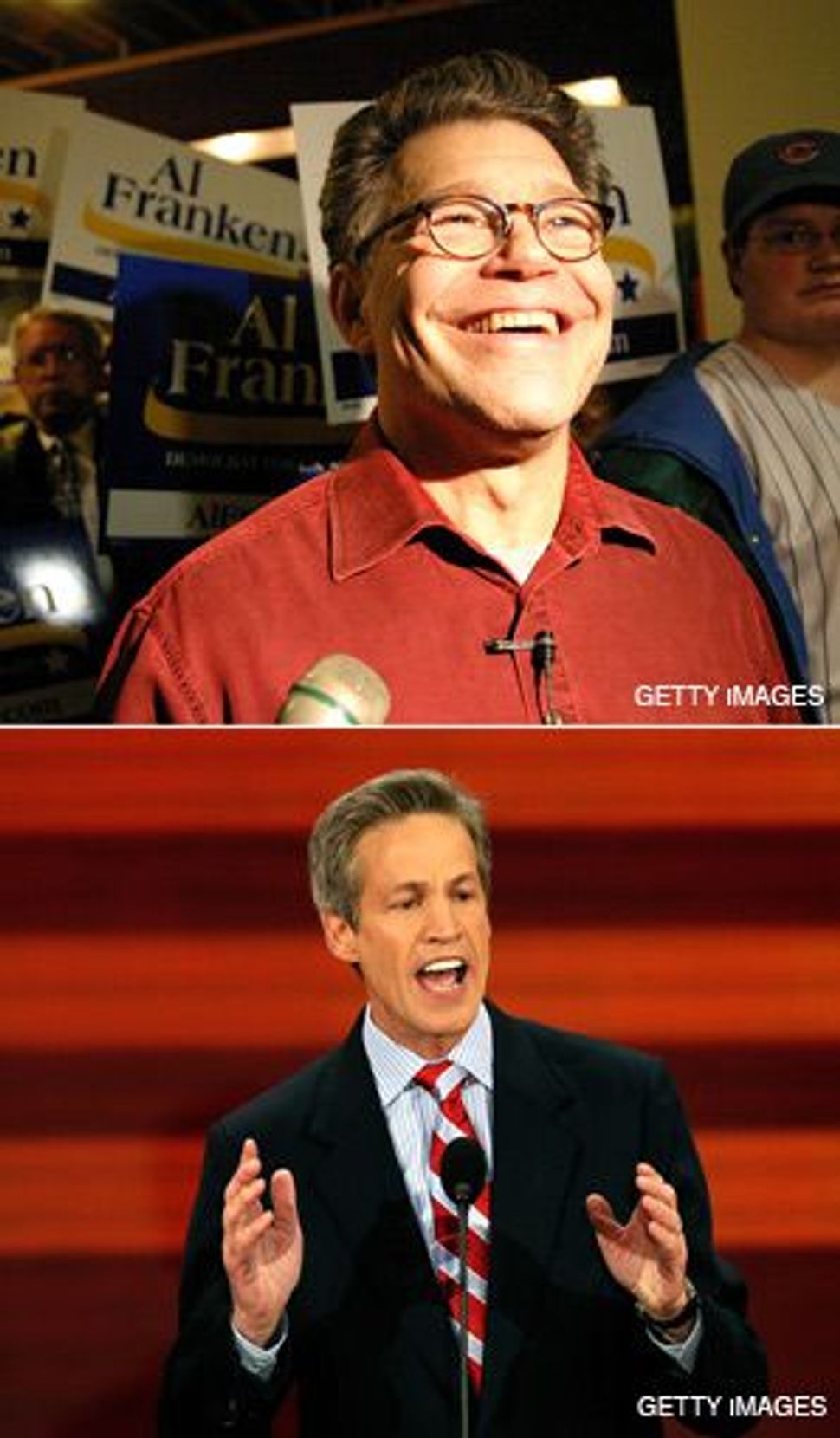 MEMBERS OF THE TRIBE: Democrat Al Franken (top) is challenging Republican incumbent Norm Coleman (bottom) for a seat held by Jews since the 1980s.

Louis Park, Minn. — The last time that a non-Jewish lawmaker was elected to the Senate seat currently held by Republican Norm Coleman the president of the United States was Jimmy Carter. 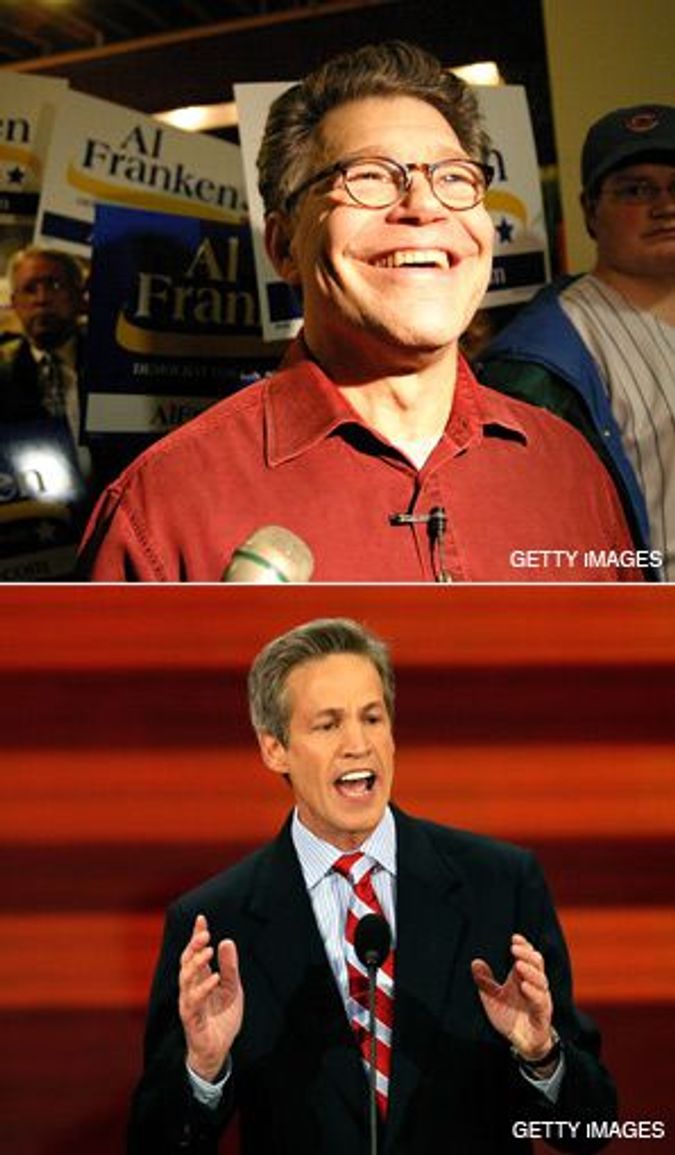 MEMBERS OF THE TRIBE: Democrat Al Franken (top) is challenging Republican incumbent Norm Coleman (bottom) for a seat held by Jews since the 1980s.

Despite a Jewish population estimated at less than 1% of the state’s total — and a history of intolerance that, in 1946, led Carey McWilliams, editor of The Nation, to call Minneapolis “the capitol of anti-Semitism in the United States” — Minnesota will continue what has become an odd tradition of electing Jewish senators.

The September 9 primary locked in place the already heated campaign between Coleman and Al Franken, the comedian, liberal activist turned radio personality and now Democratic nominee. The race represents the third consecutive election for the seat that will pit two Jewish candidates against each other.

Why Minnesota — with a mere 50,000 Jews at most, a sturdy German and Lutheran heritage, and native sons like Garrison Keillor and Jesse Ventura — would become home to what’s known as the Jewish Senate seat can be a touchy subject.

“It’s no more odd than Wisconsin,” protested former Senator Rudy Boschwitz, referring to the neighboring state which has two Jewish senators. Boschwitz was the first Jew elected to the Minnesota seat that was previously held by Walter Mondale and Hubert Humphrey.

True, there are fewer than 30,000 Jews in Wisconsin, clustered around Milwaukee and Madison, and they represent only about .5% of the state’s population. But the Badger State didn’t elect its first Jewish senator, Herb Kohl, until 1989 — years after Minnesota.

Historians, political scientists and other observers of Minnesota are equally at a loss to explain why Jews, who couldn’t even join the statewide automobile association until 1953, have figured so prominently in statewide politics over the past 30 years. “I don’t think there’s a logical explanation for it,” Coleman said. Religion is generally not an issue in these Senate races, and this year is no exception.

“Some are trying to make Jewish issues,” said retired University of Minnesota historian Hyman Berman, author of the book “Jews in Minnesota.” Berman said that Democrats have tried to cast Coleman as “Bush lite,” while Republicans have argued that Franken is less supportive of Israel.

Franken and his supporters have disputed the charge that he is not as strong on Israel. But Israel is hardly a top-tier issue, and neither candidate is emphasizing his faith.

That’s not to say there aren’t Jewish issues — and sensitivities — for Jewish voters to consider.

At Fishman’s Kosher Delicatessen and Bakery in St. Louis Park, not far from where Franken grew up, university student Jessica Himmelman worries that delinquent tax issues that nearly sank Franken’s campaign last spring and summer will feed into stereotypes of Jews as greedy.

“That’s a stereotype that people have,” Himmelman said on a recent Friday afternoon. “As a Jewish person in the public eye, you have to be really careful about what you display, and you have to be the best person you can be and especially an example for Jewish people.”

Stewart Fishman, owner of the restaurant and butcher shop — which boasts of being Minnesota’s only full-service kosher food store — is equally troubled by the message Coleman sends by marrying a non-Jew.

“From an observant Jew’s point of view, it’s a shame,” he said. “Here’s a Jewish guy who is a role model. That’s not the role model we’re looking for, at least not from that perspective.”

But Minnesotans, Jews and non-Jews alike, can also be an open-minded bunch. And that helps explain, at least in part, why Jews seem to have a lock on this Senate seat. Minnesotans have not only voted for but have embraced liberals such as the late senator Paul Wellstone, conservatives like Coleman and political oddities such as Ventura.

“We’re willing to give people a shot,” said state House of Representatives Speaker Margaret Anderson Kelliher after attending a recent rally with Franken and other Democrats. “I think it has less to do with religion than tolerance and open-mindedness.”

Baby boomers like Kelliher, Franken and Coleman also grew up in a different atmosphere than their parents. While nobody interviewed suggested that prejudice has entirely disappeared, Carey McWilliams’s assessment and subsequent examinations of antisemitism in the state shocked many Minnesotans. Humphrey, then the mayor of Minneapolis, along with the governor pushed legislation to remove covenants that restricted where Jews could live, and allowed them to teach, serve in government and work in banking. Humphrey would go on to become a champion of civil rights in the U.S. Senate.

Whether a Jewish Democrat will be sent to Washington in November is another question. The latest polls find the race statistically tied.

“I’m going to take Norm Coleman,” Franken told supporters gathered recently in the parking lot of a library in Woodbury, a suburb east of St. Paul. At that campaign rally and others, he weaved smoothly between stand-up bits he might use to mock Republicans on his Air America radio show and talking about the need for investment in infrastructure, education, and research and development.

And Franken has won over many key Democratic and community leaders, including Sam Kaplan, an influential member of the Jewish community and major fundraiser who chaired Wellstone’s campaigns. “He’s a neophyte in terms of being a candidate, but he’s a very, very skilled guy,” said Kaplan, who along with comedian and television star Larry David hosted a recent Franken fundraiser.

But Coleman’s image as a centrist, combined with the success of bringing the Republican National Convention to the Twin Cities earlier this month, gives him a following. “I’ve got a record of working with people, and I’m running against a guy whose experience is ripping apart people he disagrees with,” Coleman told the Forward.

“I’ve given my life to public service,” he said — including, he hastened to add, serving as a leader of the Jewish National Fund.