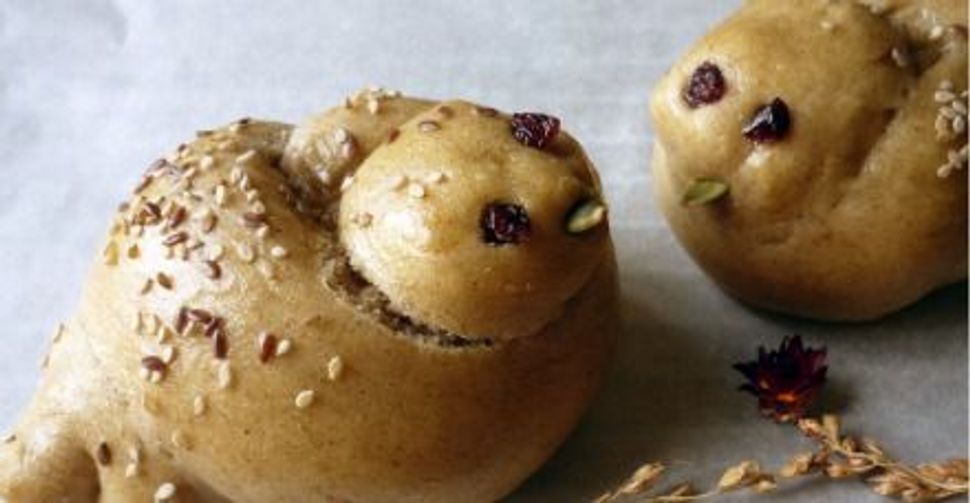 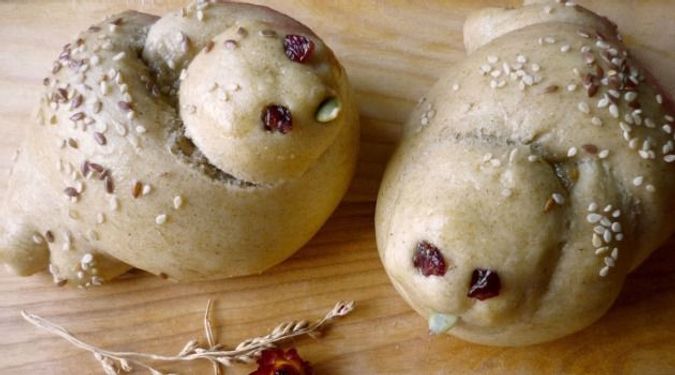 I don’t remember most of what my family ate on Rosh Hashanah when I was growing up. We likely had a platter of brisket and maybe a steaming tureen of tzimmes. There was probably a bottle of Martinelli’s sparkling apple cider on the table to be festive — but honestly, the details are fuzzy. What I do remember, however, is the challah my mom would bring home from the supermarket bakery: a fat, doughy spiral, brimming with jammy raisins. I would pull hefty chunks from the middle (bad challah etiquette, I know), dipping them into pools of golden honey and marveling at the rare opportunity to eat dessert for dinner. More than chicken soup, more than apples and honey even, that challah was my indication that the New Year had arrived.

Like most Jewish holidays, Rosh Hashanah is filled with rich food symbolism. The round challah on my family’s dinner table, for example, represented the cyclical nature of life, while the raisins evoked our wishes for a sweet year ahead. And while my family always kept things simple with the traditional apples and honey, some families (particularly Sephardic and Mizrahi) hold elaborate food seders at Rosh Hashanah dinner. Throughout the meal they eat particular foods — like leeks, beets, squash, pomegranate seeds and fish heads — ascribing to them metaphorical significance and blessings for the coming year.

More recently I learned that when it comes to challah, the rounded shape I was accustomed to eating on Rosh Hashanah is just one of several ways to imbue added meaning. Traditionally, some Ashkenazim formed other edible symbols out of the dough — things like crowns, which represented God’s majesty; ladders (a shape also commonly eaten before the Yom Kippur fast) to represent Moses’ ascent on Mount Sinai and our collective spiritual ascent throughout the holiday season; and, my favorite, birds.

According to “Joan Nathan’s Jewish Holiday Cookbook” (Schocken, 2004), bird-shaped challah rolls, called feygelekh (Yiddish for “little bird”) symbolized “the protection of God’s people as stated in Isaiah 31:5: ‘As birds hovering [over their fledglings], so will the Lord of hosts protect Jerusalem.’” Another interpretation, offered by Linda Burghardt in “Jewish Holiday Traditions” (Citadel, 2001) is that birds are a traditional symbol of mercy, making them the perfect emblem during a season of judgment. The same rolls served before Yom Kippur, writes Gil Marks in “The Encyclopedia of Jewish Food” (Wiley, 2010), represented the eater’s hope that “our sins should fly away and…. our prayers soar to the heavens.” In addition to their symbolic nature, it’s easy to imagine the delight of the children at the table when the challah cover is lifted to reveal a flock of edible birds!

Feygele challah originated, like many of these shapes, in 18th century Ukraine. The country was once called the breadbasket of Europe because its fertile, loamy soils produced great amounts of wheat, rye, barley and other grains consumed across Eastern Europe. Not surprisingly, Ukrainians are known for their reverence for bread. “To the Ukrainians, bread is one of the holiest of all foods,” wrote Savella Stechishin in her 1979 cookbook, “Traditional Ukrainian Cookery.” “The older people consider it most disrespectful when leftover pieces of bread are thrown about carelessly.” The country is renowned for its creative, masterful baking — both everyday breads and elaborate festival loaves like the sweet, decorative paska eaten on Easter. It’s no wonder, then, that Jewish Ukrainians baked their New Year’s challah with great care and intention.

Rosh Hashanah ushers in a holiday cycle shaped by complex spiritual emotions — solemn personal reflection on the one hand, and great joy and gratitude on the other. It seems only fitting that the foods we eat during the holiday should reflect and heighten the experience. So this year, I hope to bring feygelekh to my Rosh Hashanah table. Oven browned and sprinkled with seeds, they will be a sign of my own soaring hopes and blessings for the future. Plus, I’ll bet they taste fantastic dipped in honey.

1. In a large bowl, mix together the yeast, a pinch of sugar and water; let stand 3-5 minutes until foamy. Add remaining sugar, honey and salt, followed by the oil and three eggs, mixing well to combine.

2. Add all of the all-purpose flour and about 90% of the bread flour to the wet mixture and gently fold with a wooden spoon until the mixture comes together but is still quite wet. Tip the dough onto a clean work surface; knead for about 8 minutes while slowly incorporating as much of the remaining flour as necessary to make a supple, elastic dough. Place dough in a lightly oiled bowl, cover with plastic wrap or a dishtowel and let rise until almost doubled in size, from 45-90 minutes.

3. Preheat oven to 400 degrees and line two baking sheets with parchment paper. Deflate the dough and divide it into 12 small balls. Roll each ball into a 7-inch tube, leaving either end a bit thicker and more bulbous than the middle. Dust hands with flour; tie the tube into a knot and place on a baking sheet. Insert a pumpkin seed for a beak and two raisins (or whatever combination you prefer) for eyes on one end of the knot. Cut two small slices into the other end and fan out slightly, like a tail. Repeat with remaining dough balls.

4. Whisk the remaining egg in a bowl and brush over the tops of the rolls; sprinkle with additional seeds if desired.

5. Place baking sheet in the oven; turn oven down to 375 and cook for approximately 15-20 minutes until lightly browned and baked through. Remove from oven and cool on a wire rack.