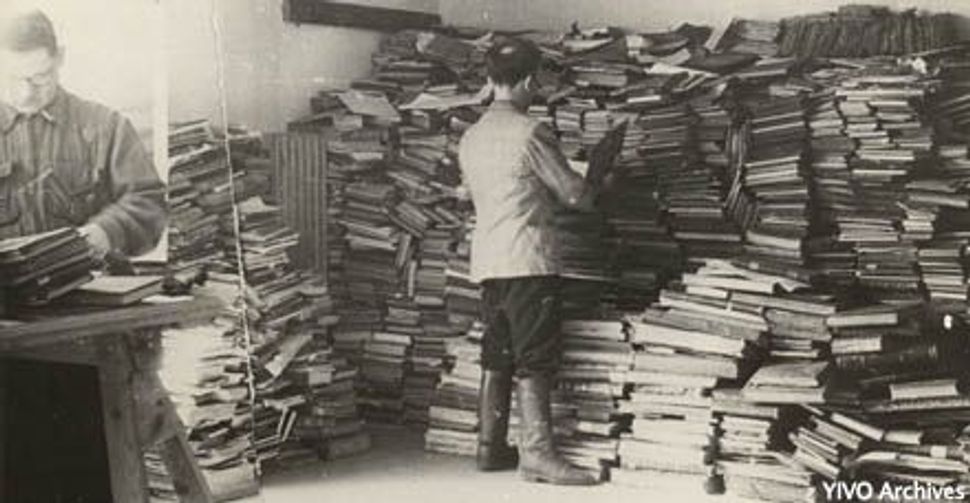 It was supposed to be an evening of celebration and remembrance of the Jews of the Vilna Ghetto. But by hosting the Lithuanian foreign minister as “guest of honor” at a concert of Yiddish songs, the YIVO Institute for Jewish Research has instead angered some Holocaust survivors and their advocates. 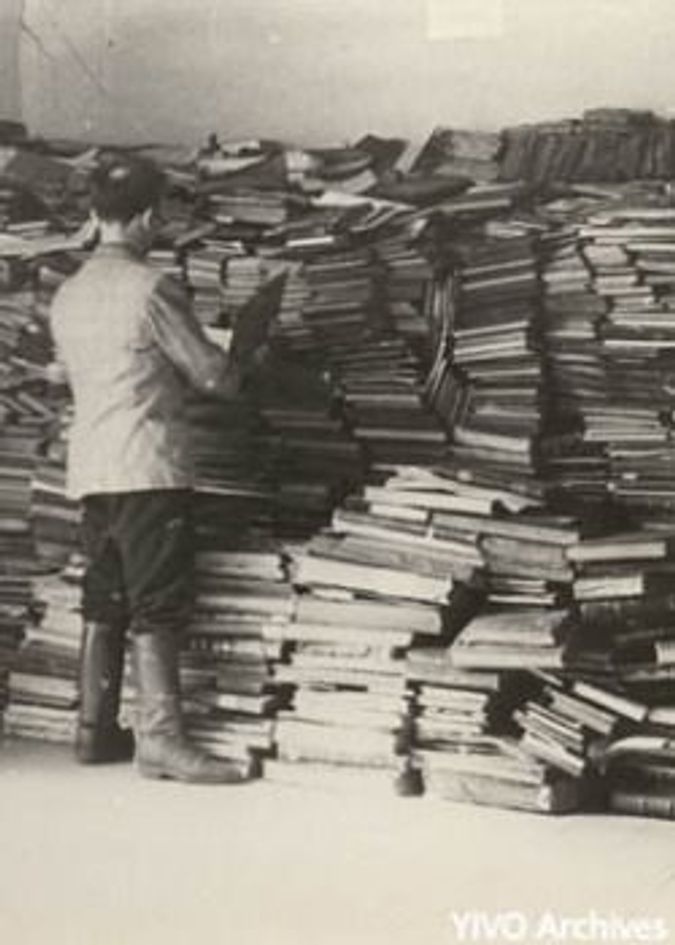 Scattered Records: Shmerke Kaczerginski sorts through Jewish books in the YIVO building in Vilna during World War II. Until the Holocaust, the city was a center of Jewish culture. Image by Courtesy of YIVO

Audronius Ažubalis, the foreign minister, will attend the New York event, called “The Vilna Ghetto Experience,” on September 22. The invitation — issued as YIVO conducts sensitive negotiations with Lithuania about the return of archives it lost control of during World War II — has rekindled a long-simmering debate about Lithuanian complicity in the Holocaust and what is perceived by some as a failure to achieve an adequate agreement on restitution of Jewish property.

“It is very painful that YIVO would make such an error,” said Dovid Katz, a former professor of Yiddish language, literature and culture at Vilnius University and author of defendinghistory.com, a website that is critical of the Lithuanian government. “This is not the moment to have this guest of honor.”

Almost all of Lithuania’s approximately 210,000 Jews, many of them living in Vilna, perished during World War II. Many were killed by Lithuanian paramilitary units working under the Nazis.

Lithuania has been among the countries that have been slowest to pay restitution for Jewish communal properties, such as schools and synagogues, which were seized during the war. After almost 10 years of wrangling, it agreed in July to pay 38 million Euros, then the equivalent of $53 million, over the next decade. But this is substantially less than the properties are believed to have been worth.

In discussing this citizenship law last year, Ažubalis reportedly told colleagues in a closed-door meeting that “Jews of Lithuanian descent” were the driving force behind the proposal so they could “regain most easily their property in Lithuania.” His statement was published in the Vilnius daily, Lietuvos Rytas, and translated on a Lithuanian-American website, Litchat. According to Alfa.lt, a Lithuanian-based news site, the foreign ministry responded within days that the minister’s words had been misrepresented.

Efraim Zuroff, director of the Simon Wiesenthal Center’s Jerusalem office, said the comment was a “disgustingly anti-Semitic remark” and that he would write to YIVO protesting the invitation to the minister.

Zuroff said Ažubalis’s comment was in line with broader Lithuanian attempts to downplay the Holocaust and Lithuanian complicity in the genocide while emphasizing Lithuanian suffering under the Soviet Union, which occupied Lithuania twice during the war.

Zuroff said Lithuania has repeatedly hampered attempts to prosecute suspected Lithuanian war criminals. Meanwhile, it has sought to interrogate a handful of Holocaust survivors who fought as anti-Nazi partisans. They include Israeli historian Yitzhak Arad, a former director of Yad Vashem, whom Lithuania accused of working for the Soviet secret police, and whom it attempted to extradite from Israel to face questions about alleged war crimes. Israel denied the request.

Lithuania ought “not to be honored but censured and criticized harshly for what’s going on there,” Zuroff said.

YIVO’s executive director and CEO Jonathan Brent said in a September 2 interview with the Forward that he would investigate the remarks allegedly made by the Lithuanian foreign minister. In a later e-mail, he said he would discuss the issue with the Lithuanian consul general, Valdemaras Sarapinas, in a meeting on September 8.

Brent said the concert was co-sponsored by the Lithuanian consulate. It was the consulate, he said, that had suggested that the foreign minister, who would be in New York for the U. N. General Assembly, “would be interested in attending.” He added that the “guest of honor” title was a formality and should not to be interpreted as YIVO literally honoring him.

“In fact,” Brent said, “I believe the government of Lithuania is honoring us by acknowledging the suffering of Jewish people by wishing to participate in an evening where the experience of the Holocaust is going to be discussed and expressed in songs and poetry.”

The row over the concert has been complicated by ongoing negotiations between YIVO and the Lithuanian government over the fate of a large portion of YIVO’s archive, which is held in Lithuania.

YIVO was founded in Vilna, then a part of Poland, in 1925, as a center for graduate studies of Yiddish literature, language, culture and sociology. “YIVO was the Oxford of East European Jewry,” said David Fishman, professor of Jewish history at the New York-based Jewish Theological Seminary.

After the Nazis occupied Lithuania, in 1941, about 70% of YIVO’s library and archive was either “recycled” or burned, Fishman said. After the war, about two-thirds of the remaining materials were rescued and shipped to New York. About one-third remained in Lithuania.

Since 1990, successive YIVO directors have fought a seemingly intractable battle with Lithuanian authorities to bring the rest of the collection to America. In the late 1990s, the Lithuanian government agreed to ship a portion of the archive to New York for copying and return. But according to Allan Nadler, who was YIVO’s director of research then, the institute had to secretly pay to copy its own materials.

“Officially, there was a protocol signed between YIVO and the Lithuanian government,” Nadler said. “But under the table there was cash given in order to secure the agreement.“ Nadler said several New York philanthropists came up with the money — “more than tens of thousands of dollars” — in return for several hundred boxes of material. Nadler estimated that the documents represented, at most, about 15% of the archive held in Lithuania.

Brent, who has been negotiating with the Lithuanians for years, believes he may be close to a different solution. He and the Lithuanian government have discussed establishing a room, to be named after YIVO, in the Lithuanian National Library where the documents would be accessible to scholars.

“The YIVO board must vote on this, and we are now conducting a full review of whether the Lithuanian government has demonstrated sufficient credibility as a partner in good faith to warrant this commitment from YIVO,” Brent wrote in a September 6 e-mail to The Forward.

“We’ve been handling with them for two decades now,” Nadler said, using the Yiddish for negotiating, “and so what? We get a sign on a room?”

Elan Steinberg, vice president of the American Gathering of Holocaust Survivors, said: “I don’t know if this is the case here, but historically the effort to divide Jews, to find on the part of our adversaries so-called good Jews to which they can reap the benefit at the lowest price, as opposed to bad Jews who stand on principle is an old historical tactic.”

Both Nadler and Steinberg criticized the invitation of Ažubalis to the concert.

Brent defended the potential deal to secure access to the YIVO archive as necessary to break the cycle of “mutual anger, bitterness, resentment, hostility, acrimony and accusations” that have characterized the past 20 years. Attitudes toward the Holocaust in Lithuania are changing, he said.

Lithuania has a complex past when it comes to World War II and its aftermath. The Nazis were viewed by many Lithuanians as liberators when they invaded in 1941, one year after the Red Army had occupied their country, Nadler said. Lithuanian nationalists equated — and in small part continue to equate — Jews with Communism, he and others said. At the end of the war, the Russians once again occupied the country and then absorbed it into the Soviet Union, which it remained part of until 1991. Several scholars described the country as one still coming to terms with its past in a part of Europe where tens of millions of people died under both Nazism and Communism.

“Clearly there has been progress,” said Rabbi Andrew Baker, director of international affairs for the American Jewish Committee, regarding Lithuanian attitudes toward the Holocaust, “but there have been a lot of painful episodes along the way.”

Baker was a key negotiator in the communal property restitution agreement with the Lithuanian government and has dealt with Ažubalis on a number of occasions. He said he believed the minister’s denial of anti-Semitism. “I think on critical issues he’s been helpful and supportive,” Baker said. “So I give him the benefit of the doubt.”

Simon Gurevicius, executive director of the Lithuanian Jewish community, said both YIVO and its critics are right. On the one hand, Lithuania must be censured for its wartime record and for its nationalistic and, at times, anti-Semitic behavior. On the other hand, Lithuanian society must be engaged and educated about the Holocaust.

“We need to find a balance between seeing bad things and giving an opportunity to Lithuanian society to correct its mistakes,” Gurevicius said.