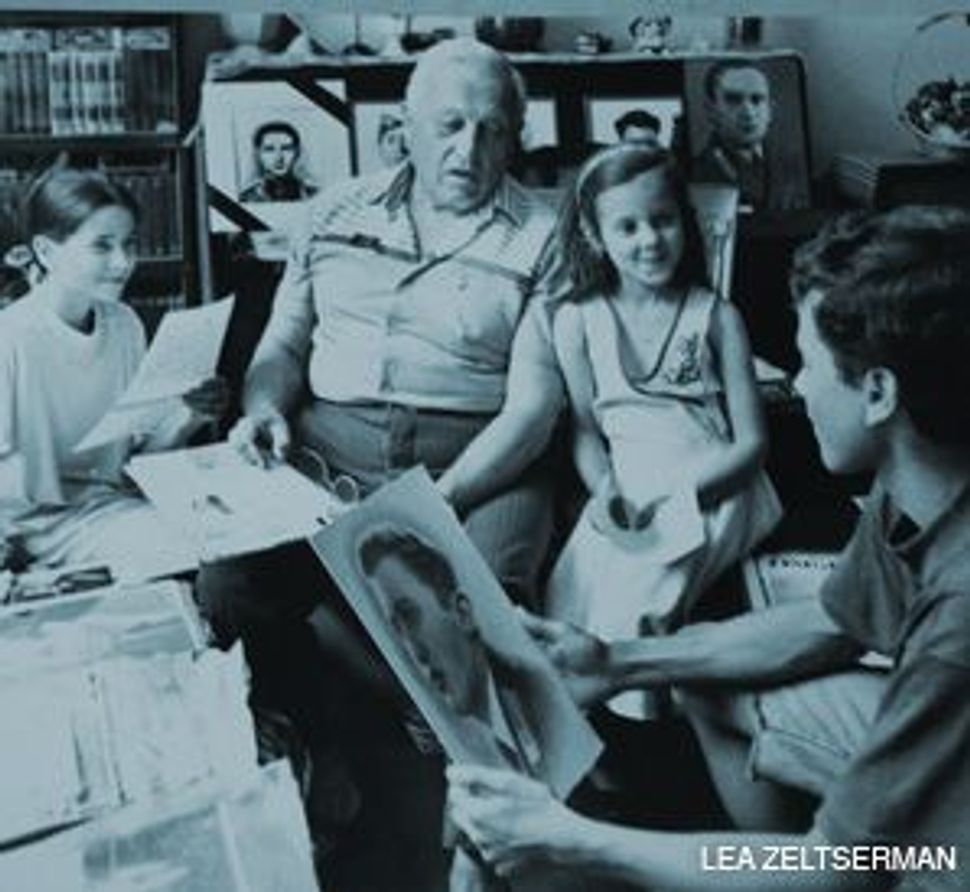 ONE MAN'S CAUSE: Leonid Shenkerin, shown here with his grandchildren in his Toronto apartment, is trying to keep alive stories long buried under antisemitism and propaganda.

Toronto — Leonid Shenker likes to greet visitors to his apartment here dressed in his Soviet military ensemble, the jacket heavy with medals and stripes. At 88, the former Soviet veteran needs a walker to move across the apartment, which he doesn’t leave unless accompanied by his daughter. But his voice is clear and proud as he looks around and says, “Welcome to my museum.” 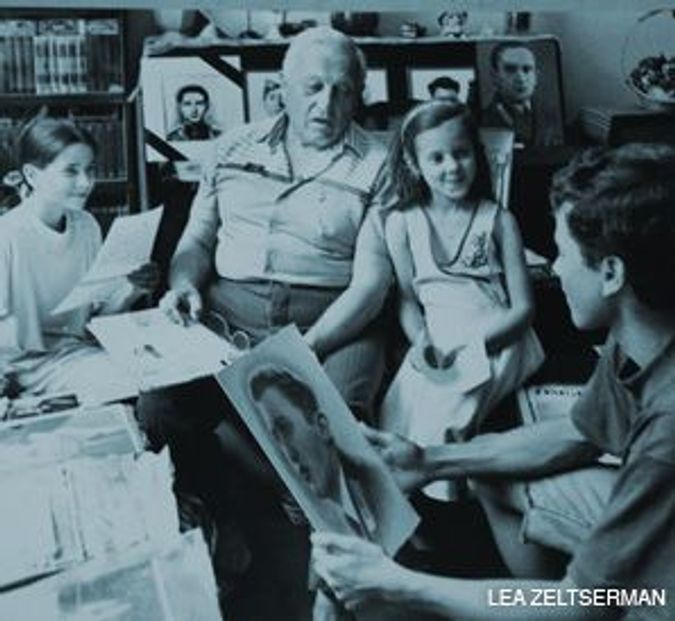 ONE MAN'S CAUSE: Leonid Shenkerin, shown here with his grandchildren in his Toronto apartment, is trying to keep alive stories long buried under antisemitism and propaganda. 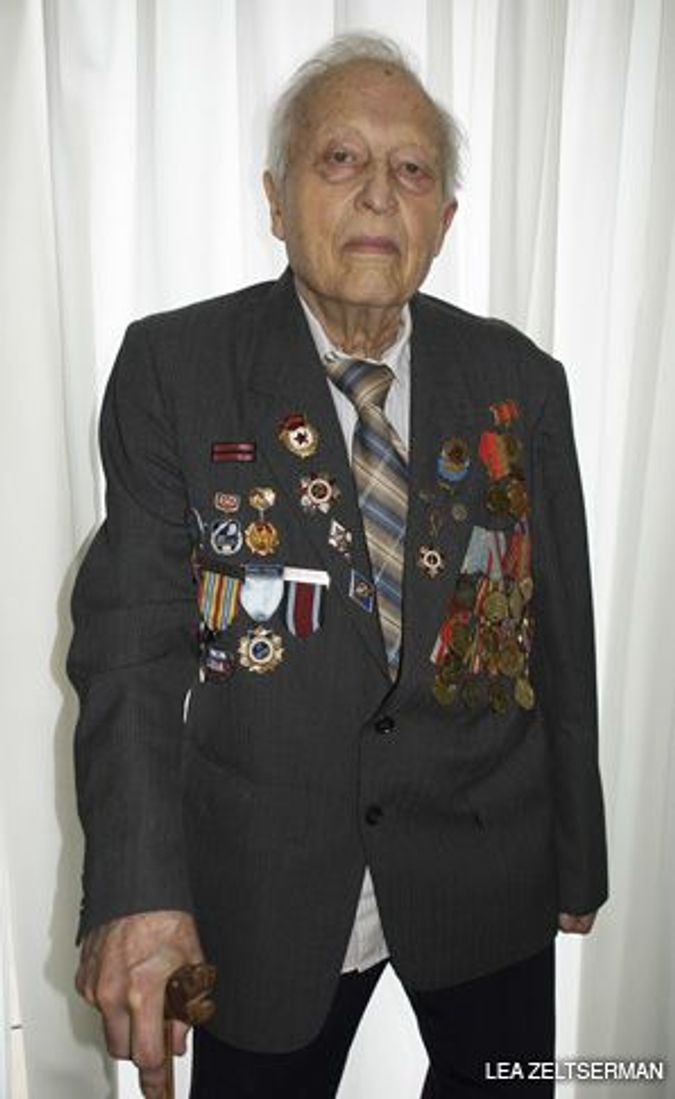 MILITARY MAN: Leonard Shenker, a veteran of the Soviet military, at home, where he keeps his extensive collection of articles about Jewish veterans of the Soviet army.

The “museum,” which is spread around his apartment, is a set of papers, photographs and binders that starts on the night tables and continues over every exposed surface. Somber young men and women in matching Soviet military uniforms stare out from the bookcase, the dresser and even the bed. It is the life’s work of a man obsessed with preserving memory — a collection of individual biographies and photographs of Jews who were named as Heroes of the Soviet Union, the country’s highest military designation.

The collection opens a window on an oft-forgotten part of Jewish history in Eastern Europe — the military heroics of Jews who fought on behalf of the Soviet Union. This history has mostly been swept away by the fate of Jews elsewhere in Europe, and by the antisemitism of the Soviet regime.

“For Soviet Jews, two issues surrounding World War II are very important. One is that 500,000 Soviet Jews served in the Red Army, and paid all the associated costs, and helped defeat the Nazis,” explained Annelise Orleck, a history professor at Dartmouth and author of “The Soviet-Jewish Americans.” “Even more important is that one-and-a-half million Soviet Jews were executed by the Nazis. The Holocaust didn’t just take place in Poland, France and Germany.”

In maintaining his collection, Shenker has run up against the voids in Jewish collective memory. He is now on a quest to find a new home for his collection, and he spends his days pressing whoever will listen with photographs and papers, a nonstop whir of phone calls and letters.

Over the years, bits and pieces have been made public — a few self-published, flimsy Russian paperbacks, an exhibit in the Vienna Jewish museum. In 2004, the local Russian-Jewish veteran community put on a small event showcasing some items. But the collection remains in the apartment, and beneath the enthusiasm is desperation.

“I just need something,” Shenker said, “so that the memory of these heroes does not die with me.”

Shenker’s passion is largely driven by his anger over the antisemitism surrounding Jewish participation in the war. It was a commonly held myth — and a crude joke — that Jews had spent the war on the Tashkent front, in Uzbekistan. The joke is that there was no front in Tashkent, the Jews were simply cowards who fled the fighting.

Of the 500,000 Jews who fought in the Red Army, 40%, or 198,000 people, were killed. Shenker says he has found 156 Jewish Heroes of the Soviet Union, along with a number of people who were short-listed but, because they were Jews, never got an award.

Between 1934 and 1991, nearly 13,000 people were named Heroes of the Soviet Union, the overwhelming majority for exploits during the war.

The Soviet Union did not distinguish the specific traumas faced by Jews under the Nazis from general Soviet suffering, nor was the Jewish war contribution ever specifically noted. That history is slowly coming to light, thanks to efforts by, among others, Shenker and the organization Centropa. Based in Vienna and in Budapest, Centropa recovers lost stories of Eastern European Jewish daily life. An online exhibit is dedicated to stories the organization has gathered of Soviet Jews who spent the war on the front and of those evacuated to Siberia to escape the Nazis.

“The story of Jews in the Soviet army is a powerful and compelling one,” said Edward Serotta, director of Centropa. “I don’t blame American Jews for not knowing about this phenomenon. I blame those of us who care about the issue for not creating the kinds of books and films and exhibitions that would help change their minds.”

Shenker was born in Tashkent and spent summers at a Young Pioneer camp specifically for children of military officers. At 18, he entered the military academy. By the end of the war, he’d been named a senior lieutenant and found himself stationed in Berlin. He lost part of his hearing, and his legs have never completely recovered from the freezing temperatures.

Shenker began gathering documents in the 1960s. For years, he traveled across the country, entirely self-funded, taking trips as far as Moscow, Ukraine and Belarus, searching through libraries and museums where he could copy biographies, newspaper clippings, portraits — anything he could get his hands on. In a culture heavy on pro-Soviet propaganda, published accounts of Soviet Heroes were readily available.

In Minsk, he found an encyclopedia listing all the Soviet Heroes, and he carefully combed through it to determine who was Jewish and who wasn’t. “Not every Abramovich is a Jew and not every Jew is an Abramovich,” he quips. He kept up with other people who collected material on the Soviet Heroes, but due to fears of antisemitism, Shenker was always careful to avoid mentioning his specific interest in Jews.

The Shenkers moved to Israel in 1993, boxes in tow. It was a disappointing experience. After battling Soviet propaganda about Jewish cowardice, Shenker was faced with ignorance about the Soviet Jewish experience during the war. Orleck said that even Israeli academics have been “averse to recognizing the Soviet Jews as survivors and as fighters in the war.”

Shenker speaks of the indifference with bitterness.

He contacted several museums about his collection, including Yad Vashem, but was rejected. The stories he had to offer were of neither Holocaust victims nor Zionist fighters, the stock-in-trade of contemporary Jewish mythology.

He did have some success. Shenker became involved in a campaign for recognition of the Soviet military in Israel and wrote letters to Israeli politicians. In 1999, the Israeli government declared May 9 as a national day to honor the victory over the Nazis. That day is now marked with parades and ceremonies organized by aging Russian veterans.

In 2001, Shenker and his wife moved to Toronto, where their daughter had already relocated, and Shenker began his fight anew.

There has been some recent interest in the collection. Anna Shternshis, a professor at the University of Toronto and the author of “Soviet and Kosher: Jewish Popular Culture in the Soviet Union, 1923-1939,” has been cataloging the material over the past year. She found Shenker when she placed an ad in a Russian paper looking for people who were evacuated during the war.

Shternshis took the collection seriously and found a student to help with cataloging and organizing. But eventually she came to the conclusion that while Shenker’s material was good, it did not contain enough firsthand information from the Soviet Heroes themselves.

“I used to think it was very valuable, but it’s not, because it’s not original material,” Shternshis said. “It’s his passion that is unique.”

Whether Shenker’s collection finds a home, the fact remains that the Soviet wartime experience has largely disappeared under the weight of the Cold War. Since the collapse of the USSR, the world has moved on, including Shenker’s own family.

His daughter, Inna Milirud, a computer programmer with grown children, echoes her father’s bitterness about the lack of interest in Soviet Jewish history.

“Nobody wants to know that some Jews fought the Nazis,” she said.

But even Milirud takes a pragmatic approach to the fate of her father’s work. “I don’t want it to get lost, but it’s hard for us. We’re immigrants; we have our lives to build,” she said. “Life goes forward, and people want to think of happiness. It’s important to remember, but not to make a life of that.”