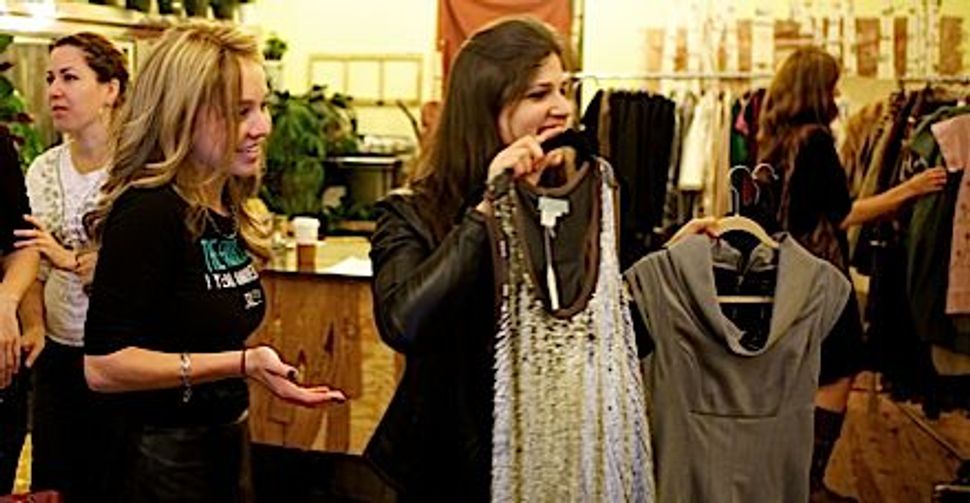 On a recent Sunday, Nechama Silverberg slipped into a vintage skirt at a pop-up consignment store in Brooklyn, trying on clothes as any other hip 20-year-old might, but for one difference: She carefully measured whether the skirt revealed her knees.

Around her in the Frock Swap, an Orthodox clothing business celebrating its first anniversary, were other women pushing the boundaries of modesty: an exposed elbow here, a bare collarbone there, a skirt that ended at just the wrong side of a pair of knees. Many were on the lookout for unique outfits for the coming High Holy Days. Some were engaged in angst-ridden mental calculations about whether an item was tznius — modest according to Jewish law — and if not, how it could be altered.

Stores and websites such as Junee and FunkyFrum have been catering to more style-conscious Orthodox women for some time. At the Frock Swap, plenty of women pulled off stylish outfits with nary an elbow or a knee in sight.

But, anecdotally at least, more women are taking liberties with the laws of tznius. It’s evident on main streets and in kosher cafes and restaurants in and around major cities like New York and Los Angeles, fueling snide comments about “hot Chanis” and earnest debates about the merits and nuances of aspiring to be “tznius sexy.”

Tznius is a particularly gray and, it seems, malleable area of Jewish communal life. Rabbi Avi Shafran, a spokesman for the conservative Orthodox umbrella organization, Agudath Israel of America, said there are two ways to interpret this practice. There is the halachically mandated “covering up,” which refers to a woman’s upper arms and upper legs and to a married woman’s hair. Then there are “communal norms,” such as a prohibition against bare feet, which are not “inherently mandated” and are therefore left up to individual communities — and in many cases, individuals — to decide. 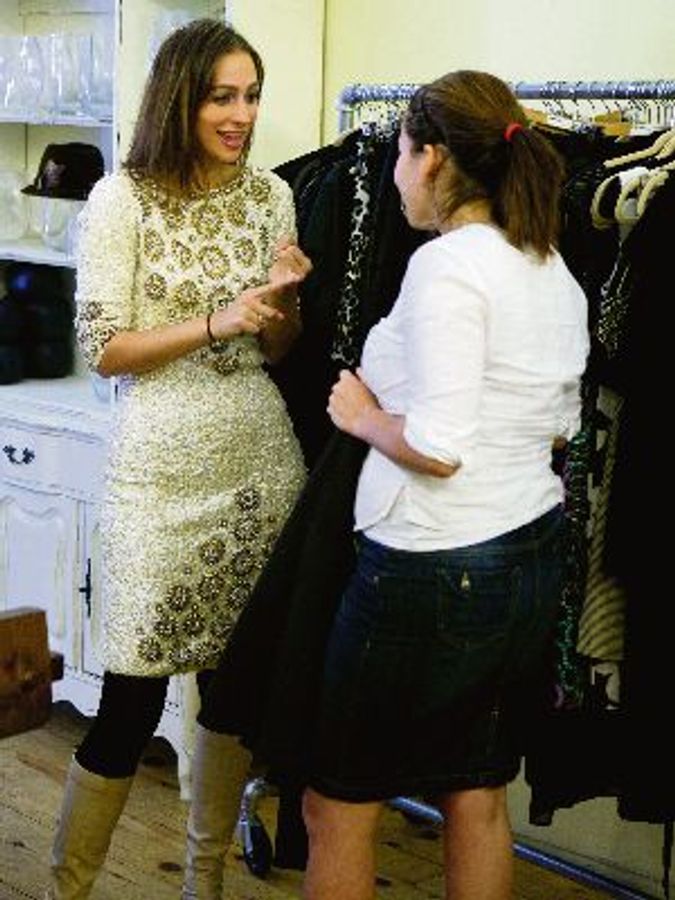 Shopping Spree: Lakey Nemes (left) tries on a sequined dress at the Frock Swap. She didn?t buy it because it wasn?t modest enough. Image by Simon Weaver

“As in every community, there are ideals,” Shafran said, adding that there are those who hew to them as well as those who fall short of reaching them.

“I think that a stroll in Crown Heights or Williamsburg or Boro Park will evidence a good deal more of the former, but, I’m sure, examples of the latter, as well.”

Indeed, this past summer a debate over tznius exploded in the Dear Rachel advice column pages of The Jewish Press, which covers the largely Jewish Five Towns on Long Island.

“Is it a sin for a frum girl to have the desire to make herself pretty?” asked one correspondent, who said she liked to dress unconventionally but always within the bounds of modesty. Another reader railed against married women who wear “enormous, garishly styled custom wigs” and clothes “so tight, it is a wonder they breathe.”

“These women are a disgrace to Orthodox Judaism and should not be tolerated,” the exasperated reader wrote.

Allison Josephs, founder of an outreach website, Jew in the City, said that the problem for women lay in defining the line between style and tznius. Always having taken care of how she looked, and raised in a Conservative Jewish household, Josephs, who is now more observant, said, “It was actually very important for me to see that I could express that part of myself and still feel good about myself while living a Torah-observant life.”

“Tznius sexy could go in two different directions,” added Josephs, who recently gave a talk, “Frum and Fabulous,” to a group of Modern Orthodox women in Cherry Hill, N.J. She said there are women who conform to tznius and look stylish, retaining a “mystique” that “leaves something to the imagination.” Then there are women who “follow the rules, but not the spirit of the law,” managing to cover all the right areas and yet still look “too sexualized.”

For some women, what other members of the community think is of little importance so long as their husbands, and perhaps their rabbis, approve. But they must also pay attention if they want their child to attend the right yeshiva. Chaya Chanin, a mother of two who co-founded the Frock Swap with her sister, Simi Polonsky, and lives in Crown Heights, said, “There are schools in the neighborhood who will only accept [students of] parents if they dress in a certain way.”

The sisters, who grew up in Sydney, Australia, are daughters of a Chabad rabbi. Chanin, 26, said they always had a passion for finding ways of blending fashion with Halacha. They would take a short dress or a sleeveless or low-cut top and turn it into something modest “while still being fashionable.” Women at the Frock Swap spoke of shopping in big box stores to hunt for tznius-compliant pieces, or of finding inappropriate items and then adding fabric, taking down hems or slipping a top underneath to solve the problem of revealing too much.

Polonsky, 25, lives in Cleveland and flies to New York every four to six weeks for Frock Swap sales. She said that she has to dress slightly more conservatively in Ohio than in New York. She also said that there are some items the Frock Swap never accepts, such as miniskirts or pants. “We want to help people look good and be tznius,” she said.

Polonsky pointed to the racks around the store, which had taken over a Crown Heights florist shop but could just as easily have been set up in a Five Towns living room or in Chanin’s home. There were high-end designers such as Armani, Fendi, Gucci and Marc Jacobs; a 1960s Ports jacket for $565, and a Montclair jacket for $500. Less expensive items, such as pieces by Nanette Lepore and See by Chloe, were there “to keep the price range available to everyone,” Polonsky said.

Polonsky, Chanin and a few helpers were dressed in snug black T-shirts emblazoned with the Frock Swap name on the front, and slogans on the back that ranged from the innocent “Dare To Be a Frock Star” to the more provocative “Like I Give a Frock.” At the front of the store, a speaker blasted out a range of music from Aretha Franklin to Eminem. By midday the store was alive with about a dozen women — some with strollers, others carrying babies under their arms. Even some girls from a local yeshiva stopped by in their uniforms to flick through the racks of clothing.

“It’s very personal for each woman,” Silverberg said of the mental calculations that went into a decision about what to wear. “I feel that what Halacha gives us is a gift of laws that can outline how to be self-dignified.” But she added, “There’s no law against looking beautiful.” Avigayil Waxman, 19, who looked striking in a baggy orange shirt and a black-and-white pencil skirt that ended above the knee, said it was a battle for every girl trying to be fashionable and tznius. “Everyone defines it differently,” she said.

“At the end of the day, everyone knows if they feel guilty or feel good for what they are wearing,” said another woman named Nechama, 22, who declined to give her surname. “You have instinct, God gave that to you.