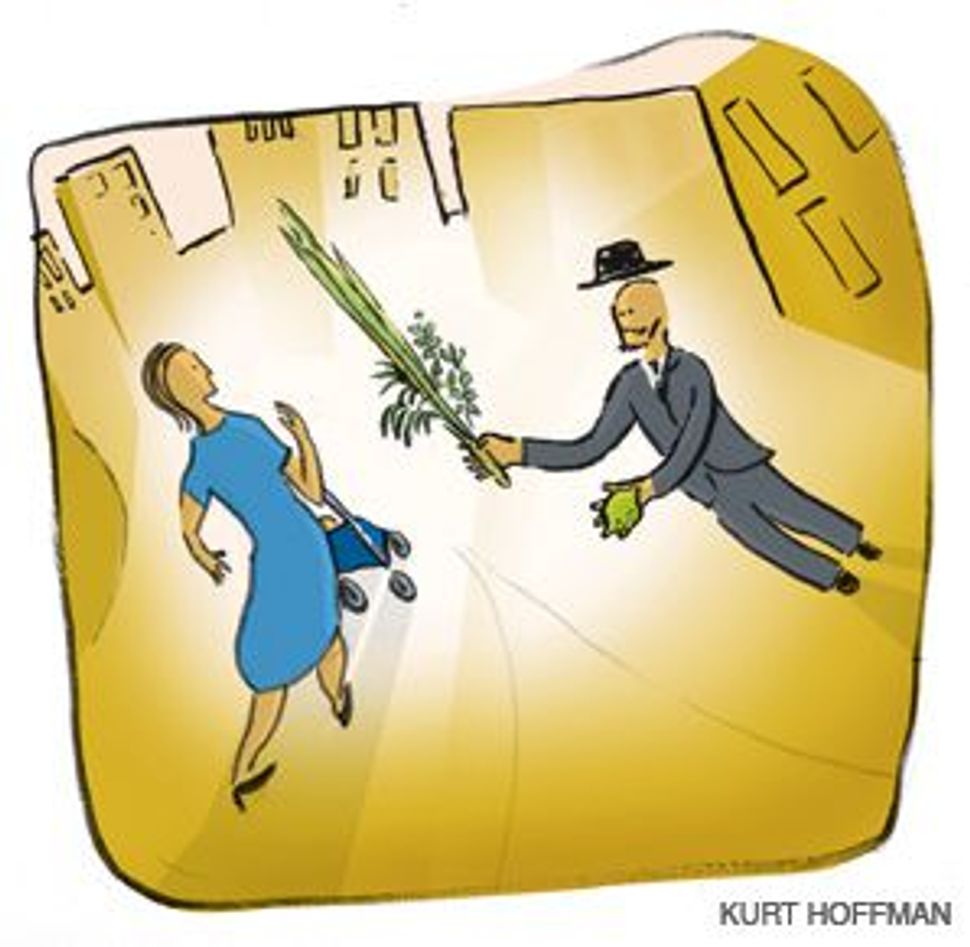 I was pushing my son’s stroller along the main avenue of our Brooklyn neighborhood on a bright fall morning, when I was stopped by a bearded man in a top hat, his long black coat flapping. 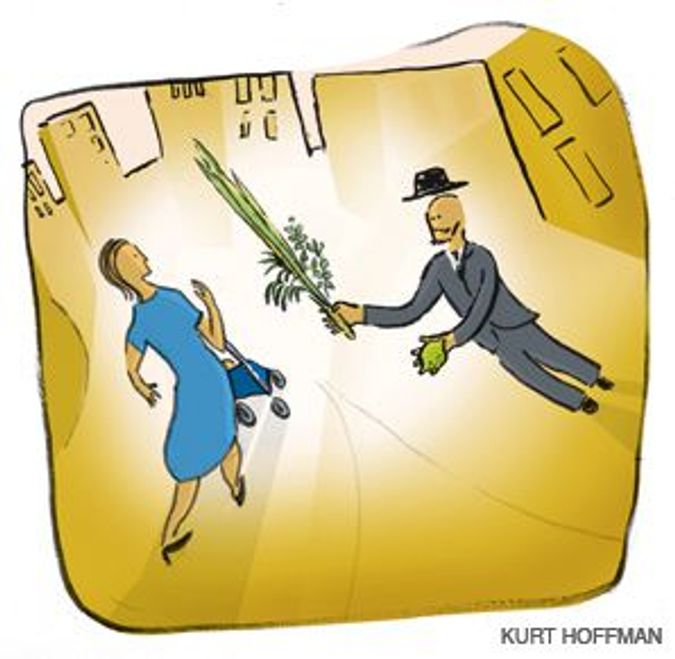 “Excuse me, are you Jewish?” he asked.

I stared at him, stunned for two reasons: The simpler of the two was that it was my understanding that Hasidic men did not approach strange women on the street. But the second, more complicated reason was that I had never in my life been taken for Jewish. In fact, people often expressed incredulity when they found out I was Jewish. “Really? You? Impossible.”

This had always made me uncomfortable; I found it vaguely antisemitic. And so I tended to lead with my Jewishness, to announce it at the earliest possible opening.

I felt uneasy as I continued to walk. When is it ever appropriate for a Jew to disavow being a Jew? I know why I did it: The last thing I felt like dealing with was the lulav he was thrusting at me, the etrog — he wanted me to say the Sukkot blessing. I was overcome with images from my childhood: My father’s strong square hands holding the lulav, shaking it gently in each direction; the sweet, lemony smell of the etrog as he lifted it to my nose. I wanted my childhood back, but my father was dead and the holidays of my youth were long gone. I didn’t want to say a lonely prayer on a crowded Brooklyn avenue with a bearded stranger. I tried to justify my lie to the Hasid by telling myself that to him, I was not a Jew. Not a real Jew, though family yichus would have impressed him: My grandfather was one of the founders of a prominent Manhattan shul, and a well-known philanthropist who had built many yeshivas in Israel. My uncle had been president of the Orthodox Union. But as a grown woman I didn’t even belong to a temple. I had moved far away from all that. So far that the words slipped from my mouth, a slippery, bitter pill: No, not Jewish.

I am most Jewish when I sit down to write. It’s not a conscious thing, the cadence of the words, the way that characters who were amorphous to me become clearer, suddenly sharper, when they assume qualities I think of as Jewish. Guilt, for instance. My characters often feel guilty. They are plagued by vague, unknowable dread. And oh, are they hypochondriacs! Every earache is a brain tumor. Every tingle or twinge, a stroke. And while I know that Jews don’t have a lock on these neuroses, if I were to attempt to write, say, an Irish Catholic character, I wouldn’t know where to begin. What are Catholic neuroses? Episcopalian? Muslim?

So I stick to the Jews because that is the music I know. Because when my mind wanders freely, when I am taking a bath or a walk, or rocking my baby to sleep, in the repetitive motion, what I hear is the melody of “Ain Kelohenu” drifting through my head. Because in moments of fear, what I say is the Sh’ma.

Flannery O’Connor once said that any writer who had survived childhood had enough material to last a lifetime. If this is true, my material, until I reached age 15, was deeply Jewish. I went to a yeshiva until I was in the seventh grade. I was the only child of an Orthodox father and a secular mother, and my religious observance, or lack of it, was often their battle ground.

So as I was forming as a person, these conflicts were also forming inside of me, adhering to my bones. It should come as no surprise, then, that my material, in three of four of my books, has concerned itself with themes of rebellion, assimilation and passing. As writers, our obsessions become our themes. The question is always, what obsesses you? What makes your blood rush? What unanswerable question are you trying to answer for yourself over and over again? And yet, if you know too much, if your answer about obsession comes easily, intellectually, if you have psychoanalyzed what haunts you to the point where the words are polished like stones, you lose the power to transform the obsession into art.

So here is what I know, and I try to stay dumb about it so that paradoxically, it remains within my grasp as a writer: I am a woman, a mother, a wife, a Jew, an urbanite, a daughter, a teacher. I am all these things, not necessarily in that order, and I am other things, as well. I am someone who lost her father young; I am twice divorced; my mother recently passed away. Any morning that I sit down to write, any of these things may be at play in my mind and emerge on the page in unexpected ways, just as the detritus of the day — that morning’s headlines, the car alarm blaring on the street, a wrong number — might also appear.

Which is not to say that creation is random — far from it. What continues to amaze me, in observing both the process of my own work and that of my students, is that the unconscious has its own coherence. If I get out of my own way, I will write something. And once I’ve written it, once the words are there on the page, then I have something to work with. The blank page is blank — it is nothing. It has no character, other than its opaque and sometimes mocking blankness. But then, on a good day, the steady line of words comes from a place I don’t entirely have access to or understand. Once on paper, the words have veins and texture, and a shape begins to emerge from them, rising like a ghost.

When I am singing “Adon Olam” into the top of my son’s head as I dance him around the living room, I am coming from that place I don’t understand. Or when, at shul on the High Holy Days, I remember every word of Kol Nidre even though I haven’t been at services in years, I am also coming from that place. It is indistinguishable from memory, and as I sing the words, words I don’t know, and as I fight back tears because something has been lost and found in the same moment, I am fully alive, I am all the pieces of myself that I need to be when I sit down and write.

I have promised myself that I will respond differently the next time a bearded man in a black flapping coat approaches me on the street. “Are you Jewish? Are you Jewish?” It is not safe, ever, even for a misguided moment, to disavow such an essential part of who I am. Jewish? Yes, I would have to say. And then, with the lulav in one hand and the etrog in the other, I would say the bracha standing on the Brooklyn street corner, shaking the lulav once in each direction, gently, the way my father taught me. I would sniff the etrog, my madeleine, and then I would go on, more myself than before.