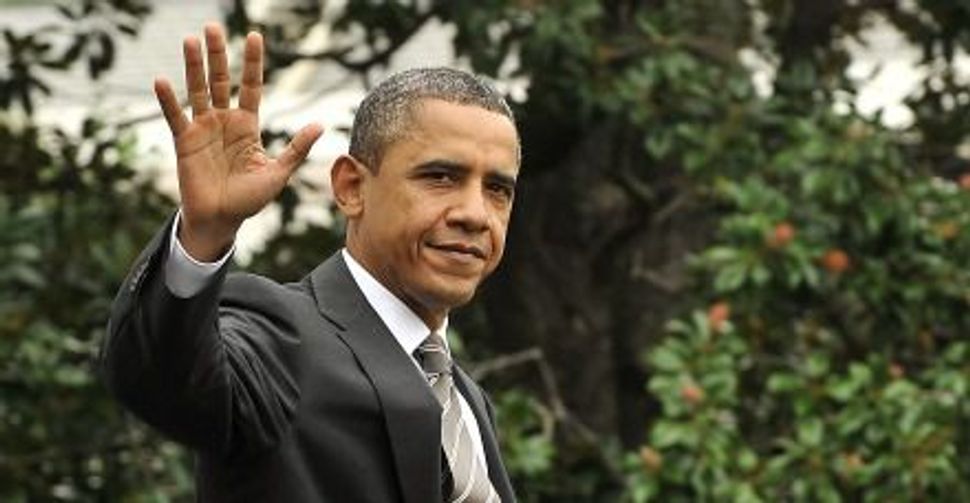 An intense week of high-profile speeches and backroom diplomacy, which reached its climax with an official Palestinian bid for statehood, has reshaped the Middle East peace process, eroding the American position as lead player — which may, in fact, be President Obama’s strategy.

Days after Palestinian President Mahmoud Abbas took to the United Nations stage and, to the applause of most member states, waved a paper requesting Palestinian independence, the process has moved to two parallel tracks. One includes a lengthy, perhaps endless, discussion in the U.N. Security Council about the merits of the Palestinian request to become a full member of the international body. The other involves a new drive by the Middle East Quartet to have Israelis and Palestinians enter negotiations based on a detailed timeline leading to the end of 2012 as the finishing line for peace talks.

At the U.N., both the Israelis and Palestinians seem to have gotten less than they had wanted. Abbas succeeded in raising international sympathy to his cause, but left New York without a vote on Palestinian statehood. Israeli Prime Minister Benjamin Netanyahu managed to secure U.S. support for his positions, but still has to face the call for providing the Palestinians with a route for a negotiated peace.

For the U.S., however, the U.N. showdown signaled a new phase in its Middle East involvement, marked by a pronounced pro-Israel attitude and a back-seat approach to peacemaking.

“Obama lost his leverage on the Israelis because of his own politics and lost his leverage on the Palestinians because of their politics,” said Aaron David Miller, of the Woodrow Wilson Center for Scholars. Miller, a former State Department official who spent decades working on Arab – Israeli peacemaking, said that Obama is moving into election mode and therefore will be less engaged in attempts to broker a deal. “He needs to get re-elected and cannot afford unproductive fights,” Miller said.

The positions articulated by Obama in his September 21 speech at the U.N. General Assembly and the actions followed by his administration indicate that America is stepping back from leading the process.

Absent from Obama’s U.N. speech were the detailed set of principles for advancing the peace process, including a call to resume negotiations based on 1967 borders with mutually agreed land swaps, that he had emphatically promoted last May. Instead, Obama told the U.N. that the parameters for peace were “well known” and focused on explaining the security concerns of Israel, a nation he described as “surrounded by neighbors that have waged repeated wars against it.” That theme was repeated a couple of days later by Netanyahu, who devoted most of his speech at the U.N. General Assembly to describing the dangers Israel faces in the region. Obama steered clear of presenting any plan for the resumption of peace talks and refrained from putting forward any demand from the Israeli side. He even dropped the customary line regarding the need to halt settlement activity.

This didn’t please those on the left. “The United States cannot maintain credibility as the standard-bearer of rights and freedoms while the Israeli-Palestinians conflict is left to fester,” said Debra DeLee, president and CEO of Americans for Peace Now, who also called on the president to return to the principles he himself had articulated.

Most other Jewish groups, however, praised the president’s speech and focused on his strong support for Israel’s viewpoint.

“President Obama, Secretary of State Hillary Clinton and their teams deserve much appreciation for their tireless and successful work,” said Jennifer Laszlo-Mizrahi, founder and president of The Israel Project, who praised the administration and Congress for a “major diplomatic victory.”

But the consensus in the foreign policy community is that Obama emerged from this crisis weaker and less involved.

“America, once the orchestrator of Middle East peace talks, always until now a prime driver behind the scenes, had assumed a new, much more reactive role,” wrote David Rothkopf, a visiting scholar at the Carnegie Endowment for International Peace in Foreign Policy magazine’s website. “America,” he added, “now seems to be a less influential actor than it has been for most of the modern history of the Arab-Israeli relationship.”

The Obama administration publicly refutes this analysis, arguing that the next moves by the Middle East Quartet are an expansion of what the president has already stipulated. “What we’re doing here is taking what the president said and turning it into an operational tool,” a senior administration official said in a briefing on September 23. “And the United States will be playing a consistently active role in helping with the parties on that basis.”

The Quartet, comprised of the U.S., Russia, the European Union and the U.N., was set up in 2002 to give broader international legitimacy to American efforts to broker peace. For years it was seen as a rubber stamp for U.S. policy, but in recent months the Quartet has assumed a larger role and its special representative, former British Prime Minister Tony Blair, has taken the lead in negotiations regarding the Palestinians’ U.N. bid.

The behind-the-scenes maneuvering that led to the Quartet’s statement demonstrates the decline of America’s central role in the process. The statement includes a call for the sides to enter talks within a month and to end negotiations by December 2012. In between, the parties are required to come up with significant ideas on the issues of borders and security and to attend a peace conference in Moscow. The statement does not include, however, any definition of “terms of reference” or a mention of the 1967 borders.

According to American and Israeli diplomatic sources closely involved in the process, the U.S. faced fierce opposition in the Quartet discussions from Russian representatives who refused to include in the statement a call on Palestinians to recognize Israel as a Jewish state. The U.S. believed having such a statement could help make Israel more willing to enter negotiations based on the 1967 borders with land swaps — a requirement of the Palestinians. At the end of a tense week of wrestling, the U.S. was forced to compromise on the language and drop the demand for a Palestinian statement accepting Israel as a Jewish state. The U.S. also agreed to hold an international peace conference in Moscow as demanded by Russia.

Chances for the new timeline set forward by the Quartet to be adopted by the sides seem slim. Abbas already stated that the plan lacks the needed terms of reference to make it useful as a basis for negotiations. Speaking to reporters on his way back to Ramallah, Abbas said the Palestinians could not accept any proposal that “disregards the conditions” set forth by the Palestinians for renewing negotiations.

In his U.N. speech, Abbas stressed that his bid for statehood recognition is not an alternative to negotiations and that Palestinians still adhere to the two-state solution. But he warned that “it is neither possible, nor practical, nor acceptable to return to conducting business as usual, as if everything is fine.” Abbas added that negotiations will be “meaningless” without clear parameters and a specific timetable.

Netanyahu, on the other hand, embraced the plan, which does not include any specific demands from Israel. The Israeli prime minister has repeatedly called on the Palestinians to enter negotiations unconditionally. In his September 23 U.N. speech, Netanyahu extended an invitation to Abbas to meet immediately. “Let’s meet here today in the United Nations,” Netanyahu said. “With God’s help, we’ll find the common ground of peace.” The meeting, of course, never took place. Abbas was already on his way to the airport when Netanyahu delivered his speech.