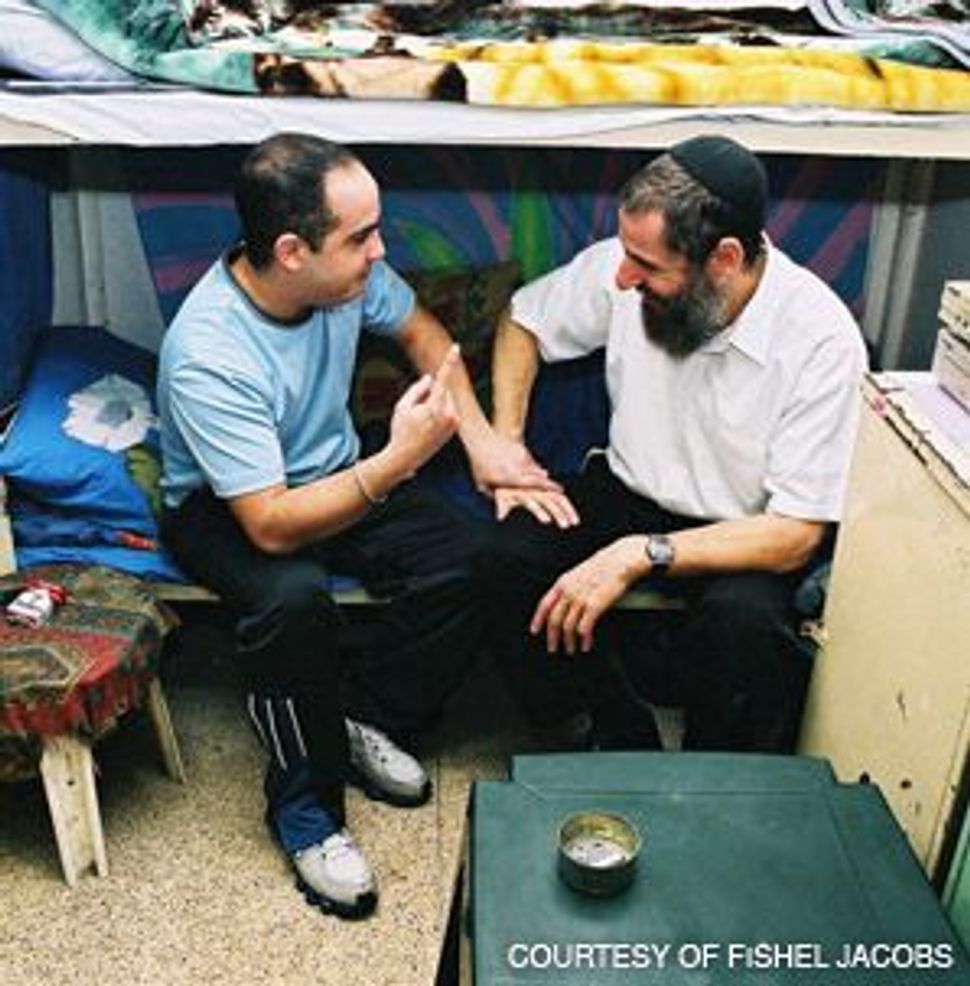 REPENTANCE: Rabbi Fishel Jacobs, right, has served as a chaplain in Israel?s prisons. He says prisoners often come to religion and by doing so benefit in sentencing hearings.

Haifa, Israel — In this season of Jewish repentance, Israel has been captivated by a debate about religious forgiveness for the people who might be thought to need it most: criminals. 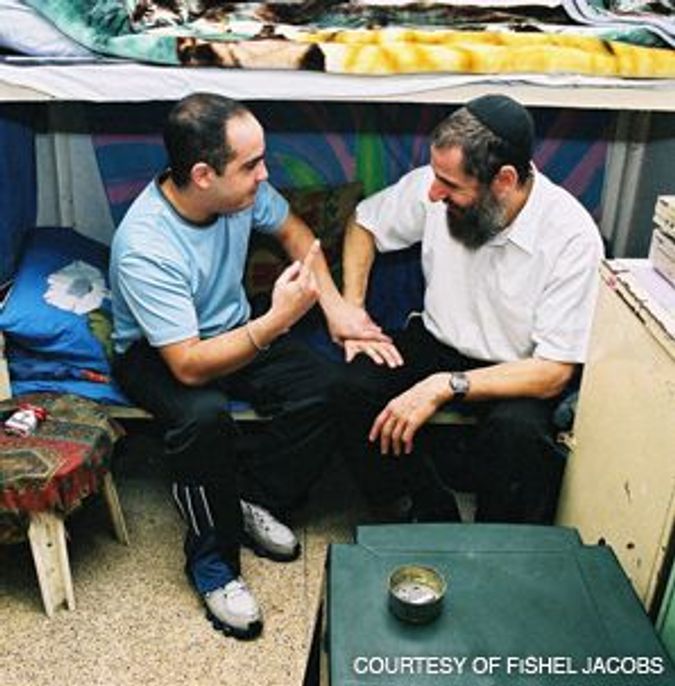 REPENTANCE: Rabbi Fishel Jacobs, right, has served as a chaplain in Israel?s prisons. He says prisoners often come to religion and by doing so benefit in sentencing hearings.

Just before the High Holy Days began, the Ashkenazic chief rabbi of Israel, Yona Metzger, pointed to what he and some others have said is secular Jews’ trend of pretending to be religious in order to curry favor with judges. In a now infamous case that came to trial earlier this year, a teenager accused of murder showed up in court wearing a yarmulke, drawing an angry outburst from the murdered woman’s mother.

Speaking at an annual pre-Rosh Hashanah ceremony for police commissioners and security officials, Metzger said that the trend he described “is an abuse of religion and a complete disregard of the judges’ intelligence.”

“If someone has committed a crime and truly wished to repent, it is, by all means, the right thing to do,” Metzger said. “But this new thing we’re seeing, where killers are arrested and then they wear a kipah when appearing before the judge, is despicable.”

The particular use of religion that Metzger spoke about arises in part out of the flexibility in the Israeli courts. While most crimes in America come with clear sentencing guidelines, Israeli experts said that judges in their country have much more discretion.

“Here in Israel, until now we have had a traditional open system where there is a maximum sentence and the judge uses discretion,” said Leslie Sebba, a criminologist at The Hebrew University of Jerusalem who is an expert on Israel’s penal code.

While it is impossible to compile statistics on what effect displays of religiosity have on judges and parole boards, experts believe that given the Israeli penal system’s commitment to rehabilitation rather than punishment, the displays do work in a criminal’s favor.

“It certainly helps,” said Moshe Addad, a criminologist at Bar-Ilan University. “A judge taking it into account in a murder case may give seven years instead of 10.”

The phenomenon that Metzger pointed to has come up in numerous cases, including hearings involving the Alperon family of Givat Shmuel outside Tel Aviv, which is alleged to have businesses that apply extortion and strong-arm tactics.

“It’s so common that people don’t remember the cases,” said Uri Timor, a Bar-Ilan University criminologist who is an expert on religion in Israeli prisons. The one case that was singled out for widespread media coverage, however, was when the teenager accused of killing young attorney Anat Pliner entered court last June wearing a yarmulke. The trial is ongoing.

“All of a sudden he puts on a yarmulke,” Pliner’s mother, Tehiya Aharoni, yelled at the defendant, according to press reports at the time. “All of a sudden he is religious. Does everyone who commits murder become religious? Murderer!” She later screamed: “Murderer! Take off the yarmulke! Don’t disgrace the religion!”

“Most of it is manipulation,” Shoham said. “All kids and murderers show up with kipot and peyot [side curls]. There are some true cases, but they are rare.”

Shoham said that such religious transformation, whether or not it’s real, provides benefits not only in sentencing, but also in prison, where religious prisoners receive exemption from work for study and for Sabbaths, as well as better food.

While this depiction raises alarm among distressed relatives of not only victims, but also the likes of Metzger and Shoham, others see it as the strength of Israel’s penal system.

Timor said that any pressure to seek out religion could help criminals overcome the problems that got them there in the first place. His research suggests that while 70% of Israeli prisoners return to prison within five years, among prisoners in religious wards the figure is only 10%.

“If they put on the kipah and stay with it in prison, it changes them,” Timor said. “It arouses anger, but I say, why? Sometimes they become the person they are projecting.”

Fishel Jacobs, a Chabad rabbi who sat on parole boards during his 14 years as a prison chaplain, said that religious observance is a factor considered by the boards. Jacobs also admitted that inmates are often attracted to synagogues for the perks they offer. He noted, however, that the interest in religion tends to become genuine.

“I don’t think it’s the job of the chief rabbi of Israel to question anyone’s motive for wearing a skullcap at any given time,” Jacobs said.