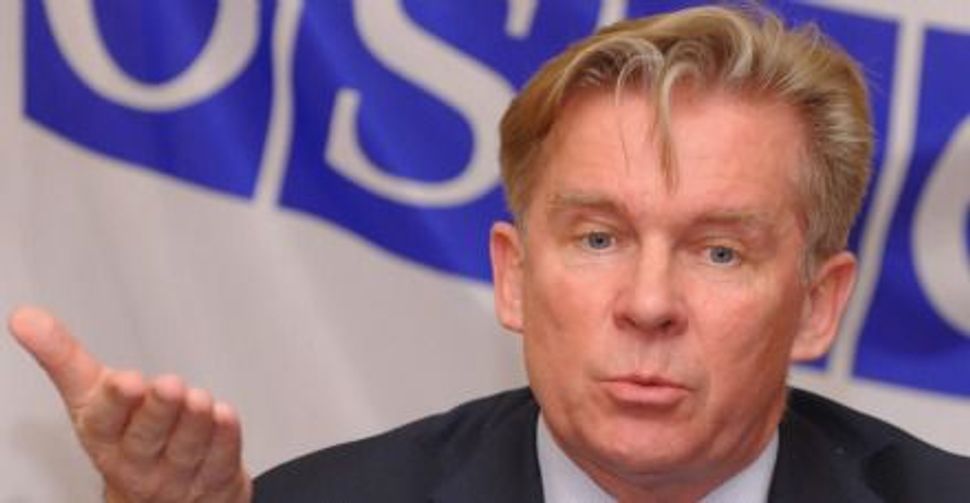 Stung by accusations about Lithuania’s complicity in the Holocaust, the Baltic nation’s foreign minister announced a series of measures aimed at bolstering its Jewish heritage during a concert at the YIVO Institute for Jewish Research.

The measures did little to allay the concerns of critics who had opposed YIVO’s decision to invite the minister to the September 22 gala in New York.

Dovid Katz, a former professor of Yiddish language, literature and culture at Vilnius University and author of defendinghistory.com, a website that is critical of the Lithuanian government, called the measures a “public relations ploy.”

Carl Rheins, a former executive director of YIVO, also was skeptical, particularly of a proposal to restore sections of the old Jewish quarter in Vilna, which was a major center of Jewish culture until it was wiped out in the Holocaust.

But Abraham Foxman, national director of the Anti-Defamation League, cautiously praised the “spirit and the content” of the address by Lithuanian Foreign Minister Audronius Ažubalis.

“They are still in the midst of denial, and as long as you deny, you can’t really come to grips,” said Foxman, who was raised in Vilna during World War II. But, he added, “if this is a first step of where it will go, that’s fine.”

YIVO’s invitation to Ažubalis to attend a concert of Yiddish music composed in the Vilna Ghetto was fiercely opposed by some Holocaust survivors and their advocates.

They accuse the government of whitewashing Lithuanian involvement in the deaths of 95% of Lithuanian Jewry. Before the war, about 200,000 Jews lived in Lithuania. Today, the community numbers about 3,000.

Writing in The New York Review of Books recently, Yale University historian Timothy Snyder said Lithuanians played a central role in the Lithuanian Holocaust. He said that during the first weeks of the Nazi invasion of the Baltics, Lithuanians killed 24,000 Jews in pogroms. They were also willing accomplices in the Holocaust that followed.

“The mass murder of the Jews of Vilnius could not have taken place without the assistance of Lithuanians,” Snyder wrote.

Joseph Melamed, chairman of the Association of Lithuanian Jews in Israel, was one of a number of critics who said Lithuania has sought to downplay complicity in the Holocaust since it gained independence 20 years ago.

He said the Baltic nation has also attempted to equate Soviet crimes perpetrated against Lithuanians with the mass murder of Lithuanian Jews. Foxman said he had resigned from a reconciliation commission in neighboring Latvia because of a similar issue.

“There are two tragedies,” he said. “But there’s no comparison.”

The crowd at the YIVO event received Ažubalis, who arrived late because of meetings related to the United Nations General Assembly, politely. Earlier in the event, the Lithuanian consul general, Valdemaras Sarapinas, read a statement on the minister’s behalf.

“My nation knows directly what it means to suffer from the horrors of totalitarian dictates, exile and executions,” Sarapinas said. “On the other hand, it understands how important it is to stay true to oneself and to admit the shared guilt for the shameful acts and moments of national history.”

Sarapinas announced that the Lithuanian government had committed to restore the Jewish quarter in the old city of Vilna and that it had approved about $270,000 to set up a Jewish library in Vilna. He did not respond to requests for clarification for details about the library.

During his talk, Sarapinas also expressed hope that a “YIVO studies room” would soon be established at the National Library.

“This event would mark the return of the YIVO institute to its roots in Vilnius,” Sarapinas said.

YIVO, once considered the scholastic center of Eastern European Jewry, was founded in Vilna in 1925. During World War II, the Nazis destroyed almost two-thirds of its collection of books and archives. Most of what remained was rescued and brought to New York. The remainder stayed in Lithuania, hidden during the next five decades of Soviet rule.

Since 1989, successive YIVO directors have fought for the remaining archives to be sent to New York. But YIVO’s latest executive director and CEO, Jonathan Brent, said he was about to open talks with the Lithuanian government that could lead to the establishment of a publicly accessible “YIVO room” at the Lithuanian National Library in Vilna, where the archive could be kept. He added that opening such a room would not preclude the return of the archive to YIVO in New York.

Rheins, who was executive director of YIVO from 1999 to 2009, said he opposed the idea of opening a special room in the National Library in Vilna.

“I believe those records should be returned to New York,” he said. “It’s always been YIVO property, and it’s not the property of the Lithuanian government.”

Rheins also criticized the Lithuanian government’s commitment to restore the Jewish section of Vilna as “inappropriate.”

“I’m very much opposed to the creation of this kind of Potemkin Jewish quarter in Vilnius,” Rheins said. “The Lithuanians are looking to what the Poles have done in Krakow in creating an ersatz Jewish quarter. It’s really just an effort to bring tourists to Lithuania.”

“We can’t be angry at them because they eradicate or forget,” Foxman said. Then, he said, when Lithuanians announce they want to commemorate a place, the Jewish community says, “You are doing this for tourism.”

Despite the controversy, the YIVO event went smoothly. When Brent hopped onstage before the final song to announce Ažubalis’s attendance, the audience applauded.

Brent said the evening had been a success. He added that many people had “completely legitimate fears and anxieties” about Jewish history in Lithuania and about the YIVO archive. Nevertheless, he said he would continue to work with the Lithuanian government to reach a permanent settlement.

“We need to do what is in the best interests of YIVO and of Jewish scholarship for the future,” he said.

Despite the controversy, the YIVO event went smoothly. When Brent hopped onstage before the final song to announce Ažubalis’s attendance, the audience applauded.

Brent said the evening had been a success. He added that many people had “completely legitimate fears and anxieties” about Jewish history in Lithuania and about the YIVO archive that remains in the country.

Nevertheless, Brent said he would continue to work with the Lithuanian government to reach a permanent settlement over the archive.

“We need to do what is in the best interests of YIVO and of Jewish scholarship for the future,” he said.