A Jewish Farmer Grows in America 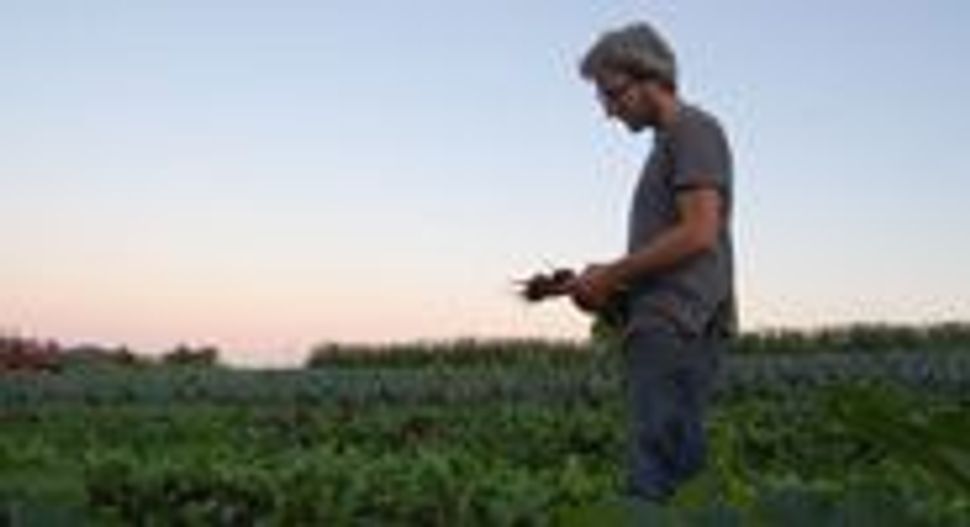 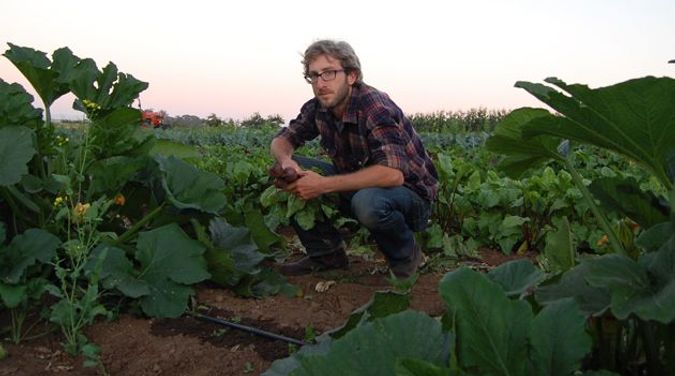 Changing Fields: Ben Harris left journalism and the life he had anticipated to become a farmer. Image by Weston Monroe

The first time I met an American Jewish farmer was at a falafel joint near the Yeshiva University campus in Manhattan in 2008. We were both killing time before the start of a panel discussion on ethics and kosher food by…well…eating.

He was an Ivy League grad, several years younger than I, and at the time I found him utterly bewildering. I simply couldn’t fathom why an educated Jewish kid would choose to eke out a living in farming. Asking outright why he, or anyone, would squander a fancy degree on such a low-prestige occupation struck me as overly blunt, but the question soon proved unnecessary.

Seven months had passed since a federal immigration raid at a Postville, Iowa, meatpacking plant had turned a harsh spotlight on labor practices in the kosher meat industry. That story would consume my journalistic life for a year and include two reporting trips for the JTA to Postville, the first just days after immigration police had descended on the town, sweeping up hundreds of undocumented workers and subjecting them to swift justice.

After the raid, earlier allegations of worker mistreatment — many of them first reported in the Forward — were leveled anew, along with a cascade of new charges against the company, including sexual coercion, child labor and drug production, the bulk of which were ultimately dropped. The controversy raised vexing questions about whether the millennia-old standards of kosher practice are sufficient to navigate the moral complexities of the modern industrial food system. The ongoing conversation about the modern ethical issues of kashrut became a cause célèbre of what some had begun calling the Jewish food movement.

At the time, this movement seemed to me like something for back-to-the-landers and urban yuppies craving organic goat milk and local arugula. Actual farming — as opposed to buying local produce or baking challah with heritage wheat — was something else entirely. It was brutish, unsophisticated and intellectually undemanding — or so I imagined. It wasn’t the kind of thing that should have attracted a smart suburban kid, someone from an aspiring Jewish family populated by doctors and lawyers, someone whose community had subtly reinforced the belief that the intellect (or the stock portfolio) is the only thing worth cultivating. Someone, in other words, much like myself.

But during the next two years, a disquieting feeling started to peck at me. Along with downsizing in the news media, journalism had grown into a noisy field in which blogging and punditry reigned supreme. And I, with my digital updates on everything from the latest vandalized gravestone in Eastern Europe to Playgirl’s former Jewish editor, came to fear I was adding to the clutter. The line between informing your readers and merely indulging them had grown blurry, but at various points I’m pretty sure I was on the wrong side of it.

And so, in the spring of 2010, I left my job, rented out my apartment, and, in a borrowed Mercedes powered by used vegetable oil, moved myself to a small organic farm run by a Jewish family in Vermont.

By day, we fed chickens and pruned tomatoes. Evenings we sipped cheap beer and played Low Bag, a farm version of limbo. At week’s end, we gathered on the porch with guitars in hand and welcomed in a Shabbat unlike any I had experienced before. Among the staples of those Friday sing-alongs was an English take on “Shalom Aleichem.” “Angels,” we sang, “come to our house.” Over and over and over. After a few minutes of this, it seemed I could actually sense their arrival.

What once seemed like social slippage, like a voluntary descent down the economic ladder, had become my life. The work was punishing for my 34-year-old body. During the course of that first summer, I managed to slice my hand on a metal shaving, bust my nose open with a blow from a socket wrench, and contract Lyme disease. My back hurt more or less constantly, and, despite vigorous effort, I could never manage to get my right index finger fully clean.

At various moments — particularly those when I was nursing various bodily wounds — I had to answer to myself, and to those close to me, what I was doing there.

Typically, my story began with Postville. In the constant retelling, it easily morphed into myth, becoming convenient shorthand for the way my food consciousness was galvanized by the misdeeds of a greedy industrialist. But that always felt a little too pat, and more than a little self-serving. More to the point, it was basically false.

Organic farming, for me anyway, has less to do with social justice, environmental stewardship and reconnecting to our lost agrarian heritage. An inspiring number of Jewish food and farming initiatives have spawned recently in response to just these sorts of concerns. While Postville had opened a window onto just how low we’ve sunk in our relationship to food, it wasn’t enough to spark a life-changing leap through it.

What really drew me to farming is the satisfaction of the thing itself. Compared to writing stories for a living, farming feels undeniably real. I’ve learned to manipulate real things — tractors, seeds and soil organisms — rather than just bits on a computer screen. The fruits of my labor can, literally, be touched and sniffed and placed in some hungry person’s mouth. The tangibility, and its obvious value, have become far more meaningful to me than the pleasures to be had cranking out the news.

In his 2009 book “Shopcraft as Soulcraft,” Matthew Crawford describes the virtues of this kind of work — the kind we do with our hands and not (just) with our minds — and the loss to the human spirit incurred by our tendency to devalue them. We depend on our cars, computers and iPhones, and yet, when they break, we’re as helpless as babies. Farming is a powerful antidote to that sort of alienation because it requires the competence to make something real and useful out of earth and water. And not just anything, but the most basic stuff of life. The impact of that is hard to overstate. What I once saw as work unbefitting a middle-class Jewish kid I’ve come to see as nothing less than redemptive.

I wonder sometimes what became of that farmer I met in Manhattan — whether he found his way to one of the exploding numbers of Jewish farming projects around the country, struck out on his own, or tried to and failed. What I struggle to understand is not why he set out on this path in the first place, but why so many others do not.

Ben Harris is an apprentice in ecological horticulture at the University of California, Santa Cruz.

A Jewish Farmer Grows in America