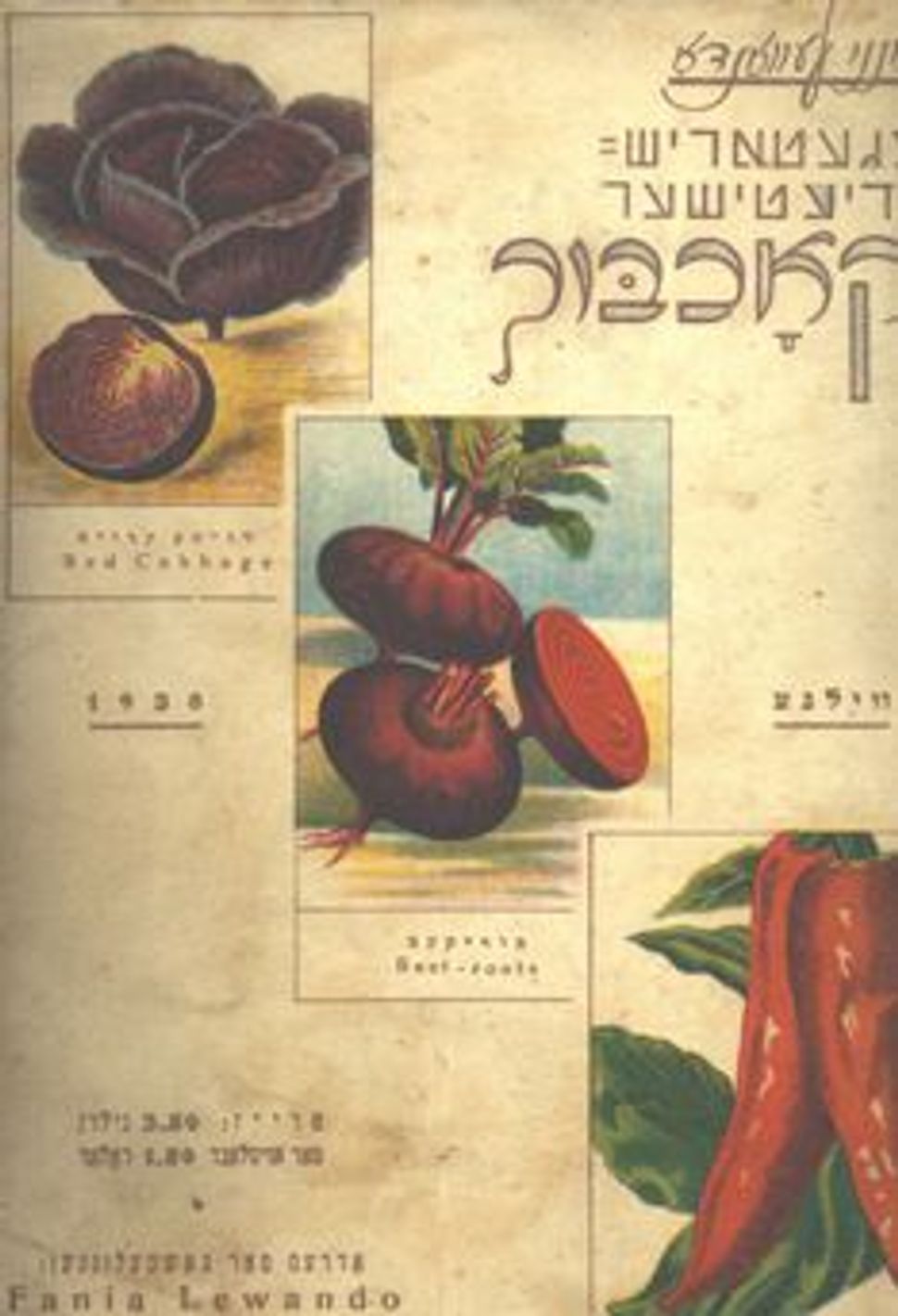 When most people think about the early high priestesses of vegetarian cooking, chefs and cookbook authors like Mollie Katzen, Deborah Madison and Madhur Jaffrey come to mind. Now, the YIVO Institute for Jewish Research in New York City is adding another name to the list: Fania Lewando. Next spring, YIVO will publish an English translation of Lewando’s Yiddish-language “Vegetarish-Dietisher Kokhbukh,” the “Vegetarian Dietetic Cookbook.” 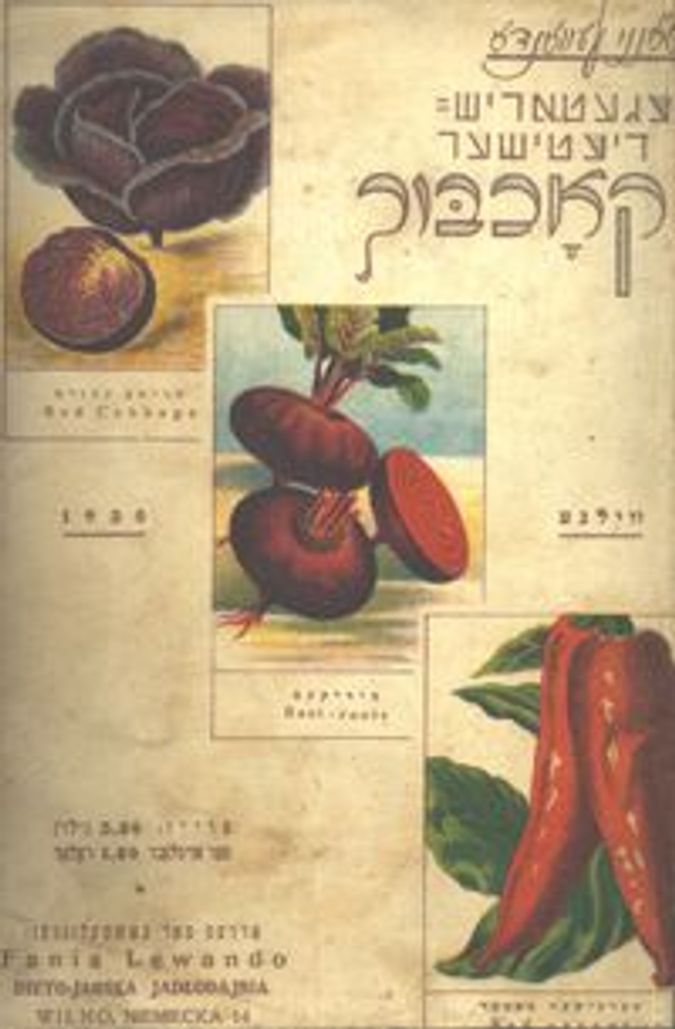 Originally published in Vilna in 1938, Lewando’s work is arguably the most ambitious, comprehensive Jewish vegetarian cookbook in existence. It contains 400 meat-free recipes, including Ashkenazi dishes like kugel and blintzes, and vegetarian adaptations of traditional meat dishes, like cholent and schnitzel. Lewando, who owned a well-respected vegetarian restaurant in Vilna frequented by distinguished locals from artist Marc Chagall to poet Itzik Manger, was also an imaginative and prolific recipe developer. Her cookbook also includes “exquisite, original dishes like pan-fried dumplings filled with sautéed mushrooms, vegetable-stuffed tomatoes, and rice with strawberries, which came directly out of her brilliant mind,” said Eve Jochnowitz, a Jewish culinary historian and the book’s translator.

Yet Lewando’s vegetarian lifestyle was hardly commonplace in the early 20th century. Then, as now, traditional Ashkenazi Jewish cooking favored meat — even cheap cuts simmered until tender — over anything green. As American cookbook author Jennie Grossinger commented later in “The Art of Jewish Cooking” in 1958, “Vegetables are comparatively unimportant in Jewish homes.” Lewando was certainly a crusader for fresh produce — but she was not alone. In the decades before World War II, America and, to a lesser extent, Eastern Europe flourished with small but robust pockets of Jewish vegetarian thought.

According to “Vegetarianism and the Jewish Tradition” by Louis Berman, the first modern Jewish writing on a meat-free lifestyle, “The Theory of Vegetarianism” by I.B. Levinsohn, appeared in 1884 in St. Petersburg, Russia. Vegetarian pamphlets, one rather pompously titled “The Torah of Vegetarianism,” and two short-lived Yiddish vegetarian journals were published in the United States around the turn of the century. Lewando’s cookbook, which stands out for its elegance and expansiveness, was predated by several shorter works by others like, the “Vegetarish Kokh Bukh: Ratsionele Nerung,” (“Vegetarian Cookbook: Rational Nutrition”), featuring an early recipe for veggie burgers bound with matzo meal and pine nuts.

In New York City, in the 1930s vegetarians — Jewish and otherwise — could dine at Schildkraut’s, a kosher-style restaurant chain (and later vacation resorts) run by vegetarian proprietress Sadie Schildkraut. In a 2007 article in the Forward, Jenna Weissman Joselit writes that Schildkraut’s “advertisements appeared frequently in the Yiddish- and English-language Jewish press extolling the virtues of Nutolin, Nutose and Protose….” — vegetable meats akin to those made today by Tofurky or MorningStar Farms.

Lewando and her contemporaries would be considered ovo-lacto vegetarians today, meaning they ate dairy and eggs, but no meat or fish. The justifications then for avoiding meat, like those today, were varied and complex. In America, they were likely influenced by the writings of 19th- and early 20th-century health and temperance activists like Sylvester Graham and John Harvey Kellogg, who believed that meat consumption led to physical ailments from indigestion to over-stimulation of the body. As historian Barbara Kirshenblatt-Gimblett wrote in an encyclopedia entry on cookbooks for “The YIVO Encyclopedia of Jews in Eastern Europe,” a 1907 pamphlet by N. J. Kvitner “stressed the health benefits of a vegetarian diet, including its value in preventing children from maturing sexually too early.” Lewando paired her recipes with essays about vitamins and hygiene (information that would, no doubt, be regarded with skepticism by today’s nutritionists), and an introduction that proclaimed fruits and vegetables healthier than meat.

Many other vegetarian enthusiasts were opposed to animal cruelty. Isaac Bashevis Singer, who famously turned vegetarian in his mid-50s, once said, “I did not become a vegetarian for my health, I did it for the health of the chickens.” And, in Yiddish, ”The Vegetarian Hymn” (Yes, there was one!) read: “Blessed be he who has the courage not to eat meat, not to spill blood! Blessed be he whose humane heart protects every creature from pain and suffering.” Additionally, many of these vegetarian Jews — a largely secular, politically oriented bunch — likely saw vegetarianism as a moral stand-in for the laws of kashrut that they had shed. “Although they no longer kept kosher, there was still a need for boundary and structure,” Jochnowitz, the translator, said. “Vegetarianism offered a combination of ethics and daily practice that filled that need.”

These early restaurants and cookbooks may not have made much of a dent in the Jewish community’s overall meat consumption, but the stirrings of a movement were evident. Today, 73 years after Lewando’s cookbook was first published, vegetarianism has joined mainstream society — making now the perfect time to translate the book (of which only a handful of original copies remain) and introduce it to a new generation. Jochnowitz, who has been a vegetarian for 30 years and is founder of the bilingual Yiddish food and recipe blog In Mol Araan, seems tailor-made for the task. “The minute I first saw Lewando’s book [in 1994], I knew I had to do something with it,” she said. “I immediately connected with her combination of tradition and innovation.”

The revitalized book, which will be published on Mother’s Day in 2012, will maintain Lewando’s confident, gourmet cooking style and the book’s gorgeous color illustrations of seed packets and vegetables, including beets, red cabbage, squash, onions, parsley, cauliflower and green peas. Jochnowitz does, however, plan to convert the recipes from their original metric measurements to imperial and adapt them for the modern kitchen and the contemporary palate. “She tended to cook vegetables a little longer than we would today,” Jochnowitz said. Even so, Lewando’s sophistication and flavor-focused approach to vegetarian cooking were at once timeless and ahead of their time.

Leah Koenig is the author of “The Hadassah Everyday Cookbook” (Rizzoli, 2011). Her monthly Ingredients column on food appears in the Forward. Contact her at [email protected].

2) Grate one small carrot, one small parsley root and one small celery root. Sauté the grated vegetables in oil.

3) Mix everything together and fill the empty tomatoes. To serve, sprinkle with dill and scallions, and surround with fresh lettuce.

From the “Vegetarian Dietetic Cookbook” by Fania Lewando, translated by Eve Jochnowitz