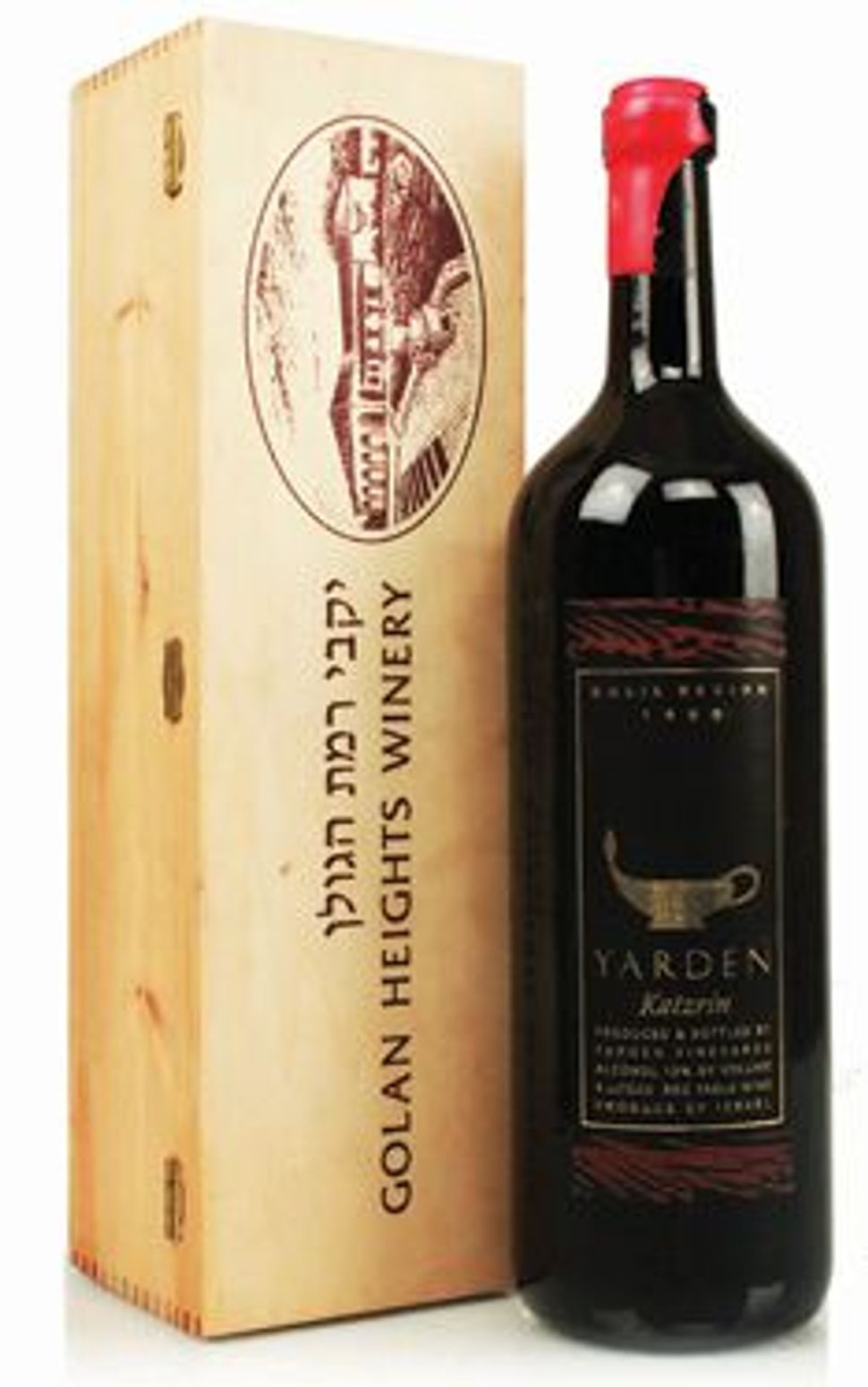 For the past three years, auction prices for mainstream wines, especially those from famed Bordeaux chateaus, have been on a roll. Energized by deep-pocketed Asian collectors, the prices of top wines, led by Chateau Lafite Rothschild, have well outpaced the U.S. stock market.

One evening in late September, it was the turn of kosher wines, still very much a niche category, to try to get in on the action. Kestenbaum & Co., a New York-based Judaica specialist, offered 123 lots of Israeli, American, Spanish and French kosher wine in a sale at the Roger Smith Hotel in Manhattan. According to the catalog, it was the first-ever auction devoted to kosher wines. Kestenbaum partnered with Skyview Wine & Spirits of Riverdale, N.Y., the country’s largest kosher wineshop, for the event, attended by about 50 people.

Going Once? A bottle of the first ?serious? Israeli table wine, estimated at $2,500 to $3,000, failed to sell. Image by kestenbaum.net

“No matter if we do magnificently or if we bomb, I assure you that we will be back in the spring to do a second kosher wine auction,” said Daniel Kestenbaum, chairman of the auction house.

Sadly for Kestenbaum and serious collectors of kosher wine hoping to see their cellars gain value, this inaugural auction was more bomb than dazzle. Almost three-quarters of the lots went unsold, and bidding was tepid for those that did find buyers. And yet, not all was gloom. For some Israeli wines that did sell, the bar was raised, calling attention to their rising quality. A case of a dozen bottles of Yarden Cabernet Sauvignon 1999 estimated at $1,200 to $1,500, for example, sold for $1,230 — a heady premium over the release price of about $200 per case.

The star of the auction was a double magnum (equal to four regular bottles) of another Yarden red, the 1990 vintage of Katzrin, the top label of the Golan Heights Winery, produced only in select vintages. This “torpedo” (as some call the oversized bottles) sold for $3,883, a stratospheric price for an Israeli wine. Another double magnum, this one of Barons de Rothschild Bordeaux vintage 1989, sold for $615. While the Rothschilds have been making wine since the mid-19th century, Golan Heights Winery is a relative newcomer whose first wines were not marketed until 1984. Apple orchards were ripped out to plant the vineyards for their first wines.

Yarden was the most successful of the triumvirate of the most prestigious Israeli wines at this auction, with seven lots sold for a total of $12,424. Of nine lots of Domaine du Castel, a pioneering premium winery in the Judean Hills, and three of Yatir, a boutique offshoot of Carmel, Israel’s largest and oldest winery, only three found buyers for a total of $2,584.

The idea for the auction arose about a year ago: “It seemed like a kosher wine auction might be a logical step for a company dealing in Judaica,” said Abigail Meyer, Kestenbaum’s marketing director. “The rare books thing is not being picked up so much by the 30-year-olds. Unlike their fathers, who are our clients, they aren’t necessarily interested in the Venetian Talmuds … but wine is young and social.”

Dan Rabinowitz, a Maryland-based lawyer and youthful kosher wine collector said, “With the Israeli boutique winery scene really exploding, I felt it was time to showcase the best of these wines.”

He said, “The quality and the collectors are there, and this auction was a way to open up the secondary market [of older wines, no longer available at retail].” Most of the consignments came from private collectors, but some wines came from the cellars of wineries in Israel and California. 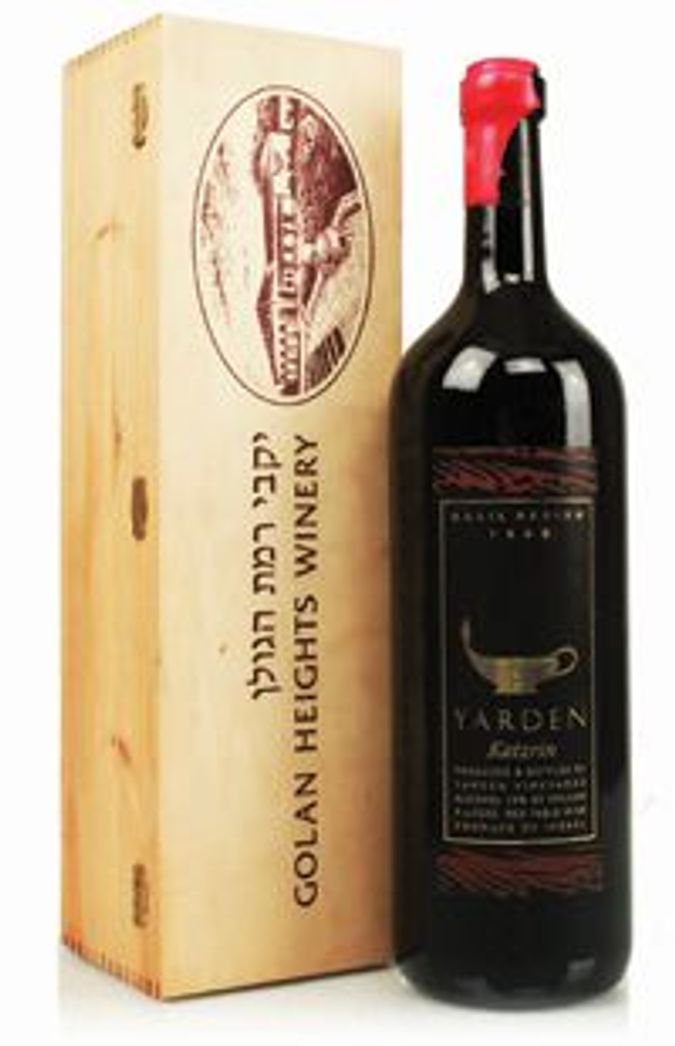 Torpedo: This double magnum bottle of Israeli wine was the top seller. Image by kestenbaum.net

A historic oddity offered at the auction was a single bottle of Carmel Cabernet Sauvignon Special Reserve 1976, considered to be the first “serious” Israeli table wine. The wine was made in an untraditional way. No small oak barrels, in which fine Bordeaux-style wines are traditionally matured, were available for wine making at Carmel Winery in the 1970s. So, Carmel’s head winemaker at the time, Freddie Stiller, purloined a supply of small barrels meant for brandy, which the winery produced in abundance. The best of Carmel’s grapes went into that Special Reserve, which quickly gained respect among discerning wine lovers. It was the first of Israeli wines to age well. In an era when most Israeli wine was sweet, it was a dry, complex wine capable of aging well. “I remember the shock of surprise when people tasted that wine,” said Adam Montefiore, wine development director for Carmel. “It was a freak. It drank well for 20 years and it was a remarkable wine. Today, I’m sure that it’s turned to vinegar.”

That bottle of Special Reserve 1976 carried an estimate of $2,500 to $3,000 at the auction. It failed to find a buyer willing to meet the minimum bid.

Two Carmel lots that did sell, and are unlikely to be vinegar, were six-bottle cases of Kerem Ben Zimra Single Vineyard Cabernet Sauvignon 2002, a still rich and chocolaty wine. One lot, estimated at $300 to $500, was bought for $308 by Miriam Morgenstern, associate publisher of Wine Spectator Magazine. “This was the wine served at my son’s bar mitzvah,” she said. “How could I not buy it?”

Other wines, participants said, were purchased for a special Rosh Hashanah meal. The most expensive bottles, such as that $3,383 Yarden Katzrin 1990, are likely to be cellared as an investment.

By the end of the auction, only 33 of the 123 lots had found buyers. Why had so many gone unsold? Overly aggressive estimates may have been largely to blame. But another problem was that no track record exists for auction prices of kosher wines, unlike fully pedigreed French wines, for which extensive auction records and critical ratings are available.

The greatest wines of Bordeaux can last a century or more, adding enormously to their auction value. If the best current kosher vintages turn out to have a fraction of that staying power, their prices are bound to rise.