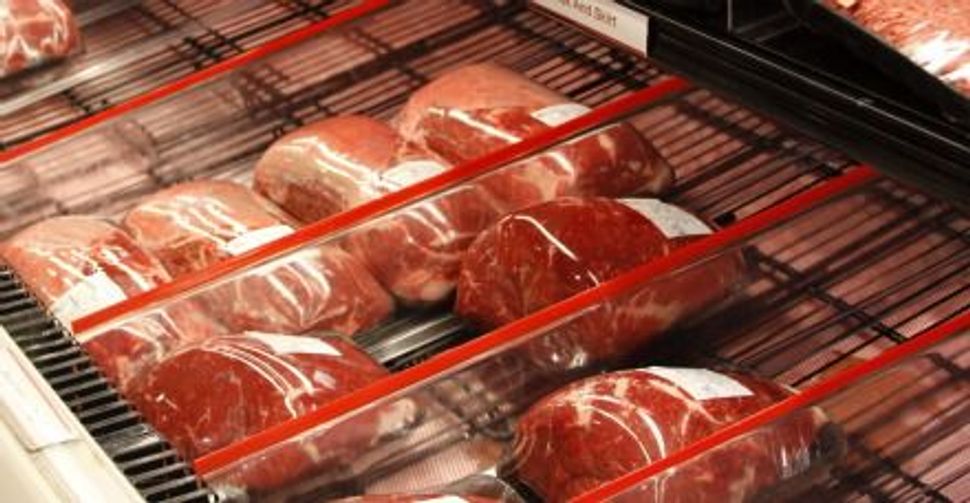 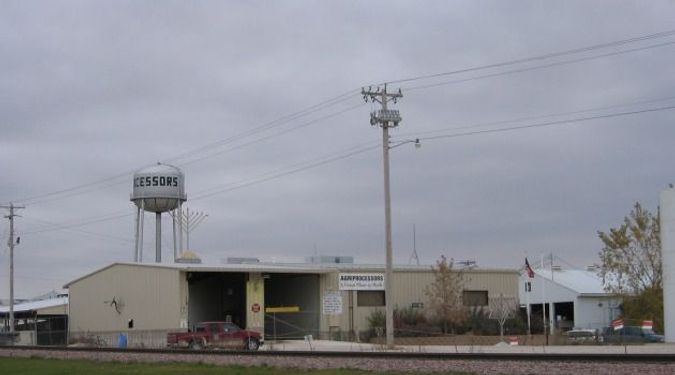 Agriprocessors’ 2008 kosher slaughter scandal provoked solemn vows of reform among producers of glatt kosher meat in the U.S. But despite some industry improvements, America’s leading kosher certification authority continues to authorize the sale of millions of pounds of glatt kosher beef slaughtered by means that animal welfare experts condemn as inhumane, a Forward investigation has found. 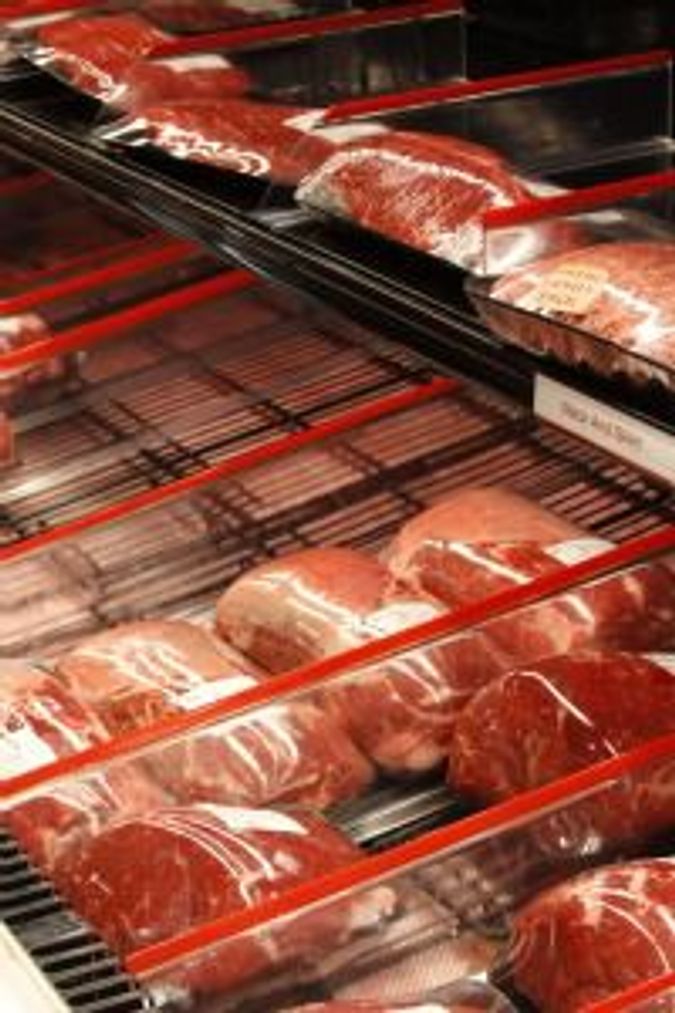 Is This Kosher? Meat certified as kosher is being slaughtered overseas using techniques that many consider inhumane. Image by shulamit seidler-FELLER

The questionable practices occur in South and Central America, where the primitive slaughter method known as shackle and drag is used in factories that supply American glatt kosher distributors.

Though the Orthodox Union, the country’s largest kosher certification agency, has said that it objects to the practice, it has continued certifying meat produced by this method despite years of public criticism. O.U. officials say they must also take into account the impact that banning import of such meat would have on beef prices.

But some animal rights activists are now calling the huge kosher certification agency to account.

“Years of inaction have demonstrated that the O.U. is, in fact, complicit in this abuse” despite rhetorical opposition to these practices, wrote Hannah Schein, manager of undercover operations for People for the Ethical Treatment of Animals, in an e-mail to the Forward.

Beginning in 2004, successive investigations by various groups, government agencies and media outlets, including PETA and the Forward, revealed a pattern of mistreatment of animals and workers at the Agriprocessors plant in Postville, Iowa. An infiltration of the plant by undercover PETA operatives found that cattle were allowed to struggle on the floor for up to three minutes after their throats were cut.

Agriprocessors filed for bankruptcy in November 2008, months after a massive federal immigration raid on the plant. Meanwhile, religious groups and activists called for reform in the kosher slaughter industry.

Three years later, some practices have improved at the kosher plant that was at the heart of the controversy. But other practices that kosher officials call problematic continue, both at the former Agriprocessors plant and elsewhere in the industry.

For more on current practices at Agriprocessors, see related story.

Observant Jews in America generally seek meat slaughtered under the glatt kosher standard, which has effectively replaced the less stringent non-glatt as the religiously acceptable certification for kosher beef in the United States. The O.U. has not certified non-glatt beef since the 1980s, and while mass producers like Hebrew National continue to produce kosher beef that is not glatt, they do not cater to the observant Jewish market.

Most experts agree that three major firms sell the lion’s share of glatt kosher beef in America. Two of them, Agri Star Meat and Poultry based in Postville, Iowa, and Minnesota-based Noah’s Ark Processors Corp., own their own slaughterhouses in the United States; the third, Maspeth, N.Y.-based Alle Processing, rents time at a slaughterhouse in Illinois and imports frozen beef.

It’s largely that imported frozen beef that has animal rights advocates up in arms.

No meatpacking plants in Central and South America certified by the O.U. to supply glatt kosher beef to the United States use upright pens — the humane gold standard — to slaughter cattle, according to Rabbi Menachem Genack, rabbinic administrator of the O.U.’s kosher division. American abattoir certified by the O.U. use upright pens almost exclusively.

The slaughter methods used in Central and South America, on the other hand, have been all but banned from American glatt kosher plants.

“It’s not the system we recommend or have been advocating,” Genack said of the Central and South American plants’ practices. “There’s an attempt to wean [the Latin American operations] away from the system, which is what we would like. It hasn’t happened yet.”

“I know it’s a long period of time, but we’re juggling,” Genack said. “There are competing considerations here. It’s quite easy to say, ‘Why don’t we just cut out South America?’ But it would represent a disruption of supply and inevitably would mean kosher meat would go up higher in price. We’re trying to supply a modest cost for struggling families. That’s the whole concept behind the O.U.”

Genack acknowledged that the Central and South American plants’ use of the controversial shackle and drag method of slaughter was problematic. In this process, the cattle’s legs are bound and the animals are flipped onto the ground before the shokhet, or ritual slaughterer, cuts the animal’s throat.

The method is used in part because these Latin American plants ship most of their product to the Israeli beef market, and kosher guidelines enforced by the Israeli Chief Rabbinate require cattle to be inverted during their slaughter. The inverted position of the cow is thought to keep the animal from pushing against the slaughterer’s knife. Excessive pressure exerted by the cow or the shokhet would make the kill unkosher.

The upright pens used in the United States are considered by animal welfare experts to be far more humane than other methods. They keep the animal standing during the slaughter, and secure their heads to keep them from applying pressure to the knife.

In the shackle and drag method, “they’re just dragging them out of a box and holding them down on the floor with five guys on top of them,” said Temple Grandin, a humane slaughter expert whose innovations in animal handling have been adopted industrywide.

An article published by Grandin on her website calls the shackle and drag method a “serious problem” and indicates that a slaughterhouse using the method would fail an animal welfare audit.

Central and South American plants also use the better-known shackle and hoist method — a practice outlawed in the United States since 1958 — though there are signs that this practice is declining.

Both shackle and hoist and shackle and drag are thought to be more dangerous for slaughterhouse workers than the upright pen.

In 2000, the Committee on Jewish Law and Standards, the highest authority on Jewish law in Conservative Judaism, unanimously ruled that shackle and hoist is a violation of Jewish laws against cruelty to animals and unnecessary risk to human life.

It’s impossible to know exactly how much glatt kosher beef is imported from Latin American plants that continue these problematic practices.

An extensive search using the paid online database Import Genius, which catalogs all shipboard deliveries into the United States, revealed that Alle has imported nearly 30 million pounds of frozen beef from Latin America since 2006.

Imports by the firm have remained relatively steady over the past five years, with the exception of a huge spike in imports in late 2008 and the first half of 2009, when the Agriprocessors plant went offline. Over the past 12 months, Alle has imported at least 850,000 pounds of beef.

Most of that meat has come from two plants: Frigorifico Las Piedras, in Uruguay, and Centro Internacional de Inversiones S.A., in Costa Rica. An official at the Uruguayan plant would not comment on the plant’s slaughter practices; an official at the Costa Rican plant missed a scheduled interview without explanation and did not respond to a subsequent attempt to contact him.

Sam Hollander, Alle’s owner, also did not respond to a request for comment. His firm sells processed and frozen beef under its Mon Cuisine and Meal Mart brands, and also sells kosher meat to airlines under its Schreiber brand.

Although no other kosher firms were listed in the Import Genius database, that database would not include beef sent into the country by truck or train and would miss imports delivered to intermediary companies contracted by the kosher firms to facilitate the delivery process.

In a statement, Agri Star said that all the meat used in its “fresh meat operation” is processed locally, but a spokesman would not say whether that applied to its frozen and processed meat products.

Genack maintained that kosher standards in the Latin American slaughterhouses are controlled by the Israeli Chief Rabbinate and practices at the plants are ultimately outside the purview of the O.U. Genack said that he had spoken with Yona Metzger, Israel’s chief Ashkenazi rabbi, about the Latin American plants as recently as this past summer.

A spokesman for Metzger, Avi Blumenthal, said that Metzger opposed shackle and hoist, but he could only request change and not enforce it, as the matter is “not connected to kashrut.”

Blumenthal claimed that the vast majority of glatt kosher beef shipped to Israel from Latin America came from plants using high-tech inverting pens, which flip the cows upside down and are considered more humane than the shackle and drag method. But Blumenthal’s claim puzzled Genack, who said that the O.U. is unaware of any inverting pens in use in Central or South America.

“I don’t understand what they’re referring to,” Genack said. The Israeli Chief Rabbinate’s kashrut authority certifies more slaughterhouses in Central and South America than the O.U., and Genack said it was possible that the inverting pens were being used in places where the O.U. had no presence. But he said, “If an [inverting pen] was in the slaughterhouses that we were at and they were using it, we’d be using it, as well.”

In fact, some progress appears to have been made. Genack said that a plant in Mexico which he would not name is now using the more humane upright pen for beef imported by Alle.

But according to Genack, that progress has not reached the Uruguayan and Costa Rican plants.

The Latin American cattle are grass fed, in contrast to grain-fed American cattle, and some argue that the Latin American animals have an overall better quality of life. But Naftali Hanau, founder and CEO of Grow and Behold, which sells pasture-raised beef and poultry from North American farms, said he isn’t so sure. “They arguably do have a better life than a typical American feedlot cow,” Hanau told the Forward. But “when you factor in the end of the line, when it comes to transportation and handling and being slaughtered through a system that is arguably more inhumane, it’s a question of values. Personally, I’m not going to buy that meat.”